trade bait from the card show

It feels a little irresponsible of me soliciting trades seeing as I've been dragging my feet getting cards into the hands of people I owe (such as Bo, GCA, Kerry, Shane Katz), plus building "CDs & Cards" boxes for N.O. and Chris the Collector, plus a big simmering trade in the works with Bubba and other outgoing-cards activities I need to spend time on.

So I might not be super quick getting trades turned around, but hey, here are some card show pickups that are up for grabs. Check out my wantlist and get in touch if you want. If you're a frequent trade buddy of mine, feel free to ask me to set any of this aside for you. 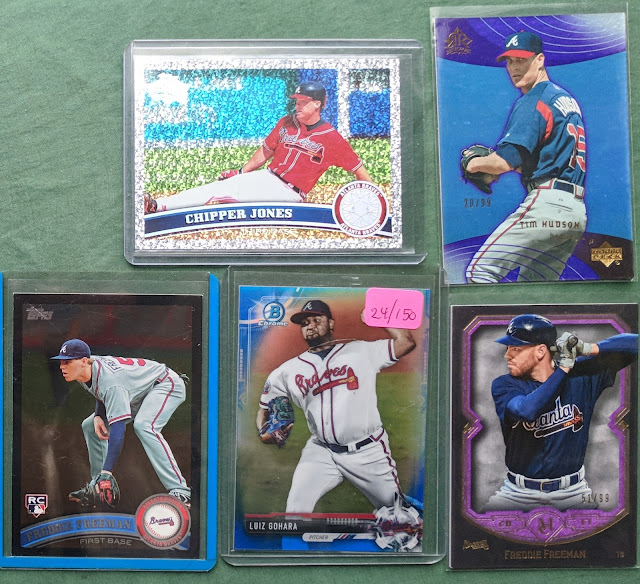 It bothers John Miller if I don't post any available Braves, so here're some, including a couple 2011 Topps parallels I didn't end up needing.

Cubs, including a Fergie in an attempt to lure Twitch into a trade.

Truth be told, the Chris Davis parallels were from the previous card show. I tried to line up the purple with the Yan Gomes card. 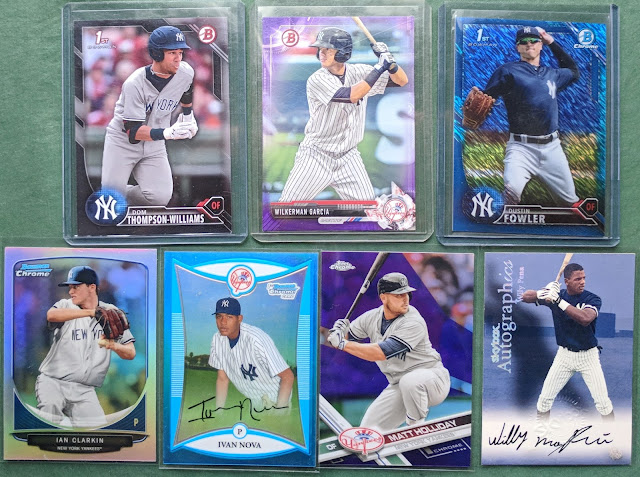 A bunch of Yankees, including a Willy Mo Pena autograph.. seems he nearly made a comeback with the Indians in 2017, but returned to Japan instead. 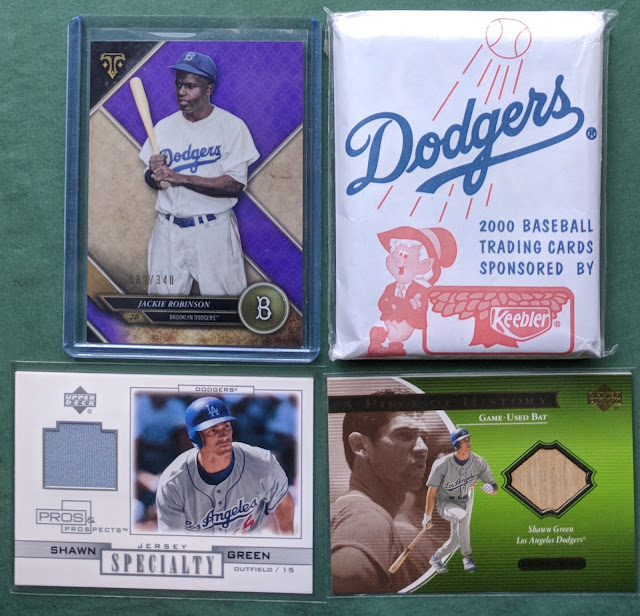 Dodgers. That Jackie Robinson was in yesterday's post of keepers, but I fight the urge to collect him, so hopefully someone takes it from me. I love Jackie, don't get me wrong, but you can't collect everybody, and if I went down that rabbithole I'd want to land some playing-days vintage, and that could get dangerous.
The 2000 Keebler bag was the complete set. Hated to do it, but I had to pull out Sheffield and Adrian Beltre for my PCs.
I know Night Owl already has more Shawn Green relics than he needs, but maybe someone else would want them. 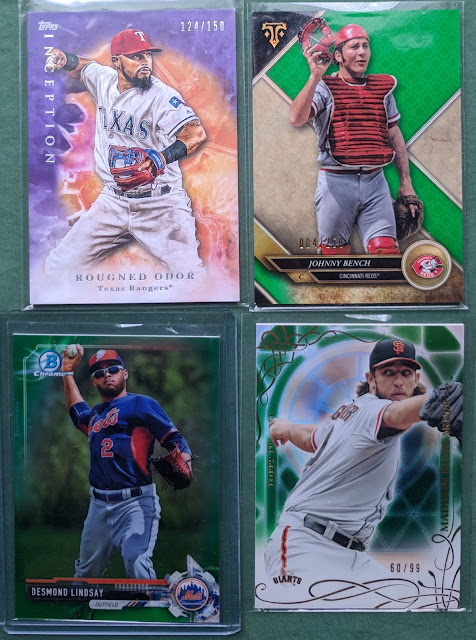 Johnny Bench is another all-time great I fight the urge to collect. Sometimes in my weaker moments, I even consider putting my Madison Bumgarner cards together. 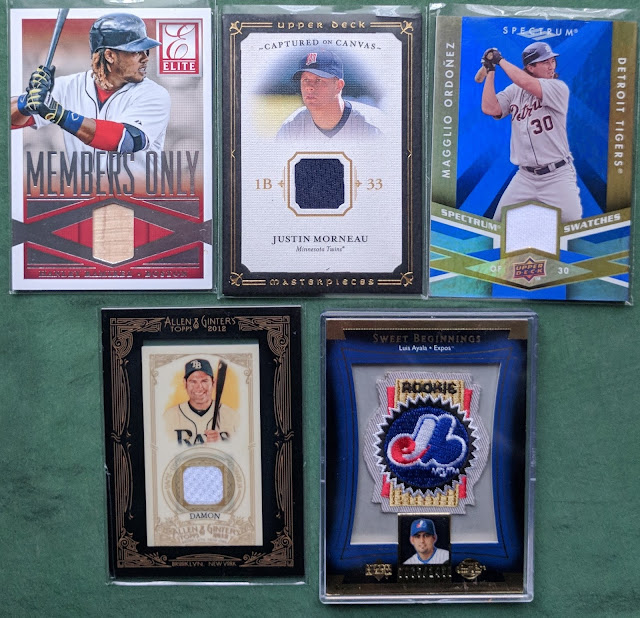 More memorabilia cards. The Johnny Damon has a dinged corner. I'm not really familiar with Luis Ayala, but thought the Expos manupatch was cool. 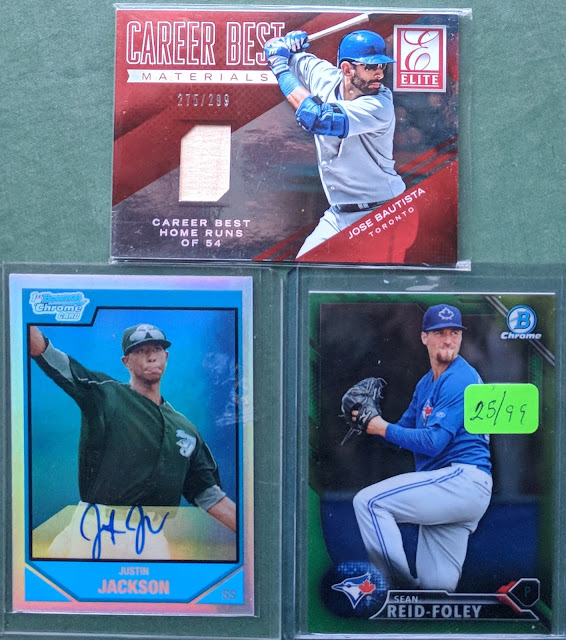 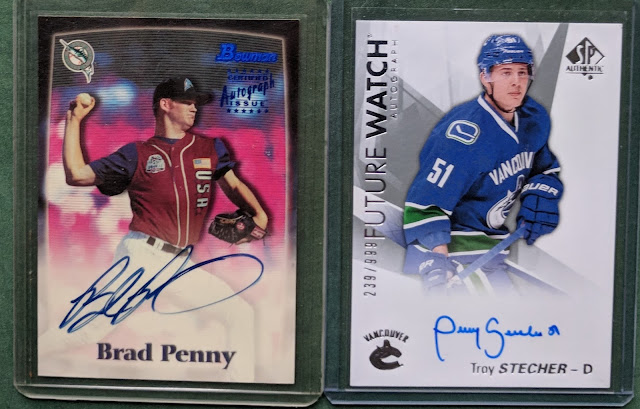 Finally, a couple more autos. Brad Penny helped the Marlins win the World Series in 2003 and went on to have a couple All-Star seasons with the Dodgers. I don't know anything about Troy Stecher, but just took a flyer on a hockey guy in case somebody could use it.

So there's some trade bait. Nothing super enticing, but if anything caught your eye and you wanna work out a trade, just let me know. There may have been a few more pickups already set aside for folks (a few Pirates, maybe a couple Rynos, etc). This wraps up the November card show haul (pt 1, pt 2, pt 3).. thanks for following along!

And before I end this post, allow me to pay my respects... 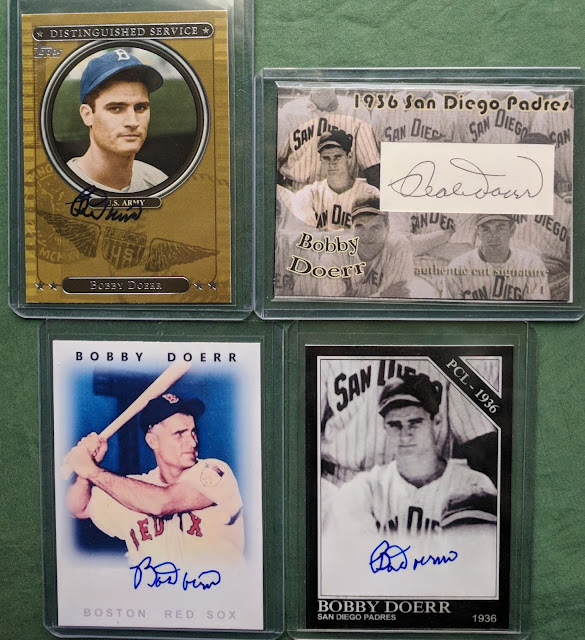 I was sad to hear about the passing of Bobby Doerr this week at 99. He really was the patron saint of through-the-mail autographs. Just a great guy who brightened the day of countless card collectors over the years. Though he lived a full life, just shy of a century, it's still a bummer he's no longer with us. First, I got that Distinguished Service insert signed. Then I whipped up a Padres custom cut-signature card using an index card I got cheap on eBay (I realize it's silly to pay for his autograph when he's so generous with it, but I suppose it's nice to have an earlier, smoother signature from him.) Then I got those couple customs signed, two of my all-time favorite TTM returns. I really love how they turned out. Thanks again, Bobby! Rest in peace. 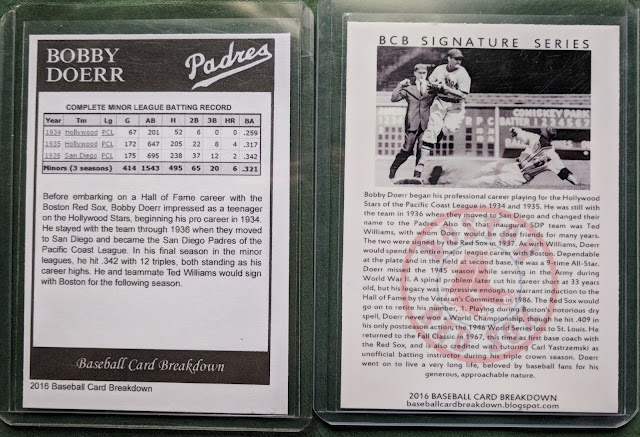