Fulfilling the prophesy with Collecting Cutch 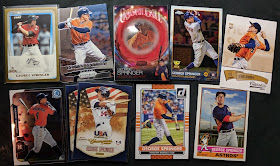 Wow, hell of a Series, huh?! Congratulations to the 2017 World Champion Astros. During Game 7, I was compelled to dig out what George Springer cards I could find in my collection. I'm sure there are a few more left to uncover in there as well. I knew I had that 2015 Stadium Club Crystal Ball card-like-thing, but having a gold parallel of his 1st Bowman Card was a pleasant surprise. I might have to start up a little PC for the reigning World Series MVP. As you probably heard, his 5 dingers tied Reggie ('77) and Utley ('09) for the record. Seems like a good dude, too.

Switching gears...
I'm always looking out for good deals on interesting Pirates cards, because you never know when Bob Walk will strike, and I like to be ready with return fire. But a while back, I caught wind that Brian at Collecting Cutch considered Charlie Morton one of his top PC guys. I took a look in my Pirates booty, and sure enough, I had a 1/1 Charlie Morton mini snagged during a Topps Vault sale. Brian has been generous with me in the past, so I surprised him with it plus a couple McCutchen customs I had been meaning to toss his way.

But where it gets impressive is what Brian wrote about the cards I sent in a blog post dated September 12, 2017: 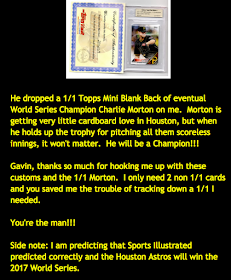 Wow! Nice prediction there, Brian! As we know, Houston did in fact win the 2017 World Series these several weeks later. And wouldn't you know it, Charlie Morton was on the mound picking up the win as he closed out Game 7. Congrats on that!

Anyways, here are some cards he sent me in return. 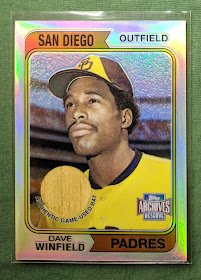 The star of the show was this gorgeous Dave Winfield bat relic. This is a double bulls-eye for my collection, because not only is Winfield one of my top PC guys, but I'm also slowly working on an Archives Reserve Master Set. Very happy to have this fall into my ARMS! 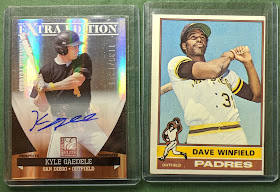 Big Dave makes another appearance, this time on his classic '76 Topps card. Cool Padres prospect auto, too. I'm not familiar with Kyle Gaedele, but let's look him up. Well, he topped out at AA, then had a solid 2016 for an Independent team, and apparently didn't play anywhere in 2017. 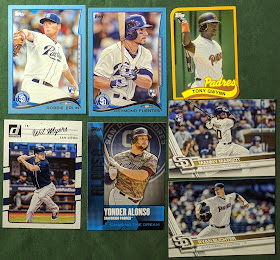 A few other miscellaneous Padres along for the ride. 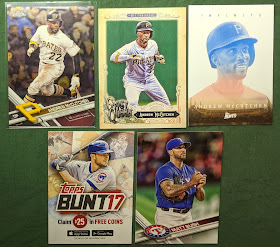 And a few more cards, highlighted by a nice trio of Cutches.

He told me there's also one more card with my name on it, a sweet Padres Pantheon card that didn't arrive in time for inclusion in this package, so that should hopefully show up soon. Plus I won another recent contest of his, so I'm also looking forward to that prize arriving. Generous guy, that Collecting Cutch!
defgav at 3:00 PM
Share