Just to recap, this Flagship Binder will feature a page per year from '51 Topps thru '94 Topps, though I'm still working on it and not all pages are full yet (and even if full, I'll switch out cards as I feel like it), and I'll probably eventually expand the project for other brands and years. These are cards that don't really fit in my collection elsewhere (such as in sets or PCs), and are therefore potentially trade fodder if push comes to shove. Ideally each page will be full of "good cards" though at the moment there are still a lot of commons, but that's fine.

Last post on this subject ended with the year 1960, but I'm gonna start with a slight re-do of that year for this post. 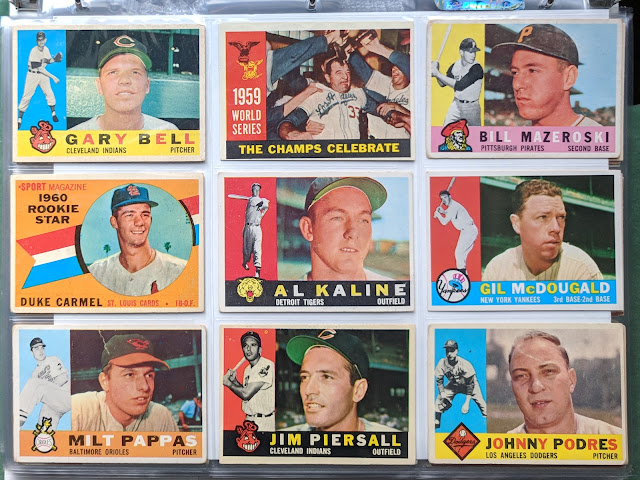 Spot the update? Yes, It's got a nice Mr. Tiger center-square now. Forgot I picked this card up in lot a little while ago. I like Al Kaline alright, but have decided not to PC him, meaning he's fair game for this project. 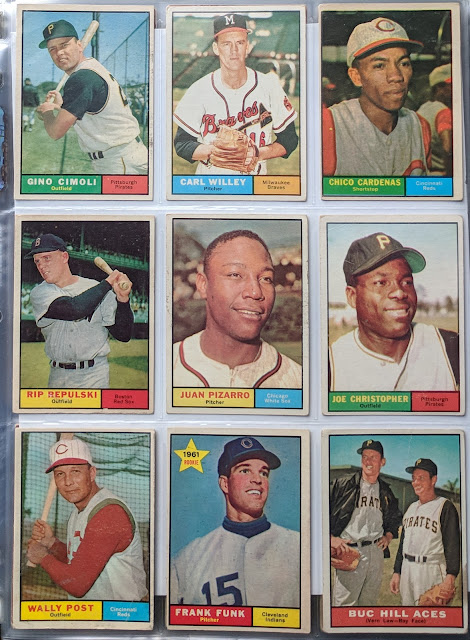 1961 Topps has a full page, though not really any big names here, so these guys are all potentially upgradable. My fav is probably Frank Funk just because of the rookie star and his funky name. 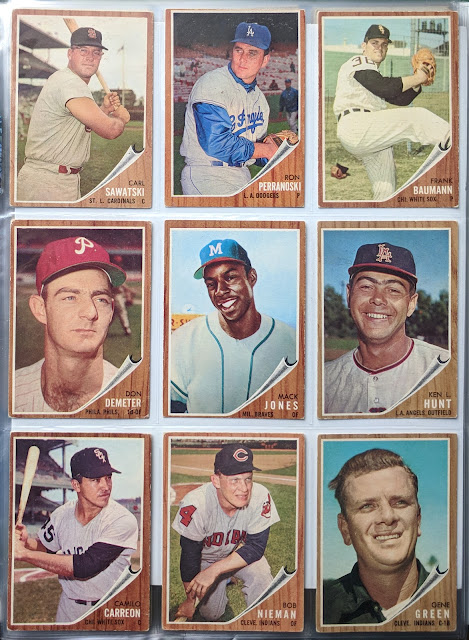 1962 again has a full page but not a lot of starpower. My favorite card of the page is probably Mack Jones, one of the few "painted cards" in the set. 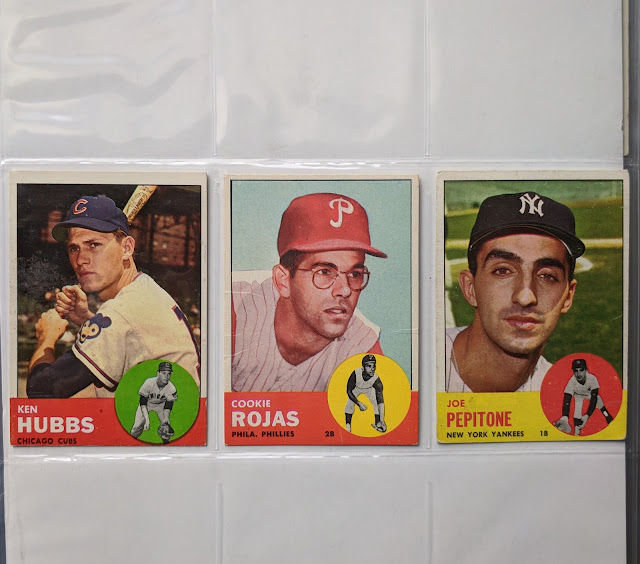 1963 is the least-represented 60s set in my binder. Only 3 cards, 2 of which I only just picked up at the latest local card show. But at least all these are notable, in my book. You've got Ken Hubbs (sadly best remembered for his tragic death at age 22), a Cookie Rojas rookie, and Joe Pepitone. Pepitone is a guy I'm fascinated by but haven't pulled the trigger on officially PCing, so he pops up a few times in the binder. 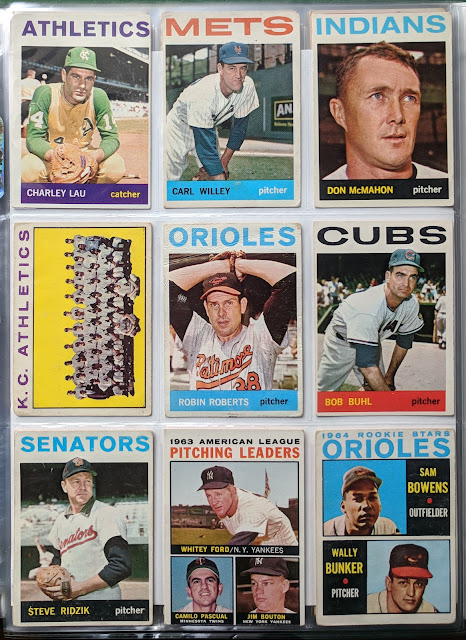 Back to a full page in 1964. This is a set I'm working on, meaning these are all dupes. Not a lot of big names here, but you've got HOFer Robin Roberts (I've got 3 copies of this card.. one for the set, one for the PC, and [the worst conditioned] one for the flagship binder), plus a League Leaders with Ford and Bouton. But the rest are on the bubble as far as getting bounced in the future. 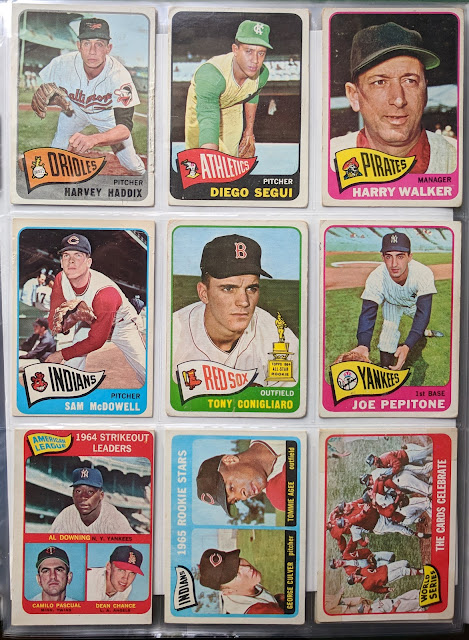 Another page of dupes, as I've completed 1965 Topps. I think this is a pretty solid page, with some notable guys all around. Tony Conigliaro gets center-square with the glorious all-star rookie trophy. He is another name who pops up multiple times in the binder. 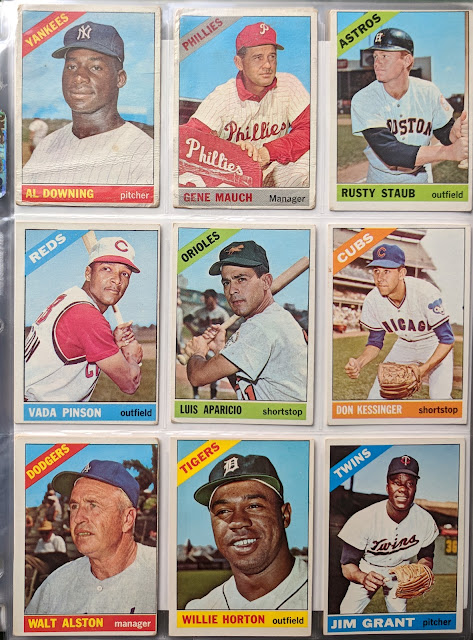 1966 fields a very strong lineup, with pretty much all these guys being All-Stars, if not HOFers. Condition-wise, the wrinkled Downing and Mauch could be bumped before long. 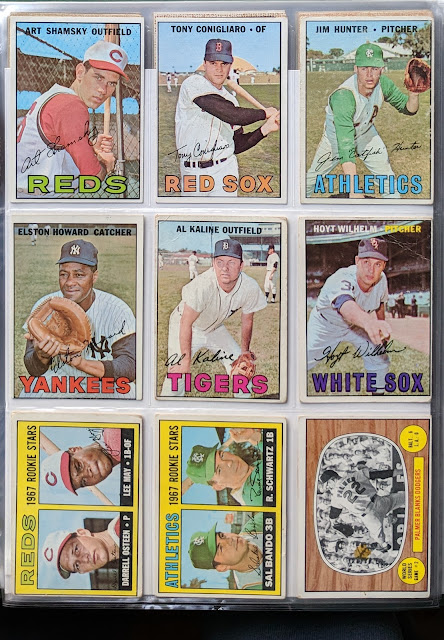 1967 is also a solid page. All these cards feature players that are household names to fans of the era, with four Hall of Famers and rookie cards of Lee May and Sal Bando. 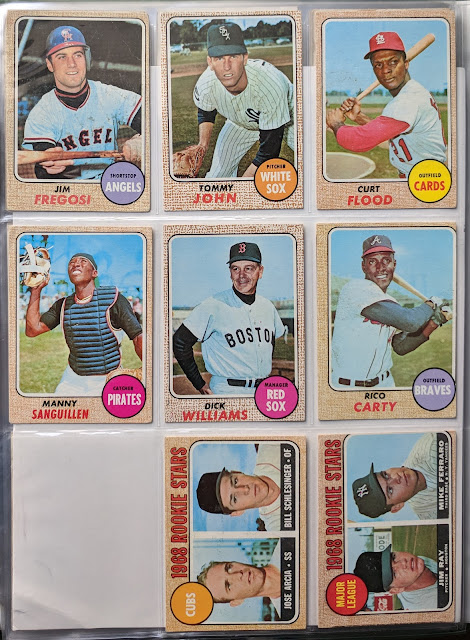 1968 is OH SO CLOSE to filling a page, but I'm one card short. Otherwise, the page features some good names, though the rookie cards here ain't no Bench and Ryan, that's for sure. 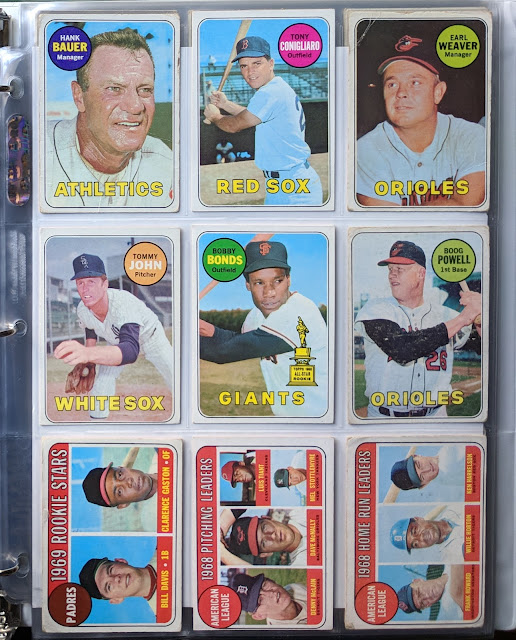 1969 however is solid all the way through. Conigliaro makes yet another appearance. That's Earl Weaver's rookie card. And the Bonds RC with the trophy looks great in the middle. Clarence (Cito) Gaston lead the Blue Jays to their back-to-back titles in the early 90s. 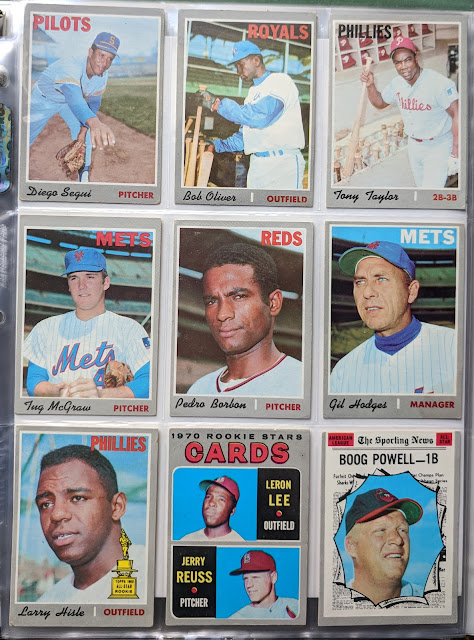 And we finish the post with 1970 Topps. HAVE to include a Seattle Pilots card with any selection of 1970 cards. And the set is known for its gorgeous bat-rack cards, two of which I've got here. Then you've got a couple Miracle Mets and a card with a "cock" cartoon on the back (Borbon likes cock fighting), another rookie trophy, a Jerry Reuss RC and a Boog All-Star. Solid page! I'd hate to think who I would bump from it.

That'll do it for now. Feel free to send me any '63 Topps cards and a '68 so I can complete those pages. I'll be delving deeper into the 70s section of the binder in a future installment.
Posted by defgav at 3:24 PM