Portland's monthly card show is this weekend. And it looks like they've expanded it to both Saturday and Sunday now, not just Saturday like it's been in the past. Oh wow, they even redid their website all "professional" with cookies now and everything, upgrading from the old GeoCities-grade webpage.

Gotta admit I have zero interest in making it to this month's show, or next month's, or the show after that. (Well, maybe not zero, but like a 1 or maybe 2 on a scale of 10.)

I've been hitting the "collection organization" / "card room optimization" hard the past few weeks and hate to say it, but I think it's beneficial to not have that stream of new cards coming in every month. I'd always come home with a tall stack of cards that needed to be sorted which would always slow down my overarching push to get my collection under control. And cutting that out for the past year and a half has helped with my progress. Hopefully a year from now, I'll have my card room just how I like it, and the inevitable MLB work stoppage/strike will help pop the trading card bubble, and then maybe I'll feel like returning to the card show.

But for now I'm doing just fine with collection-focused online purchases and the occasional cardsphere PWE. Hey, let's take a look at some such cards now! 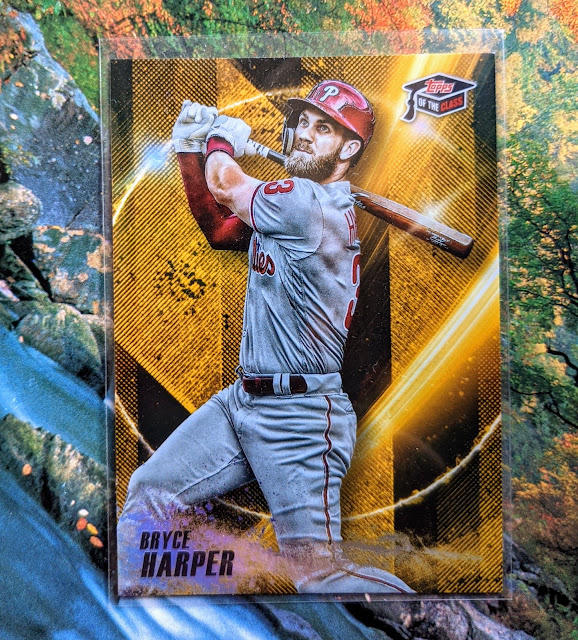 I thought this was a cool looking Bryce Harper that was in a recent PWE Trade Bait post from the Quarry. Looks like a perfect circle chemtrail from his mighty swing. Neat! (Yeah, I don't know how he swung behind himself, but it's all part of the magic.) Numbered to 299 on the back, plus it promotes education, so that's cool too. I was able to dig up a Todd Helton parallel hiflew needed in return. 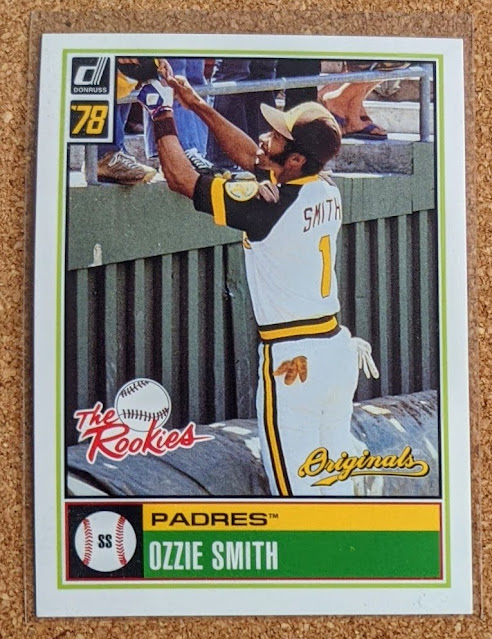 A few posts ago I talked about how I really dig the 2002 Donruss Originals "What If?" cards but lamented they were a little too scarce for me to commit to going after the full run of them. But then even before that draft was published, I had started searching online card stores for them, and it's pretty much been my main collecting focus since. It'll still take me a while to hunt down all 75, but I'm working my way there. Love the fan-friendly photo on this Ozzie card that pretends Donruss was putting out a set of The Rookies in late 1978. 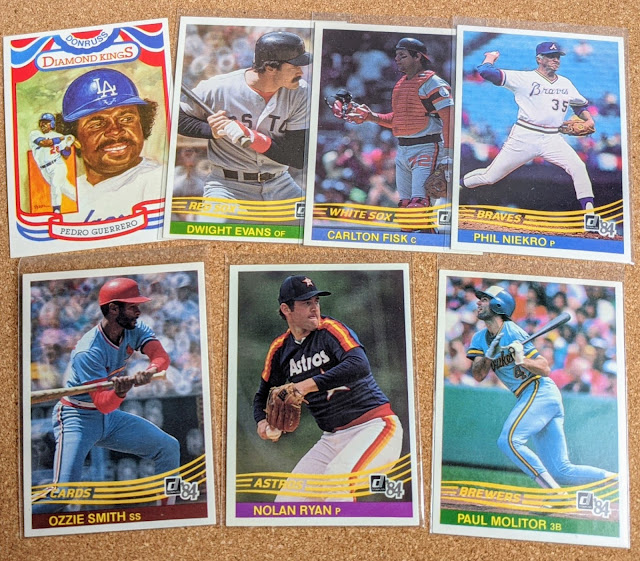 As far as cards that Donruss really did put out back in the day, I've also been trying to finally grab the last few cards missing from my '84 Donruss setbuild. Had to pony up a few bucks on Sportlots for some big names here, with Nolan Ryan being the most of the lot. Down to just a pair of Rated Rookies (Greg Gagne & Sid Fernandez) and Ripken left. 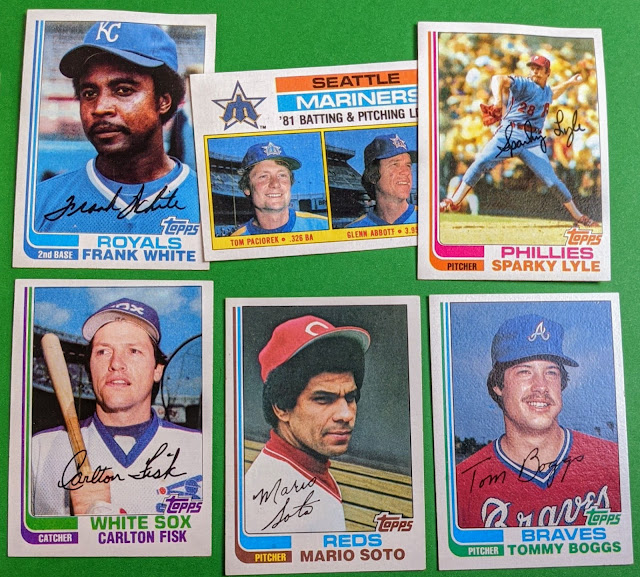 Next is a friendly mailing of cards from Fuji. These are some upgrades to my 1982 Topps set that I had accidentally damaged. In sad irony, three of these (top) ended up bent in transit or perhaps I just wasn't carefully enough opening up the envelope. Ha, I might just be cursed when it comes to '82 Topps! At least the headliner here, Fisk, made it safely.

(Dumb gif I made years ago.) 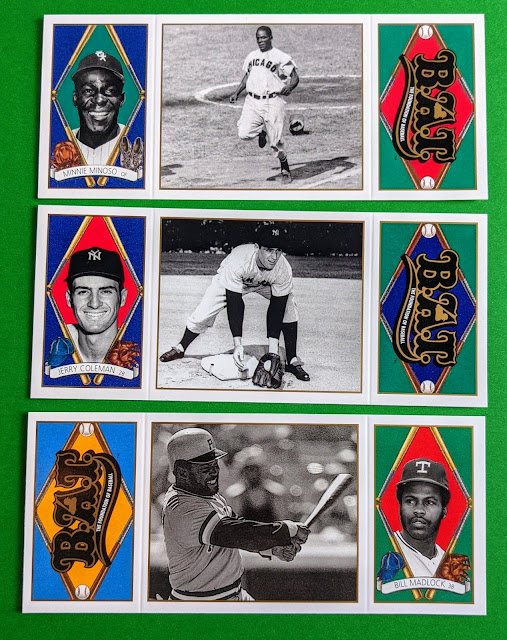 Cool to see these foldies in the envelope from Fuji too. The Madlock is a card I recently bought on COMC but they damaged it in shipping. Nice to have a mint one now. Actually, more irony, the day after getting this envelope, I decided to sort through my oversized cards and was surprised to see I already owned it. For pete's sake! So now I have 3 of them. Darned oversized cards being too big to store with the rest of the PC. But the Minnie Minoso and Jerry Coleman were new to me and very appreciated.
Thanks, Fuji! I'll hope to return the favor before long. 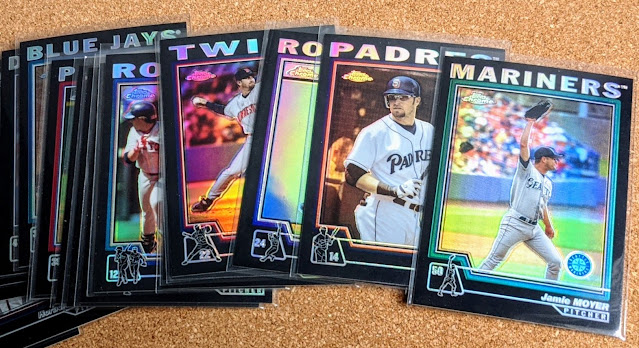 I also hit Sportlots for some help on my 2004 Chrome black refractor setbuild. The biggest name I bought during this spree was Mike Mussina, but it's been a few weeks and it hasn't shown up yet. Crap, is Sportlots good about refunds for missing cards? I hate to make a stink about it, and I don't doubt it was lost in the mail rather than the seller trying to rip me off, but it was a few bucks I'd prefer not be wasted. 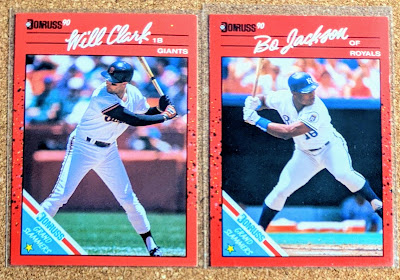 I also stuck a fork in 1990 Donruss with the final two cards I needed for the Grand Slammers inserts. Think I'm calling it good now with the base set, the MVP inserts, and these. I guess I'd still like to complement the set with that year's Baseball's Best and The Rookies sets someday, but that's not a priority. 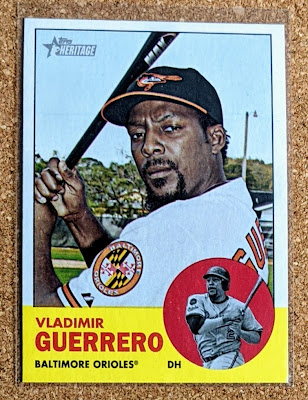 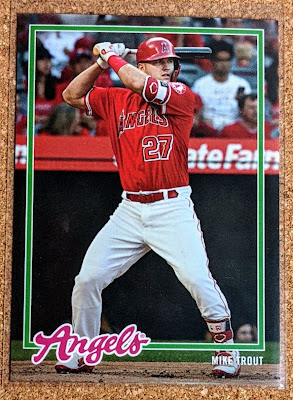 Here's another "1978" card, this time with Topps playing make believe instead of Donruss. I'd like to think they got the idea for these from the "if they were full-bleed" posts I sometimes do. But probably just a coincidence. But yeah, cool looking Trout card I got for a few bucks on eBay. 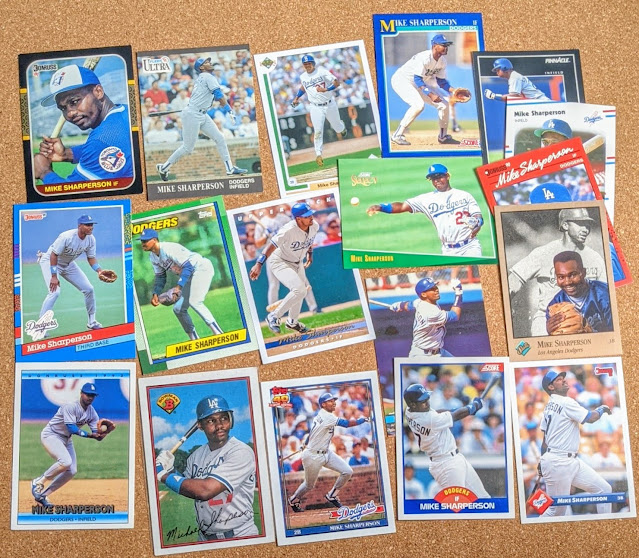 Last for today is a trade with Bo, who kindly went through his available cards to get my Mike Sharperson collection into respectable shape. 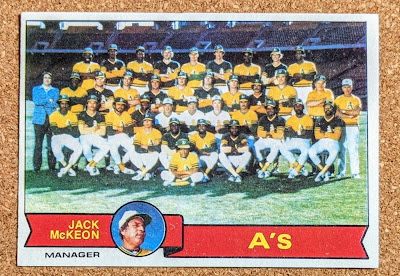 Also the 1 card from 1979 Topps that I really, really needed upgraded. It looks like some kid practiced drumming on it, so this nice, minty one is very appreciated to help feel like my complete set is a decent one.

Have a great weekend, everybody.