Here's another recent TTM success (I'm 2 for 2 on TTM attempts so far in 2020!) Most of this post was drafted a week or so ago, but I delayed publishing it so as to not spoil the surprise for a fellow blogger. And it's good I've got this post ready, because the new puppy has been exhausting! Oh man.. baseball card stuff will be on the backburner for a while thanks to this tiny hellbeast who needs A LOT of attention and training. Ugh, I'm gettin' too old for this shit.

I first started printing my own custom cards back in 2015, and the first TTM return I ever got on a card I made myself was on January 16, 2016 when Pat Neshek returned a request from me with his gloriously nutty signature gracing my printouts.

Four and a half years later I went back to that well for another round. I was really excited about this new custom template and figured I'd christen it with the living patron saint of through-the-mail autograph requests, St. Patrick Neshek. 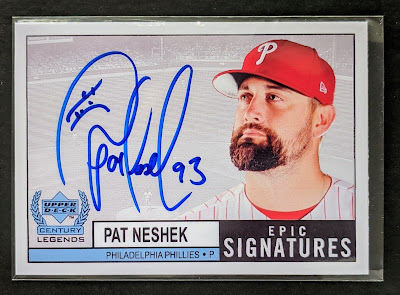 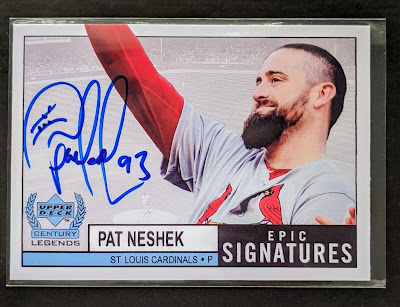 And this one! Love the photo from his All-Star Game introduction in 2014, even if his arm does get in the way of the autograph area a bit. Worth it. 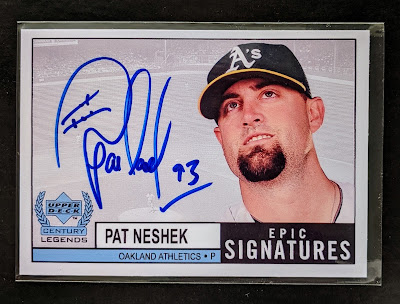 This one has already been forwarded onto Fuji. I know he loves those 1999 UD Century Legends Epic Signatures autographs, plus his favorite team is the Oakland A's, so I thought he'd get a kick out of this. I think Fuji was my inspiration to make this custom template, so it's only fitting. If you're familiar with this design, you might've noticed that I gave it my own personal touch by adding the blue.

I sent Pat 4 customs.. one A's, one Phillies, and two Cardinals. He kept one of the Cardinals cards for himself, which was an honor for me. Though I was going to give that Cardinals dupe to Kerry.. so Kerry, Pat Neshek has your card. I'll leave it to you to retrieve it from him, lol, because I don't think I can give up the one I got.

Big thanks to Mr. Neshek for signing my customs!
Posted by defgav at 4:14 PM