I foresee 2016 being The Year of TTM Customs here at Baseball Card Breakdown. Getting through-the-mail autographs is already a lot of fun, and combine that with cards I've created myself, and it's not hard to tell why I love it so much. I think I've sent out 5 different request so far this young year. I gotta say, these are some of my best work, and I'm excited to get them back and show them off to you guys as soon as they come in.

And here's the first one! 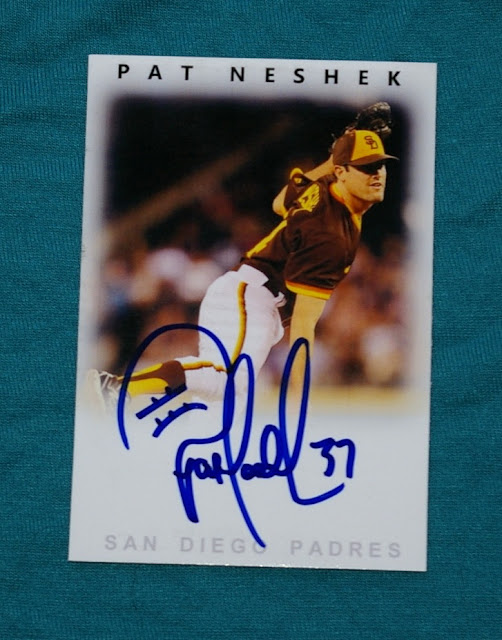 Pat Neshek signed and returned this (and a few more like it) for me in under 2 weeks from his PO Box across the country in Florida. A card/autograph collector himself, Neshek is known as being one of the coolest fan-friendly guys in the history of the game. So it was "low hanging fruit" for me to go after him for an autograph, though I'm no less stoked on the successful return. Plus he's a "Once a Padre.." guy thanks to a stint with San Diego in 2011, so I got to go ahead and use photos from my hometown team. I really love the the throwback shot.. I've stated before that Padres uniform of the early 80s is probably my all-time favorite.

The design inspiration is 1996 Leaf Signature Series.. a classic that has become my go-to for TTM customs. With luck, you'll be seeing several more returns in this style soon enough. They're quick and easy to make (all you really need to do is find a cool, square photo of the person), there's plenty of white space to sign, and they look pretty sharp. (I obviously don't mess with the foil oval in the center that the original cards had.)

The back is fine too: 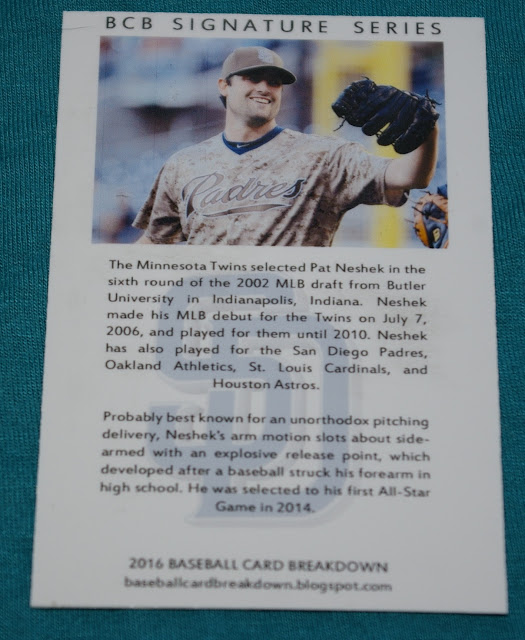 Some of the Neshek cards turned out less than perfect-- my fault. It might sound funny, but I've really improved my card-making process over the past couple weeks. I've been unemployed since New Year's and so I've had a lot of time to spend on this stuff. Some of my "rejected" signed dupes will likely eventually find their way into trade packages of trader buddies who appreciate Neshek/Padres/throwbacks (so like Nick, maybe JediJeff.. anybody else?) For the record, in my letter, I suggested he keep the extras as my gift to him, but the generous guy he is, he signed and returned them all (Maybe he kept one or two?.. I don't remember exactly how many I sent.)

I also made a Neshek mini for him to sign. 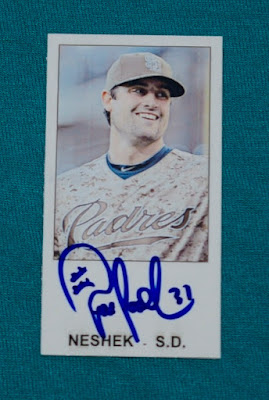 Cute little card! (I have a few signed extras of this one too that are available for trade. Just let me know if you want one.)

Huge thanks to Pat Neshek for taking the time to sign for me. Best of with your career, Mr. Neshek!
Posted by defgav at 3:49 PM