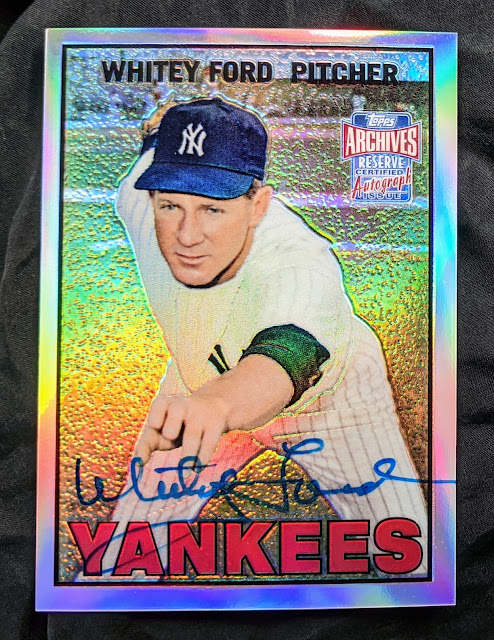 I haven't gone to the gym since covid struck back in March, but I'm still working on my ARMS. That's my Archives Reserve Master Set. Trying to acquire every card from the Topps Archives Reserve line. The fact that no parallels or printing plates were included makes it a somewhat realistic goal. I've just got a lot of pesky autos and relics left to chase down. But I love all-time great players, and I love shiny refractors and pack-certified autographs.. so Archives Reserve is right up my alley. I'd count this as a "lifelong collecting project" as it's something that'll likely take up the rest of my viable years to complete, if I ever do. Which is fine. That's a hobby for ya. It'd be sad if I ever got to an "I'm all done" point. But with my ever-expanding wantlist, I'll never get there. Worst case scenario, I kick the bucket working on '52 Topps or something ridiculous like that. lol

But back to this card, Whitey Ford is a big name. "The Greatest Living Yankee" since Yogi passed, some say. More World Series victories (10) than any other pitcher. And a really funny cameo during the golden age of The Simpsons! 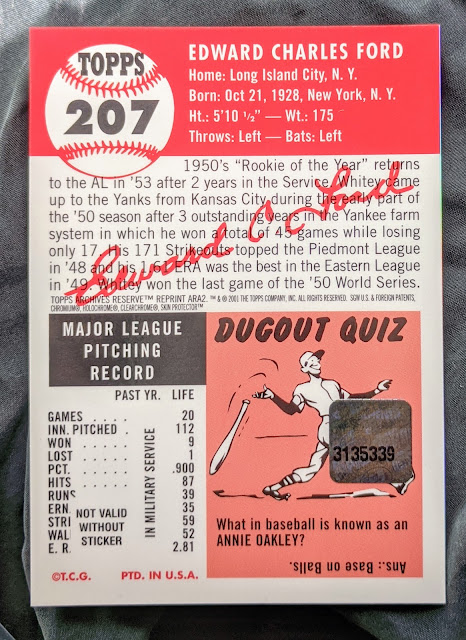 The back... brings up some problems with the card. These 2001 Archives Reserve autos are supposed to be Rookie Reprints. But wait a minute, the front is a 1967 Topps reprint. That was his last Topps card. The back here correctly replicates his first Topps card (1953; though his true rookie was in '51 Bowman). As far as I can tell, the other autos in the 2001 set are all reprints of the player's first Topps card, so I'm left to believe this was a mixup by Topps. There does not appear to be a corrected version out there. In regular Topps Archives that year (not Reserve), there was a Whitey Ford autograph on a 1953 reprint.

And his base card in 2001 Archives Reserve is correctly his 1953 card. (That year, Archives included reprints of both the selected player's first Topps card and last Topps card, while Archives Reserve had a smaller base set and only included the first Topps card. Update: Jeremy pointed out in the comments that they also screwed up the Maz card.) So yeah, probably just a dumb mistake by Topps using the wrong card front for the Archives Reserve autograph. (Honestly, I think his '53 Topps is kinda creepy-looking [the eyes... or lack thereof], so I'm not complaining and I like his '67 better.) For another "whoopsie", look at the stats area and notice the "Not Valid Without Sticker" warning. But instead of where it was supposed to go, there's the hologram sticker over on the right instead. LOL #ThanksTopps

But poor quality control and all, I'm still very happy to add this card to my collection and check another big name off my ARMS wantlist. And a solid deal, costing less than half of what that above Archives auto is asking. Just 139 hits left to go.
Posted by defgav at 3:07 PM