We all know the sportscard market has gone nuts over the past year. A lot of old-school collectors are feeling squeezed out as demand and prices creep up on trading cards across the board.

But luckily for me, I appear to still be the only person on the entire planet who collects glow-in-the-dark cards, so at least that area of my collection has been flourishing just fine throughout everything. In fact, I've recently completed a couple of rare glowing sets that I considered white whales ("glowing whales"?) of mine for the past few years. And I was the lone bidder on both auctions! Hey, fine with me! I wouldn't be at all surprised if glow-in-the-dark cards skyrocket in popularity soon as the masses realize how frickin' amazing they are. But for now, I'll continue quietly working on my g.i.t.d. collection in the shadows. 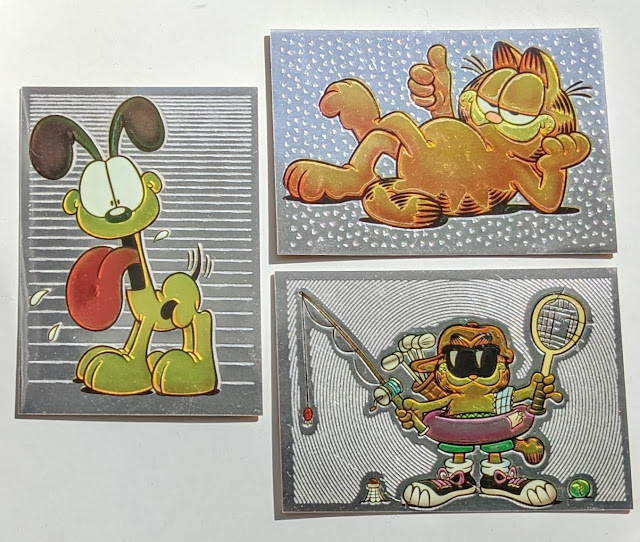 I had a search saved for these glowing Garfield cards-- a 3-card insert set-- for a couple years. I earlier picked up one off eBay and one off COMC (still waiting on my shipment with an estimated ship date of a month and a half ago), with just the "Sporting Garfield" card vexing me with the only copy I could find for sale being overpriced on COMC. But then an eBay seller listed an auction for 2 full sets (6 cards total) at a reasonable starting bid (less than the one card I needed on COMC), and like I said, I ended up being the lone bidder. Now I've got them all, multiple times. I basically collect "Tim Wallach style" when it comes to glow in the dark cards, so dupes are keepers too (--at least unless a compelling reason to trade them comes along-- You know, assuming Earth ever welcomes a second collector of glowing cards). 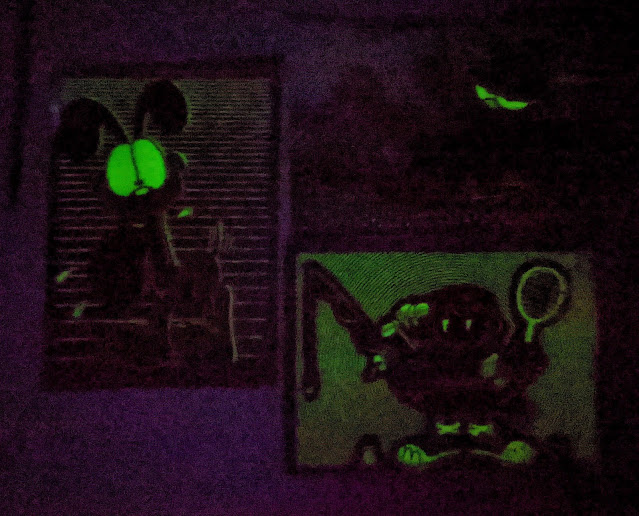 Lounging Garfield (upper right) was the first one I got, and was disappointed by the underwhelming glow performance-- I think the background dots are supposed to glow, but they are too small to really have a visual effect in the dark. So I didn't have high hopes for the other 2 cards, but I'm pleasantly surprised that they look a lot better, with help from backgrounds that glow a bit. 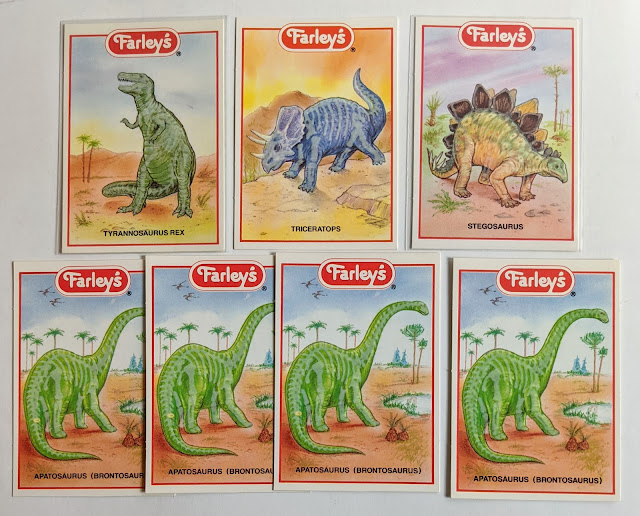 Boom! To glow-in-the-dark supercollectors like myself, these dinosaur cards from Farley's fruit snacks are the Cadillac of glowing cards (well, they are a bit longer than a standard card). These are the '52 Topps high numbers of the glowing card world, or maybe 2011 Update Mike Trout would be more apt, lol. I previously had 3 of the 4 cards in the set, only missing the Brontosaurus. Then a listing for the above lot popped up on eBay. Not only did I complete my set, but also got a second complete set, plus a couple extra Brontosauruses! And thanks to this lot, I discovered a variation with the Brontosaurus cards: 3 of the 4 here feature a yellow mark on tail (and a tiny cloud under the "y's" of the logo), yet the one on the right does not. Sure, just a printing flaw, but obviously not a random one-shot deal since I've got 3 of them. Kinda cool. 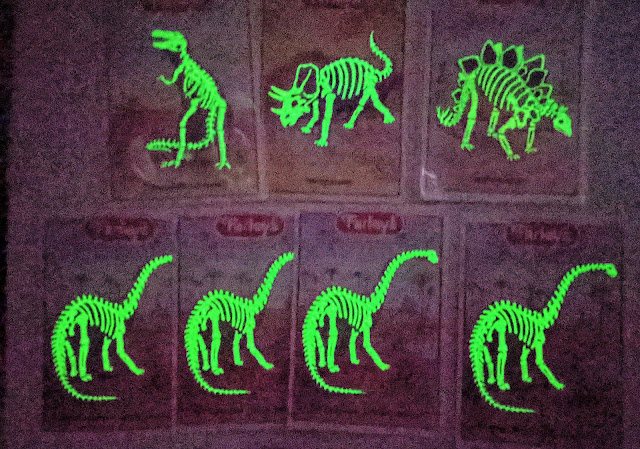 Love the skeletal glowing on these!

After landing this trio in separate wins, I officially deleted my saved search for 2018 Ginter glowing mini parallels. I want to like the things, but they don't glow very well and they're typically expensive (seeded just one per case). This Puig might end up being the final nail in my PC of his. He was fun for a while, but in recent years, well... still hasn't latched on with a team (since 2019), plus after some new "me too" allegations against him, and he's found himself off my wantlist. Adrian Beltre is still untouchable, though.. happy with that pickup. His former teammate Nomar Mazara is a semi-PC guy of mine-- setting his cards aside for the past few years-- but I think I'm cutting bait with him, as he just hasn't put it together to become more than a replacement-level player, and I'm not really attached enough to keep on collecting him. But this glowing mini is a keeper, of course. 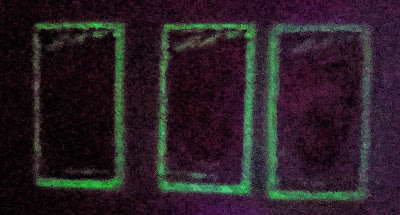 The glowing looks something like this. Yawn. (oh wait, this photo is upside-down, but you get the idea.)

I mean, I'll still happily take them in trade, but I think I'm done buying these things. 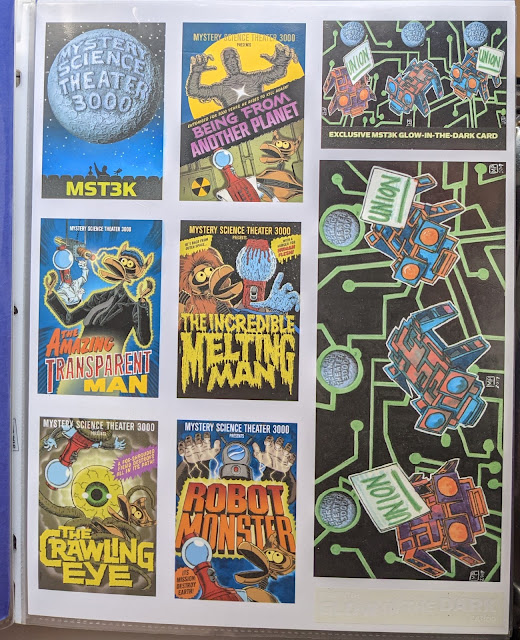 Ok, this is now perhaps the top piece in my entire glow-in-the-dark card collection! Indie card guru RRParks will be mentioned a lot in upcoming posts. (One of his recent sets included a "fan subset" and I got my own card in it! Really should post about that one of these days.) Anyway, Richard Parks was doing a clear-out sale type of thing and I scored a complete set of the glow-in-the-dark cards from MST3K Series 2, plus an uncut sheet of them (above), and also a proof set of them without the glowing stuff on the cards. Super cool convergence of two of my favorite things: Mystery Science Theater 3000 and glow-in-the-dark cards. 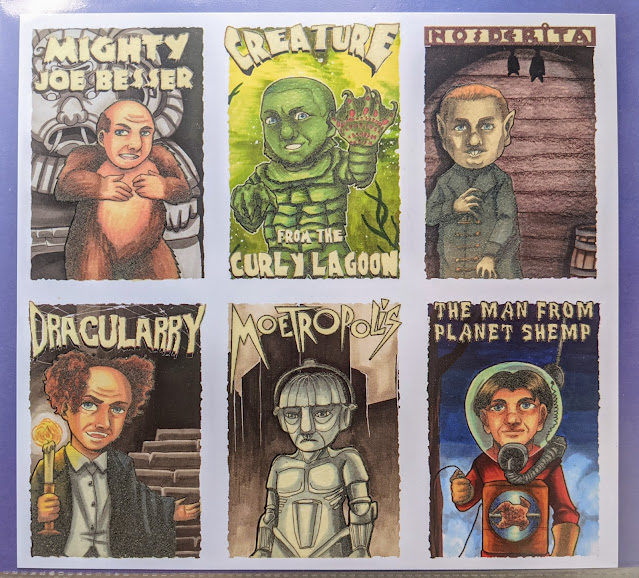 I also got both a regular (cut) set and an uncut sheet of the glow-in-the-dark Three Stooges cards from a few years back. I had previously only been able to track down one of them. My favorite of these is Moetropolis.. (I'm fascinated by the old Metropolis silent film.)

I wasn't even previously aware of these other RRParks glow-in-the-dark cards that Richard was kind enough to dig up from his archives for my order.

And I also got these 3 as an uncut panel, too. I'm not really familiar with the subjects, but nonetheless thrilled to add more glow-in-the-dark cards to my collection. 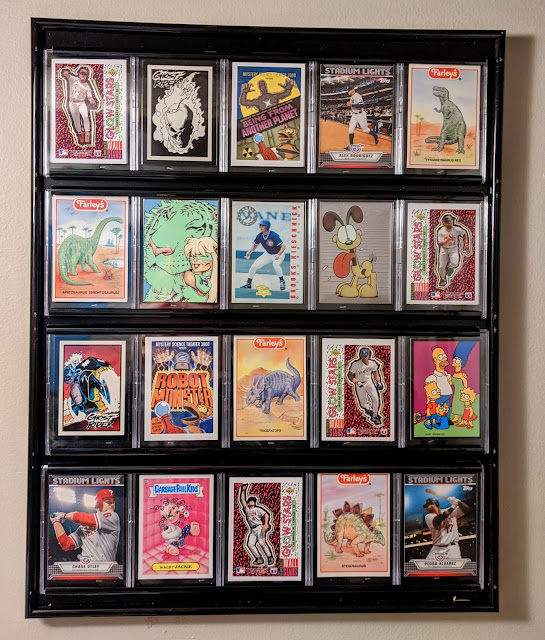 I got a couple 20-card frames like this from my wife back at Christmas '19 and if you've been wondering what I was ultimately going to do with them, well one of them has been used for my MST3K autos and the other one for a glow-in-the-dark card display. I think I've got a nice variety here. 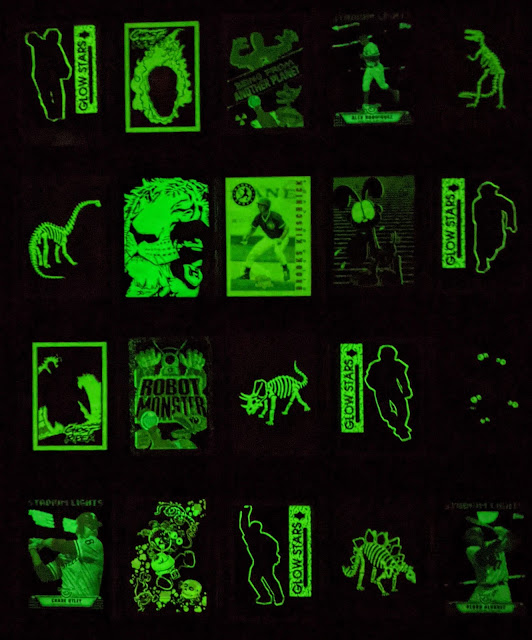 Looks good in the dark, right?! These aren't set in stone-- heck, I swapped one out right before taking the photo-- but I'm liking this group. The frame is hanging on the wall in my glow-in-the-dark museum (a.k.a. basement bathroom).

For more of this kind of stuff, check out the main Glow-In-The-Dark Cards page, which I try to keep reasonably updated though I still need to add the new things from this post.

Thanks for reading and keep on glowin'!