In these days of being extra careful not to catch a nasty disease, Howard Hughes' later antics of "meticulous hand-washing" and "social distancing" aren't looking quite so crazy in hindsight. LOL. He wouldn't have missed a beat here in 2020!

Howard Hughes is an interest of mine thanks to being a link to connect with my late grandfather, who-- as a young amateur pilot himself decades ago-- admired Hughes' aviation feats and innovation. Before succumbing to mental issues, Hughes was one of the most famous, rich people in the world, known for his fast planes and titillating films.

My grampa was born on this day 105 years ago, so I planned this post as a little birthday celebration of showing off my Howard Hughes PC.

Let's kick off with a fresh-off-the-presses custom nine-card set I just put together. 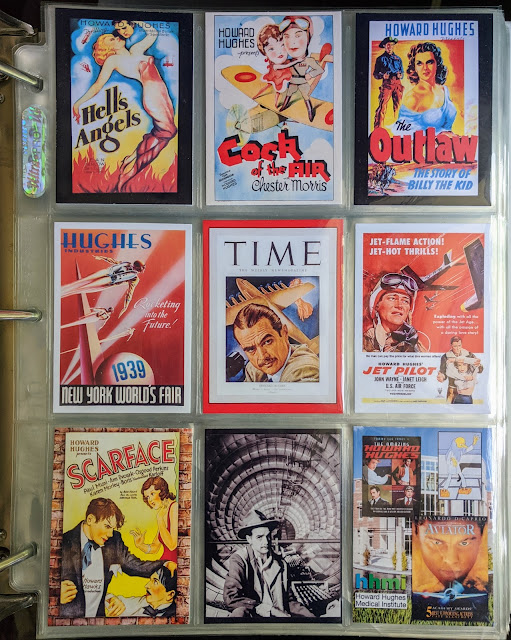 We'll take a closer look at each card in a second, but here's how the set presents in a page. I like it! As you can see, I mostly wanted an excuse to make cards out of neat old movie posters that caught my eye. 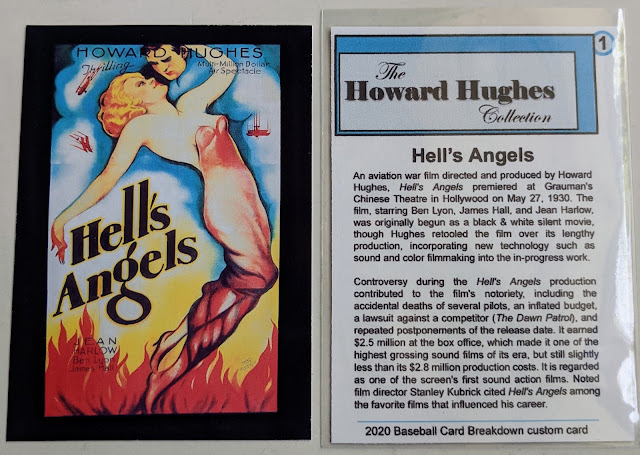 Hell's Angels was probably his biggest hit film. I haven't seen it. Actually, don't think I've seen any of the movies Howard put out.. but I'll look to rectify that soon. Regardless, pretty cool looking artwork. 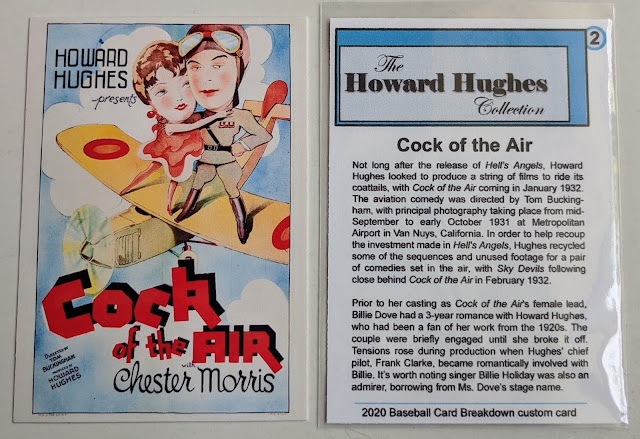 Another fun, if somewhat naughty one. 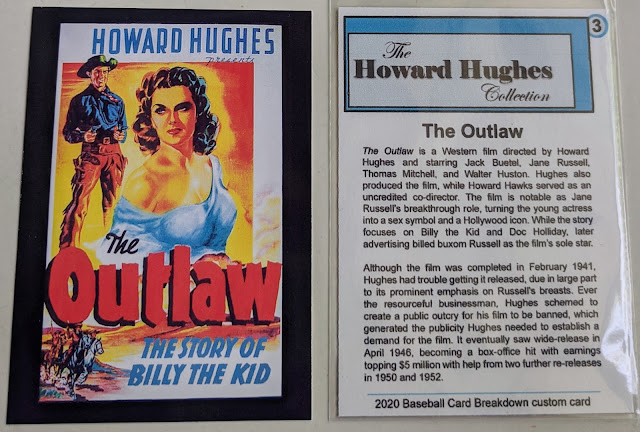 I wrote the backs, mostly paraphrasing/plagiarizing Wikipedia (Man, I wish Wikipedia was a thing back when I was in school! Writing reports would have been so much easier!). If you spot any typos, please keep them to yourself because I don't want to have to re-print anything. lol 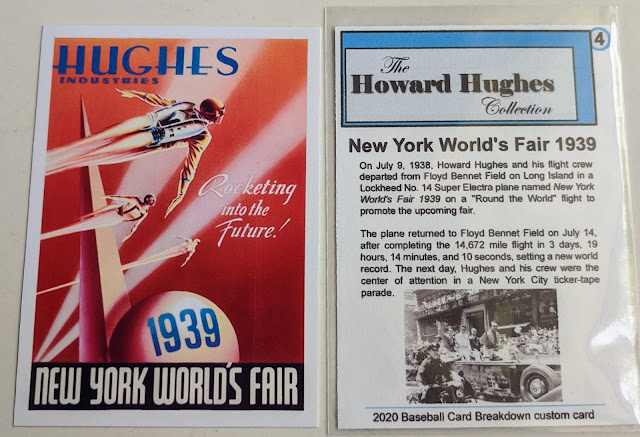 This one might be my favorite! Love that image of rocketeers shooting over the Statue of Liberty or whatever. Looks really neat. 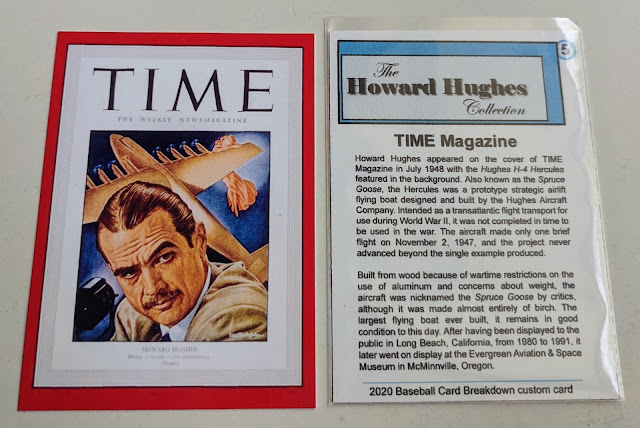 TIME Magazine cover deserved a card. I printed 2 copies of the set, by the way, with one currently paged and the other sleeved. 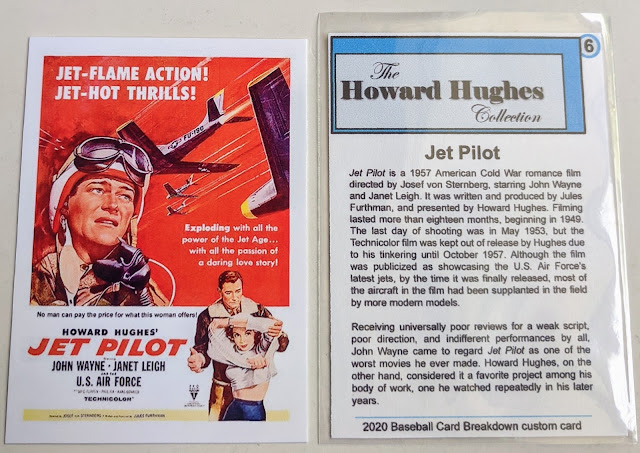 Jet Pilot was a flop of a film, but I liked the John Wayne poster. 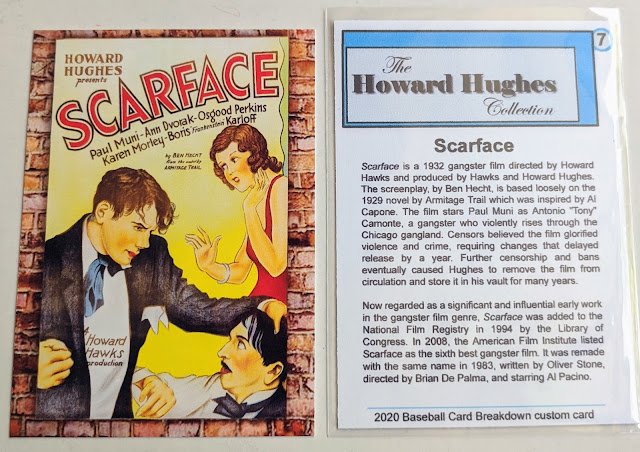 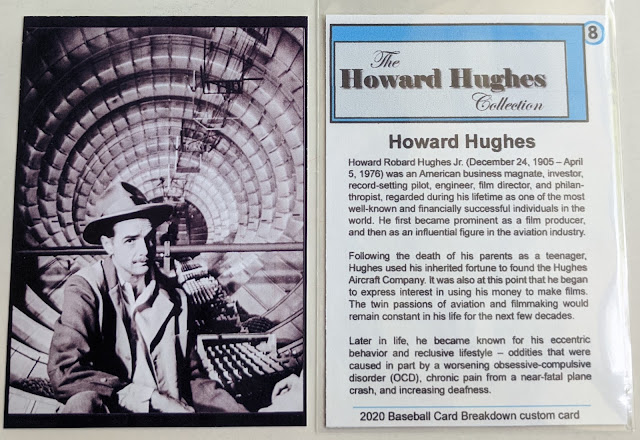 A nice photo of the man inside the Spruce Goose and a quick bio on the back. I often forget he and I share a birthday.. another decent excuse to collect his cards. 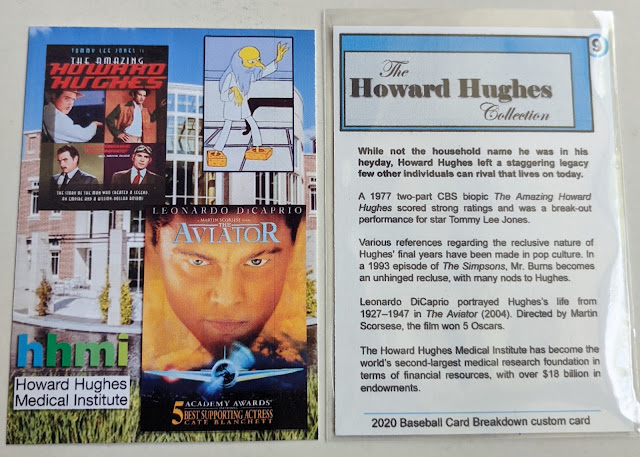 Then the 9th card wraps up his enduring legacy.

And so there's that! For the record, my grandfather was a devout Catholic and hopelessly devoted to my grandmother all his life, in contrast to Howard Hughes who was known as a womanizer and wasn't afraid to bend the rules to get what he wanted. Not sure if Grampa was a fan of Howard's films, but he was probably really just interested in the aviation scenes, if so. I never had the chance to talk to him about Hughes, as far as I remember, but what spurred on this "player collection" of mine is when we found this among his possessions after he'd passed... 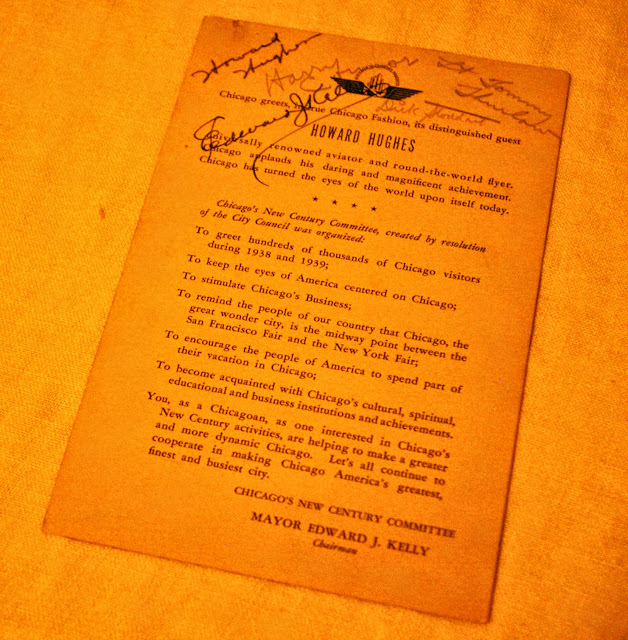 My grandfather would have been about 23 years old when he got this program signed at a Chicago appearance by Hughes and his flight crew circa 1938. Probably the crown jewel of all my collectibles, especially given the personal connection.. but even if not, a Howard Hughes autograph that's confidently legit is something special.

I talked about this item more back in a 2015 post, so I won't rehash it too much now.

I've already got an idea for a "Series 2" of my Howard Hughes Collection custom set (a second page, that is), which I envision will include a card-sized reprint of this autographed program, plus individual cards for each person who signed it. (And I guess I'll fill up the rest of the 9 slots with more movie poster art or whatever grabs me.) But that's a project for another day.

Now onto some other stuff. 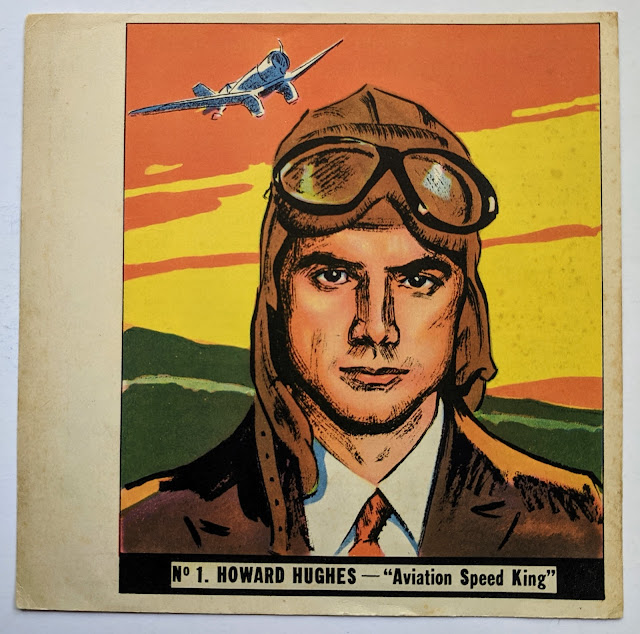 Rookie card! 1936 Goudey History of Aviation (R65) #1 Howard Hughes. Might be a stretch calling this a "card" as it's bigger than a CD cover and about as thick as a magazine page. But still very cool. 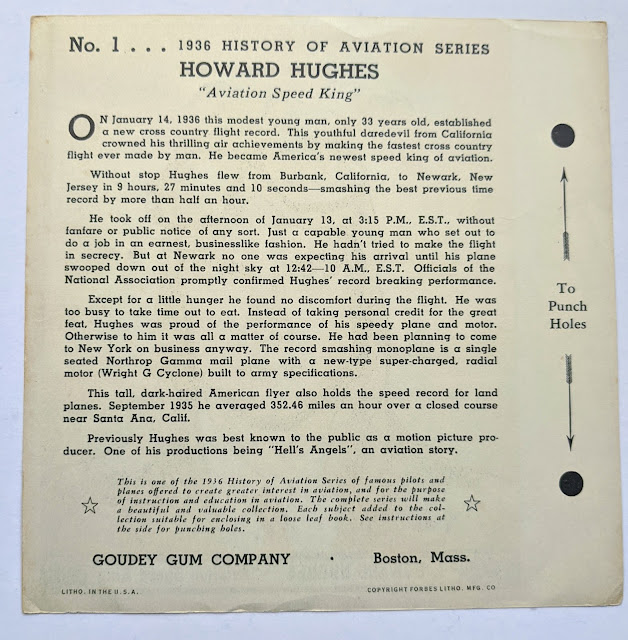 He's got another card in this same set, which I also picked up not too long after the other one.. 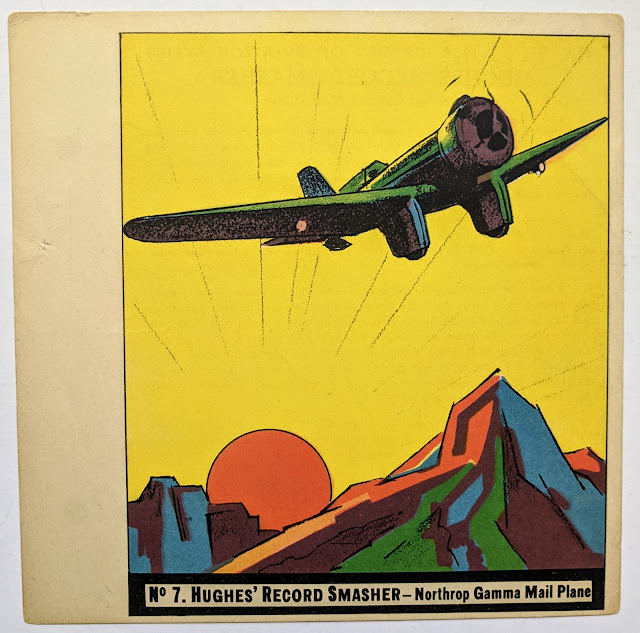 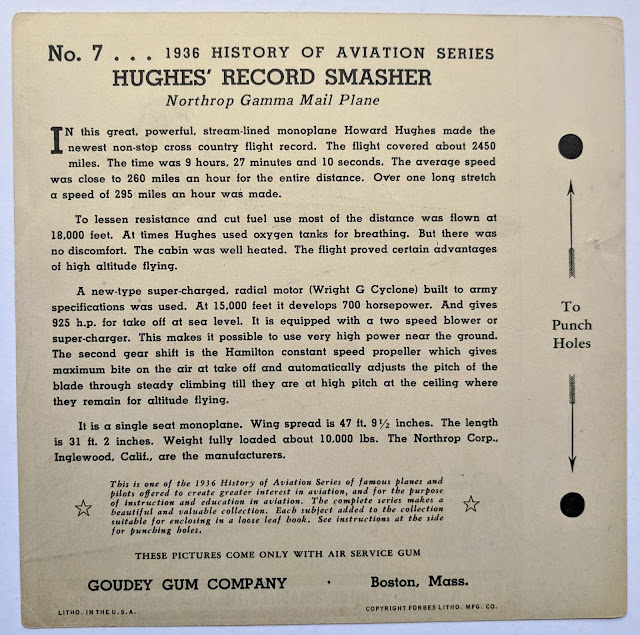 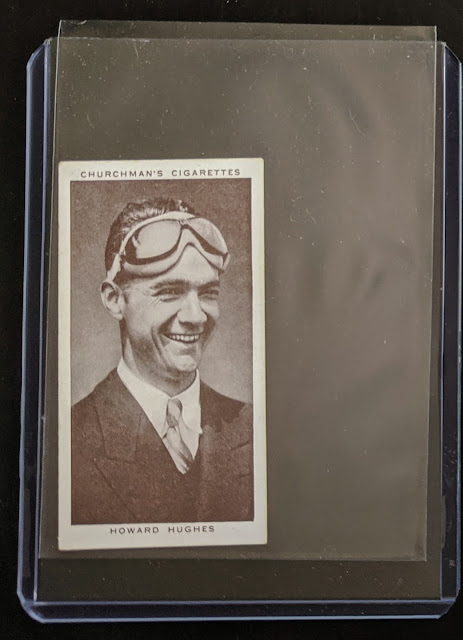 Unlike his other "playing days" cards, this 1939 Churchman's Kings of Speed tobacco card is quite affordable. Ran me just $5.46 delivered in a PWE. 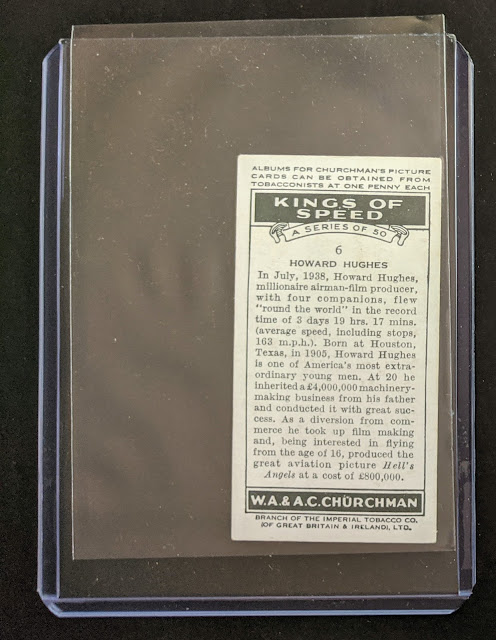 According to the TCDB, I'm left with just one vintage whale to track down to complete my career-era Howard Hughes card collection...

Really nice looking old card. I hope to track one down someday. Other highlights from this set include Charles Lindbergh and Amelia Earhart. These 3 big names can get a bit pricey, but looks like the less familiar names in the 25-card set are readily available on eBay, so that's a good sign. I'll just have to have some patience. 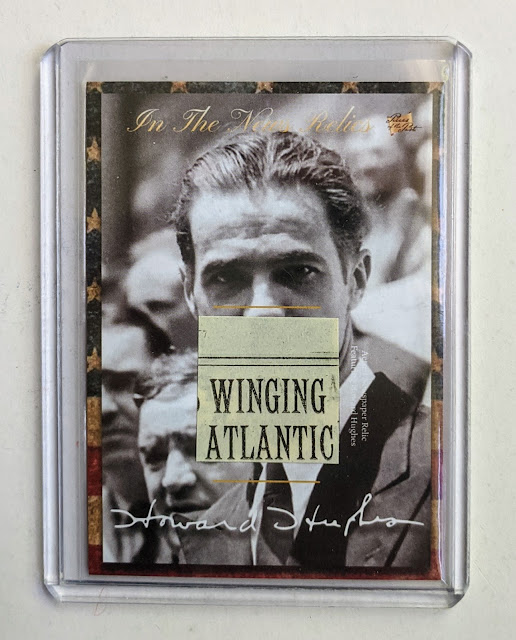 The last card I've got to show off today is an ugly mother. It's a "relic" card featuring a clipping from a vintage newspaper article about Hughes. Really a poorly designed card covering up much of his face, but whatever.. wasn't too expensive. It allows me to be able to say I've got a Howard Hughes trifecta (using a loose definition).. owning his rookie card, an autograph, and a relic card. Winging Atlantic, alright. 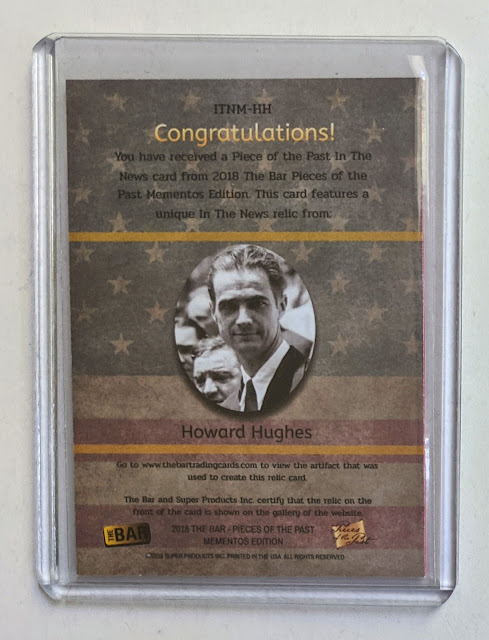 I also have a few cards in my COMC inventory that I'll be requesting shipment on one of these days once COMC starts having more staff in the office and gets orders shipped out without the huge delays they're working with currently.

So eventually I'll have to do a follow-up post to this one with those cards plus the "series 2" custom set once I make that. Not sure if that'll be a year from today or sooner.. but someday!

I've also got his card in the 2002 Topps American Pie set, #106, but other than these, I'd be interested in any Howard Hughes cards/memorabilia I don't have.

Thanks for reading! Happy Birthday to my grampa up in heaven, and happy wedding anniversary to my wife and I. Six years today.. not too shabby.
See you next time.
Posted by defgav at 4:58 PM