The best autograph in my collection 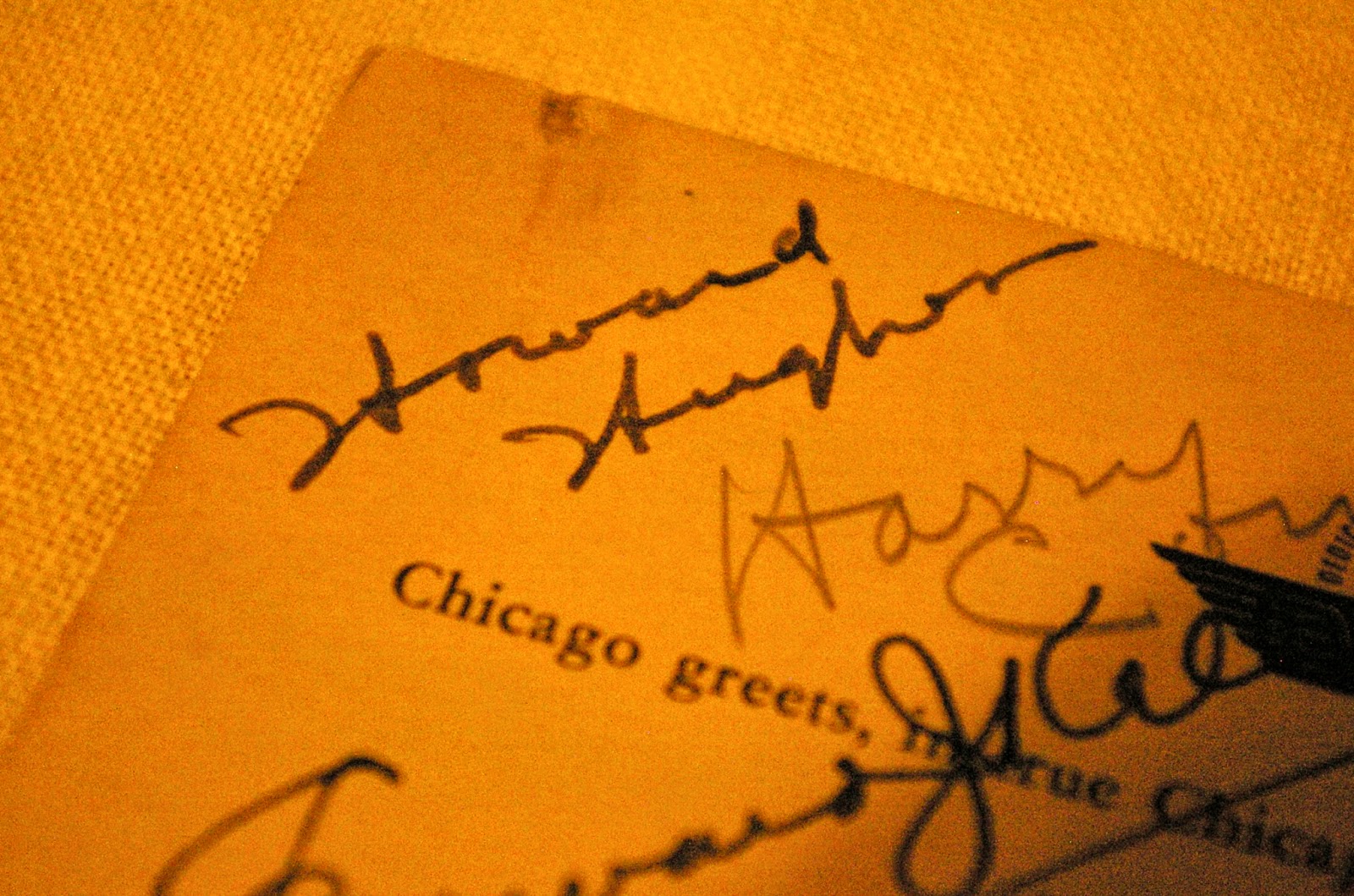 Howard Hughes was a larger-than-life figure. I shouldn't even try summing up his fascinating tale, but I'd point you to his Wikipedia entry. Here's the introduction:

Howard Robard Hughes, Jr. (December 24, 1905 – April 5, 1976) was an American business tycoon, investor,aviator, aerospace engineer, inventor, filmmaker and philanthropist. During his lifetime, he was one of the wealthiest people in the world. As a maverick film tycoon, Hughes gained prominence in Hollywood from the late 1920s, making big-budget and often controversial films like The Racket (1928), Hell's Angels (1930), Scarface (1932), and The Outlaw(1943).

Subsequently, he formed the Hughes Aircraft Company and hired numerous engineers and designers. He spent the rest of the 1930s setting multiple world air speed records, built the Hughes H-1 Racer and H-4 "Hercules" (better known to history as the "Spruce Goose" aircraft), and acquired and expanded Trans World Airlines, which later merged with American Airlines.[4] 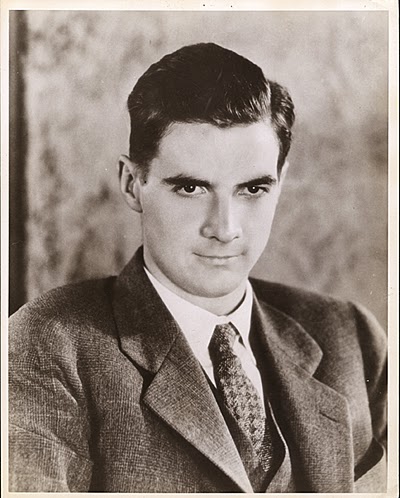 The younger generation would probably best know him thanks to the 2004 biopic The Aviator starring Leonardo DiCaprio, directed by Martin Scorsese. 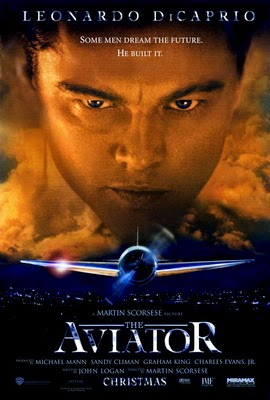 Stan Lee has also sited Hughes' persona as the basis for Tony Stark, the character behind the Iron Man comic book super hero.

And people of my generation may know him best for parodies of his crazy, reclusive later years, such as on The Simpsons. 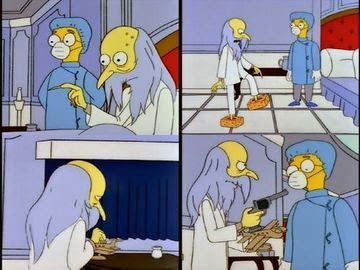 But from the late 1920s through the early 1970s, he was one of the most recognizable names in the world, right up there with presidents and the top hollywood stars of the day.

My grandfather was a hard-working devout Catholic from Chicago. He followed in his father's footsteps as pioneers in the plastics industry, creating everything from plastic dishware sold in department stores, to light-weight equipment pieces used by the US military. His enthusiasm for technological innovation was known to me later in his life by his love of ham radio and the dawning of home computers. Before my time, he was an aviation buff and even owned and flew his own small plane. I think it was a little Piper Cub two-seater. Back in the day, he'd take it out for a joyride most weekends, until heart issues later in life made him decide it wouldn't be safe for him to continue flying-- his greatest fear was that he'd have a heart attack in the air, dooming any passenger and potentially people on the ground. 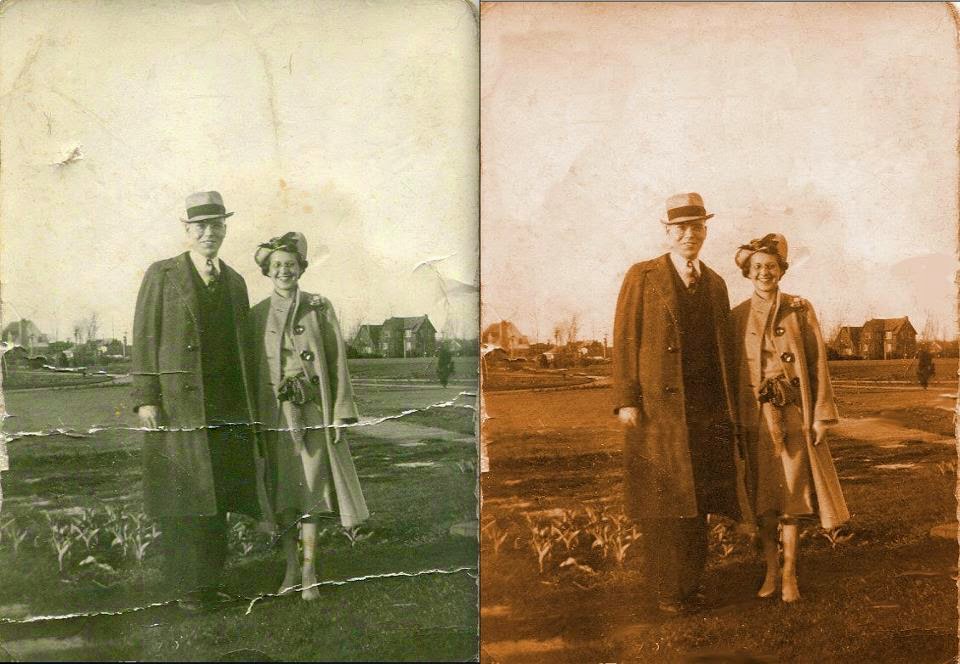 After spending much of retirement in Florida, he and my grandmother moved to my hometown of the San Diego area for their twilight years. I was grateful for the opportunity to spend more time with them, though as a teenager, I probably didn't appreciate it enough. After my grandmother passed in '94, especially, I put in a lot of quality time with my grandfather, probably spending more one-on-one time with him than anyone else in the family during his final few years. He was a great guy. He passed away in 2002 at age 87.

While he wasn't much for collectables (sadly no baseball card collection to be passed down to me), he was a bit of a packrat, often hanging onto random little items that might come in handy someday. That's definitely a trait I've inherited, much to my wife's chagrin.. though, no, neither of us were quite in "hoarder" territory. I still own and wear some pieces of clothing my grandfather passed down to me, strange as that may sound. I had a comfy pair of kick-around-the-house shoes that were his that I just finally had to toss last week, as they were falling apart. As far as other notable nicknacks, I've got a cargo net from his plane, perhaps the only remnant of it left.

Sorry for the tangent on my grampa, but all this background info is to show how a guy who wasn't big on celebrities or autographs would come to admire and hang onto a signed program from a Howard Hughes appearance in Chicago circa 1938. 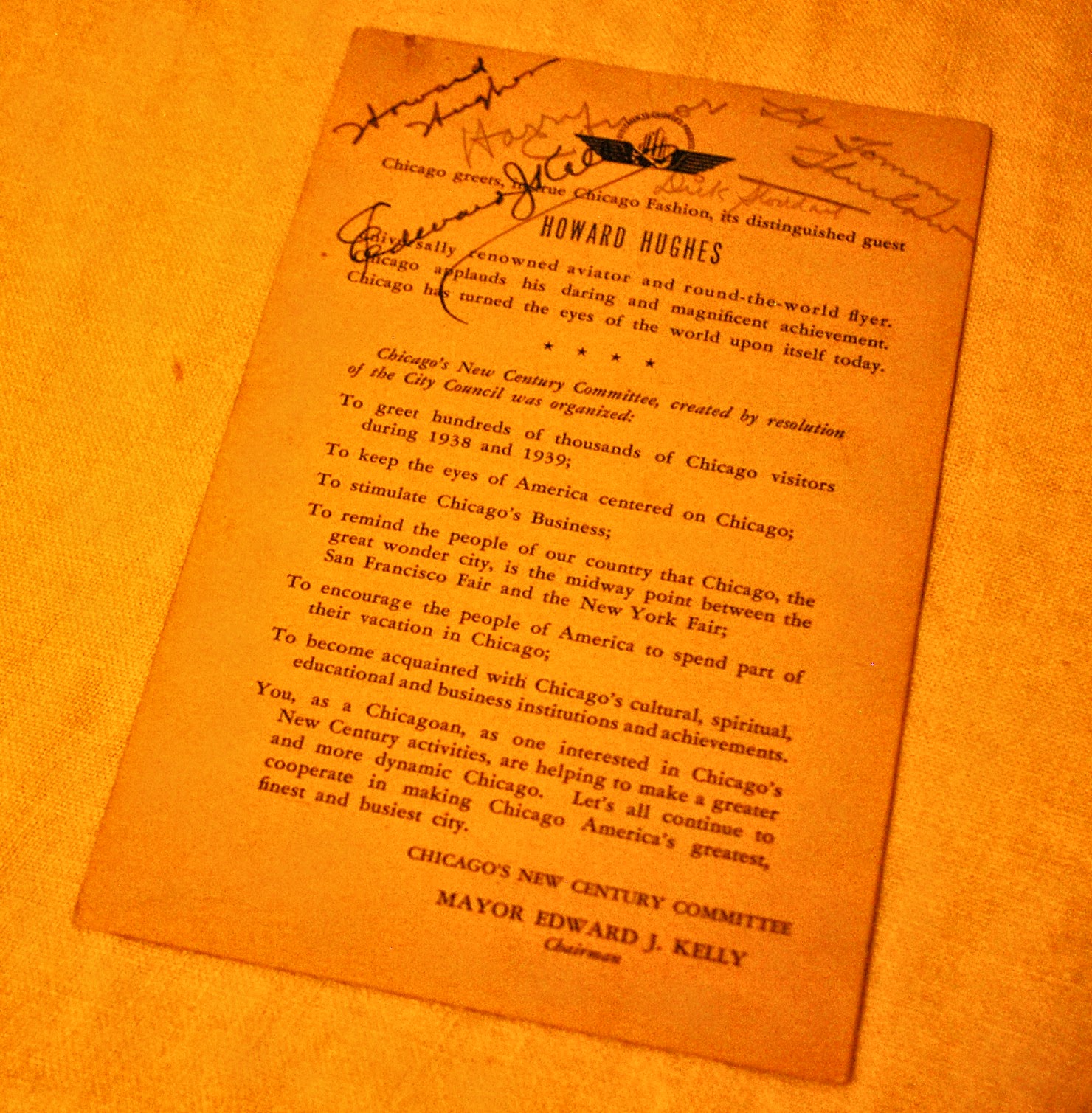 In addition to Howard Hughes, the program is also signed by then-Mayor of Chicago Edward J. Kelly and members of Hughes' record-breaking flight crew, including navigators Harry Connor and Lt. Tommy Thurlow, as well as radio engineer Dick Stoddard.

As an aviation buff in Chicago at the time, this appearance was right up my grandfather's alley, and I can see how he would be caught up in the excitement enough to jump at the chance to meet and get autographs of these men though it was not something he would typically do.

In addition to this signed program (I'm calling it a "program" though I'm not sure that's the correct word for it; it's about half the size of a standard piece of paper, blank on the back, and about as thick as a baseball card), there is also an unsigned copy of the same program. It appears the main reason my grandfather hung onto this throughout the years is because the two programs were protecting an old family photo between them! Unfortunately this find was only discovered after his passing, so we couldn't ask him more about its origin.

I'm no appraiser, but I believe this piece could sell for 4-figures without too much trouble. If I bothered to get it professionally authenticated and/or matted in a nice display frame, 5-figures might even be a realistic possibility, though that might be overly optimistic. (Hey, some sellers on eBay are shooting high for what I consider less-desirable Hughes autographs.) But as you've most likely gathered from this post, this is a cherished memento of my grandfather's life, specifically his passion for flying and innovation, and so I have no plans to sell it. (That said, if any Howard Hughes supercollectors come across this post and want to make me a ridiculous offer for it, well, I'd listen. While I love it, it'd be tempting to turn it into a '52 Topps Mantle, Clemente RC, vintage Ted Williams and/or other "unattainable" cards along those lines. Or hell, what I should do is sell it and invest the money in a retirement fund. But where's the fun in that?)

Had I bought this somewhere from a dealer or something, it wouldn't be nearly as cool to me, plus then I'd likely have lingering questions about it's authenticity, as you pretty much always have somewhere in the back of your mind unless you actually witnessed the signing yourself. But since I've got no doubt it's for real, that gives it a nice boost in my eyes.

I've currently got it safely stored away at my dad's house, though one of these days I would love to get it nicely framed and displayed.

In anticipation of this post, I also went ahead and tied it in to card collecting by picking up one of the very few 2½" by 3½" issues featuring Howard Hughes out there. 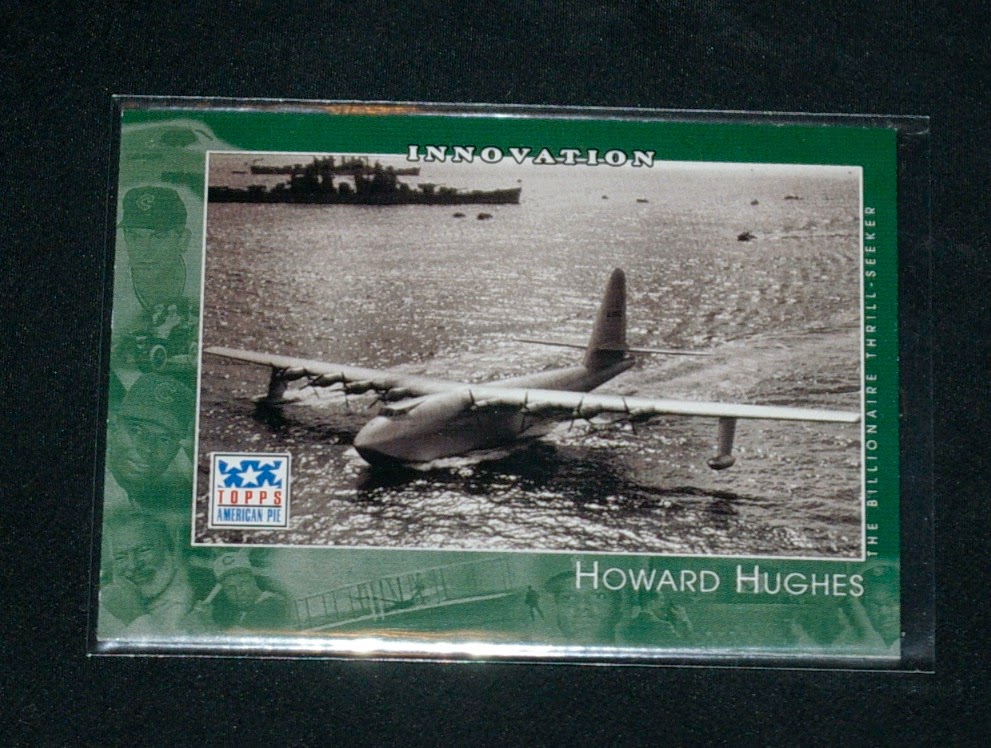 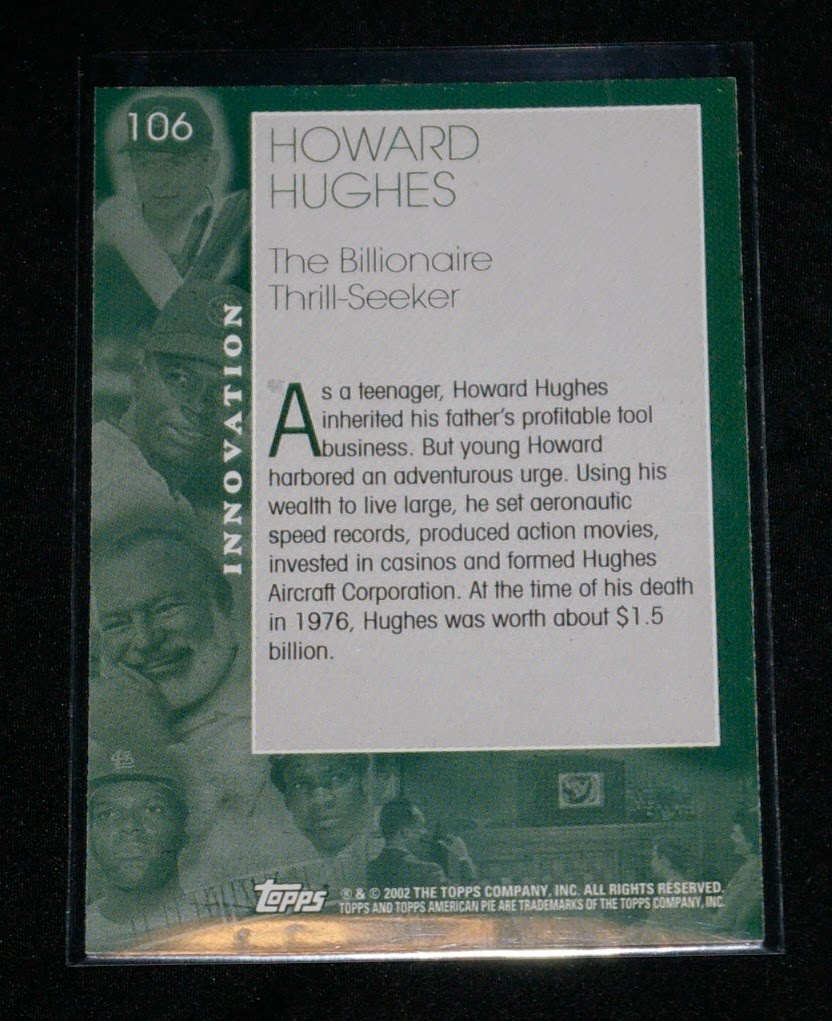 This is from Topps' 2002 American Pie set. Pretty cool. If/when I frame the autograph, perhaps I'll include the card in the presentation. I should get a double so that I can display the back with it as well. Throw in a cool photo of the guy, and you'd have a neat display piece.

I don't think I'll become a full-fledged Howard Hughes collector at this point, though I definitely wouldn't rule out adding to my collection here and there. Also, if I ever decide to concentrate on a "birthday" minicollection, Howard would fit into that as a fellow Christmas Eve baby.

So there's the post about my best autograph.
Thanks for reading!
Posted by defgav at 3:30 PM