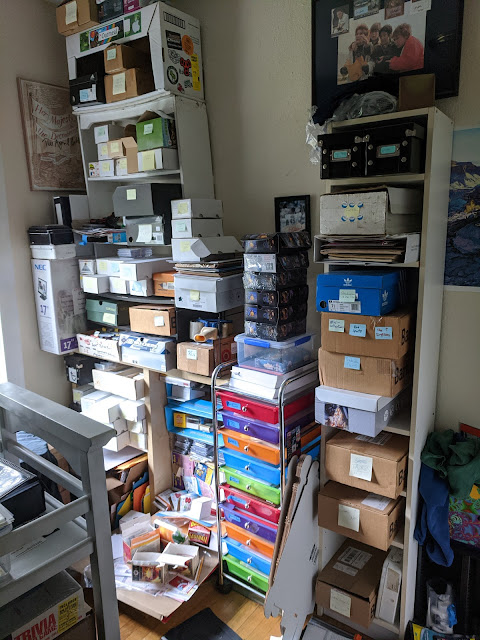 Here's a peek at my card room today. I'm not proud of this cluster-kerfuffle. And the other walls in the room aren't really any better.

I'm moving in a few days.

Oh man, it's gonna sucks transporting all this stuff. At least the new place is less than 5 minutes away. I'll just take a lot of trips, I guess.

I was thinking my new card room was gonna be a little smaller, though my wife said she thinks the new one is bigger. I don't remember it much. I've only been inside the new house once so far, over a month ago back when we first looked at it. The market is so competitive here right now that you can't pussyfoot around if you want to buy a house. Excited to get the keys soon and finally start moving in.

Anyways, I hope the new room won't get so messy. When we first moved into this current house, I hadn't quite gone so hard back into card collecting yet. There was the thought when we moved in that the room would be like my "music room" where I'd get Fiberoctopus going again and work on some tunes. But I just found myself turning to cards in my spare time, not picking up my instruments. But yeah, that room has really gotten away from me with all the cards n' crap over the past 7 years. A semi-fresh start should be good. 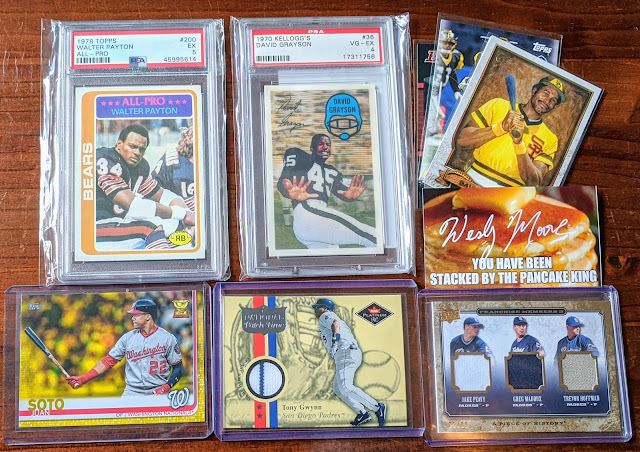 Tradeathon cards from Wes! I'm not a big football collector, but I've got some favorites like Walter Payton, so I pounced when Wes offered that PSA'd '78. I don't really know of the player David Grayson, but jumped at that one because of my recent infatuation with old Kellogg's cards. I've got a bunch of Kellogg's baseball cards, but this is my first football one, not to mention my first graded Kellogg's card. Pretty neat. Also called dibs on the yellow Soto rookie cup, Gwynn pinstripe, and Padres triple relic with a trio of past Padres pitching greats (wish we could have had some guys like that in 2020 on the mound against the Dodgers in that last series. Oh well, waitin' till next year. Go Braves.) Great package all around thanks to the Pancake King.
Big thanks, Wes! I hope I don't make you wait too long for the return your way. 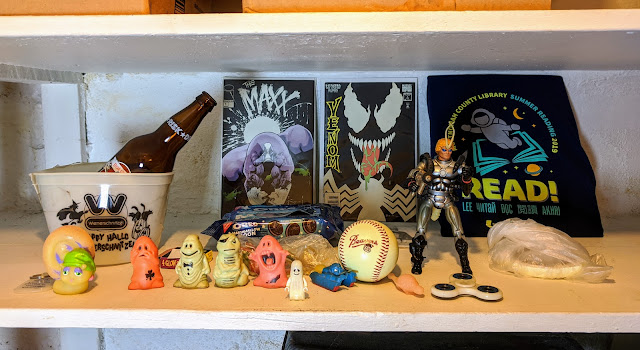 Back to old house stuff, here's my glow-in-the-dark shelf as it stands before the inevitable clear-out. Everything here glows in the dark at least in part. I hope I find a good shelf to fill up with glowing stuff somewhere in the new house to keep that project alive and growing.

Happy Halloween-time.
Speaking of different glowing colors, check out this new card I got recently..... 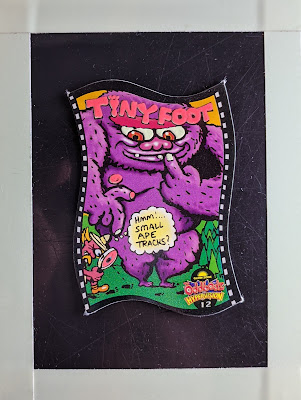 This is an 1997 Oddbodz from Australia.. it's actually a "Combo Glo" parallel that includes two glowing colors. 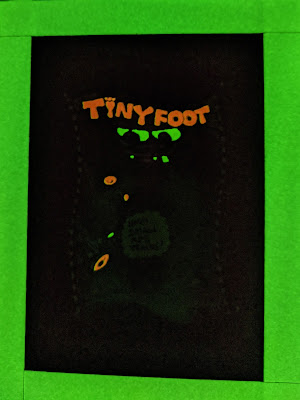 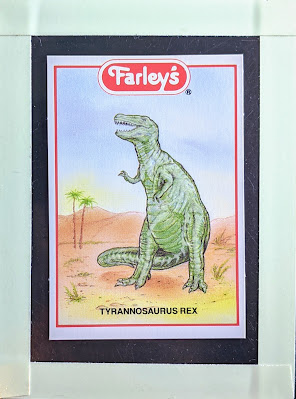 In my previous post I mentioned I loved cards with "hidden" glowing parts, and the cards that Farley's distributed with their pouches of Dinosaurs fruit snacks in 1993 are an excellent example of that. 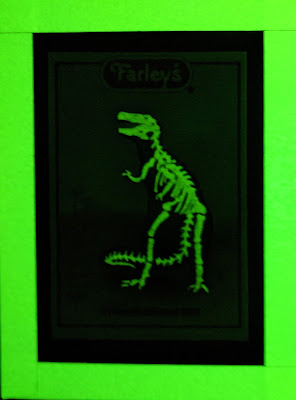 Skeleton!
I recently tracked down 3 of the 4 cards. Just need the Brontosaurus.
Today my dog Ruby turned the big "Five Mo.".. 5 months old, that is. Here's a video of her getting a bellyrub out in the backyard the other day. There wasn't any sound because my phone's broken, so I put a short song over it that I made back in 2007 that happened to be about the same length. (I ran that "big five mo" joke by my wife and she said it wasn't as funny as I thought it was, but I'm using it anyways, lol)
Posted by defgav at 9:38 PM