I've made it the first couple months of the year without buying any retail. I'm trying to cut down on buying packs of modern cards this year. I'm gonna try to stay away from it all besides probably some Archives, but we'll see how it shakes out. The thrill of a rip is fun, but a big part of why I buy packs is to get fresh trade bait, but I haven't been trading much in recent months. And when I do trade, I often have to rely on making customs for the other person since I don't have much else available they'd want. A few weeks ago, I heavily thinned out my unwanted "for trade" cards in a large flat-rate box to Billy Kingsley for him to deal with and add some names to his big list of people he has a card of. I thought getting active on TCDB would spark some trading action, but it hasn't (though a lot of that is my fault because I never really added that many cards into my account). Add into that ever-rising postage rates, and like a lot of other collectors, I've been cooling it on trading lately.

But I've got this box of 220 (pronounced "2nd to none") a.k.a. Bryce Harper's online exclusive Topps set from 2018 that I threw in with my Black Friday shopping. I had been waiting for a good time to bust it open, and then figured I'd wait till Harper signed. And now that he's agreed to his big deal with the Phillies, I suppose I should open it now.

Ok, having just now opened the box, looks like it's one of those deals where you get a mini box with a "complete base set" (+ insert sets) and then a separate mini box that includes a hit and a parallel. 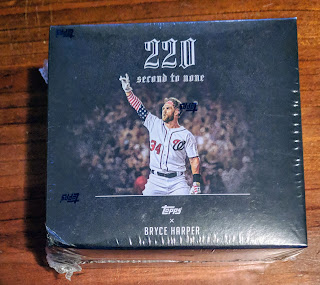 So not exactly a blaster, but close enough. (The title of this post is a failed attempt to be clever-- a play on words with Harper's Bazaar / Harper's blaster.) Actually, this was the price of 3 blasters. Probably not among my wisest purchases, but I was curious, plus it helped my order get over the threshold for free shipping. 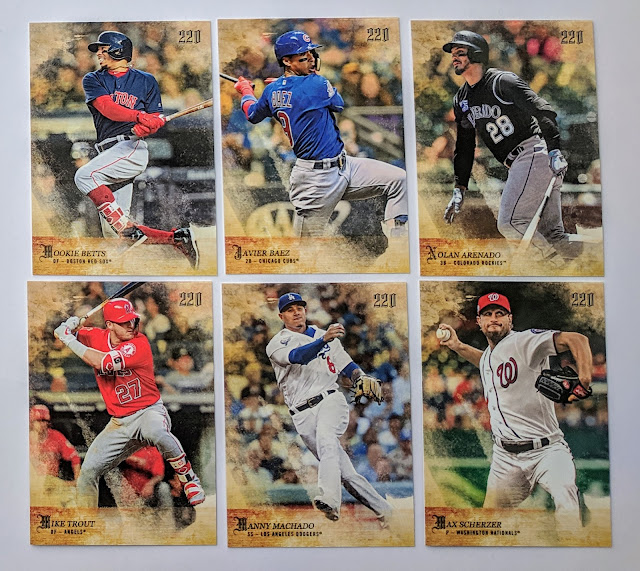 I guess this is the "base set" since there are the most of these cards (14). I don't hate it. Bryce was involved in the design, though I assume he probably just gave some broad suggestions and later signed off on the finished product. But it's a funny thought to picture Bryce in front of a computer tweaking fonts in Photoshop. 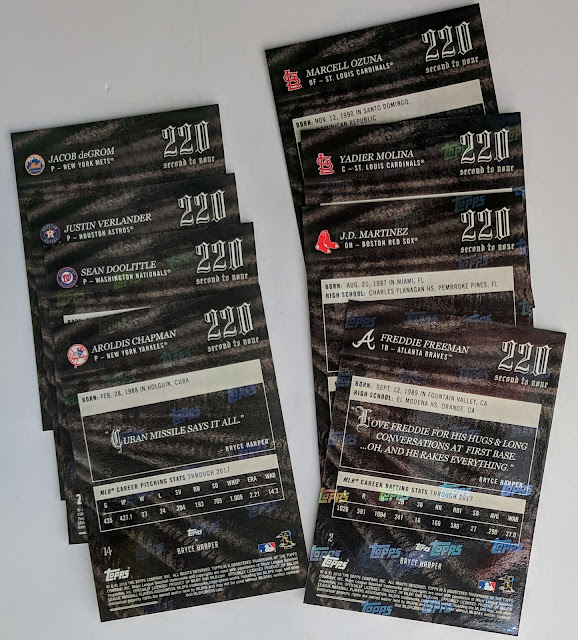 Similar to Topps Now cards with the glossy backs and Topps hologram sheen. 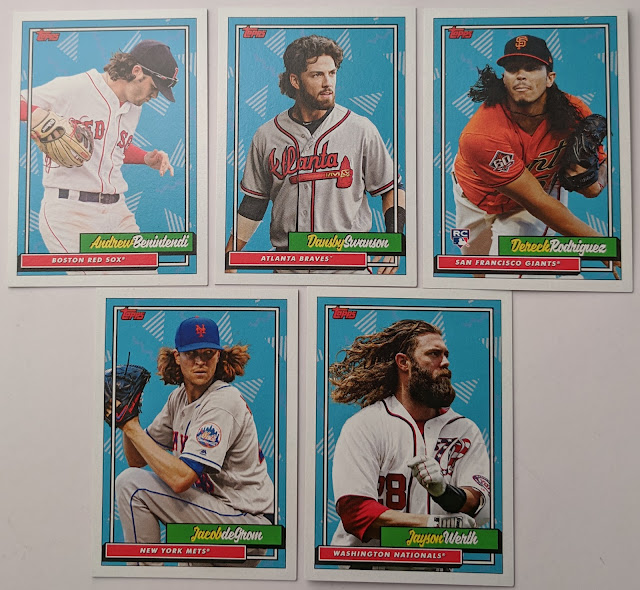 Here's a 5-card insert set featuring dudes who've each got a big, flowing mane of hair. I'm all for quirky card ideas, but I'm not sure about this one. lol. I've got a little Andrew Benintendi PC going, though, so I'll happily add a distinctive card to it. The design seems to be a takeoff on 1992 Topps but with the "totally radical 90s" vibe cranked up. These are on Heritage-style stock. 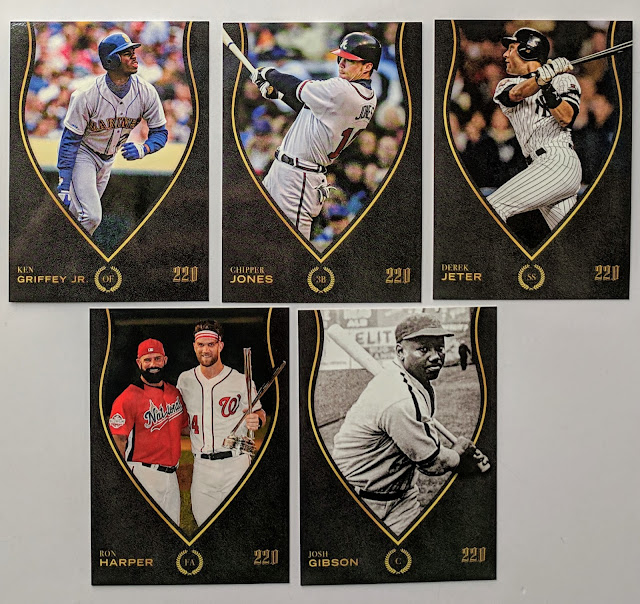 This is an insert set called Harper's Heroes. (What, no Jonathan Papelbon card? j/k.) These are kinda cool. Nice to see Josh Gibson getting some love. I wonder if Bryce's dad signs TTM. And does his position listed as "FA" mean he is a Free Agent? (lol, no, it's probably for Father).

I know Bryce was a big Mickey Mantle fan growing up. That must've been an awkward conversation when he was like, "The Mick definitely has to be there among my baseball heroes!" And the Topps people had to sheepishly lower their heads and whimper out that his likeness isn't under contract. 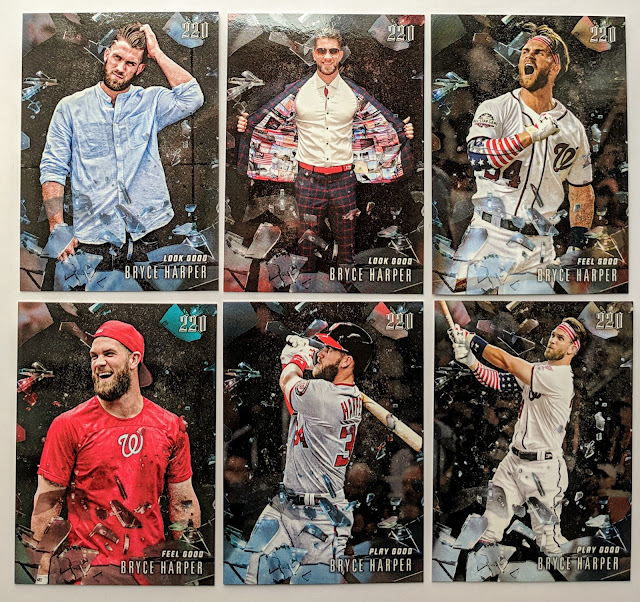 The last insert set is called Look Good, Feel Good, Play Good, focusing on the man of the hour. Best of luck to him in Philadelphia, though I think it was a dumb deal for both parties. I'm sure I've got well over 100 Bryce Harper cards at this point and I should probably retire the PC to the Hundred Card Club one of these days.

So those were the cards promised in each box. Now here are the two chase cards I got in there... 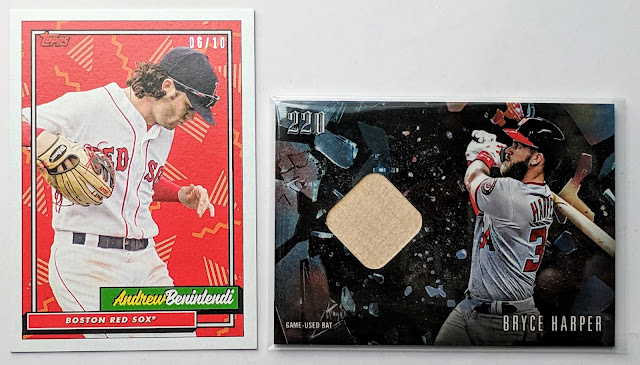 A Benintendi parallel #'d /10. Sweet! As I mentioned, I collect him, so I'm happy to add a low-numbered card of his to the PC.

I assume each box is guaranteed a hit, and I got an unnumbered Bryce bat relic. Looks like that's probably among the most common hits available to pull, but I'll take it. Better than a plain white or grey swatch, at least. And it looks like all the autos available in this product are stickergraphs, so they're not all that attractive to me anyway.

So anyways, there's that. Some decent cards for my collection here. Not sure exactly how involved Bryce was in designing these cards, but I'd say he did a fine job.

Thanks for reading and have a great weekend!
Posted by defgav at 4:23 PM