Big round up of incoming cards

Time to catch up with the non-purchased (and non-drafted) cards I've received over the past 3 weeks or so. It's a lot! 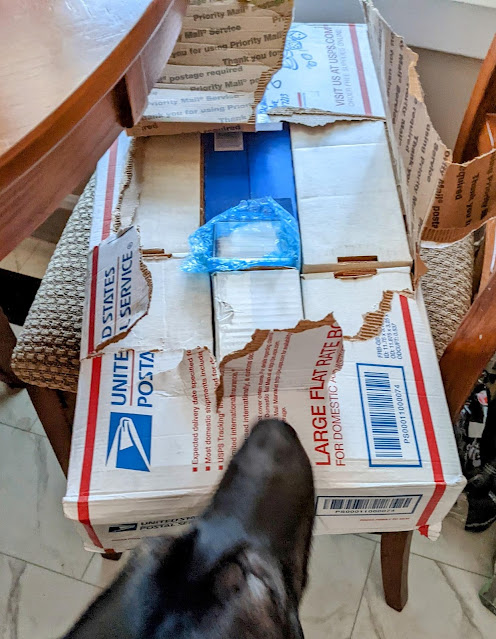 Don't worry, the box didn't arrive like this, but there was a minor hole smacked into it (no damage to contents) that I used to rip it open and snap this photo while Ruby checked it out. I think this might be the most cards I've ever received at once. Friend of the blog The Turrdog answered my call for complete sets from the overproduction era and hooked me up with 5 of them. 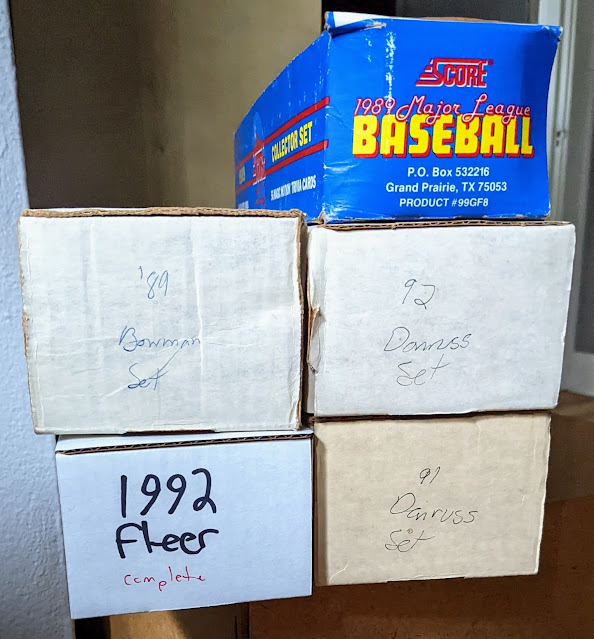 Nice. I was especially happy to see the pair of sets from '89. I've now completed Score baseball from '88 thru '91 (still wanting an extra '88 Score set.) The only set here I've really looked at so far is 1989 Bowman. The cards are much more palatable when you're just going through the set, as opposed to when these tall-ish boys are mixed in with standard dimension cardboard. Too many similar/boring photos, and backs that aren't worth your time to bother flipping around, but the set has its charm. I thumbed through the whole thing in a sitting or two and basically used it as a flashcard exercise testing my visual identification of the 40-man rosters of 1989. I'd say I probably got 1/3 of them just by the guy's appearance, another third I needed the facsimile autograph as a hint (varying degrees of helpfulness there), and the remaining third were guys I either wasn't really familiar with or had never heard of in my life, mostly prospects that didn't pan out.. the birth of modern Bowman as a perennial prospect-heavy product. 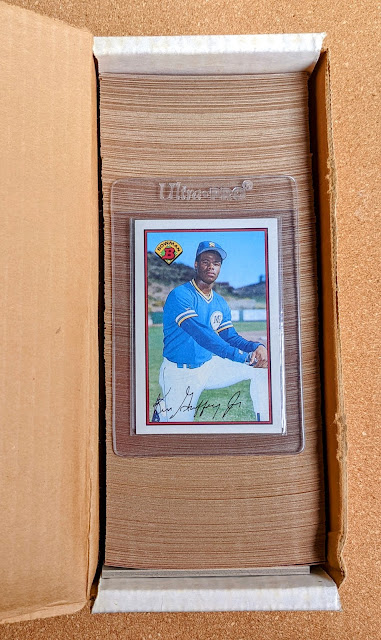 While not in factory set packaging, the cards are all pack-fresh-- which is a nice change of pace because usually whenever I come across '89 Bowman cards, the top corners.. well, you know: it's '89 Bowman! The Griffey rookie was so damn minty I was compelled to pluck it out and give it the "box-topper" treatment with some added protection.
This is just the base set. I wouldn't mind adding the retro/reprint inserts someday.
It wasn't only junk sets from Turrdog, though. Some very appreciated vintage setbuild help was also included in the flat-rate box... 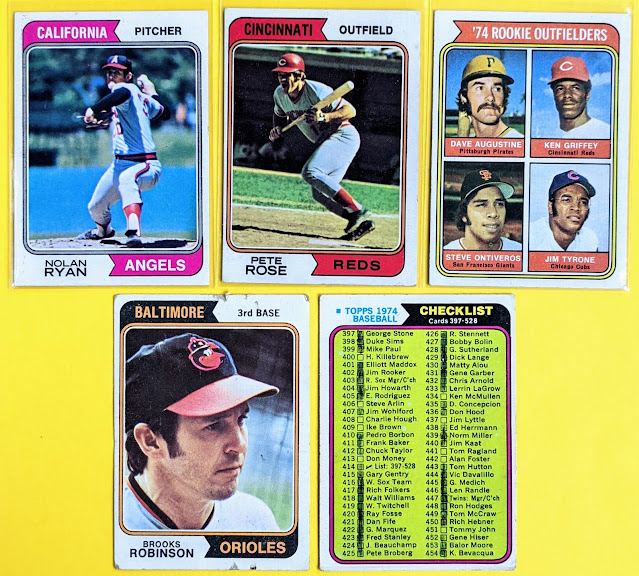 Great to check some big cards off my dwindling 1974 Topps needs, though Brooks and the checklist could use an upgrade someday. 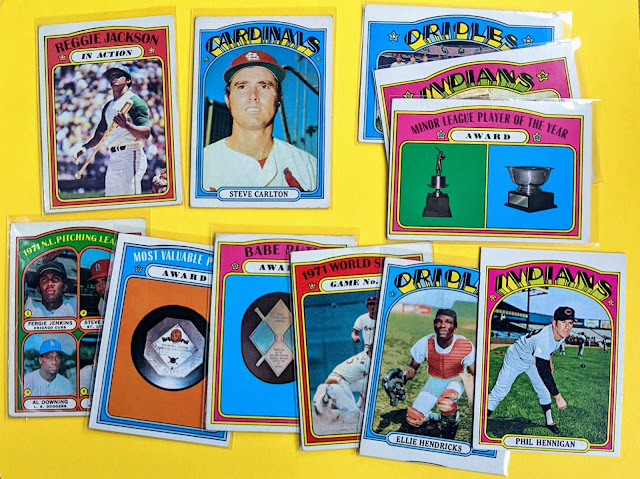 Given my desire to make a run at completing 1972 Topps by the end of the year, the highlight of the box for me has got to be the terrific selection of '72s, including a few treasured high numbers and my first of the "awards" subset. I've been PC-ing Reggie Jackson since I was a kid, and that's the first copy of his '72 In Action I've ever owned, so that's kinda cool. Wonder if he's admiring a homer or merely watching a foul. 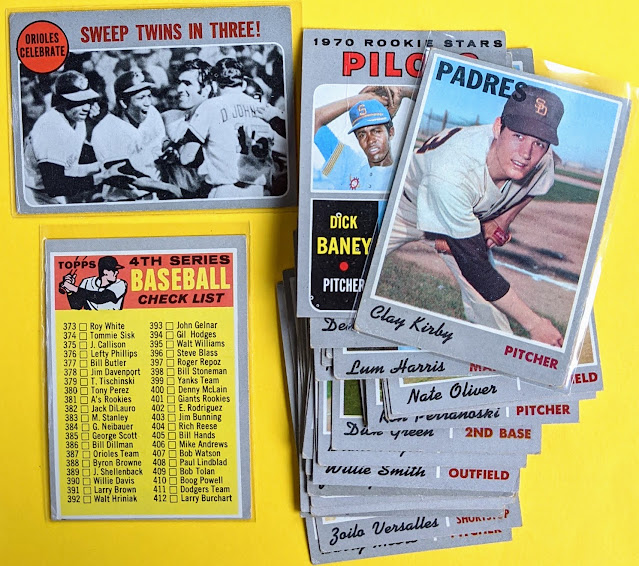 Here's a welcomed chunk of 1970 Topps needs for me. 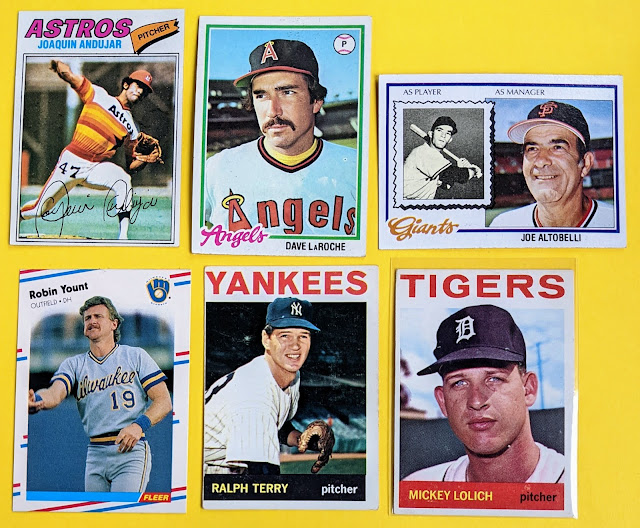 And a few other various needs, highlighted by a Mickey Lolich rookie.

Thanks, Turrdog! Good to hear you're happy with the return I sent you.

Next up are the spoils from a trilogy of PWEs Bo sent me. He had come into a lot of Dodgers cards and was looking to clear out some dupes.

Mike Marshall was a need for my '75 Topps setbuild. Still going after that black gold, too. 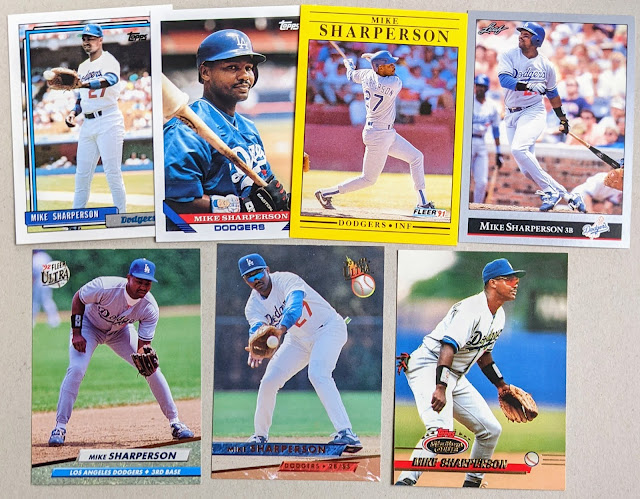 Shoring up my Sharpersons with some common cards I was missing. 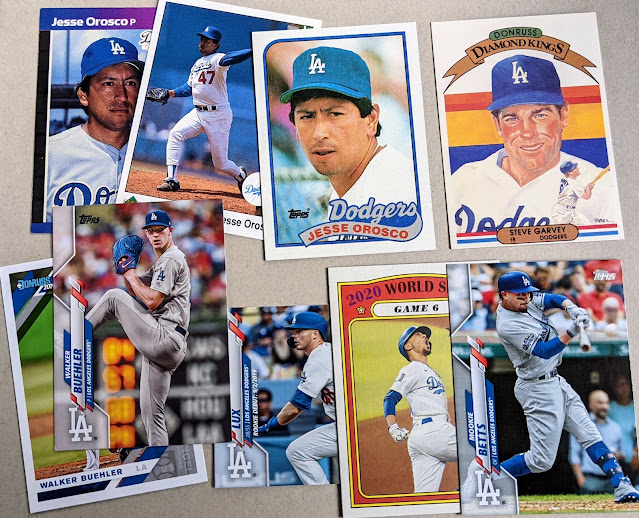 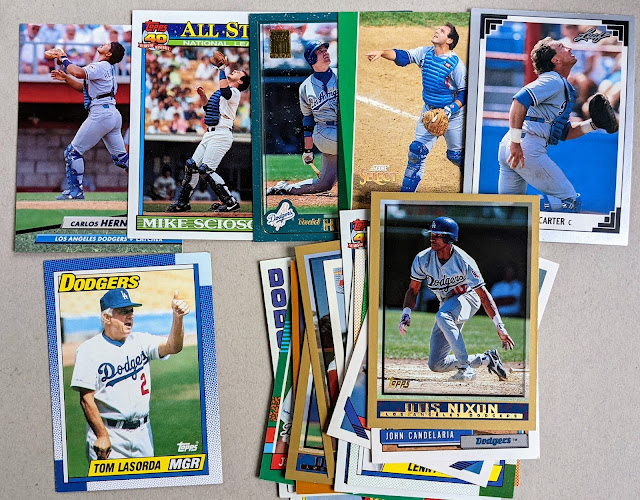 Minicollection additions of the "looking straight up" and "thumbs up" variety, as well as contenders for the Vagabond Binder and a few other various Dodgers along for the ride.

Next up is an impressive bubble mailer sent by fellow Portlander, madding at Cards on Cards. We used to exchange cards in person downtown, which was a nice way to save on postage, but since covid, we're not down there very often (I still go into the office once a week, though I believe Kerry is fully working for home these days.) 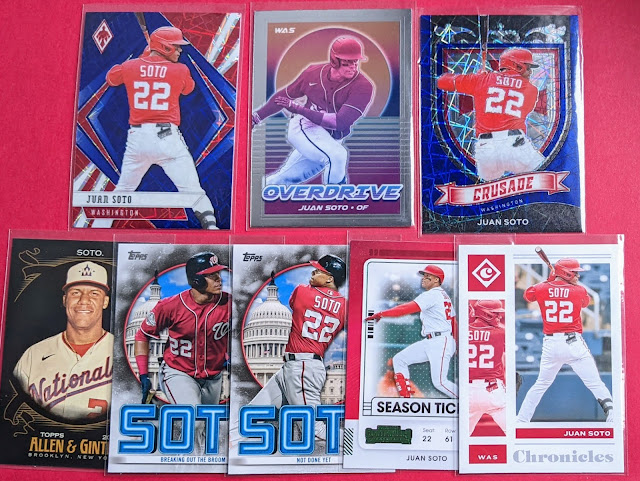 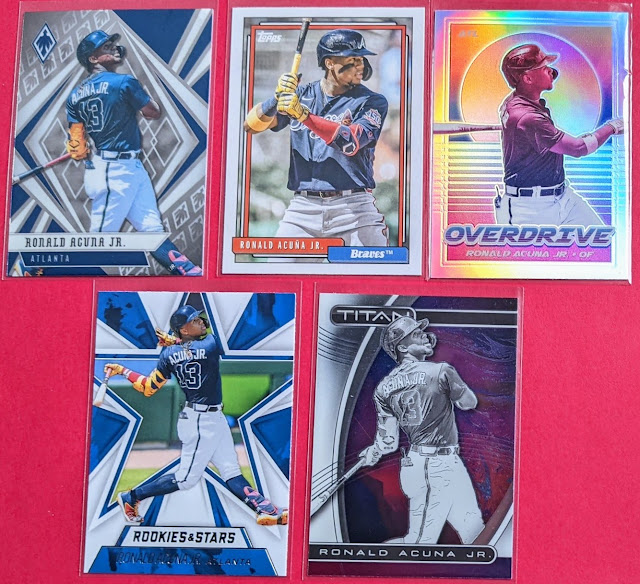 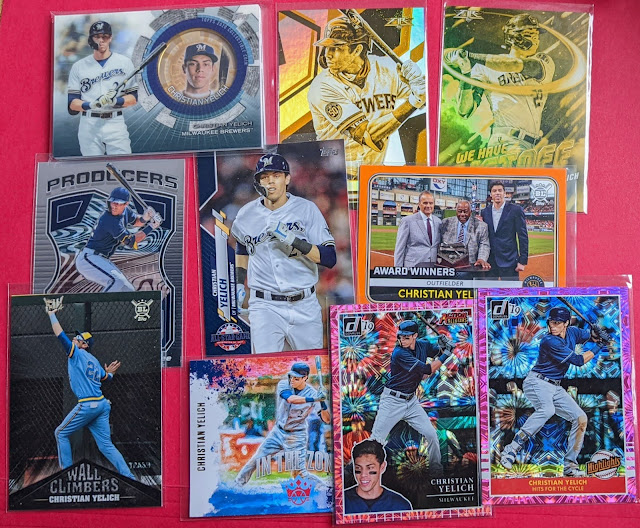 Pretty sure this lot gets Christian Yelich to 100 unique cards for me and soon to be retired from my wantlist. 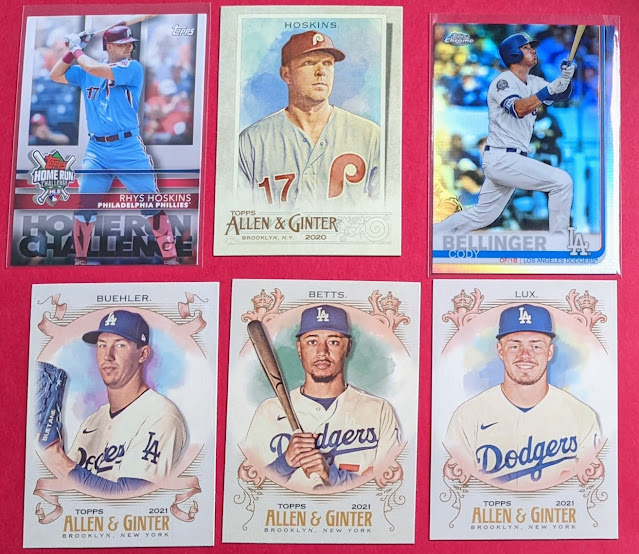 More active PC guys. (I collect too many Dodgers these days, lol!) 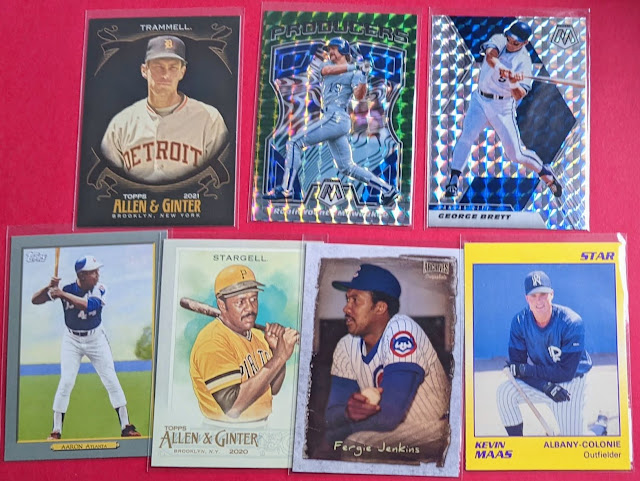 And some big names from the past. 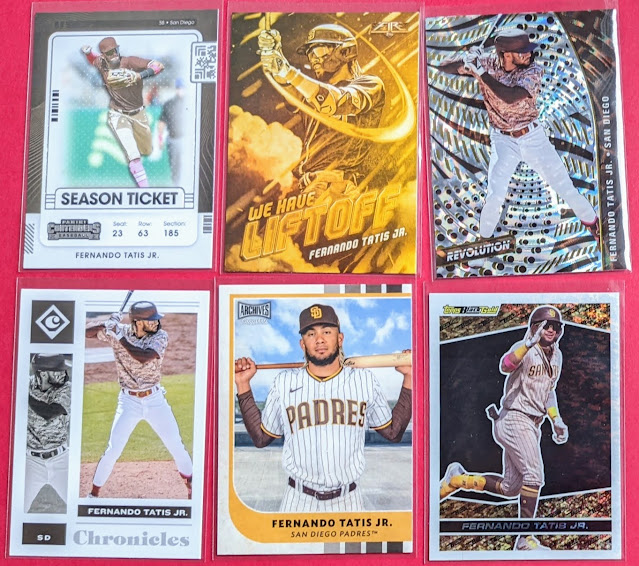 Kerry has generously helped feed my Tatis Jr collection these past few years. I'm also trying to go for the full set of those Topps Black Gold inserts. 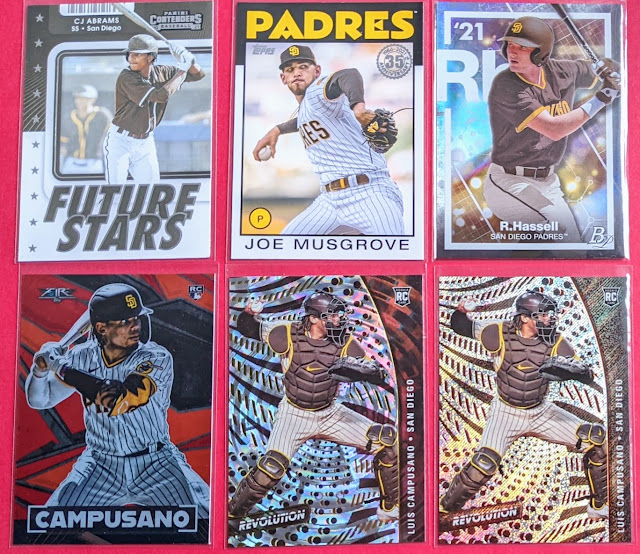 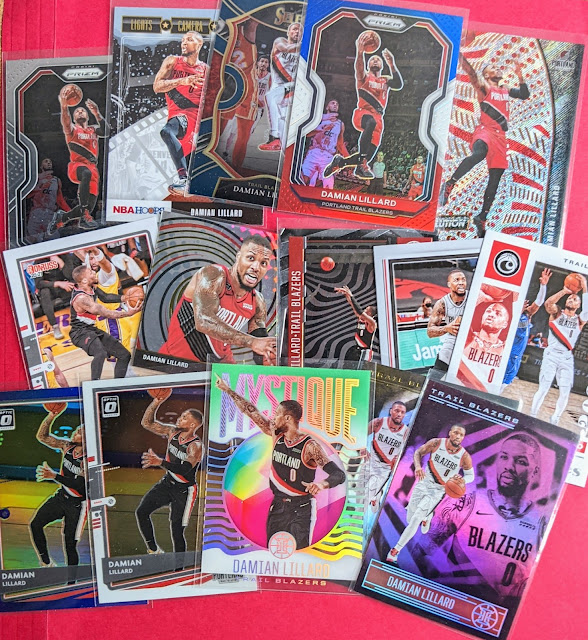 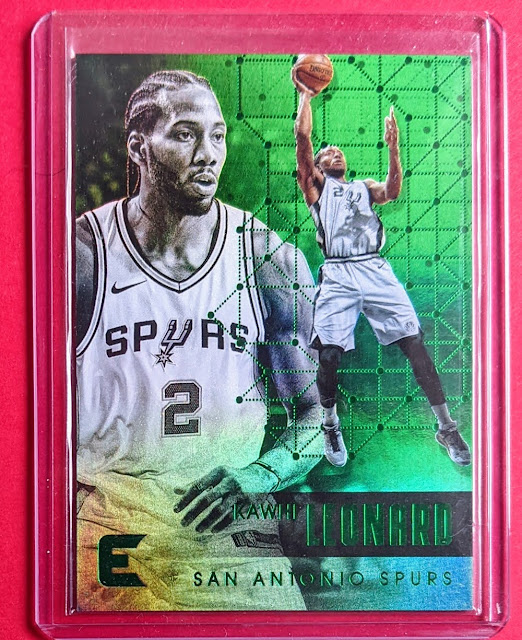 And a cool Kawhi Leonard.

Thanks again for the awesome bunch of cards, Kerry! Hope my return was ok. 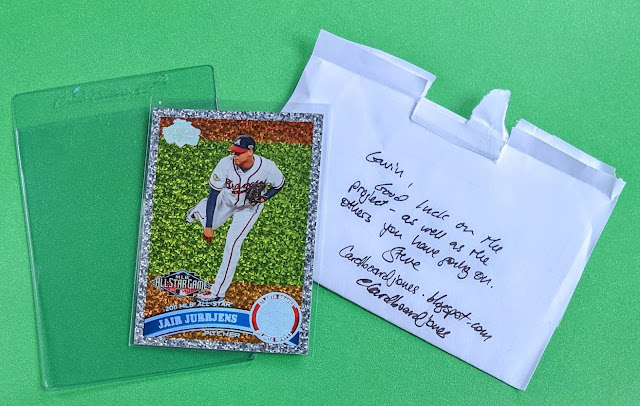 That'll do it for today. Thanks for reading.

I haven't had the mental bandwidth to get involved in a lot of the recent giveaway-type events on the cardsphere, but I was able to claim a spot in the Card Draft over at The Diamond King. Hopefully it was the first of many he runs. It's a pretty cool concept where a few folks send in a PWE full of random cards to him, then we involved all take turns selecting from the pot. I nearly biffed it, missing my first turn (not a huge deal since I had provided a rough preference list in advance), but remembered to show up right as I was put on the clock for my 2nd pick, and from there was able to ride along till the end. Anyways, here's my draft class.

Some active guys I collect. Shiny parallels from Panini help distract from lack of logos. 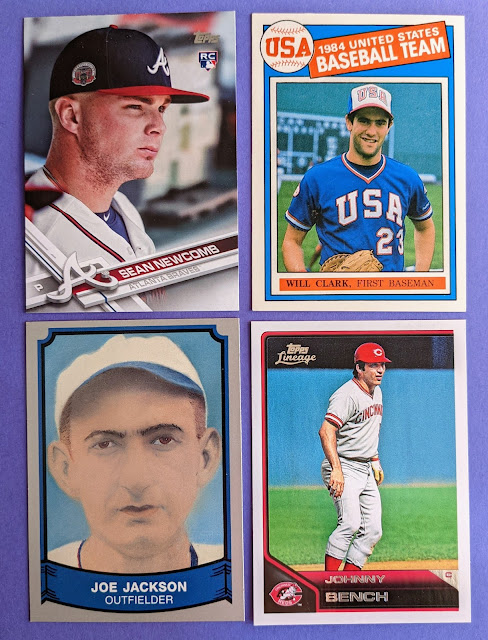 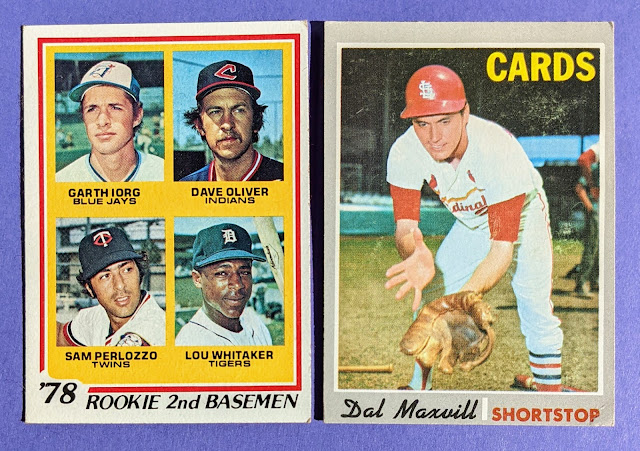 Finally, a pair of vintage cards. The 1970 Dal Maxvill was my first pick, filling the criteria of oldest setbuilding need of mine on the table. Dal's not exactly a high number, but up there at #503. I didn't need the Whitaker rookie for my '78 setbuild, but it was still on the board after a while, so I snatched it up. Sweet Lou isn't an official PC of mine at the moment, but I'll at least get him a page in my 9-Pocket PCs binder.
That wraps up a solid PWE in exchange for a few dupes/unwanteds I chipped in for the draft. (And I was happy to see that 9 of the 10 cards I sent in got drafted by others.)
Big thanks to Kevin for putting in the time, energy, and return postage to make the draft happen!

I've got lots more incoming cards to blog about, but that big post is taking a while to finish so figured I'd crank this out in the meantime. Thanks for stopping by.