Looks like the blog has been slipping away from me again. I'll try to play catch-up with some incoming cards of the non-purchased variety. 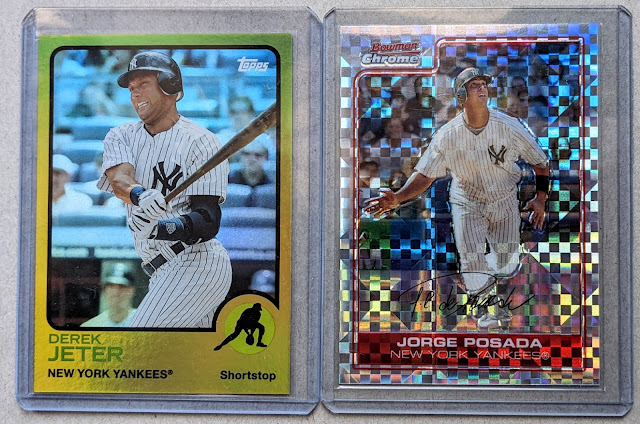 I got zapped for the first time in a while. I had owed Zippy Zappy a return since back before I moved well over a year ago, I'm embarrassed to say, and once I finally sent him something to help balance the scales, he promptly sent me back another great package. Zippy has been trying to lighten his collection for a while, focusing in on his Luis Torrens supercollection and the like, so sometimes I'm the lucky recipient of impressive Yankees cards from him such as a Jeter /199 gold parallel from 2014 Archives and a Posada X-fractor. 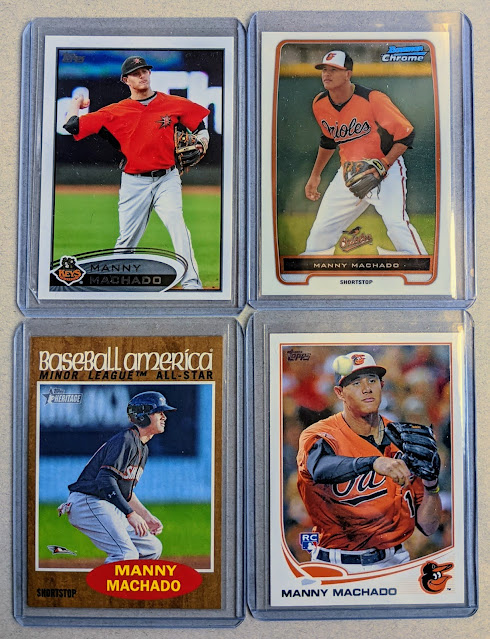 Happy to see some early Manny Machado cards in there, including a flagship RC. He's been earning his big paycheck this year, helping keep the Padres in contention. 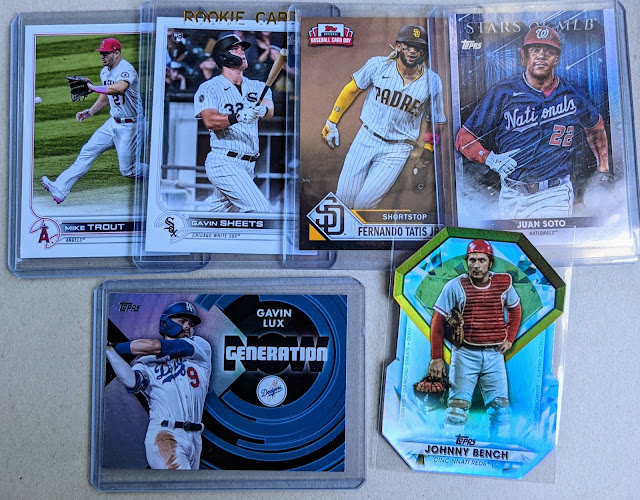 And some other highlights from the package. Pretty sure that's my first Gavin Sheets RC; I've been collecting him since 2017 when he started getting draft pick cards, so that's nice to see.
Thank you for the great cards, Zippy!
------o
This next package was a crazy one. I had a moment before dinner opening mail, and I cut open this bubble mailer and out falls a stack of loose cards and a green rock. WTF? I thought it might be some sort of mob threat or something nefarious like that, but it was time to eat so I didn't get to look too closely and was just confused for a while. 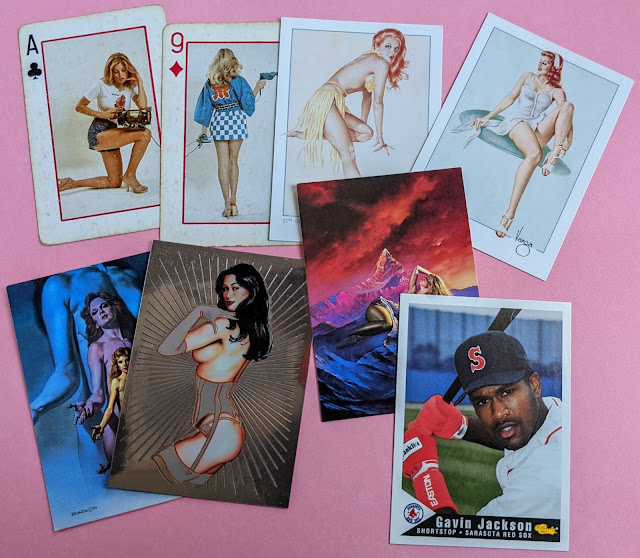 But turns out it was only a friendly mailing from Bob at Best Bubble. He included several cards, mostly illustrated, for my Women on Cardboard minicollection, plus an unfamiliar Gavin I was glad to see in the stack. 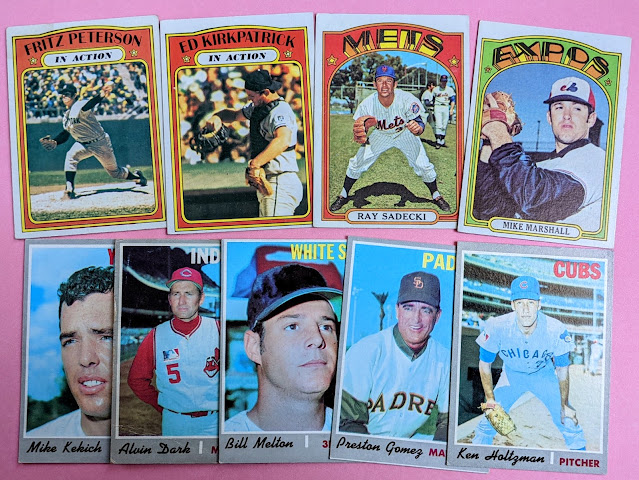 The ladies were nice and all, but it was seeing all the vintage needs that really got me excited (non-sexually, obvs!) 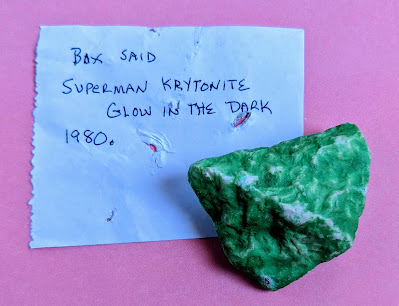 And that green rock turned out to be a terrific addition to my "glow-in-the-dark museum" as I call it. (My basement bathroom has a bunch of glowing stuff on display.) 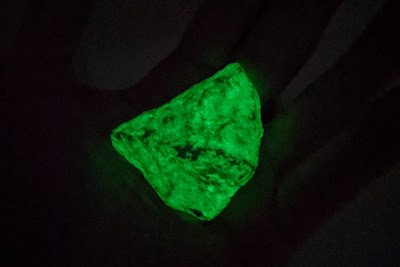 It glows pretty well! From the note, this was apparently marketed as Superman Kryptonite from 1980. Ostensibly just a rock with a coat of glowing paint, but must've been fun for kids to pretend it's a remnant from the planet Krypton. I did a little curious searching online and from what I can tell these rock toys first appeared in 1977. If you do a search for "Superman kryptonite rock glow" you can check out the packaging they originally came with.

Neat stuff! Thanks, Bob. I hope my return was sufficient!

Also earlier this month, Padrographs Rod stopped by to kindly hand off a bunch of cards. Included was a near-complete set of 1991 MusiCards... very helpful, as I was finishing up a 2nd master set of the stuff, and thanks to Rod I'm now also not too far from completing a 3rd. Sure, why not! I'll likely talk more about all that in a future 1991 MusiCards Blog post.

There was also a brick of country music cards and Stranger Things, but most relevant to this blog was the box of random baseball cards. 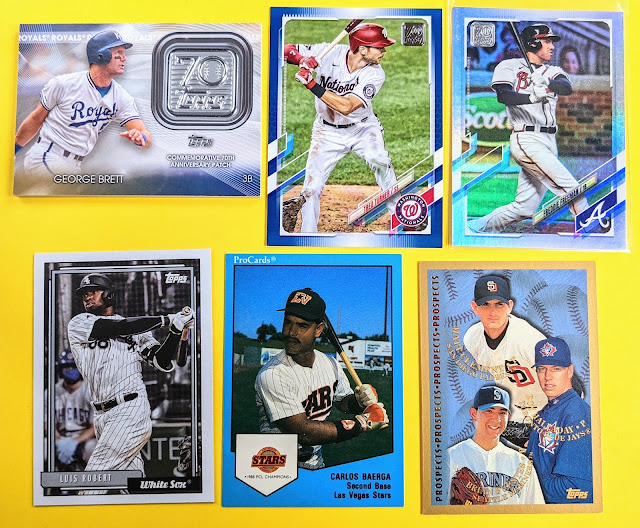 Plenty of keepers among them, with a few highlights pictured above.

Always a treat, Rod.. thanks a lot! I'll happily remain on standby for any Photoshop work you need a hand with, and am always up for any cards you're looking to thin out as you tighten up your collection.

Last batch of cards to cover today comes from Dimebox Nick, our first swap in some time. I'm working on a 3rd series of music customs for his dad, so the package was a mix of cards as "payment" from his pops, plus several cards Nick had thoughtfully set aside for me. 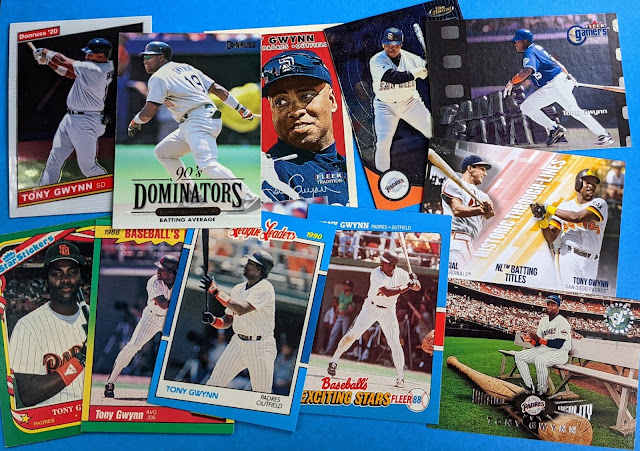 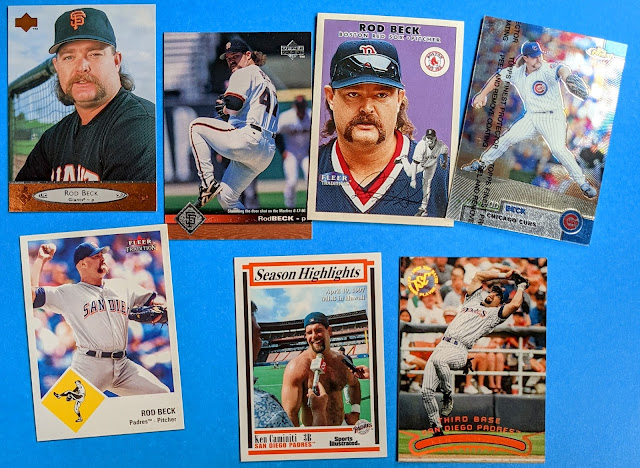 Rod Beck and Ken Caminiti both left us early due to substance abuse issues, but hey, still fun to collect their cards. Just gotta remember the good times and take it as a cautionary tale. 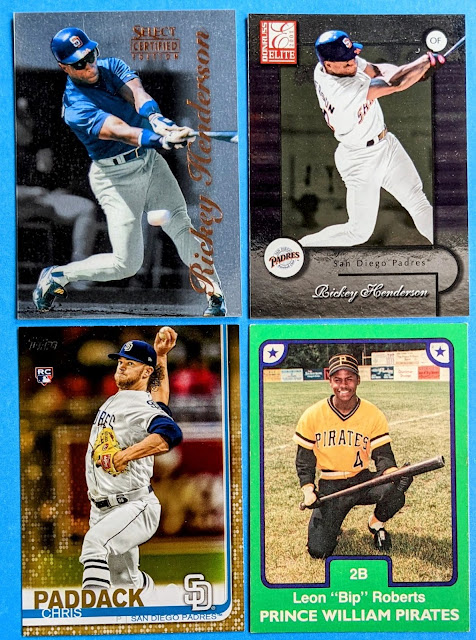 More notable Padres. Always love seeing Friar Rickey. Chris Paddack still has a lot of promise despite nagging injuries. If I didn't already own the Bip minor league card, it probably would have been the highlight of the package.. still a sweet dupe to have! 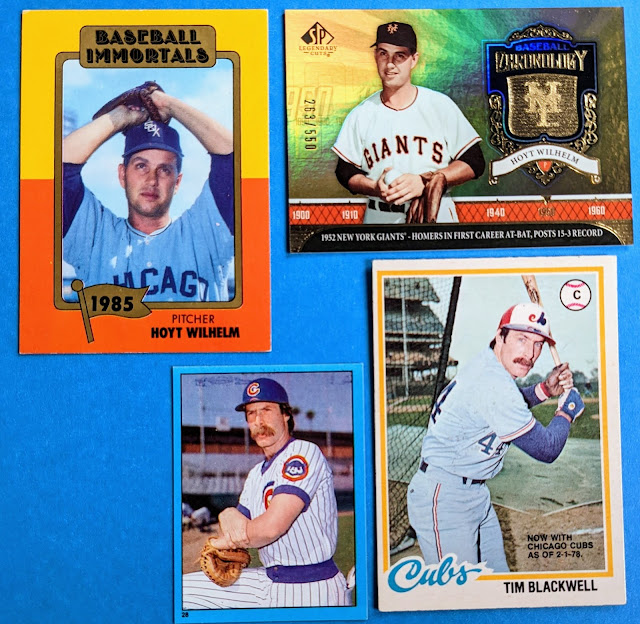 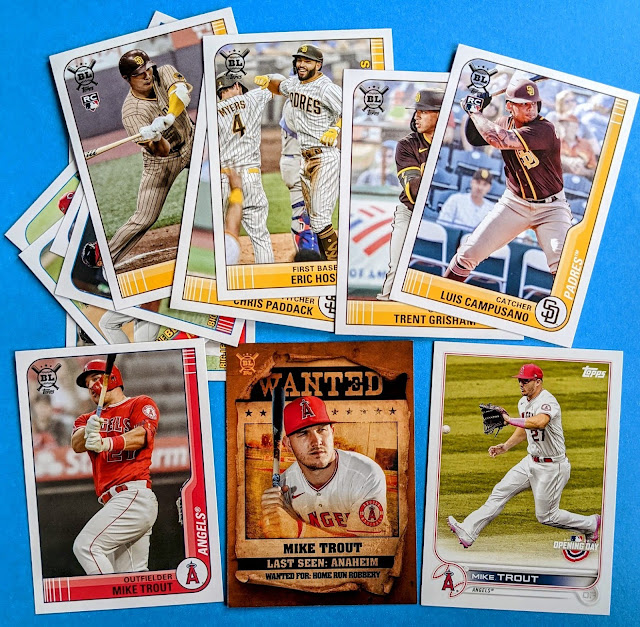 Nick gave me what I assume must be at least close to a complete Padres team set of "2021" Topps Big League, my first in-hand look at the tardy product. Nice Trouts there, too, plus his 2022 Opening Day card to complement the flagship version I earlier received from Zippy. 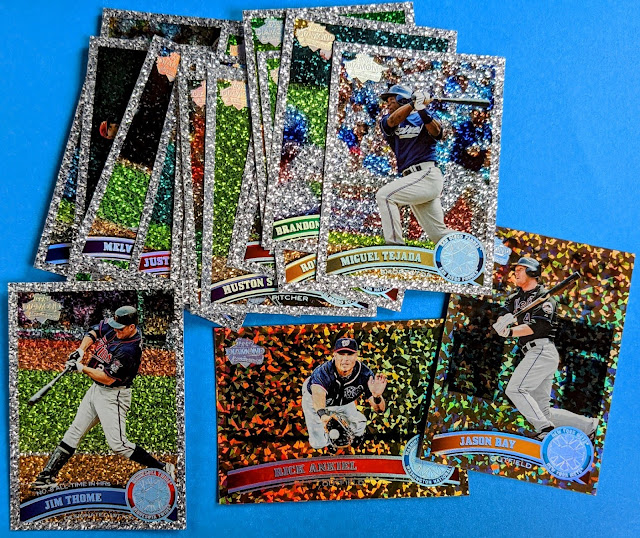 Check out this cache of 2011 Topps parallels! Turns out over half of these were dupes-- including a few that Nick himself had previously sent me already, LOL-- but still brings a smile to my face to see these guys sparkling away in a group of incoming cards. Chances are I never finish this ridiculous parallel setbuild of mine, but hey, "only" 572 cards remaining and I've got the Trout.. so never say never. 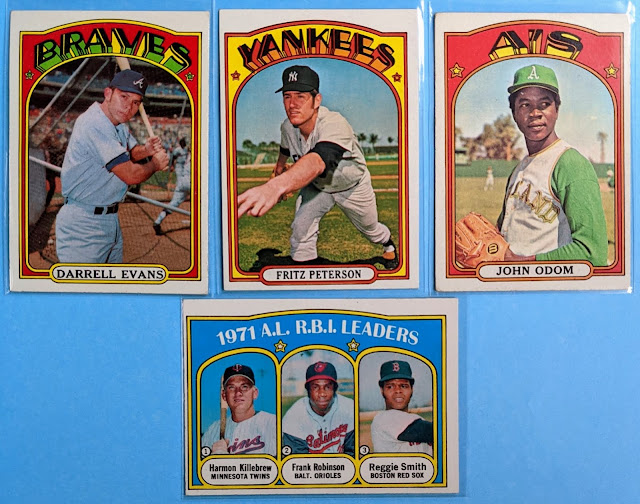 Now we're getting into the cards from Nick's dad. Again, he was interested in commissioning another series of music customs from me, and these days the best way to get me to do something for you is to lend a hand with my 1972 Topps needs.
And saving the best for last... 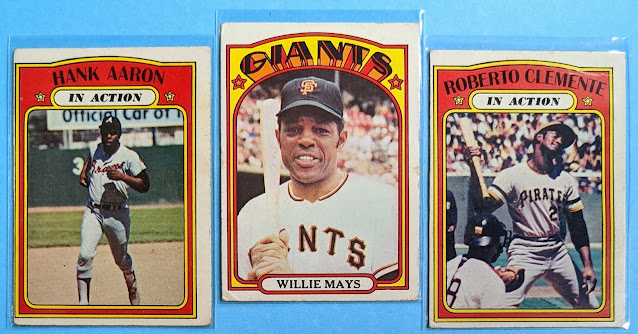 Boom.. Awesome trio of all-time greats! This makes for a big step in my journey towards completing the beast that is 1972 Topps Baseball.

Big thanks to Nick and his pops! I'll finish up those customs and get a solid return to you soon.

A quick "state of the blog"...
Posts will likely continue to be sparse here through the summer. I've been a bit overwhelmed with other stuff and "typing about cards" often ends up getting bumped off of my schedule. Been distracted by a few DIY home improvement projects in the works, for example. But I've got plenty of blog-related ideas kicking around too, so expect me to get back into posting at a better pace again eventually.

Thanks for reading and hope you're all having a pleasant holiday weekend.