Now that the season is over, let's take a look at how pro ballplayers named Gavin did in 2017. Let's start with the few Greatest Gavins who make up the majority of this minicollection of mine.

Gavin Cecchini - Mets
Gavin Glenn Christopher Joseph Cecchini played 32 games with the Mets in 2017, but barely hit over the Mendoza Line with just one dinger. And after batting comfortably over .300 in the minors the prior couple seasons, he only mustered .267 in AAA. In the field, he switched from short to 2nd base to make room for top prospect Amed Rosario. So, not a great year for the 2012 1st rounder, but hopefully he rebounds and sticks with the big league club at least in a backup role in 2018. 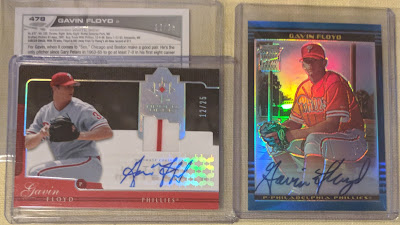 Gavin Floyd - free agent
Floyd was with Toronto in spring training, but didn't actually pitch in any games and was released at the end of camp. He didn't catch on with any other club, and while I don't think he's officially retired yet, his career seems to be over. Bummer. Oh well, he had a slightly above-average Major League career (101 ERA+). Hats off to ya, Mr. Floyd. 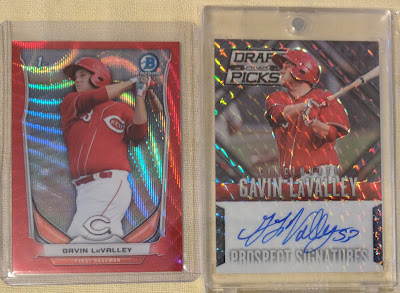 Gavin LaValley - Reds (minors)
LaValley split 2017 between Daytona (where he was named MVP of the Florida State League All-Star Game) and AA Pensacola. His output dipped after the promotion, but still a solid year overall. Looks like they're playing him only at 1st base now (rather than splitting time at the corners in his earlier seasoning). Joey Votto is signed through 2023, but hey, if the Reds need a first baseman in a couple years, LaValley should hopefully be ready to go by then. 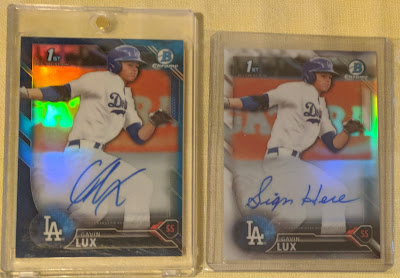 Gavin Lux - Dodgers (minors)
Lux spent the whole season with the Great Lakes Loons. His batting average was down from his previous year in Rookie ball, but he hit 7 homers and stole 27 bases, both way up from 2016. His natural position is shortstop, but they also gave him a lot of starts at second base. With Corey Seager not going anywhere anytime soon, moving to the other side of the bag is probably good for his Major League aspirations. But Lux only just turned 20 last month, so no rush. 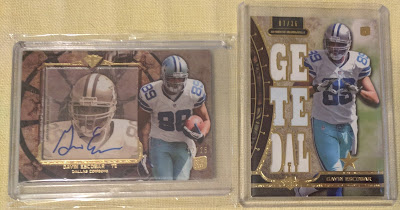 Gavin Escobar - football
Switching sports for a moment, Gavin Escobar hasn't been doing too well this year in the NFL. The Cowboys cut him loose after the 2016 season. Then he was with Kansas City Chiefs' practice squad for a few months earlier this year. More recently, he spent a few weeks with the Baltimore Ravens, getting into a couple games but not doing much, and is currently a free agent, I believe. I'm hoping he gets things going with another team, but as it stands, doesn't look like the many autos of his I own are going to appreciate in value much for me going forward. Seriously, I can't think of any other player I have more autos of.

Now let's hit some of the less-heralded Gavins in minor league baseball. Just researching for this post-- Wow! I think it's safe to say 2017 set the record for most Gavins ever in pro ball at one time. I might have to cool it on collecting cards of guys named Gavin just because it's becoming too popular of a name nowadays. Once Bowman starts having multiple Gavins in the same product (which I'm sure is any year now), I'll probably have to throw my hands up in defeat. (Update: since I started drafting up this post a while ago, it has happened: 2017 Bowman Draft includes both Gavin Lux and Gavin Sheets.) I'll try to get an autograph for each of them, probably, and maybe small PCs, but no rainbowing or heavy collecting unless a guy really calls to me (like, imagine if a guy from my high school named Gavin got drafted? I'd have to collect the shit out of his cards! ha.) But anyways, here are some more Gavins who were active in 2017: 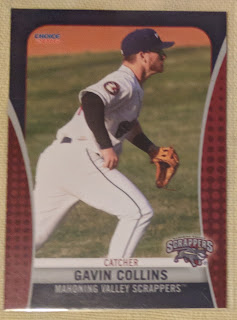 Gavin Collins (2016-2017) - Indians (minors)
A third baseman (and occasionally catcher) in the Indians chain, Collins hit .272 with 12 taters in A-ball this past season. Not too shabby. 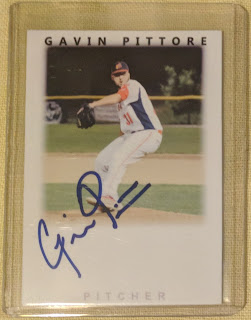 Gavin Sheets (2017) - White Sox (minors)
Sheets was taken by the White Sox in the 2nd round of the 2017 draft out of Wake Forest University. He hit .279 with 12 doubles in 56 games in his first season as a pro. From a card collecting perspective, he's got a bunch of 2017 cards thanks to Leaf and Bowman Draft. I'm not going to go too buckwild on him, but I've picked up some of his Leaf autos and will track down some Bowman cards soon enough. 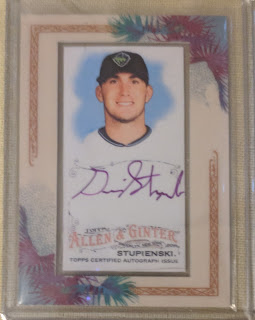 Gavin Wallace (2017) - Pirates (minors)
Attn: Zippy and Matt Scott: Staten Island native Wallace was drafted by the Pirates in the 15th round of the 2017 draft. He's a righty who made 13 starts with the West Virginia Black Bears last season, putting up a solid 2.65 ERA. 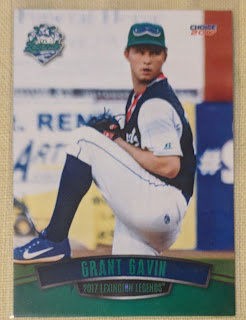 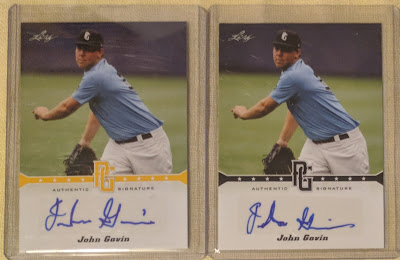 John Gavin (2017) - Giants (minors)
I've had a John Gavin "Perfect Game" auto from his amateur days for a couple years or so. Nice to see him get drafted in 2017. He's from the Bay Area, so he was likely pleased to be taken by his hometown Giants (8th round). His pro debut consisted of no earned runs in 16 innings over 12 rookie league games. Impressive start to his career! 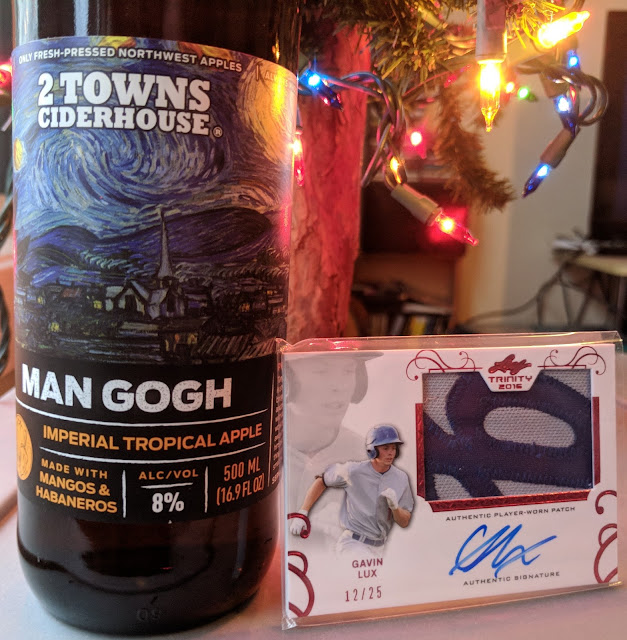 Beermas mixes things up with a cider tonight. Should be good. It's paired with a nice auto/relic of Gavin Lux featuring a chunk of the "g" in Dodgers, by the looks of it. 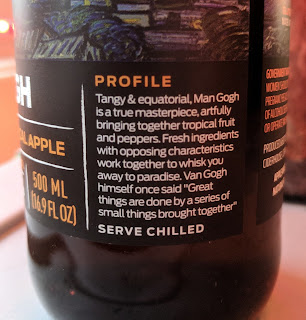 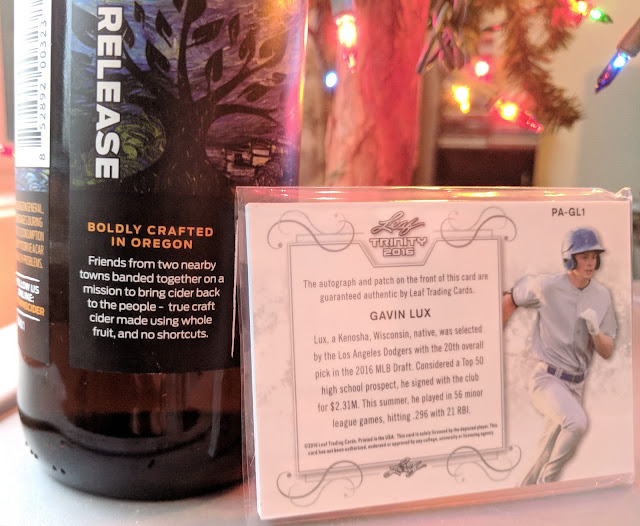 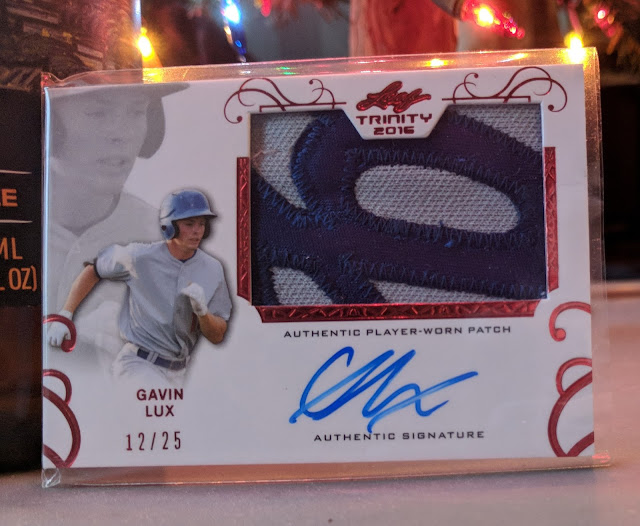 Good stuff. Thanks for reading!
Posted by defgav at 4:51 PM