Working on sorting the haul from my dimebox dig over the weekend. This post is for all the vintage I've sorted out. Tough for me to pass up pre-1974 cards for a dime each, regardless of condition. 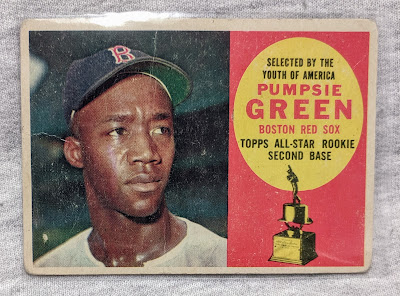 Pumpsie! While most of the cards I pulled for my stack came from one particular dimebox I was parked in front of, I did notice a cache of beautifully warped vintage cardboard in a different box. I kept my eye on it, and once the guy who was going through that box moved on, I reached over and snatched them up without really even looking at them. So that gave me a nice surprise when I got home and found Pumpsie Green with the glorious rookie trophy among them. 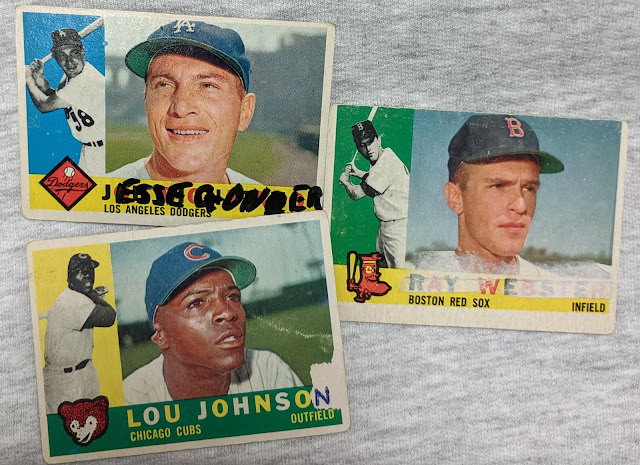 Had I looked through the stack, I probably would have left some of them there. I'm ok with rounded corners and some creasing, but writing on a card, especially the front, will usually sour it for me.

But overall they were in good enough shape. I have no plans to work on 1960 Topps, so these will likely go to my vintage trade box, checking to see if Bo needs any of them (If anyone else is working on '60 Topps without concern for condition, let me know.) 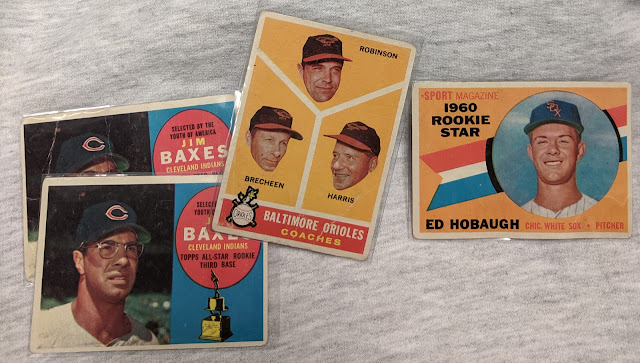 Looks like I've already got these 3 in my '70 Topps setbuild, but they might be condition upgrades. Love that Al Oliver card (it's his birthday today, btw). 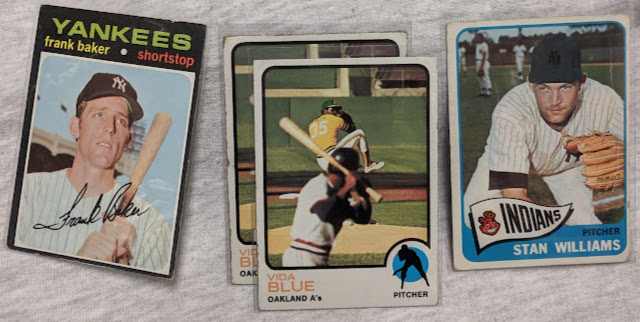 And more from sets I've already completed, but I'll check in case they're upgrades for me. And hey, Vida Blue is a PC guy, so I might be able to use one of them there. At first I assumed the darkened-in Yankees logo on Stan Williams' cap was the work of a kid with a pen-- but nope, looks like that's just how Topps made that card.

And that's a wrap on the dimebox vintage. Nothing too incredible (besides maybe the Pumpsie rookie), but hard to beat a ten cents a pop for classic cardboard. A few of these might make it into my "flagship binder" (one page per flagship set) and I'd assume several will become trade fodder for my next swap with Bo, hopefully turning some of these into set needs for me.

More dimebox highlights coming soon. Thanks for popping by.
Posted by defgav at 3:25 PM