Pull-Tab Awareness Week 2020 Has Been Cancelled

Sorry guys, but in yet another blow due to the pandemic, Pull-Tab Awareness Week 2020 has been cancelled. There's just too much going on in 2020 as it is. I don't know if America could process the magnitude of a Pull-Tab Awareness Week with everything else that's already going on. But feel free to revisit Blue tape and pull tab awareness week 2019. Hopefully we'll be back in full force next year.

In other news, my buddy who moved up from San Diego to Portland recently is doing great up here. He works in construction, a bustling field in Oregon, and has already been all over the state on jobs. It's been long hours, but I suppose if you're recently separated, working a lot is good to keep you occupied, not to mention making that $$. 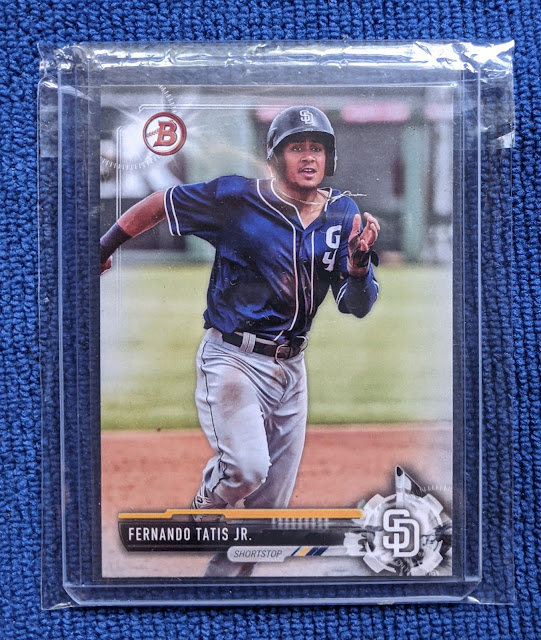 Anyway, he's coming over this afternoon to hang out. My wife and I just got a Nintendo Switch, so we'll play some video games and maybe watch a movie. I plan to give him this Tatis to try luring him into card collecting again. We collected when we were kids, and I think he still has a handful of cards but isn't really an active collector. But hey, our team the Padres are on a winning streak and Tatis might be the hottest name in the game at the moment, so perhaps the stars are aligned for my pal to re-enter the hobby with a little nudge. I've got several copies of this 2017 Bowman, so I don't mind letting one go as a gift to an old friend. 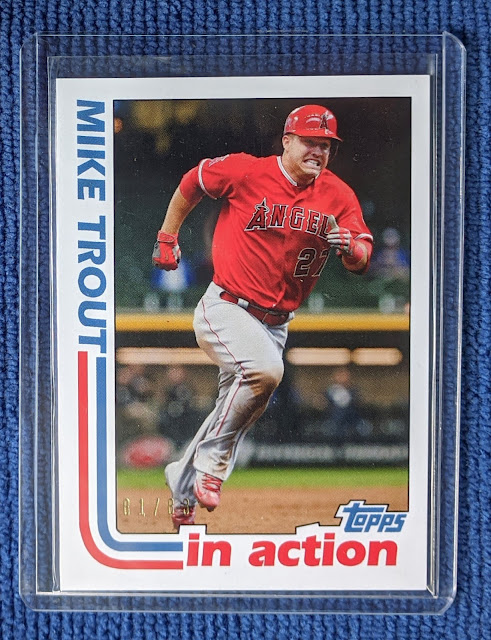 Speaking of cards featuring a five-tool player motoring on the basepaths, here's another card to show off. It's yet another of those 2019 Topps Transcendent VIP Party "Through The Years" Mike Trout cards. I already have a 1990 Record Breaker and a 2011 pseudo rookie variation, but wanted one more to get to the magic number of 3. I've always liked the 1982 Topps In Action design (use it often for card gifs I make) and so this was a good option to throw a bid on. 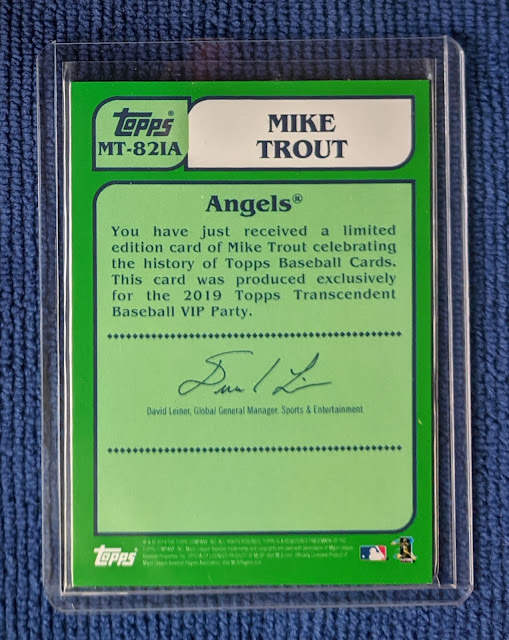 As with the rest of these, they did a nice job recreating the back design, but then phoned it in when it came to the text. But yeah, a sweet addition to the Trout PC.

Thanks for stopping by and remember to use blue tape and make pull tabs!
Posted by defgav at 11:36 AM