Baseball, I Love You But You're Bringing Me Down

In my continued efforts to slip away from baseball of today, I finally cancelled my mlb.tv subscription. I was hesitant to do it because we signed up a few years back when my wife was in grad school, so we got a discounted "student rate" that never changed. But I just didn't watch many games last year.. and other than morbid curiosity, didn't have much desire to watch a game during the covid era we're living in. To their credit, canceling was painless and the refund for 2020 came the next day.

Then I watched the 1971 All-Star Game on YouTube and that was a lot of fun. That's the good stuff! I need to do more of that.

Our new puppy still has us running on fumes these days, but I'll try to crank out this post while the terror sleeps. Here are some random recent pickups of mine. 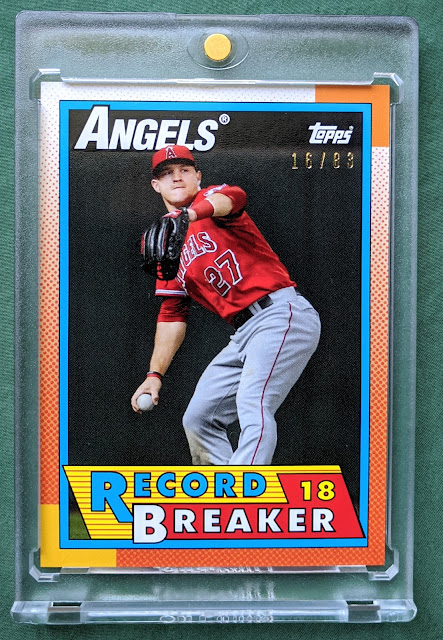 I went after a few similar Kris Bryant party cards back in 2017.. figured I'd add a Trout or two from last year's party. I'll never totally turn my back on current baseball because of guys like Trout who I've enjoyed following over the years and I'm curious how their careers will wind up.

Earlier this year I was excited to embark on somewhat of a "theme" year on the blog as I celebrated 30 years of being a card collector. But 2020 sucks so bad that I'm not really going that route anymore of focusing on my introduction to the hobby in 1990. But I can still slip in a little of that sentiment. Yes, I love 1990 Topps, reminding me of that year first ripping open packs. The Record Breaker cards make me first think of the Vince Coleman, but Rickey and Cal had RBs too. 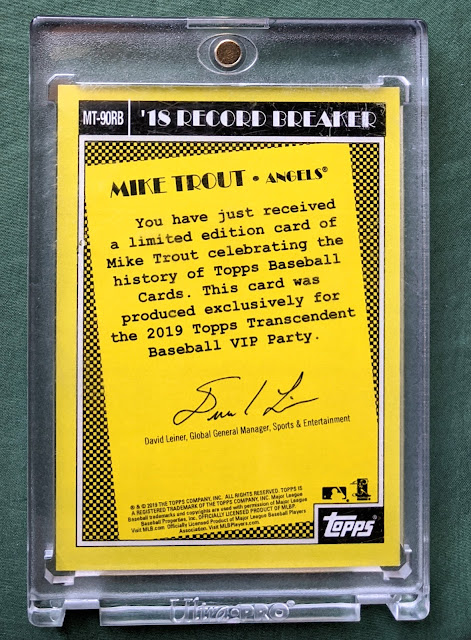 The back doesn't mention any particular record Trout broke in 2018. Eh, he probably had one in there somewhere. 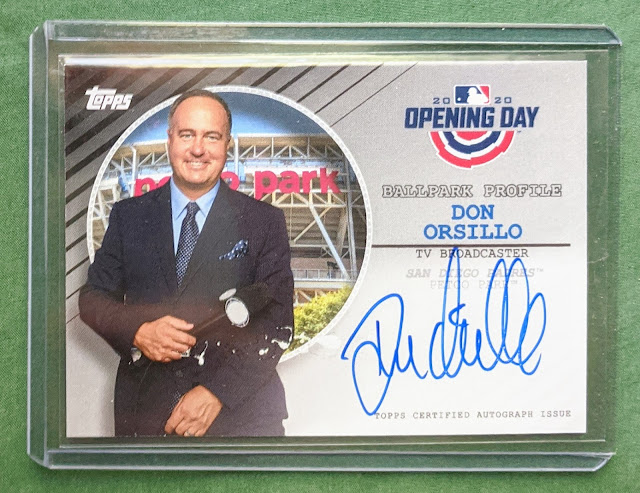 Looks like I won't be watching any Padres baseball this year beyond occasional highlights. If they actually end up in contention, I might be kicking myself for cancelling, but that's a big "if" and an above-average "maybe". But yeah, their main play-by-play guy on the broadcast, Don Orsillo is pretty good. (And of course I love Mark Grant, their main color-commentator for the past many years.) Snagged this Orsillo auto from 2020 Opening Day for a few bucks. Didn't realize at the time I bid that it's got some weird printing flaw across his stomach. That white splattering is not part of the design. It isn't paper loss or other damage, just a weird printing issue. But I didn't bother trying to return it or anything since it wasn't that much and it's not like I bought it as an investment or anything. I'll just consider it the "spunk-splatter eBay 1/1". 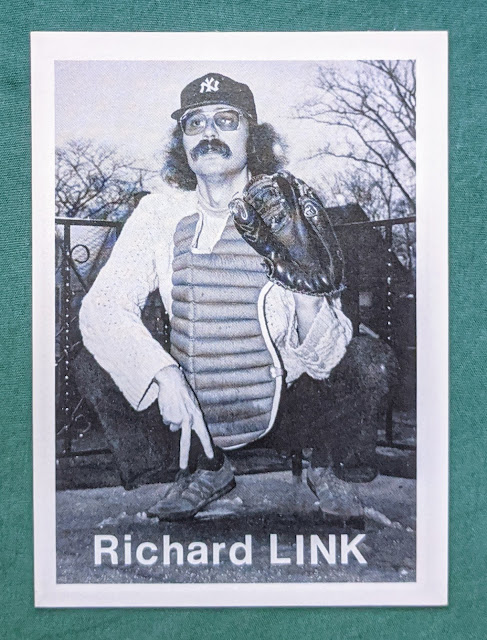 I found out about the 1975 Mike Mandel Photographer set thanks to a post at Nick Vossbrink's blog (that linked to an older post he did at the SABR card blog) and had to snag myself a specimen. This one was among the cheapest I found available, and I figured even if I decided not to hang onto it, there are a few collectors out there with "tools of ignorance" minicollections (cards featuring catchers in their gear) that this would fit into. But this would be a bit of a cheat since Richard Link isn't really a catcher, rather a professional photographer playing along for this quirky oddball set. 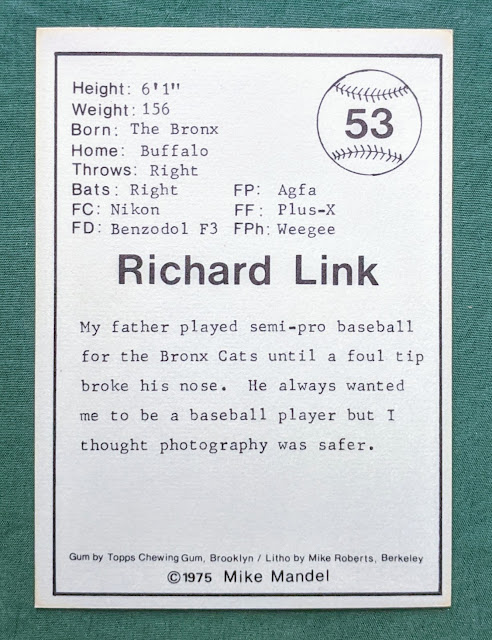 Photographer vitals! Couldn't find much on Richard Link with a google search other than pages talking about this card, so that lack of "big name" recognition might have played a part in it being affordable. I don't know much about photography nor the field's history like Nick V. does, but I still think it's neat. Good thing Richard didn't go by "Dick Link" or that might give the wrong impression. It's pretty rare you catch me posting a Dick Link on my blog, after all. (A boob link, sure.) (The "spunk-splatter eBay 1/1" earlier does me no favors here.) 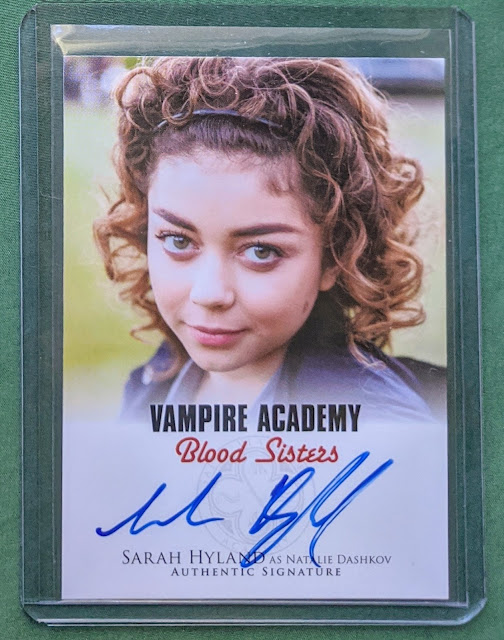 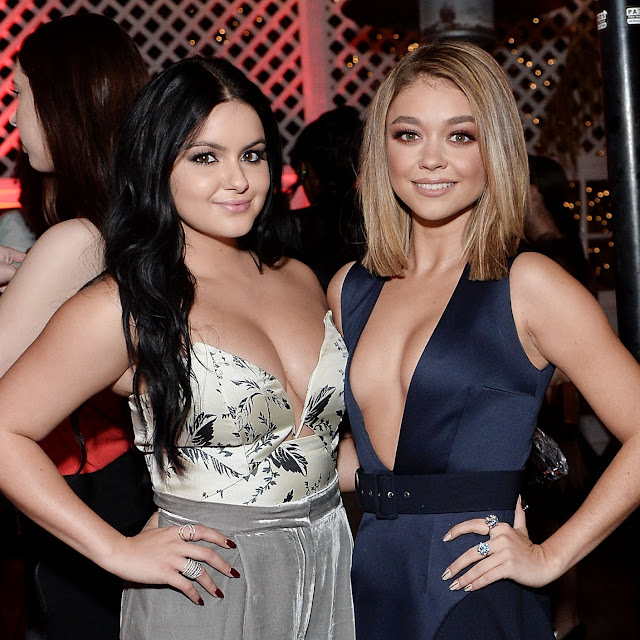 We watched the show for the first few seasons when it was airing, then took a hiatus for a while, but are now finishing up the last few seasons. Sarah and tv-sibling Ariel Winter sure turned into a pair of impressive young women. Inspired me to look for certified autos, and ended up with the Vampire Academy one. I should make a custom overlay for it someday with a more attractive photo. 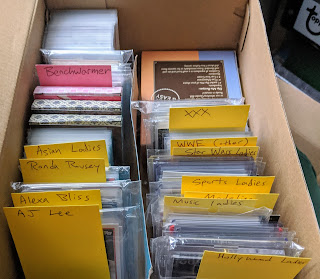 Spurred by Zippy asking me about my Alexa Bliss dupes (PWE mailed out yesterday, btw, Kenny), I finally semi-organized my Girlie Card minicollection into sections the other day. The Sarah Hyland auto will go into the "Hollywood Ladies" section. 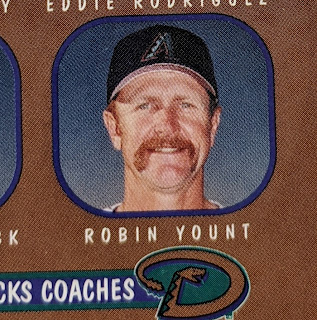 Robin Yount as a Diamondback? It happened! 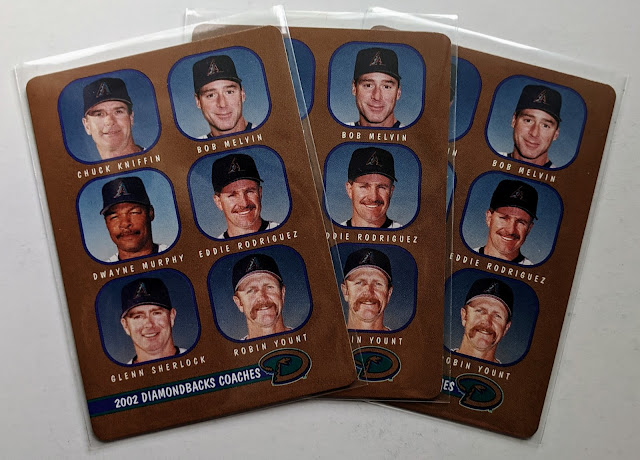 They seem kinda tough to find, but I ended up with 3 of these 2002 Keebler cards from the same seller. Figured the pair of dupes would be solid trade fodder for Yount PC'ers or other fans of "short-term stops"-type cards of this nature. Let me know if you're interested in swapping me something for one. . .

But really though, I'm kinda putting trades on hold right now, just trying to finish up things already in the works and then I plan to chill on trading for a while. This puppy, man.. she's a demon! My wife and I are exhausted and just hoping some of the attempts at training start getting through eventually. 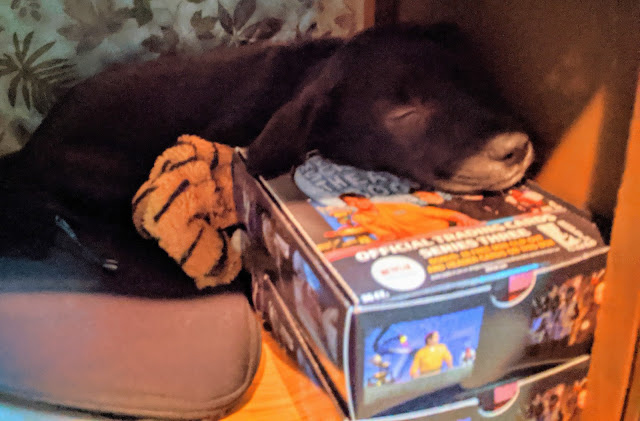 This photo is from the first night we brought Ruby home. She found a headrest on a couple boxes of MST3K cards. But turns out she's a chewing fiend, so the door to my "office" (card room) will remain closed until she shapes up. No losses yet, but I must remain vigilant. 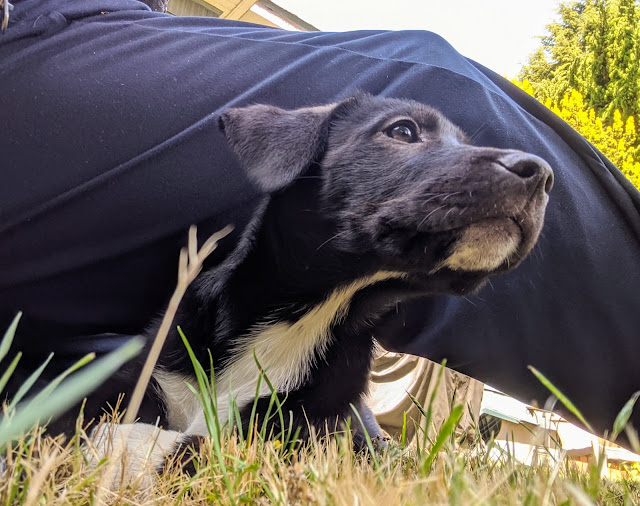 Here's a nice photo of Ruby from the other day. She's a cutie when she not (play)biting you, or chewing on things she shouldn't, or eating things she shouldn't, or peeing in the house, or aggressively begging while you cook and eat. But we've got a new gameplan now with help from my cousin-- an accomplished dog trainer who's trained dogs for Heisman Trophy winner Ricky Williams among others-- so here's hoping this li'l pup's behavioral issues get in check soon.


Thanks for reading. I'll need to do a "trade roundup" post soon because I've got a lot of cool stuff in the past couple weeks. So look out for that and see ya then. Have a great weekend!
Posted by defgav at 4:10 PM