Who the hell is Cesar Geronimo? (2004 Retired goal update)

This is another update on my first (and hopefully last) autographed card set collecting goal. I'm attempting to get all 76 certified autographs from the 2004 Topps Retired Signature Edition set. It's been quite a financial strain, as I'm sure you can imagine, since this set includes a lot of first-ballot guys from back in the day like Stan Musial and Ernie Banks.

There are, however, also several lesser-known guys. Ron Swoboda, for example, is a guy I wasn't familiar with before collecting this set. He didn't have a very noteworthy career besides getting hot near the end of the 1969 season, helping the Miracle Mets win it all that year.

Another guy I hadn't heard of is Cesar Geronimo. Apparently he played for the Reds at some point. That's all I know about him. You can post an informative comment if you like, but otherwise I'll just stay in the dark for now and enlighten myself on his illustrious career at a later date, probably when I get his auto card.

What's crazy is that said card was on eBay recently, and I bid on it, but it ended up at nearly $70 with shipping! I was not the winning bidder, sorry to say.

I did, however, get the Bob Gibson and Ozzie Smith cards I needed from the set this week for less than that. Ozzie for about $60, and Bob for about $50. Now these are guys I know of! How did the little-remembered Geronimo go for more than them? It kinda boggles my mind. I guess a couple Cesar fans just bid it up between themselves? Oh well, hopefully next time it goes for a more reasonable price and I'm able to add it to my collection.

I've also gotten a few other cards towards my goal since the last time I posted about this set. I've currently got 56 down, with 20 left to go. (If/when the day comes I complete my goal [or at least am on the cusp of doing so], I'll do a breakdown giving each card its due.) 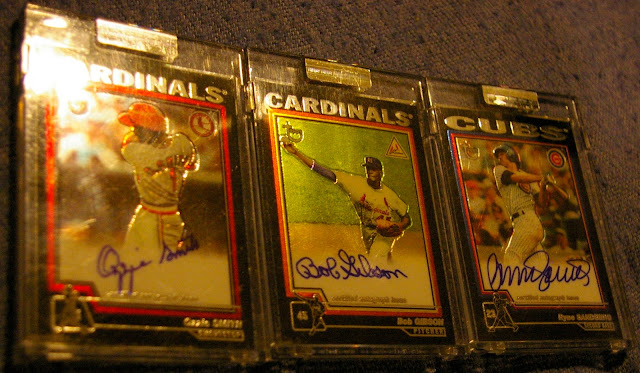