Catching up with the Classics: 1990 Yellow

Buying current card product to open isn't really my thing anymore but I occasionally get a ripping fix elsewhere. For example back in January 2021 I opened a 1991 Classic box. I recently went back to that well and found a couple more inexpensive Classic offerings that were still sealed. Let's work backwards and hit the one I scored from 1990. 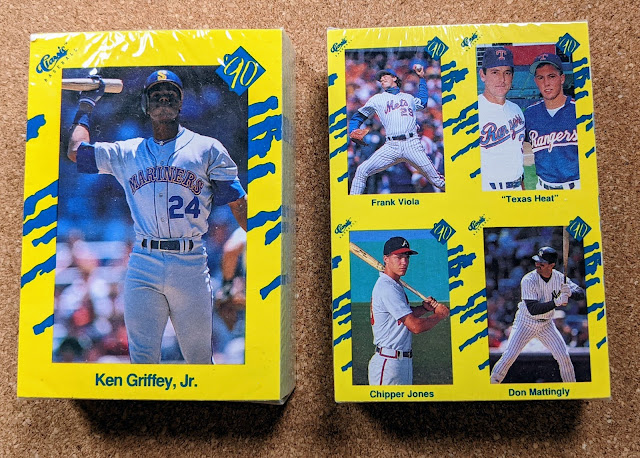 1991 Fleer might be the best known too-much-yellow baseball card set from the junk wax era, but 1990 Classic beat them to the punch. The side dashes also predate 1991 Donruss, though I suppose both owe something to 1988 Fleer. I didn't take any pictures of the non-card stuff in this game box, but yeah, you get two sealed stacks of cards. 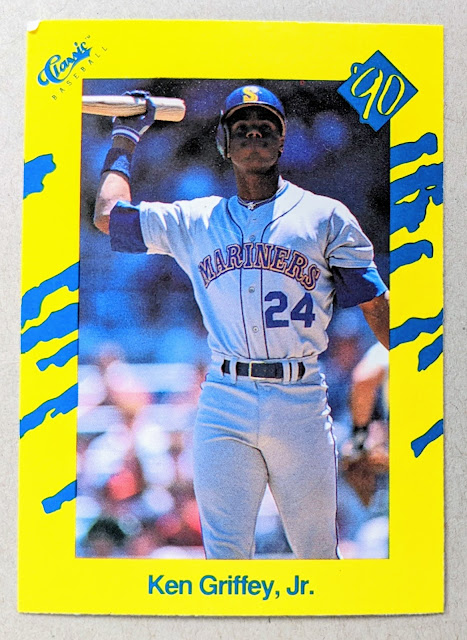 Residing on the top of a stack, Junior unfortunately had his upper left corner ravaged, and judging by the photo, he's not happy about it. That's another cool thing about Classic.. they'd occasionally use a semi "controversial" image that the major card manufactures at the time might shy away from. (Andre Dawson getting plunked comes to mind.) But yeah, other than that one dinged corner, the cards were all as mint as expected. 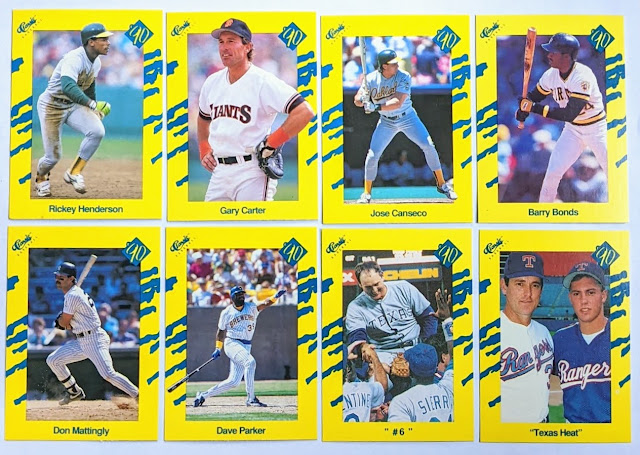 Some more highlights. I really like how Cobra's bat is synced up with the design's dashes. The teenager with Nolan on the "Texas Heat" card is his son, Reid. The Rangers actually did eventually draft him in 1994, fulfilling the prophecy of this card to some degree. He had a solid pro debut, putting up a 2.90 ERA in 83.2 low-A innings that year, but struggled the following season and soon became an executive who's worked with the Rangers and Astros.
Doing some research to wrap my head around the wild west overproduction era.. It gets a little confusing with all the sets that Classic put out around this time, but as far as using this general '90 design, here's what's out there:
1990 Classic Blue (Total Cards: 150) - Being the largest, I suppose the blue one is their "flagship" set?
1990 Classic Yellow (Total Cards: 100) - like their "Series 2"? Released later in the year.
1990 Classic Update [hot pink] (Total Cards: 50) - The year's "Travel Edition", I believe.
1990 Classic Draft Picks [grey marble] (Total Cards: 25) - I bought this little clamshell-cased set as a kid (via mail order?) and think I might still have it somewhere.
I guess maybe someday I'd like to pick up the blue and hot pink versions to round things out for me, but then again, I'm not in it for the complete sets; I'm cherry-picking out PC guys I need and the rest of the cards are up for trade. (Anybody need any yellow '90 Classic commons?) 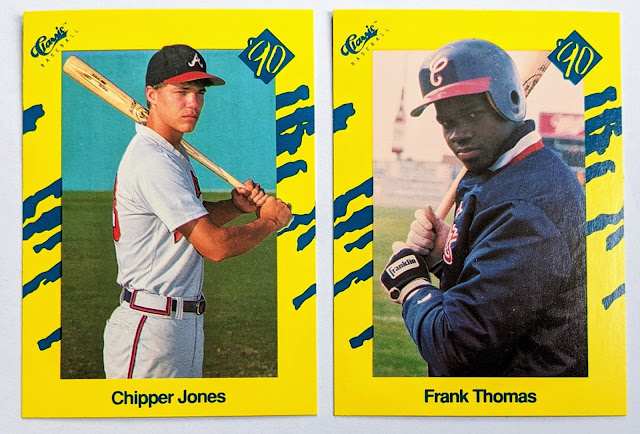 No doubt these are the "big money" cards in the set.. the ones that you probably wouldn't feel right leaving behind in a dimebox. Frank Thomas already had his draft pick cards cluttering Beckett's Hot List at the time, but Chipper Jones didn't get mainstream cards till 1991, so Classic really got the scoop here, featuring the future HOFer on a couple cards in both this yellow set and the 25-card draft pick set they put out.

I've also got a box of 1989 Classic to bust n' blog 'bout.. but now I think we'll save that one for another post. Next time I'll also show some of the game stuff for those interested. See ya then.