I threw a few cards in the sun at the beginning of the year as part of my research on fading experiments. The best result was the '91 Fleer that's since made the rounds. But here's another mod that also turned out pretty cool: 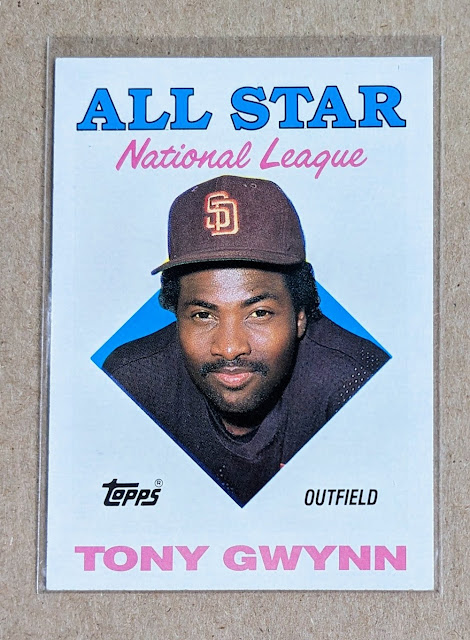 The design opens up without the blast of yellow behind the diamond hole.

No surprise, but yellow turns out to be the easiest color to bleach away in the sun. So yellow-forward cards like '91 Fleer and the '88 Topps All-Star subset take to modifying the best. 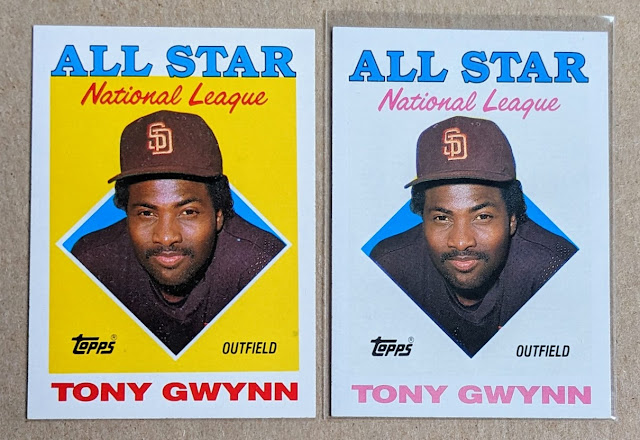 Here's a side-by-side. This is the only one I've made so far, but would like to whip up some more this summer. (Anybody got dupes they could send me, especially Mattingly, Puckett, Ozzie?) Next time I'd probably mask the player name too so it remains a deep red rather than turn pink (though "National League" is awash in yellow, so can't do much with that).
Gwynn's 1988 Topps All-Star card has some extra significance for me, to boot. I picked it as my first wallet card, and it got its "moment in the sun", so to speak, when the whole wallet card idea then made the rounds online and was a brief sensation.
Now let's segue into a wallet card post... 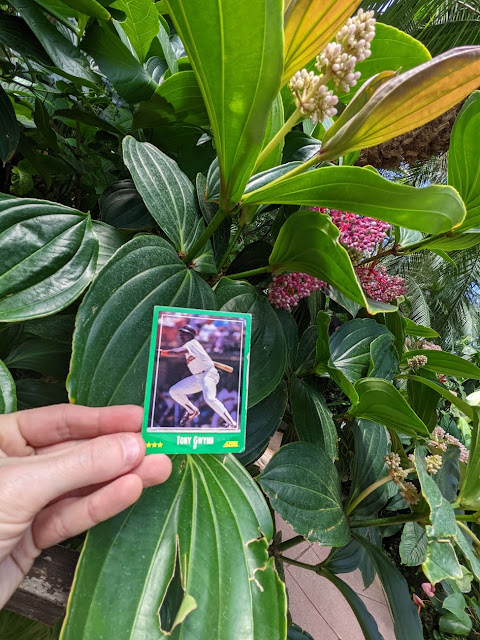 My 2022 wallet card was a 1988 Score Gwynn. Here it is getting chummy with fancy plants at the Lincoln Park Conservatory in Chicago when I was there this past summer. 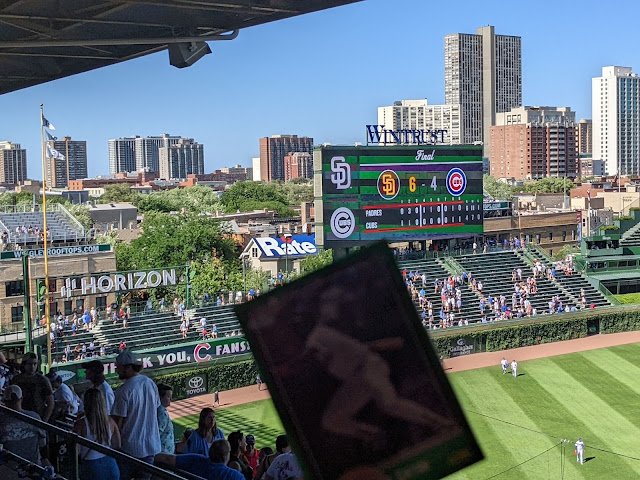 If my wallet card could talk, I think it would say the highlight of its year was taking in a Padres victory at Wrigley. 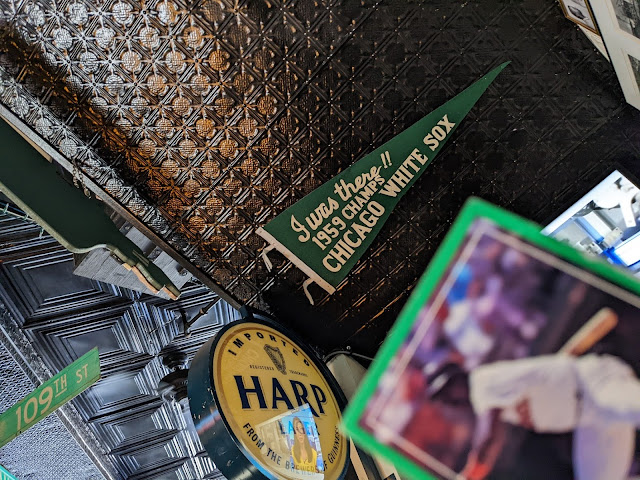 Another random wallet card photo I didn't include in my big post recapping the Chicago trip. This picture kinda makes me dizzy, lol. Paging M.C. Escher! 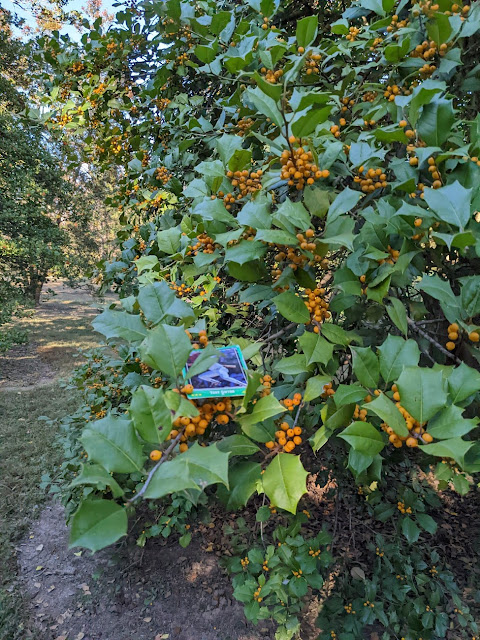 My only other time out of the greater Portland area in 2022 was a trip to Kentucky for a cousin's wedding in October. The only time I remembered to snap a wallet card photo was during a little family hike one afternoon. 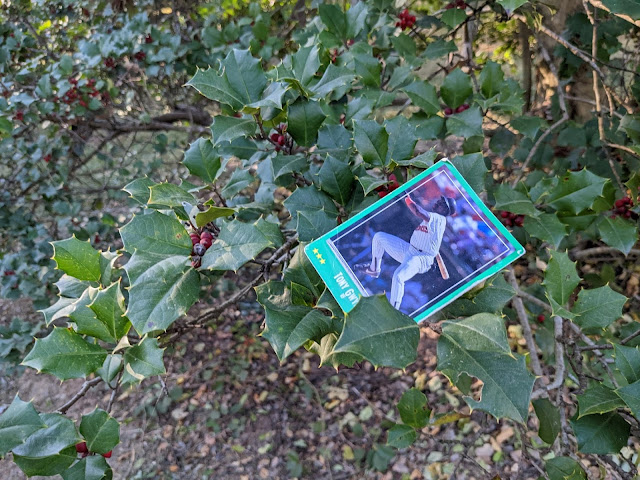 Yep, there's Tony in the crisp Kentucky autumn air.
Will my 2023 wallet card see more action than a ballgame and some shrubbery? I'm not sure. No travel plans locked in, but we might do something in a few months. 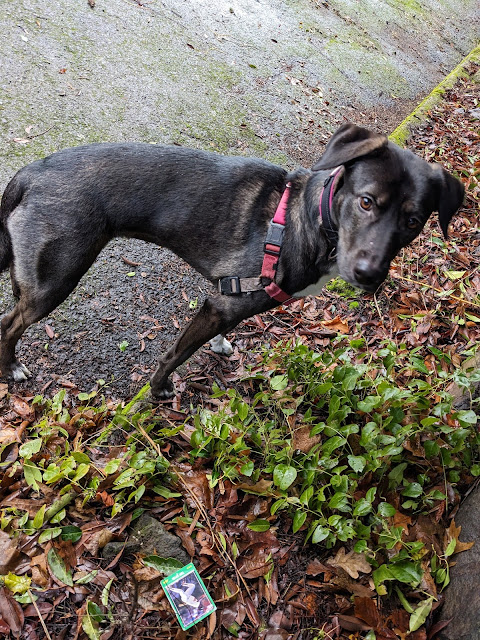 One last out-and-about photo of '88 Score Tony communing with nature, taken 12/31/2022, to close out the year. Nothing really interesting going on here, just a wallet card photo for the sake of taking a wallet card photo.. snapped while walking the dog. Ruby stank of pee most of this week-- Lord, this pup!-- but got a bath the day before and is still pretty clean and pettable today.
Ooh, this part is fun... 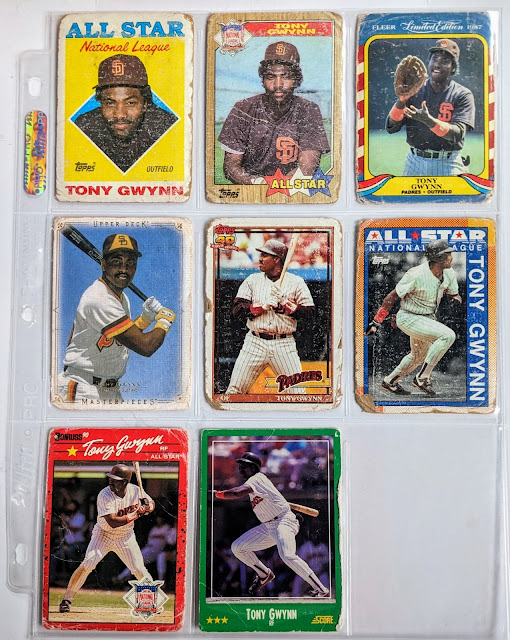 With 2022 retired to the binder page, that wraps up 8 years of wallet cards. A year from now, the page will be complete. Then I'll have to decide whether I want to start a new page (if so, stick with Gwynn or pick another favorite player of mine?), or pick a "permanent" wallet card to leave in year after year, or heck even just stop putting a baseball card in my wallet in 2024. We'll see how it shakes out. 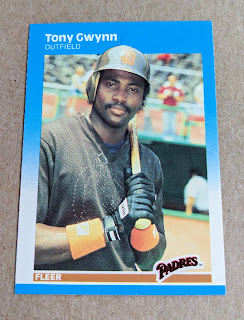 I picked 1987 Fleer for 2023. Technically '87 Fleer makes an unprecedented return to the wallet, seeing as 2017's card was from the 1987 Fleer Limited Edition Baseball Superstars box set. But yeah, as mentioned earlier this year when I pulled the trigger on a complete set, I remember 1987 Fleer being a big deal when I first went nuts for baseball in 1990, with the Bo Jackson and Will Clark being prestige pieces to show off to your buddies at school if you were blessed to own either. So part of me winces at putting an '87 Fleer card unprotected in my wallet. But thanks to Padrographs Rod bestowing his vast fields of Gwynn dupes on me over the years, I've got over a dozen copies of this card so it doesn't hurt too bad sacrificing one of them. It's a nice shot featuring Mr. Padre giving a subtle smile with his mind on pre-game BP. That sky blue should look nice closing out the binder page.

Thanks for reading another year of Baseball Card Breakdown. I appreciate it. Happy New Year! Any of you swapping in a new wallet card this year?