Spring of 1990 was when I first got swept up in baseball cards. It's funny looking back now, but 1987 Fleer was treated as a highly respected set by us young'uns, in particular the Bo Jackson and Will Clark rookie cards that may as well have been Honus Wagner. The set just felt special somehow, maybe because it was sort of limited in its print run compared to the near-infinite supply of 1987 Topps and other overproduced sets of the era.

I still have the Devon White/Willie Frasier dual prospects card I had as a kid and love it though it's not worth much these days. And I briefly owned the '87 Fleer Will Clark as a young collector before another kid at school talked me into a trade. I don't recall the details, though I've always been a sucker for vintage, so it was probably a trade offer with some 70s stuff.

Anyways, after returning to the hobby as an adult, I ended up with a couple "starter lots" of '87 Fleer, good for about half the set, and I had been waiting around hoping for another big lot or two to fall into my lap before I sorted it all out and made a wantlist. But now the years have passed, postage rates have raised, and spurred on by a Night Owl post on the subject of giving in and buying a set you had attempted to build, I gave up on my half-amassed setbuild and started keeping an eye on eBay for a cheap complete set. Took me about a month of patience, but eventually scored a factory set for just under $17 out the door, most of that going towards shipping, no surprise.

I've got burned a couple times by "complete sets" on eBay not being complete or having widespread damage, so checking for completeness is a must. Looks like the set I bought had never been thumbed through, as it was still tight in alternating chunks and all out of order other than all the team stickers being at the front. You know what that means.. sorting time! 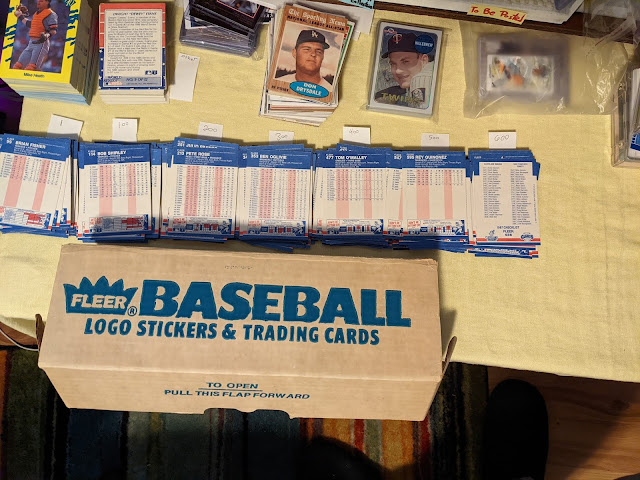 I've been meaning to write a post about my cardroom sorting set-up since shortly after moving in 2020-- I was really pleased with it when I first came up with the layout for the new house, though my enthusiasm wasn't enough to get around to blogging about it. I'm due for a big sort, and once I get the area cleaned up I'll try to cover that stuff a little more in depth for the couple of readers who might be mildly interested. 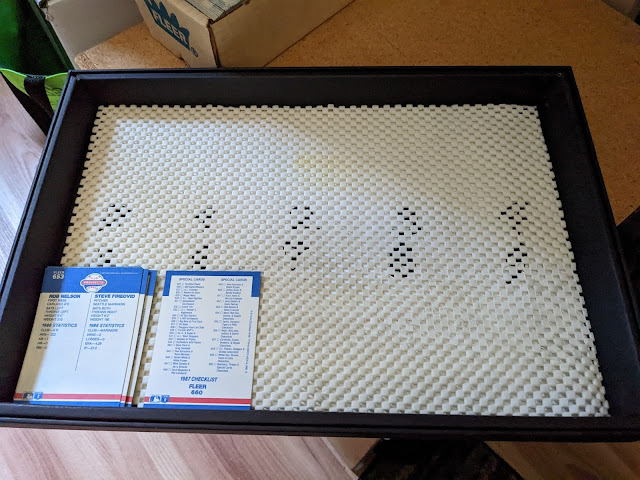 I didn't think of taking a picture of phase 2 of sorting until I was 99% finished, but this is a little sorting tray I put together with an old box and some anti-slip material. Works ok and lets me sort on my lap while watching TV or whatever, though the design is still a work in progress.
But yeah, sorting went well and every card was accounted for-- There were a few brief "uh oh, missing a card" moments, though they all turned out to be sorting mistakes on my end. Each logo sticker in the box was represented at least twice, with one having 3 examples included. 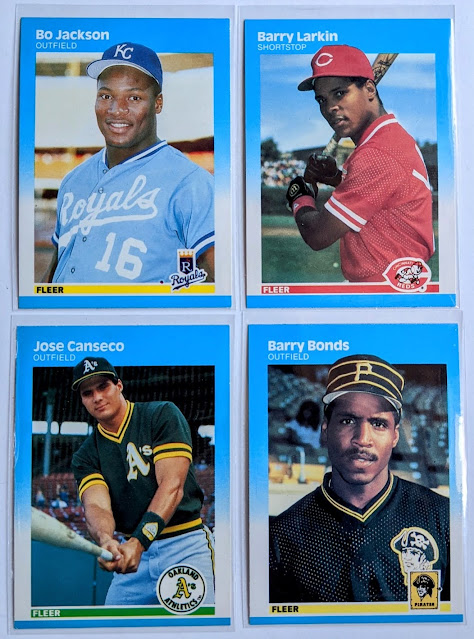 Trying to keep this quick and so I'm not gonna examine the set too closely in this post, but here are a few notable cards. A little bummed the Bonds RC isn't better centered (same with Will Clark, not pictured), and I could do without the printing flaw near the Bo's team logo, but overall I was happy with the condition of the cards, all as sharp and pack-fresh as you'd hope. 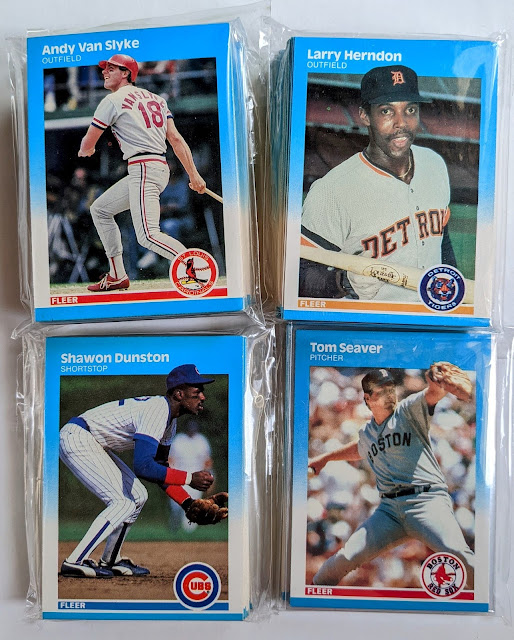 The "half set" (~300 cards) I previously had is now trade bait I'd love to thin out, so if any of you are working on completing 1987 Fleer, feel free to send me a list of your needs. Or maybe we could deal for the whole lot if anyone is looking to make bulk progress with the set.
As far as my Fleer collection, I'd eventually like to complete a run from 1981 into the early 90s. I was most interested by '84 Fleer, and finished that set off a few years ago. I also got hooked up with complete sets in trade of 1986, 1990, 1991, and 1992. And I was given a partial set of 1988 Fleer and honestly in hindsight I may have been better off just buying another complete one, but I've been trying to fill the holes through trade throw-ins and it's dragged on longer than I was anticipating. But yeah, as I work on that run of flagship Fleer, it feels good to have 1987 complete now, especially in light of how the set was such a big deal back when I first entered the hobby.

Email ThisBlogThis!Share to TwitterShare to FacebookShare to Pinterest
Labels: Joy of a Completed Set