Late Saturday night I was taking a quick peruse of Listia, and a recommend auction on the right sidebar caught my eye: "baseball cards with binder". It was ending soon and had an opening bid of just 75 credits (which in dollar terms is like less than a quarter; hardly anything). The catch was it was Local Pick-Up Only. But in a "small world" circumstance, the location was my home of Portland, OR. So I bid, and ended up the only bidder, winning it for the 75 credits.

The guy was new to Listia and didn't have any feedback yet. I knew it was a risk, since newbies often flake out, but Listia is good about refunding credits in such situations (and again, it was only 75 credits), so I figured it was worth the risk. (I've been burned on Listia a few times before but always got my credits refunded eventually, and once I got a Rickey Henderson rookie off a newbie for 2000 credits; so yeah, it pays to take a chance.) The guy didn't type out any cards, just a couple pics of the binder's outside, and one shot of it open (not quite clear enough to identify the cards, but enough to tell junk wax and later.) He claimed to have spent about $50 on collecting it, but was giving it up.

After my recent great experience doing an eBay local pickup, I figured a Listia pickup would be cool too. And guess what?,,,, yeah, it was fine (though no free hot sauce this time, sorry to say). And I had to drive out almost 7 miles to the place he wanted to meet up, but that wasn't too bad for a hot Sunday afternoon without really anything else going on. He got there just moments before I did, so I didn't have to wait around at all. He was a kid, literally like middle school age, but seemed nice enough. His age takes some wind out of my "I got a great deal!" sails, because nobody wants to rip off a decent kid, but I doubt there's anything really valuable here, so no need for me to be guilt-ridden over it at all.

So anyways, let's break into this binder and see if there's anything cool in here!

Page 1
Round up: The only guy I've heard of here is Jeff Ballard (yeah, I love baseball cards, but haven't followed baseball very closely for the past few years; I'm more into the "good ol' days"). Well, I think I've heard of Jason Marquis, too. Wow, that Eric Hurley card is thick! Probably the thickest non-relic card I own. Too bad he hasn't done much in the majors. Boof Bonser is a great name! But again, too bad he's not a very notable player.
Winner: Points for girth: Eric Hurley. Runner-up: Da' Boof.
Loser: Sorry, Mr. Ballard, '88 Donruss is always a loser unless maybe it's Roberto Alomar. 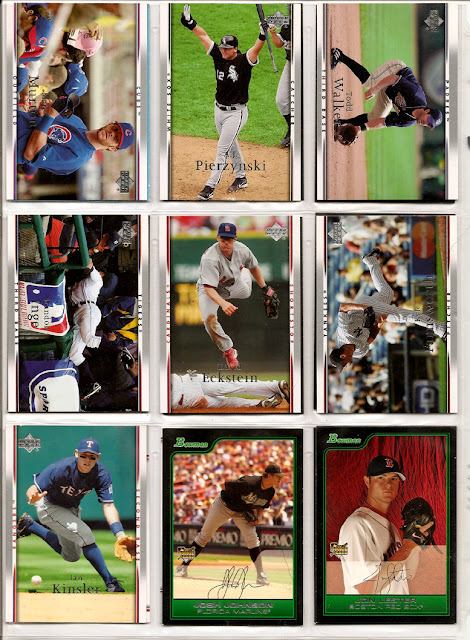 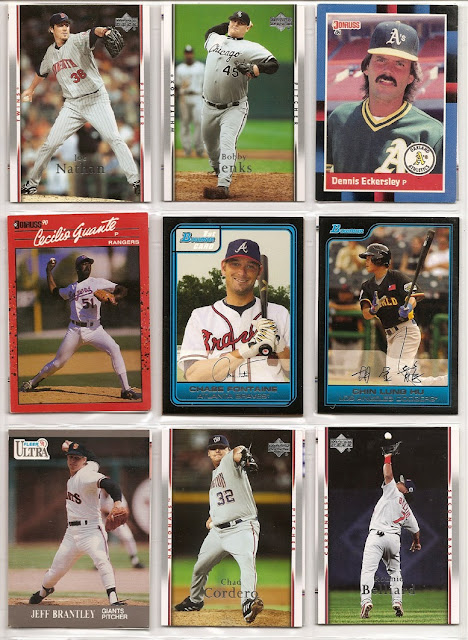 Page 3
Round up: Not much here. An Eck, but '88 Donruss again. Oh hey, hiding behind that Chase Fontaine in the middle was a gold parallel (another of those super thick ones) of the same card. Cool.
Winner: Chin-lung Hu.. nice looking card.
Loser: Jeff Brantley just edges out the 2 Donruss cards. 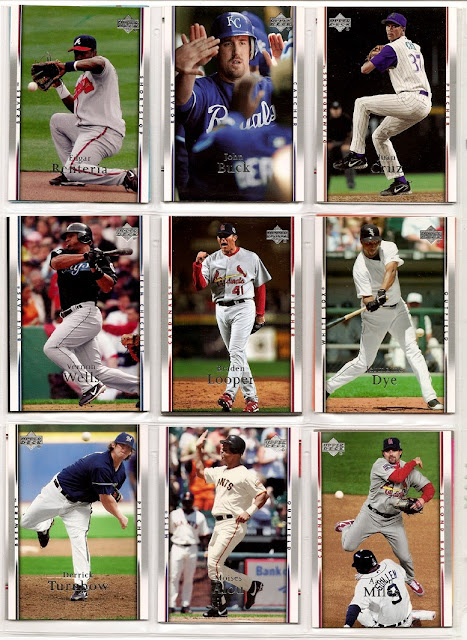 Page 4
Round up: An '07 Upper Deck lot. Not one of my favorite sets (the sides make it feel like each card is being squeezed in a vice).
Winner: Moises Alou.. a player I always kinda liked.
Loser: Derrick Turnbow.. why you got dat hat down so far, bro? 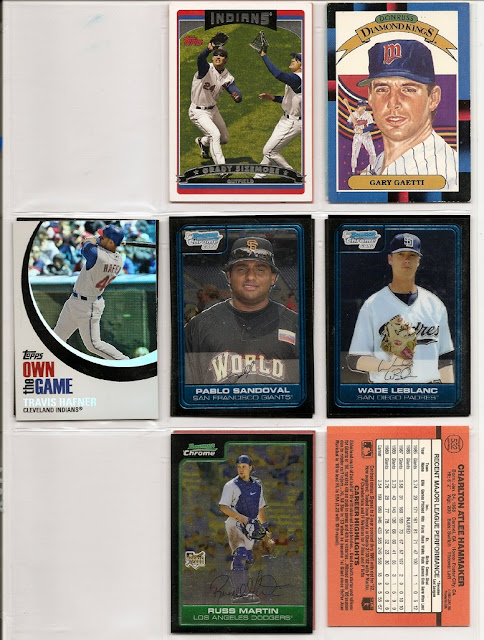 Page 5
Round up: Just a partially-full page here, but a good one. That's reigning WS MVP Pablo Sandoval in the middle there.. RC, cool (At least, I think so.. "1st Bowman Card" = "Rookie Card", right?). Also a Russell Martin RC (but not "1st Bowman Card"?? So complicated!).. he was good for a while. I remember hating him for getting lots of key hits against the Padres whilst he was a Dodger.
Winner: Kung Fu Panda
Loser: Gaetti DK 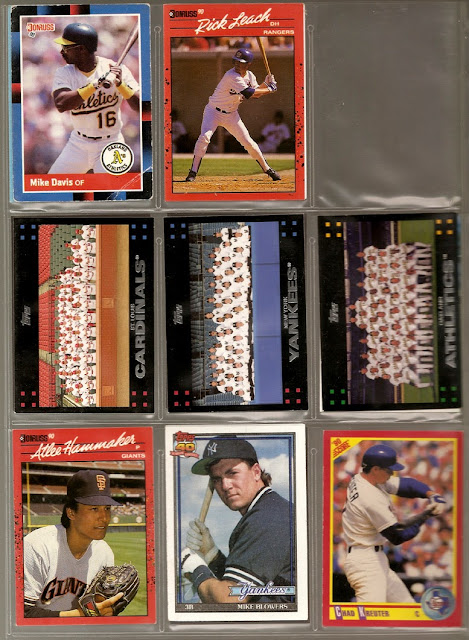 Page 6
Round up: Some junk and 3 team cards from 2007.
Winner: Hmm.. the '07 Cardinals were the reigning WS Champs, so I'll give it to them.
Loser: Creased Mike Davis has a date with the trash can. Sorry, Mr. Davis.

Ok, we're just a quarter-way through the binder, but I think that's enough for today's post. Check back soon for the continuation to see what other mysteries will be revealed.

What do you think of the lot so far? Any hidden treasures that I should screw down in a hard case ASAP? Not gonna blow anybody away, but I think it was worth the tiny few Listia credits and the time/gas to pick it up, with the Pablo Sandoval RC being the top card so far. I should mention pretty much all of these cards are open for trades, so if anything is catching your eye, check out my wants.
Posted by defgav at 7:50 AM