Dang it, guys.. I did it again! I accidentally went out of order with this set. I jumped to #8 Michael Jordan in the previous installment, skipping over #7 Bo Jackson. Wasn't on purpose, but I guess I was swept up in The Last Dance hype, lol. I suppose card number doesn't really matter much unless you're working on the set, or maybe a frankenset, or maybe you're one of the very few collectors who collect certain numbers, like the No. 5 Collector guy and how Tom at Angels In Order likes cards that are #444. But for most of us, card number is rarely something we worry much about. But I still feel like a bad set-blogger for the taboo faux pas of going out of order. I have not yet made such a mistake on my 1991 MusiCards blog, thankfully. 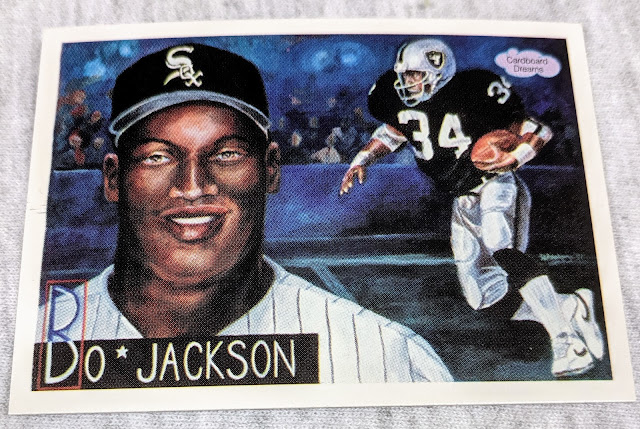 Not the best likeness of Bo, but overall a neat two-sport card. Funny how I was just talking in my latest post (editor's note: the first part of this post was drafted a while back; I've posted a few times since) about the White Sox rehauling their uniforms several times over the years until finally finding a fit with colors most equated in sports to the NFL Raiders. This card shows both for ya. I never thought about it, but it sure is funny that 1991, the year they switched to those uniforms, was the year they signed Bo after he had recently retired from football. Having a former Raiders hero on the squad really must've helped embolden and validate their gutsy uniform decision. I don't know about you guys, but at my middle school around '91-92, the new black White Sox stuff was considered the coolest. Probably also because popular rappers wore it sometimes. I never had a Sox hat (which still fills me with a gentle wave of regret to this day), though I did have a black White Sox shirt back then which I wore when I needed to impress the ladies. Worked every time. Nah, I'm just kidding. But I thought I looked cool, at least. I think I've even posted an awkward-age photo of me wearing it in an older post but I don't think I'll dig it out this time. 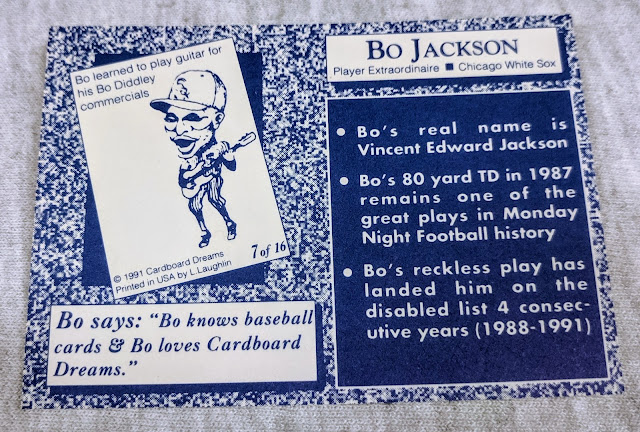 Some nightmare fuel on the back with a demonic clown playing guitar. Yikes! But seriously, I wonder if Bo kept up practicing guitar? Talented guy like that could do damn near anything he set his mind to, so I bet he could learn to really shred if he worked at it.

Anyways, now time for the randomness. 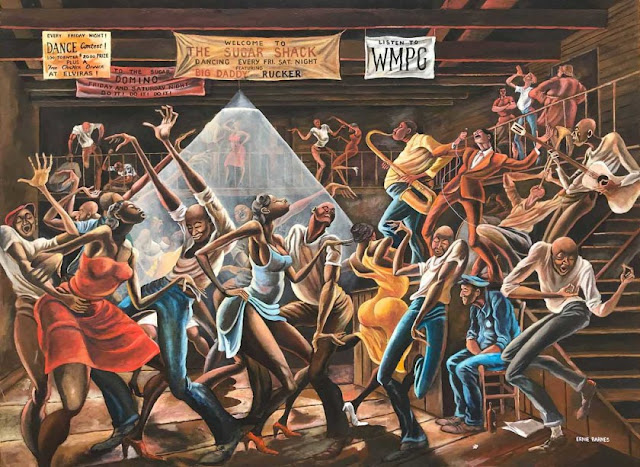 Isn't this a cool painting? Looks like a fun night at the Sugar Shack. 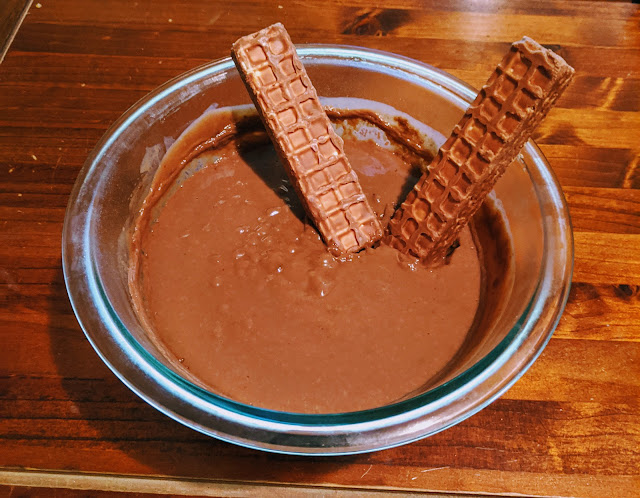 Speaking of sugar, I'm a dessert guy. I've got a sweet tooth and the curiosity to hunt for new dessert ideas to blow my mind. One I found that I will highly recommend is eating chocolate pudding not with a spoon but with nutty buddies. Oh man, that's heaven! 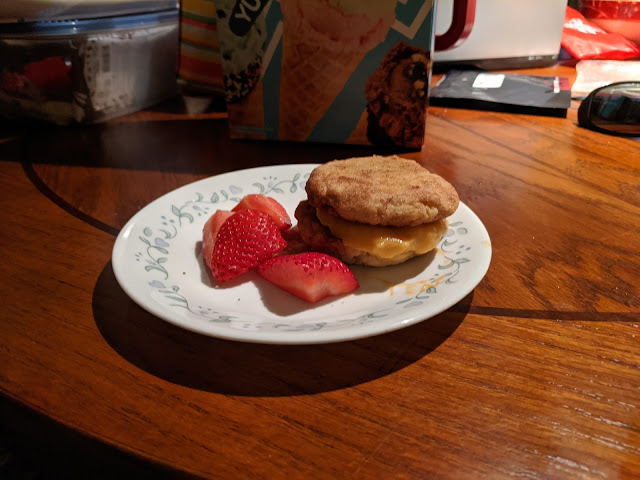 Another good one: sandwich of butterscotch pudding between a couple snickerdoodles, with fresh strawberries on the side. Very nice! 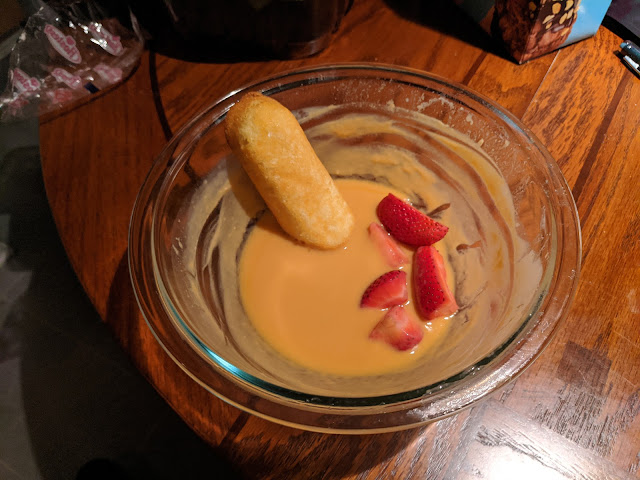 What the hell is this? I think it's a Twinkie dipped in the last of the butterscotch pudding with some strawberries thrown in for good measure. Yeah, this was fine. But let's be honest, these 3 desserts I've shown here are in descending order and this was the least best. 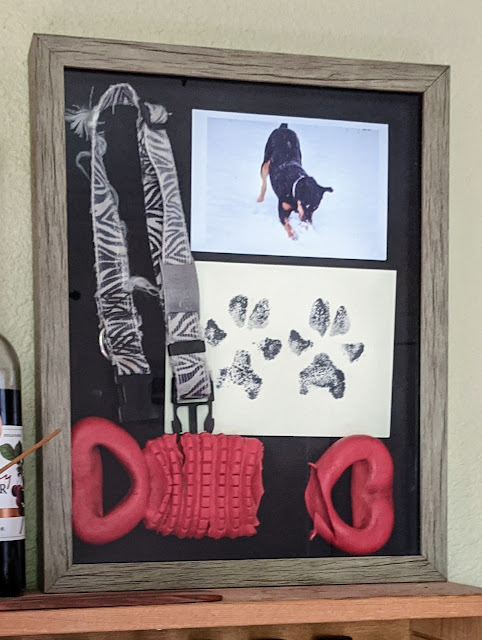 Shadow box tribute to my amazing pup Annie Lou who left us last year. Features a dual auto and some game-used memorabilia (collar and her favorite toy). Turned out pretty well. 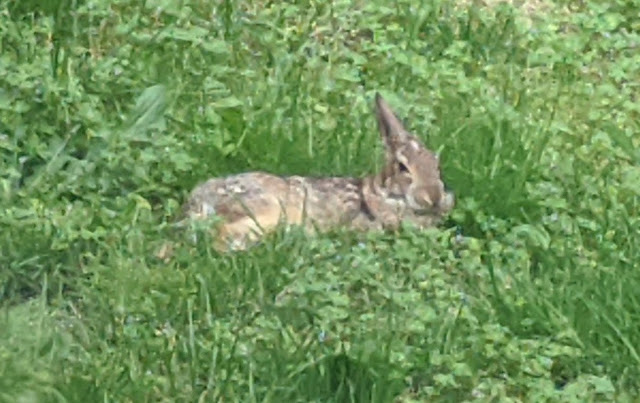 The wild bunnies who've been enjoying free reign of our backyard in the months since Annie's passing have been a godsend to us, providing the cuteness needed to help keep our hearts from turning to dust given the events of 2020. But the backyard has a new ruler on the horizon, with Dog #3 less than a week away from joining our household. Pretty excited about it. Stay tuned. 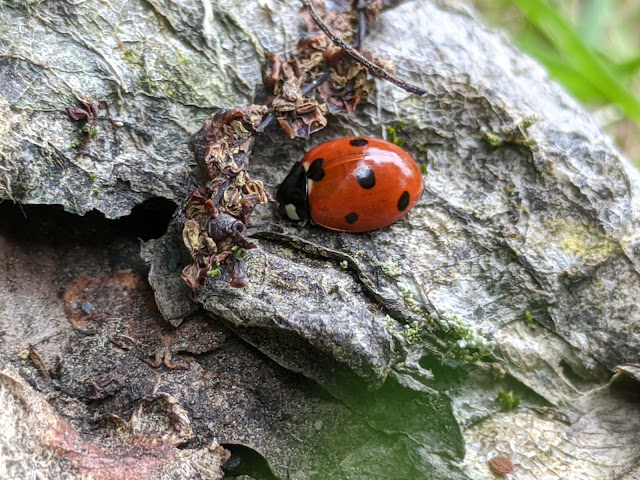 Ladybugs are cool too. Snapped this nice close-up a week or so back. 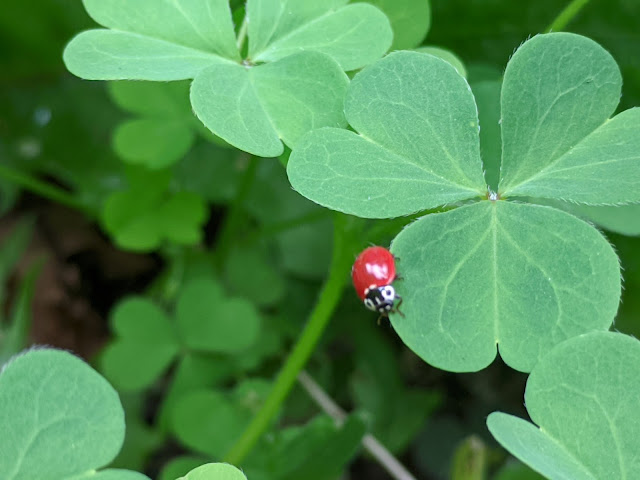 This baby ladybug was found inside on the wall of my wife's home office, but I successfully rehomed it to the overgrown garden. Seemed to be pretty happy to have leaves to crawl around on instead of a boring wall. No luck on the TTM request I sent to Mark McGwire a couple springs ago, but here's a version of it with a facsimile auto. Maybe someday! 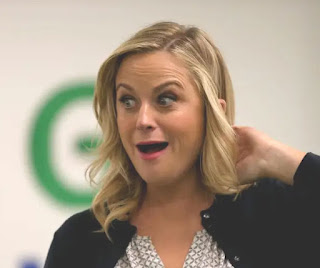 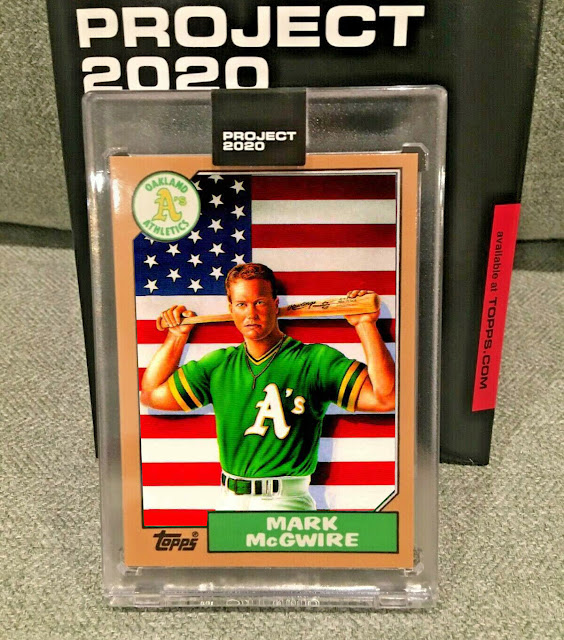 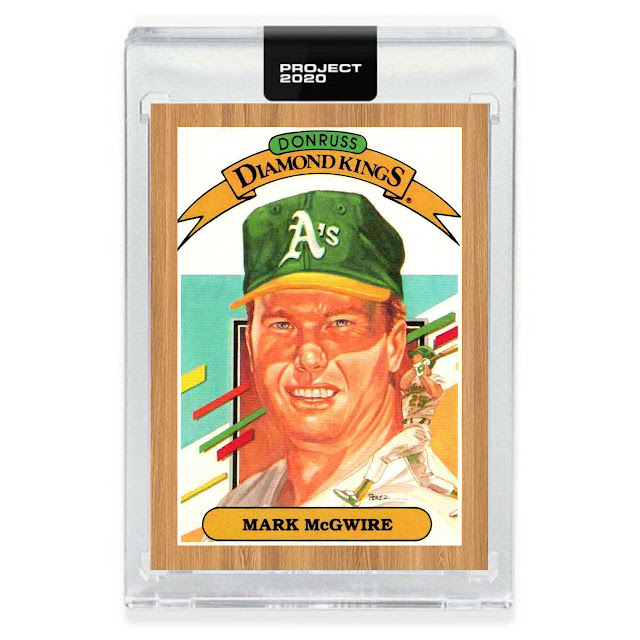 I thought this was a fun one! Would love to see Topps and Panini (or Upper Deck) come together to offer a special card or set of cards along these lines with proceeds going to charity... covid, BLM, or something. But that's just me pie-in-the-skying over here on my computer relaxing at the end of a stressful Q2 at work.

And here's a dumb gif I made of Bert Blyleven's 1975 Topps card. LOL 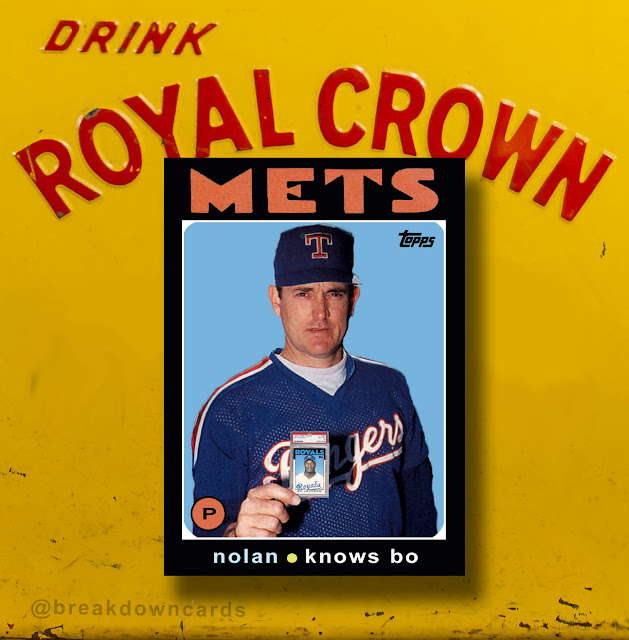 Can't remember if I shared this here yet or not, but here's another dumb thing I made for Twitter recently.. brings us back to Bo, tying up the post nicely. It's a 3-way mashup of cards: 1971 Topps Nolan Ryan, 1986 Topps Traded Bo Jackson, and 1990 Classic "Nolan Knows Bo".. all in one crazy image.

That's it for this ignorable shitpost. See ya next time!
Posted by defgav at 11:51 PM