Ok, I took a little break from blogging while I moved, but I think I'm ready to get back at it. I'm loving the new house. The final couple days at the old house and the first couple days at the new house were extremely stressful and exhausting. It was overwhelming and I felt like I was on the verge of a nervous breakdown for a while there, ain't gonna lie. Just so much crap to move and find a new place for. But then I turned the corner and have been good since. But it's been an ongoing process and we're still working on bringing over daily carloads of stuff from the old place, taking it right up to the last day of the month.

And things are still shaking out into their new places, with lots of boxes left to unpack and things to find. I've got my drum set up, but haven't found the sticks yet. And I had intended to post about a new collecting project of mine I'm excited about (a vintage frankenset), but well, I can't find the thing at the moment, so it'll have to wait.

Instead, here's a post showing off the first new incoming cards of the new house. 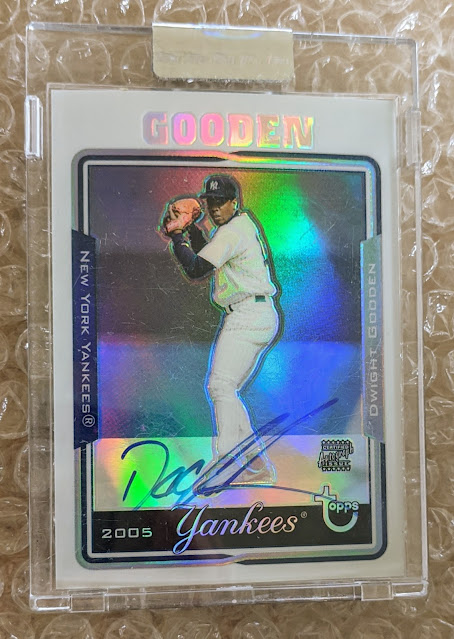 I feel like this one was a gift from the cardboard gods. Adding to my stress levels when we moved in was the fact that there was a problem with the internet. On one hand it was kinda nice being "off the grid" for a few days (no politics to read about, for one thing), but my wife and I need to be able to get online for work, so not having internet was a big problem.

But then the cable guy worked on it for an hour or two and got it going. When I went to test the connection, I clicked on my most-often clicked link: the bookmark to a Topps Retired eBay search that I typically check several times per day. And wouldn't you know it, the top new listing that met my eyes was this beautiful 2005 Retired Dwight Gooden refractor auto for a very decent price. Again, I check that bookmark a lot, and it's pretty rare that a refractor I need pops up.. like less than 1% of the times I click the link is there a card I want... but when there is, I'm a very happy man and if the price is right, I'll jump. So to stumble upon this card in my very first moment online in the new house seemed like a good omen and was a real "rainbow after the storm" moment for me. I hopped on that Doc Gooden buy-it-now so quick that I didn't even have a chance to update my address with eBay, so it ended up going to the old house. And although of course I set up mail forwarding, the USPS dropped the ball and delivered to the old address. But as I say, I've been popping over there daily picking up crap and cleaning up, so it wasn't a big deal.

By the way, around the time this post is published, I'll send out the bulk email to my trader buds with the new address. So if we've exchanged cards sometime in the past couple years or so, check your inbox for that, and please reach out to me if you didn't get the email but want my new address. 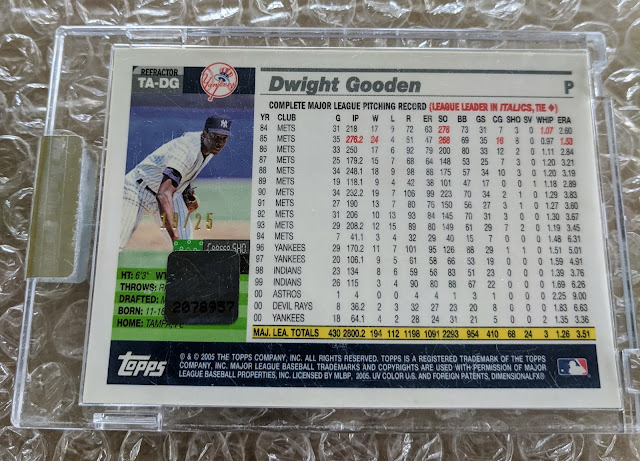 I've already got a couple Gooden autos featuring him with the Mets, so I don't mind this Yankees card, even if it's not his "heritage" team or whatever. He pitched a no-hitter for the Yankees in '96, but it was one of the few highlights after his heyday with the Mets. (As you can see from the stats, it was his final shutout and/or complete game.)
- - ---o
Anyways, later in that same day, I again clicked my eBay Topps Retired search bookmark and was again excited to see a card I'd been after. 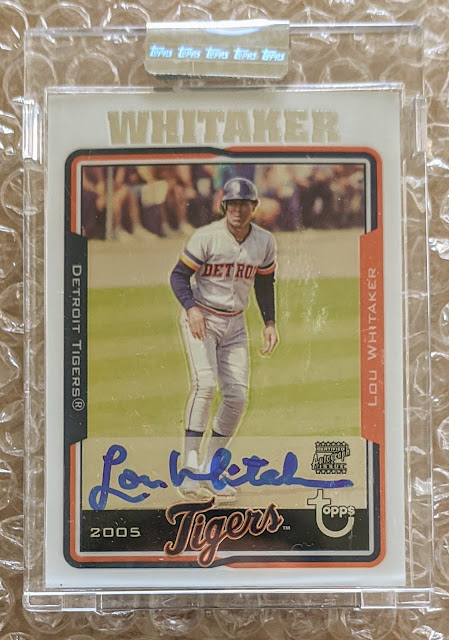 I've been wanting this Lou Whitaker autograph for a long time. Ideally I'll get a refractor parallel someday (still kicking myself over the one I just missed a few months ago), but I jumped at this base auto listed with a reasonable buy-it-now price. I had updated my address with eBay by this point in the day, so while it was the 2nd card I bought in the new house, it has the distinction of being the 1st card to be received at the new location. 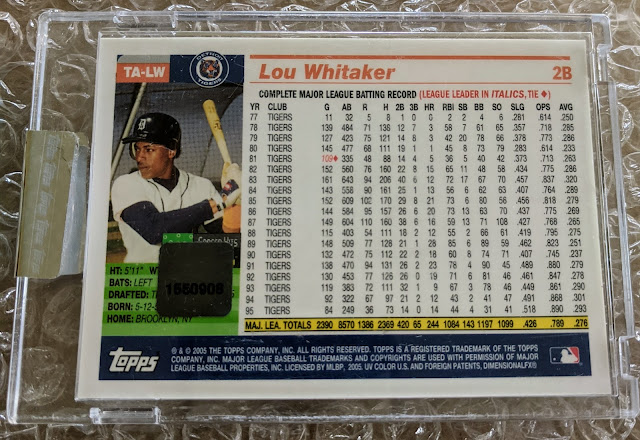 Lou Whitaker is next eligible for the Hall of Fame via the Modern Baseball Era Committee in 2023. I'll be rooting for him.
As regular readers know, I'm a bit obsessed with Topps Retired and it's rare that I score 2 needs in one day (or even in one week). Definitely a nice pick-me-up when I really needed it!
- - - --o 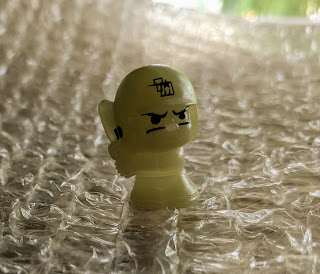 I also pulled the trigger on this glow-in-the-dark Teenymate. It's my first one of these things. I was expecting it to be a little bigger. It's just about an inch tall. 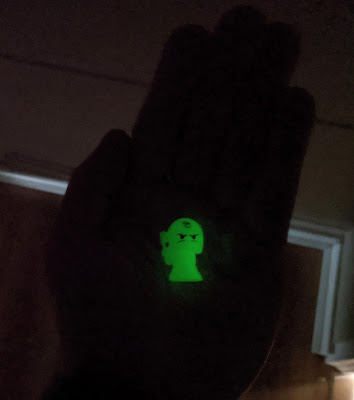 Here it is glowing in the palm of my hand. You might remember me talking about my "glow-in-the-dark shelf" at the old house? Well, I've got big plans for the new house. There's a seldom-used bathroom in the basement, and my wife has given me approval to make that into a glow-in-the-dark (bath)room. So I'm excited about that, and I'm sure I'll be posting updates on the blog, regardless if you guys care, lol. But the stuff from the glow-in-the-dark shelf is still hiding in a box somewhere, so I haven't been able to deck out the bathroom yet. But yeah, I'm excited to get that all set up and add more glowing stuff to it.
- - ----o 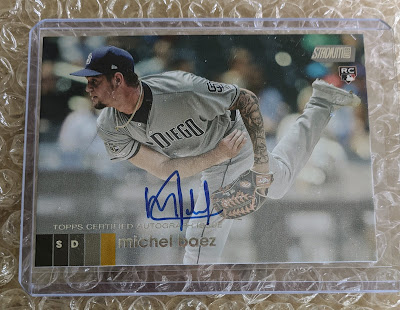 Here's a random-act-of-kardness sent my way by Dub Meñtality, a popular personality on card Twitter. He tweeted this Stadium Club auto up for grabs to a Padres fan. I was interested, but held off in case anyone wanted it more than me. But then a couple hours went by and somebody tagged me in a reply and no one else had spoken up, so I figured I'd call dibs. Dub's dibs did delight. Thanks, Dub!

After a promising debut in 2019, Michel Báez only pitched 4.2 innings for San Diego in 2020, but the Cuban righty still has potential and is one of the young arms the Padres will need to develop if they're going to make a championship run in the near future. 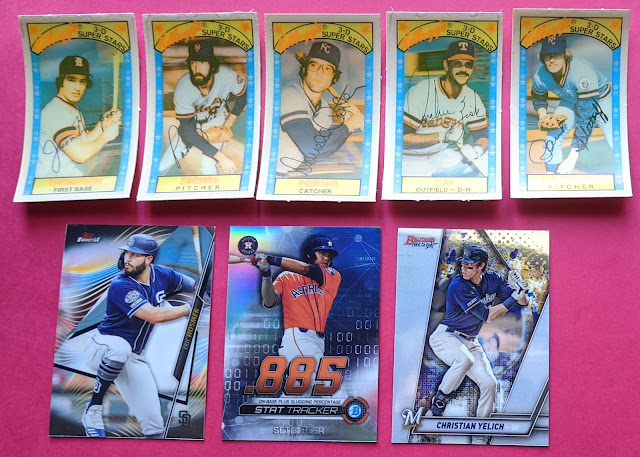 Wrapping things up with a PWE from earlier in the month that I didn't get around to showing off prior to the move. Reader David G. in San Diego has been finding cards to send me in return for random Cardinals I can scrape up for him. This time he surprised me with a few Kellogg's needs and some new stuff. And yes, they were again packaged with a cologne ad. Fragrant cards are his trademark!

Thanks, David! Your return was the last outgoing cards from the old house.. hope you liked.

One thing I noticed about 1979 Kellogg's is they have a tendency to get a washed-out effect to them like these 5 from David. I wonder why that is. It might happen in other years of Kellogg's 3D cards, but seems like '79s are especially vulnerable. 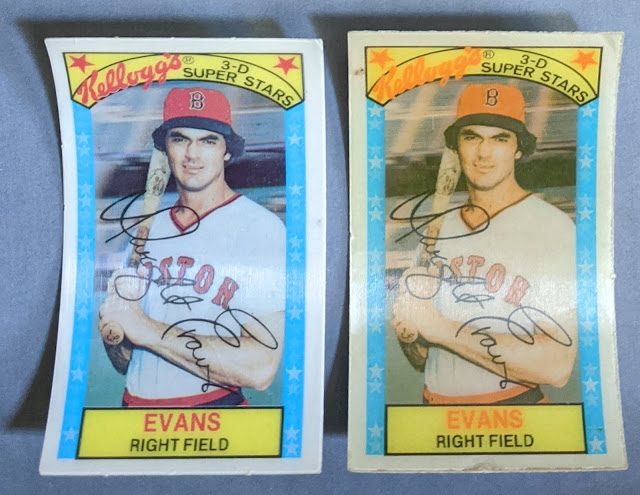 For comparison, here are a couple Dwight Evans in my collection... one with crisp coloring, and one that's succumb to the washed out effect. Not that I'm picky about condition of my Kellogg's cards, but just making an observation. I wonder if it's due to sunlight exposure?

Anyways, that's it for this post. Thanks for stopping by and have a great weekend!