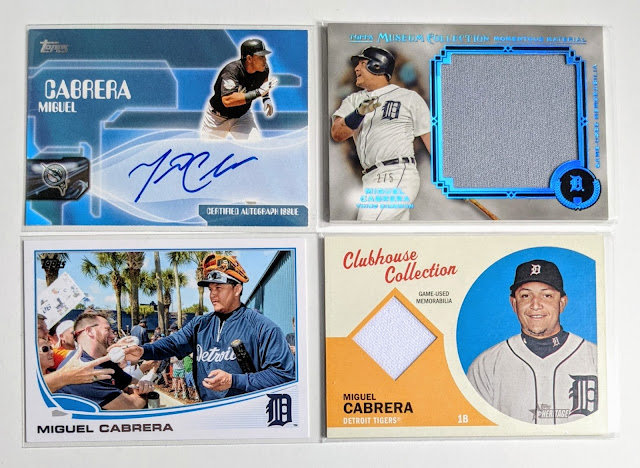 Miguel Cabrera is a guy I collect. Recently retired him into the Hundred Card Club section of my wantlist. Above are some highlights from the PC.
Congrats on entering the 500 HR Club, Miggy!
That jumbo relic really leaves something to be desired with that big, boring grey swatch. 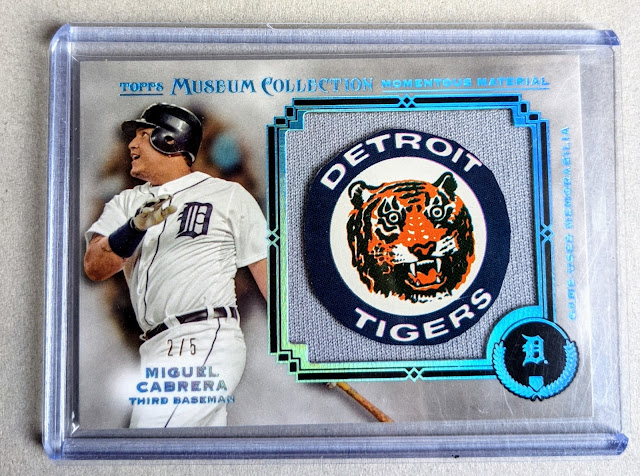 There we go! Blog-used sticker on the penny sleeve to kick it up. (I need to work on my cutting skills if I'm ever to be an elite card art creator.) (God help whoever ends up with my collection after I die, as there's plenty of weird stuff like this modified relic that'll surely result in some head-scratching.)
- - -o 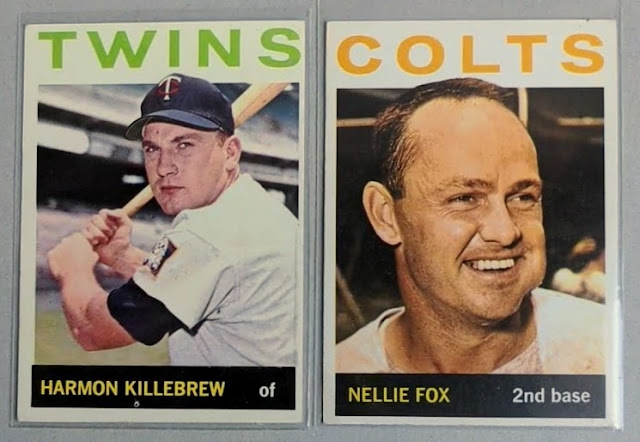 A couple weeks ago I was inspired to revive my 1964 Topps setbuild. I was like "YEAH, I'M 3/4 DONE; LET'S POUND THIS ONE OUT!" I did some research, finding the fair price for my needs. Found a bunch from Greg Morris on eBay (you might be familiar.. vintage cards with the blue backdrop). Put in several bids/snipes that were just a bit above the market rate but I figured the savings from combined shipping would offset the overpaying. But damn it, I guess everybody else had the same fucking idea, as all that guy's cards seemed to finished significantly above the market price.. and I lost every auction from that dude. Bummer. Oh well, at least I ended up with a pair of HOFers from other, non-Greg Morris sellers, sub-Lincoln shipped each. My '64 setbuild is back to the backburner. *sigh* I had put a bunch of commons in my Sportlots cart too, but think I'm gonna clear that and just circle back in a year or three. 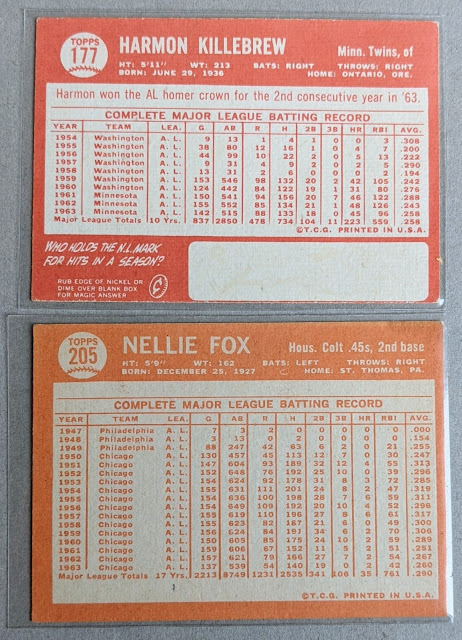 Harmon was in the thick of his career at the time, while 1964 would be Nellie's final full season. 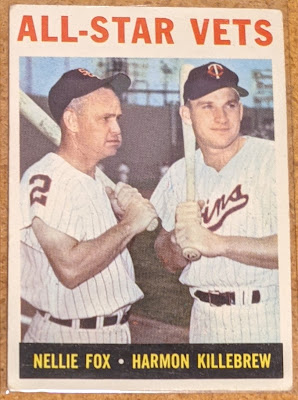 But those aren't the first of these bros in my '64 setbuild. Got this All-Star Special from Nick's dad 2 or 3 years back. I'm gonna start making customs again one of these days (technical difficulties nearly sorted out) and hopefully work out another deal with him soon.
- - -o 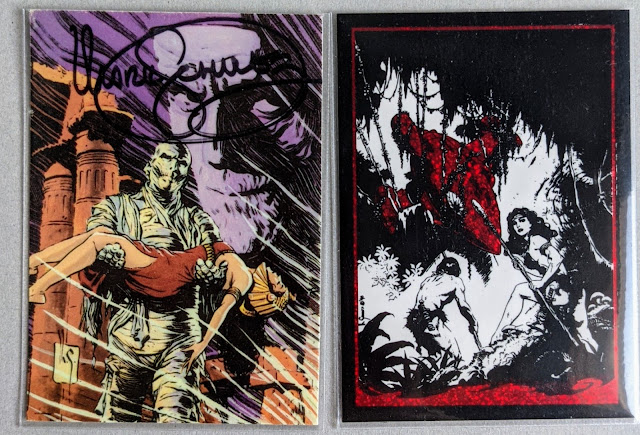 Here's a fun one. Some dude found an old tweet of mine where I said I had dupes from '88 Topps Pee-Wee's Playhouse for trade, and he needed one of the [tough] stickers (CL#4), and it just so happens I had a dupe (actually a triple; I'm working on a 2nd set) so I was able to hook him up and in return I got a couple promo cards. The guy I traded with happened to be a cousin of Mark Schultz, an artist who's worked on lots of stuff including Marvel and Star Wars cards. So he had the hook-up for signed promos. One is signed on the front, and the other on the back: 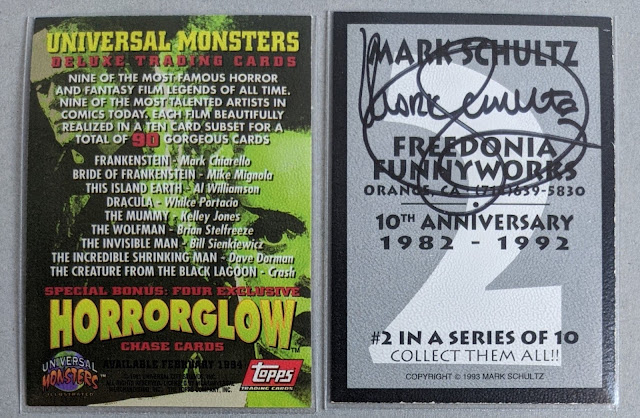 Both very cool, but what really makes card #1 a bullseye for my collection... 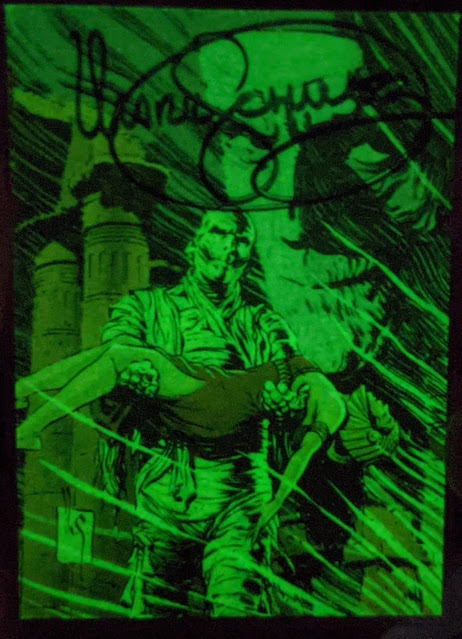 It glows in the dark!! I'm a sucker for glowing cards, and this is my first glowing autograph (I've been meaning to send an UD Fun Pack Glow Star TTM to Juan Gonzalez, but haven't gotten around to it yet). Glows great!
Thanks, Ned!
- - -o 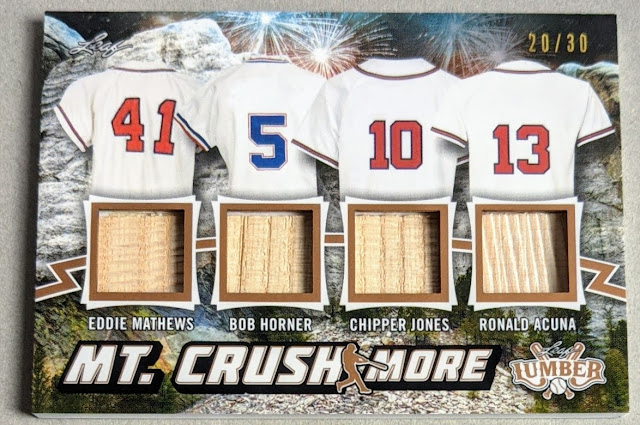 Good ol' Wes Moore must not be collecting Braves much anymore, because he was kind enough to send me this incredible quad relic of notable tomahawk choppers. I guess this'll go in my Acuña PC, no offense to the retired greats. 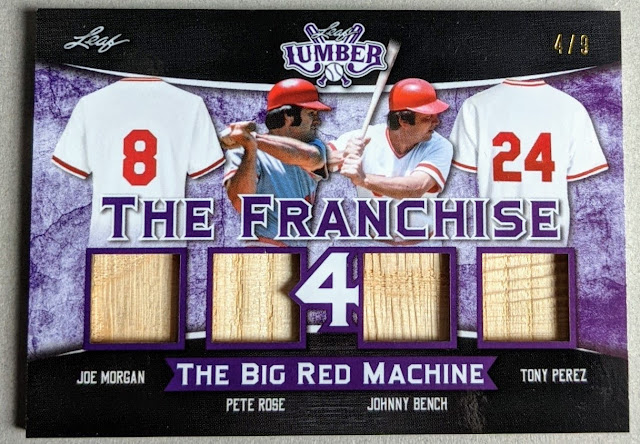 Another bat-tastic quad relic! Man, I'm not even sure which PC this'll go to. Rose, Bench, and Perez are PC guys while Morgan is a heavily-respected 9-pocketer. Leaning toward Bench here, honestly. Love that sack of shit Charlie Hustle, but I've got enough unlicensed cards of his. And Perez is great (and a former PCL Padre), but you just can't beat Bench as far as the Cincinnati Reds go. 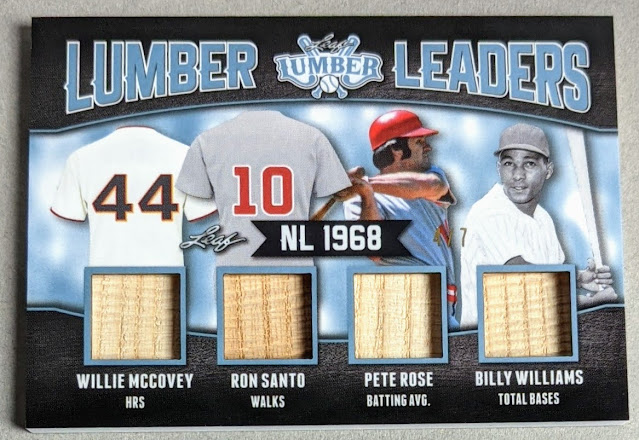 Another Rosey one! I helped out Wes with some wrestling customs (jpgs only.. still haven't printed any customs of my own since Wes' last batch about a year ago), with these cards being my commision. Relatively easy decision to put this one in the McCovey PC (though Billy Williams is awesome too, and no disrespect to Ron Santo). 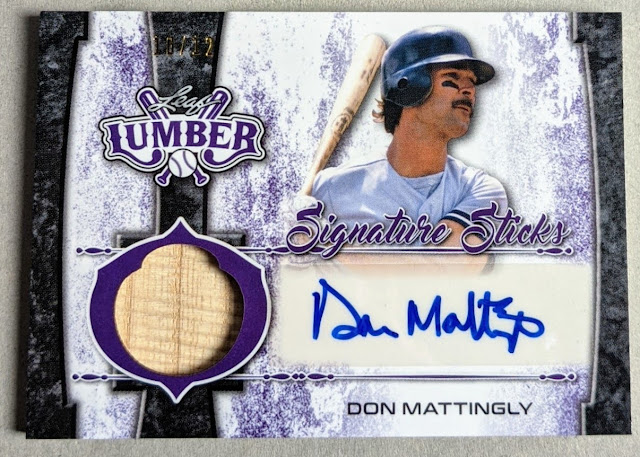 My Donnie Baseball PC got bumped up a notch thanks to this auto/relic. Numbered 10/12. Very nice. 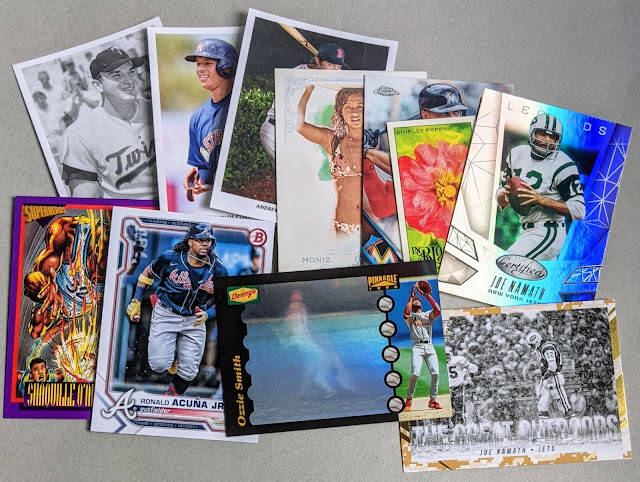 And a few non-hits rounding out the package. Harmon and Ronald making repeat appearances in the post.
Thanks, Wes! Always a pleasure.
--o 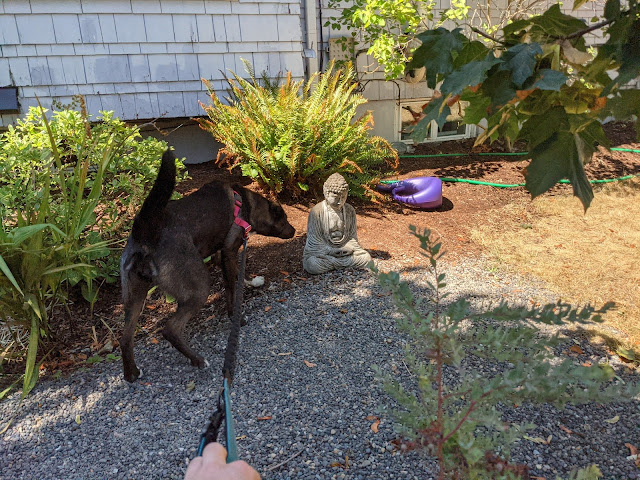 I'll leave you with this photo of Ruby searching for enlightenment.