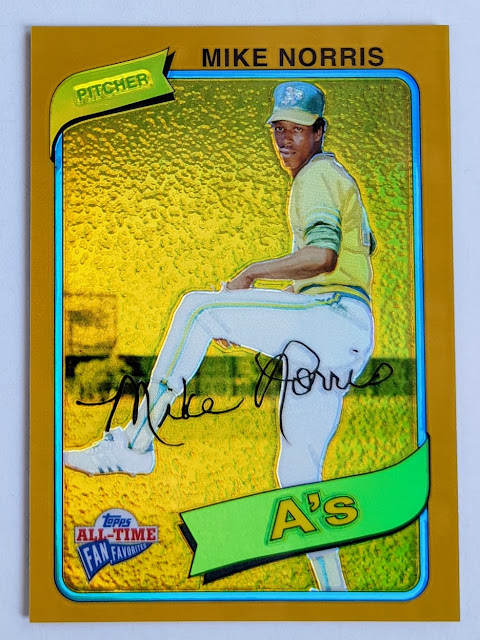 It seems 2005 is the year that someone at Topps presented Michael Eisner with a memo saying "More parallels = more money?" which he signed off on and the hobby has been swimming in parallels ever since. Sure, parallels had been around for years before that here and there, but seem 2005 is when they said "screw it" and made sure every new product had a full slate of "parallels for the sake of parallels" to chase.
In one such new parallel introduced that year, All-Time Fan Favorites added gold refractors numbered /25. My recent love affair with ATFF refractors caused me to check out some and I ended up pulling the trigger on this example. All the gold goes nicely with the A's colors, and in addition to liking the look of the front, the back numbering sealed the deal... 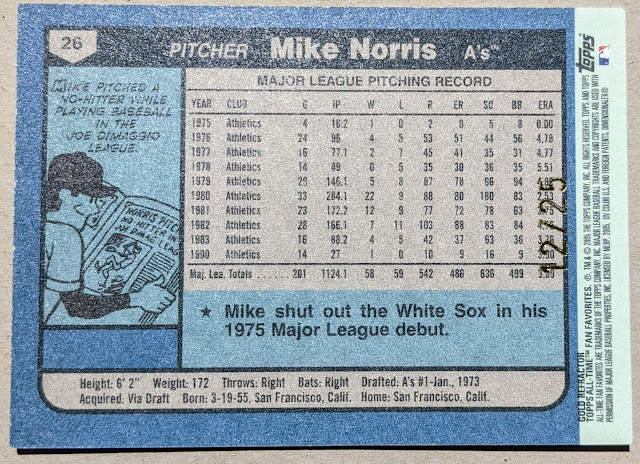 Christmas Card! By the way, today is my half-birthday. Yep, we're halfway to Christmas already.

I gotta admit I don't know much about Mike Norris. He had that 22-win season in 1980 (AL Cy runner-up), though other than that his career doesn't seem too notable. Well, I'm intrigued by the 1990 comeback. That's not a case of Fan Favorites leaving off stats from another team-- Norris spent his entire MLB career with Oakland. Looks like he had been knocked out of the game due to injuries and drug issues in the mid 80s. Cool that he was able to successfully make his way back to the Bigs and contribute to a club that went on to win the pennant. Wikipedia notes he's the only pitcher to get a win for Oakland in three different decades. 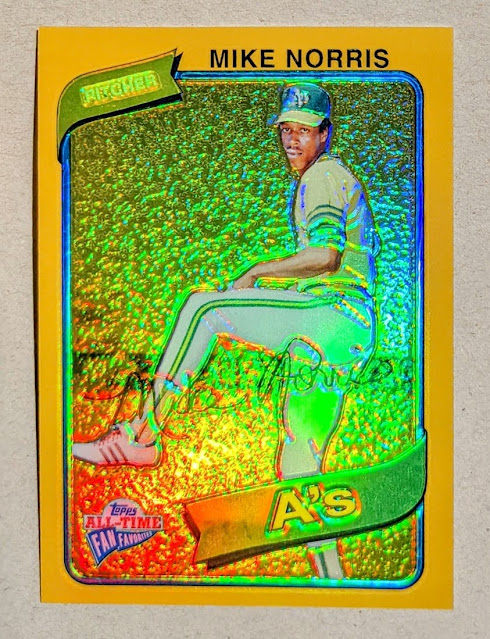 Here's another shot of the front blaring beautifully in the sun.
Thanks for joining me for another round of refraction appreciation!

Nobody guessed last week's winning number. [sad trombone] We were looking for 128. I thought with the hints provided, cardboard detectives would have narrowed it down to about 30-something possible correct answers, and ~30 entrants seemed about the expected turnout for a contest. But you know, I didn't really pimp the contest at all, instead keeping it low-key, and there weren't a whole lot of entrants-- which is fine, but I'll have to adjust. So now.. 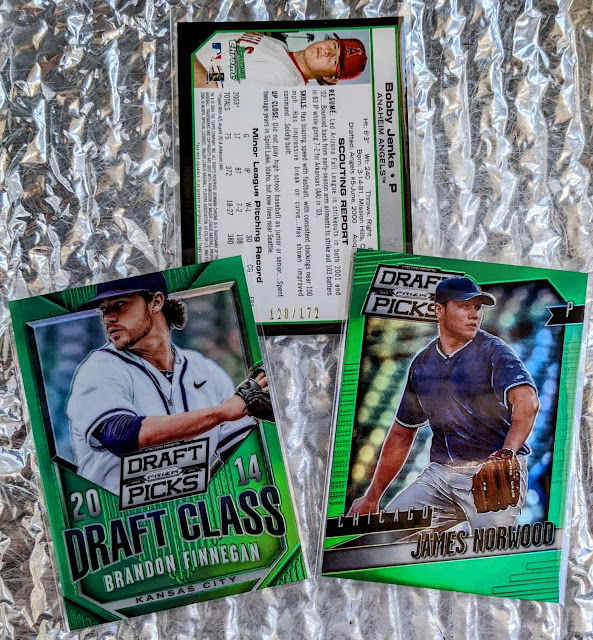 I'm hoping to get a pair of winners this week to help make up for last week. Those 2 green prizm cards are both /35. So if you want to win 4 cards from the prize pool, just pick a number between 1-35 in the comments below. There are 2 possible winning numbers, and heck between you and me, I'll even tell ya they're both even. Only your first guess counts (sorry guys, no "oops, I meant...") and anonymous guesses need your city included in the comment to authenticate.
Thanks, good luck, and have a great weekend!
Posted by defgav at 2:08 PM