Thanks for the trades and stuff

My last post was on Halloween, and as November crept along and I didn't get around to posting again, I figured I'd put together a streak of holiday-only posting and plan the next post for Thanksgiving.

I'm going to try to quickly cover a bunch of incoming cards I've gotten in the past few weeks. 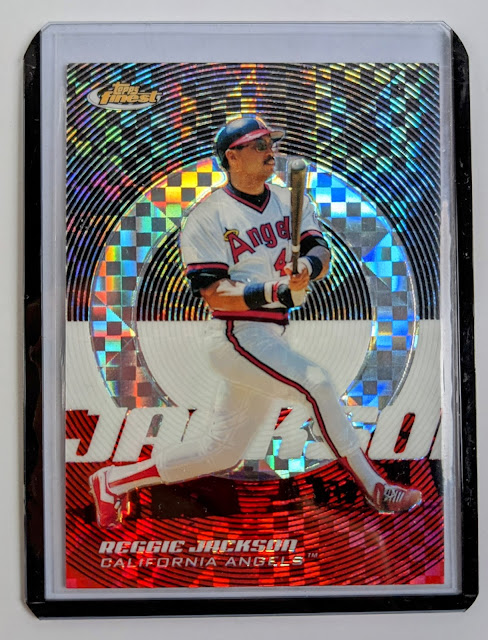 I've been appreciating 2005 Finest more lately, particularly refractor parallels, and think I'll try to pick up a few of my PC guys who are included in the checklist. Dig that crazy design looking like a seismic vinyl record/CD/bullseye mashup! 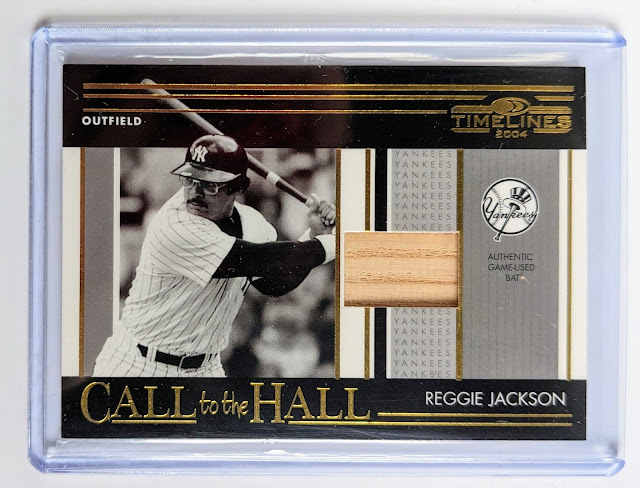 This pair of Reggies were from a 3-card eBay lot, with the not-pictured card being the main one I was interested in, but that'll wait for another day as it's for a project that I'm planning to make into a blog series. But yeah, it was a decent price for the trio and I was happy to add a Finest X-fractor and a bat relic to my longest-running PC.

John Miller sent me over the next batch of cards. 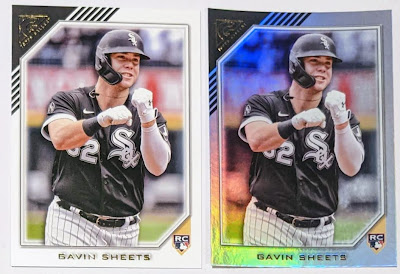 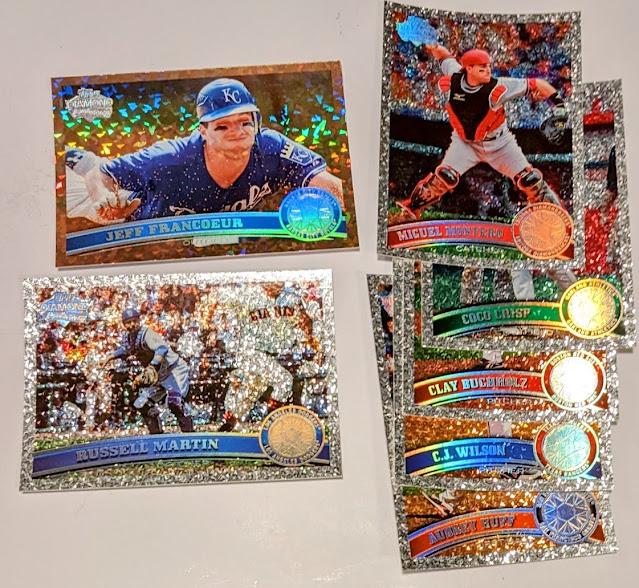 And a bunch of sparkly 2011 Topps for that old project. I really need to sort of everything I've got for it, and I'll be sure to end up with tons of dupes. Maybe there'll be demand for them at TCDB.. I've been trying to add more trade bait there lately.
Thanks, John!
-  - -o
Next is a PWE from Matt who goes by various usernames but I know him best as the Sports Card Collectors guy. He's probably the guy I've done the most swaps with over the years. I'd always keep an eye out for interesting NY football Giants for him while at card shows, and though I haven't been to a show since the pre-covid days (really value my lazy weekends these days), the cache hasn't quite been depleted yet. 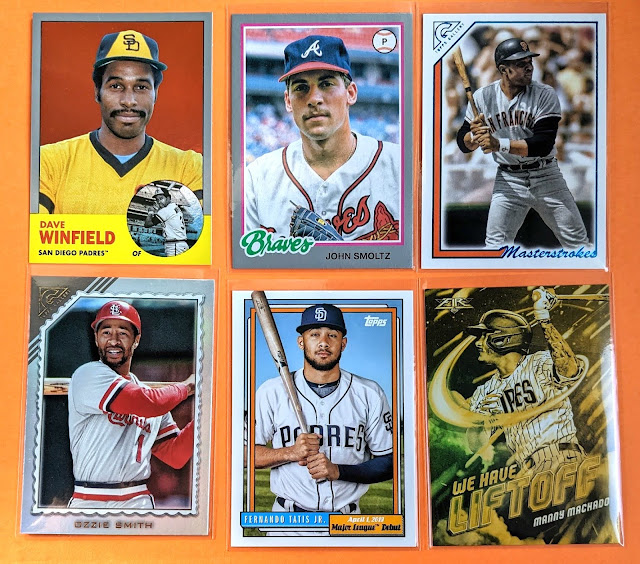 Nice new-card lot of PC guys of mine here, with the top row all /99 parallels. 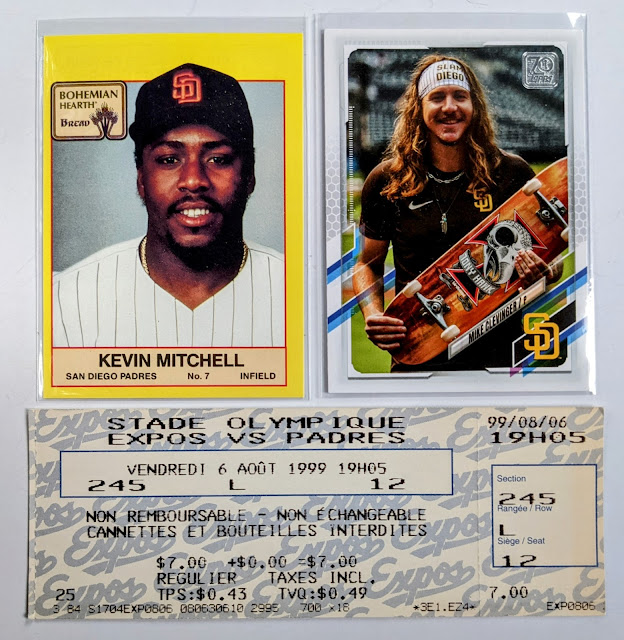 Padrographs Rod recently swung by my house again, this time dropping off a bunch of card storage boxes and 9-pocket pages I happily agreed to give a good home as he continues downsizing his collection. There were also a few cards n' such hiding in the boxes, with my favorites pictured above. A rare solo card of future MVP Kevin Mitchell from his short-term stop in San Diego-- pretty sure this is an upgrade for my completed set of 1987 Bohemian Hearth Bread Padres-- as well as a Mike Clevinger SP photo variation showing off a Tony Hawk skateboard.
The French ticket is pretty cool, too. Looking up this game, San Diego beat the Expos 12-10. Oh snap! I just confirmed my suspicion that this game featured Tony Gwynn's 3000th career hit! So yeah, not just a random ballgame. Sweet! I should make a display piece with this and a card or two that trumpets that milestone.
Wow! Big thanks again, Rod!
-  - -o
You might have heard Sportlots finally starting offering non-sport cards. It's a little late for Lenny as I had in recent months finished off sets such as 1989 Ghostbusters II and 1991 Brockum Rockcards by overpaying on COMC and/or eBay. But going forward, it's nice to have another option that's often cheaper. 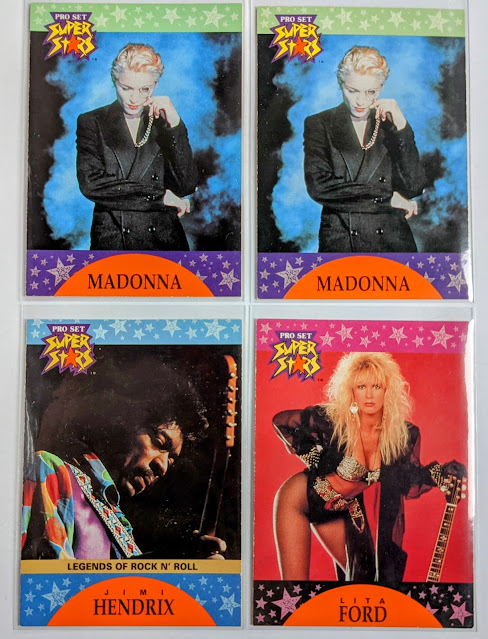 I'm working on a 2nd master set of 1991 MusiCards (and a 3rd set too, kinda). I needed the corrected Madonna and the Lita Ford to complete a 2nd set of these early promos. With room in my shipping cost tier, I threw in the Madonna error card and the Jimi for the site minimum, too.. trade bait, I guess. I was surprised to find the Madonna error (last name spelled wrong on back) so cheap, as it's one of the tougher MusiCards out there. Not pictured, but I also picked up the censored #166 Dread Zeppelin "no nad" variation for the site minimum from another seller.. that's a card that has proved very hard to track down. I had been keeping an eye out for like a year and nobody had it available anywhere except for one big, expensive eBay lot that included it. The gross "nad out" uncensored variation is everywhere, though, tragically. lol
-  - -o
Here's a pair of PWEs from Bo. 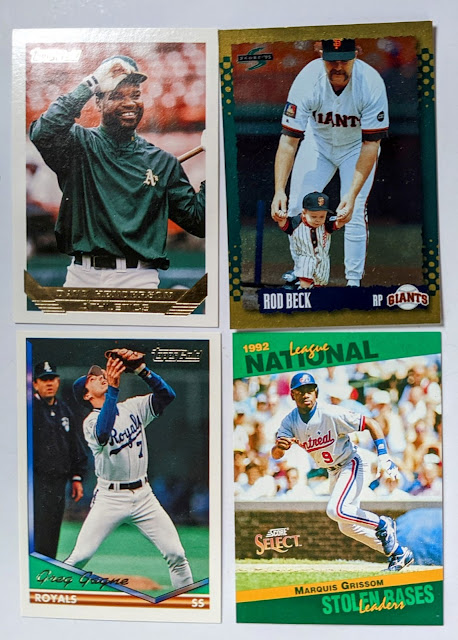 Some PC guys and a mini-collection addition. 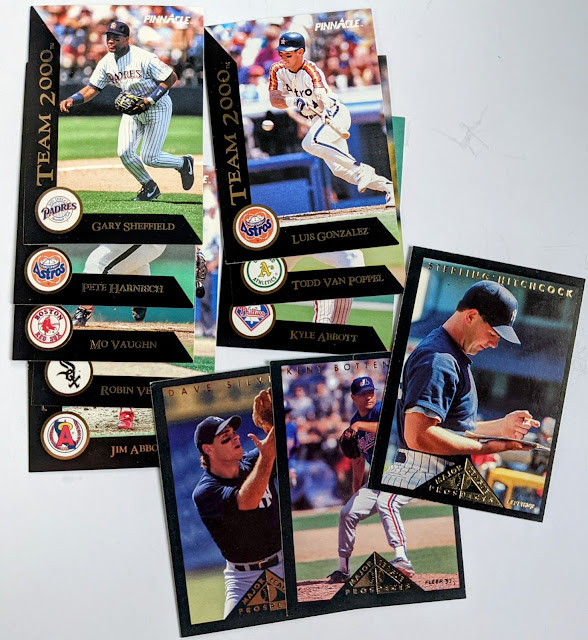 And a bunch of early 90s black gold.
Thanks, Bo!
Shortly after this I realized all the various black gold cards just weren't doing it for me anymore, and I've decided to cut bait on most of the insert sets I had been going after, and just be content with the selection I've been able to put together up to this point. Unfortunately I forgot to remove some of them from my TCDB wantlist, and after I added some good trade bait, I ended up getting some junk-heavy trade offers on the site-- not the '72 high-numbers and Topps ATFF refractors I had been hoping to be offered-- so I had to clean that up. That's the trouble of keeping your own wantlists as well as trying to keep some on TCDB too.
I am still very interested in trying to complete a black gold parallel set of 1992 Leaf, though, so that one is still on my wantlist. I had my series 1 all updated into TCDB, but then I got to series 2 and there's a pointless "no period" variation for all of them. What am I supposed to do with that? Put both versions on my wantlist and end up with dupes? No thanks. I gave up and just said forget it, sticking with my own spreadsheet for now. Bummer.
-  - -o
Next is a surprise bubbler from fellow Portland area blogger Kerry of Cards on Cards. 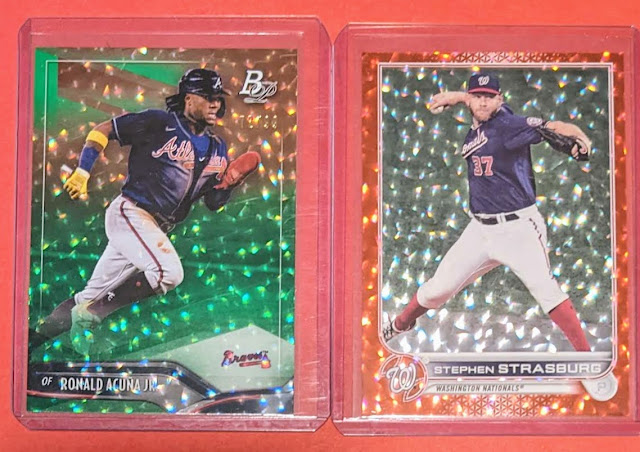 Nice pair of numbered cracked-ice (or whatever they're calling it these days) parallels! 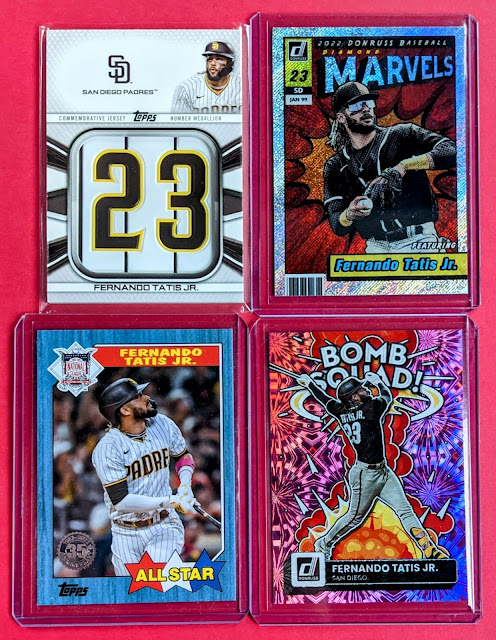 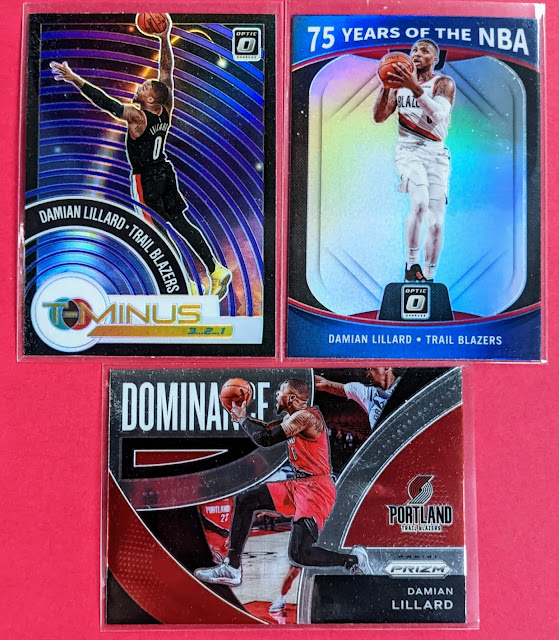 Dame in the house. Love that one with 2005 Finest vibes. 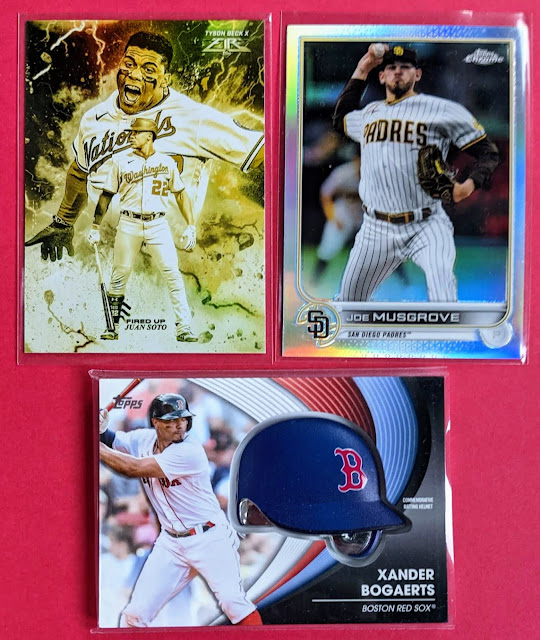 After seeing those new "commemorative batting helmet" manirelics on the blogs, I had the hankerin' to get one of my own--  must. touch. helmet. caress its subtle contours --so it was serendipitous to find this thick Xander among the cards in the package. And yes, it was satisfying to touch the helmet.
Thanks, Kerry! I'll have to dig up a good return for you soon.
-  - -o
It's Thanksgiving, so let's sneak in a football card. 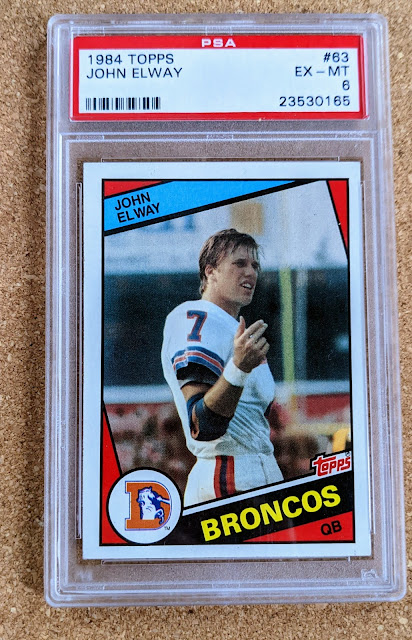 Got a slabbed John Elway rookie in a second swap with my 2003 Topps Retired lovin' bud Dan. I've had one of these for years (raw, of course) but there's a distracting "fisheye" printing flaw right between his eyes. Very happy to upgrade to a cleaner copy.
Thanks, Dan!
-  - -o
Time for a little vintage. 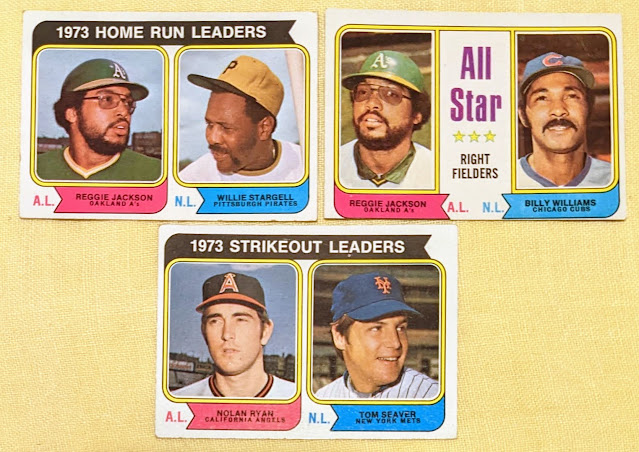 GCA continues to be the MVP for my vintage setbuilds in recent years. These 1974 Topps cards take me down to just checklist #273 away from completing a basic, one-of-every-number '74 set. Then maybe someday I'll finish tracking down the dozen or so variations I'm missing for a master set, but I'm really just focused on that checklist now. I'll have to update my Desperate Double Dozen sidebar wantlist here in a minute. 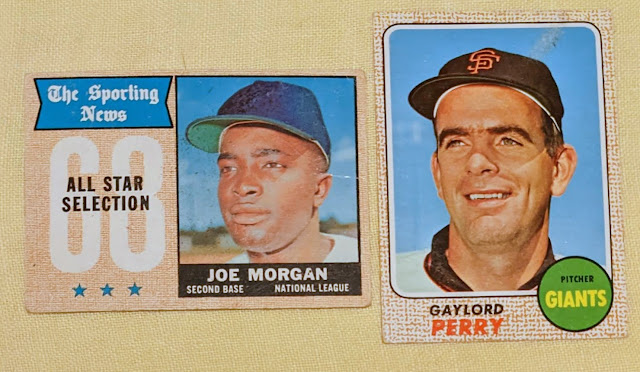 Greg also threw in a couple surprise '68s for my Flagship Topps Binder, with HOFers Joe Morgan and Gaylord Perry bumping out lesser names from my 1968 page.

Thanks, GCA! I've got a return for you in the works to get mailed out soon. 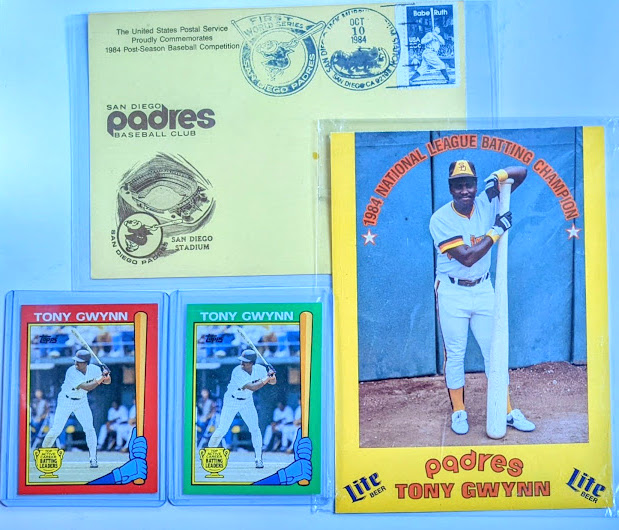 Here's some more Gwynn stuff to go out on. The oversized stuff is from earlier Rod giftings that I didn't get around to showing off before. Gotta love a "big bat" photo!

I like picking up those fun "Kmart greenies" (1990 Topps Active Batting Leaders) cards when I can find a good deal, and was able to land the Tony and also the tougher red counterpart from 1989 as well.

Thanks for reading. Happy Thanksgiving, everybody!