I've been meaning to do a post showing off some of the more-notable recent pickups for my 2004 Topps Chrome  black refractors  parallel setbuild. It's one of my top priority setbuilds, funny enough (meaning I spend time and money on it rather than just put it on my wantlist and wait), and I've crossed off several big names that I haven't gotten around to trumpeting on the blog yet. Believe it or not I'm starting to see the light at the end of the tunnel with this ridiculous idea of a setbuild! 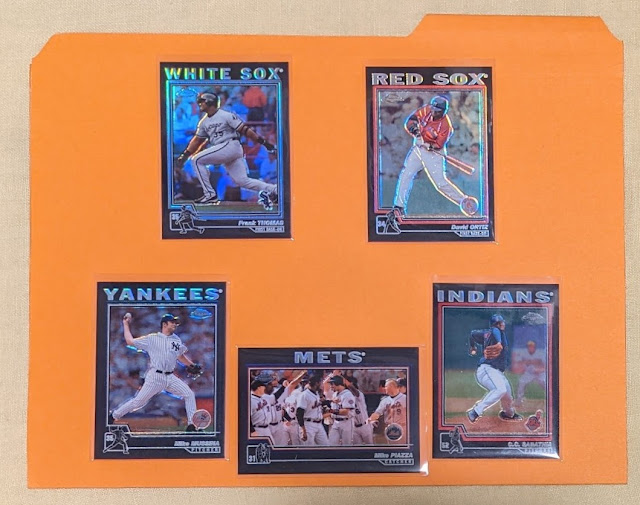 I figured I'd photograph these newcomers with an orange background, and --boom: Halloween themed post for 10/31. Advanced blogger move! Baseball Card Breakdown is back, baby! lol 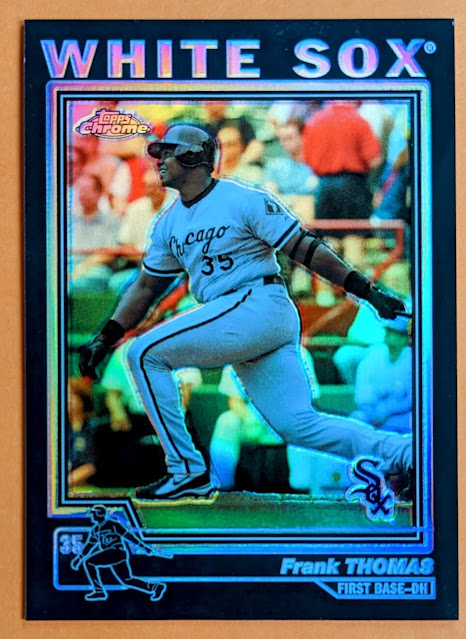 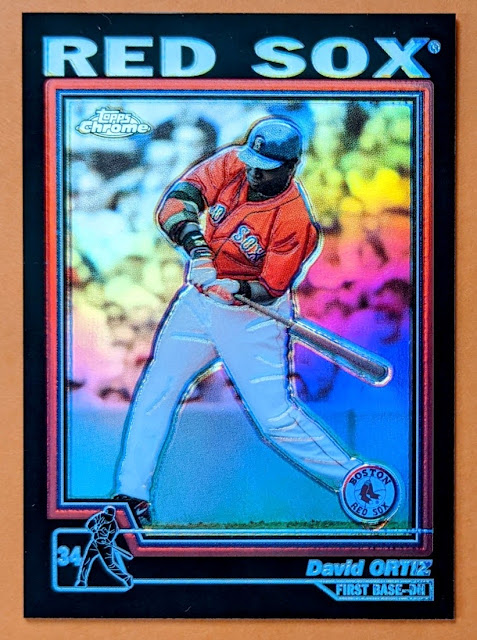 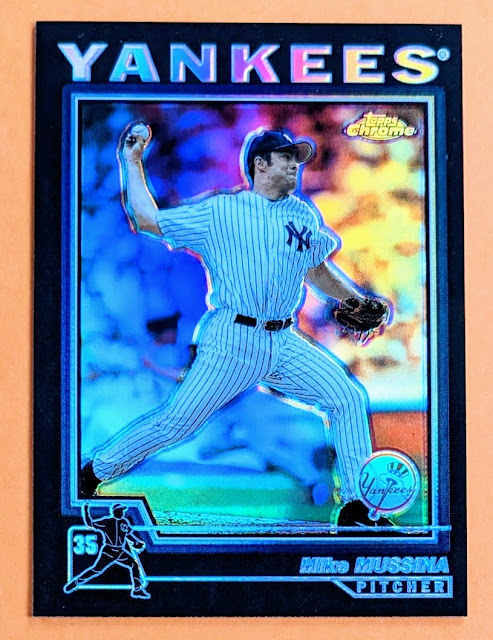 Anybody dressing up as a moose this year? Happy to check Mike Mussina off the list. Quick scary story: I once bought this card on Sportlots a year or two ago.. and it never came! bwah-ha-ha! Sorry for the jump-scare, guys. I've had pretty good luck with Sportlots in recent years, but can't win 'em all. This one came from eBay, a site not without its own horror stories. 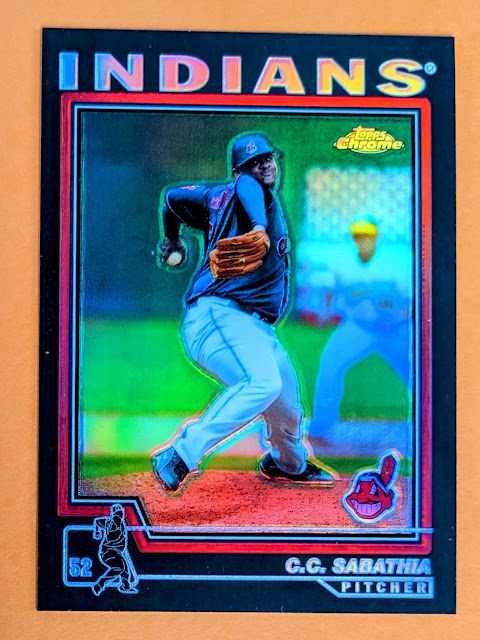 CC Sabathia is likely to get some HOF attention when he trick-or-treats in 2025, though it's up in the air whether he'll be rewarded with a full-size candy bar or just get the ol' Hershey Kiss-off. Hall of Stats ranks him between excellent-but-underrated pitchers Dave Stieb and Kevin Appier, but his time in the NYC spotlight might eventually get him over the threshold. 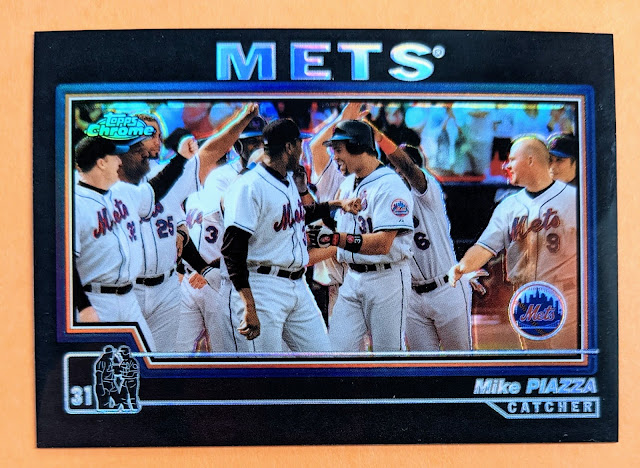 Party time. These days Topps wouldn't try getting away with a guy taking up so little space on his base card, but back in 2004 they could get away with it, as with this horizontal celebration shot for Mike Piazza.

Also got Ichiro earlier this year.
The following pair are in-transit, and so I normally wouldn't show them on the blog yet, but here are the listings' photos for another pair of big names recently secured: 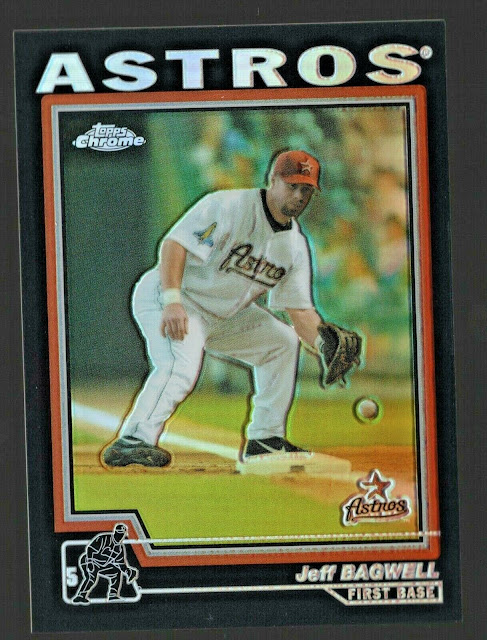 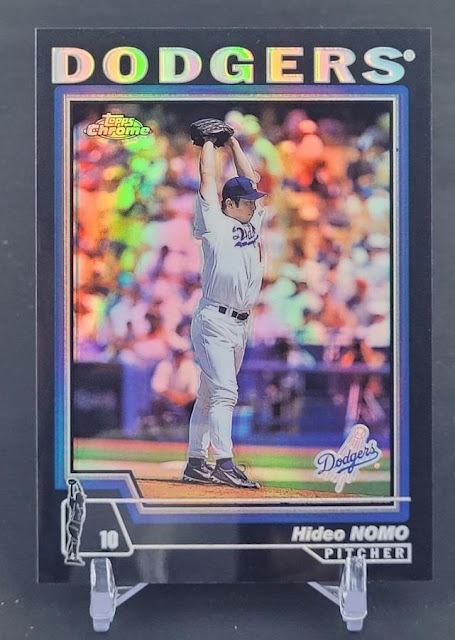 Not too far off from the encouraging 90% mark now. By my count, I'm just over 87% complete. When Bags and Nomo show up, I'll be down to just 60 more cards, most of those commons.

Still have a couple big ones that'll eventually put a hurting on the old wallet: Yadier Molina RC and Albert Pujols. Not a good time to shop for them right now, both having just wrapped up slam-dunk HOF careers, but at some point in the next 5 years I should hopefully be able to snag them for an acceptable price in that lull where they're out of the public eye but before the HOF stuff starts up.