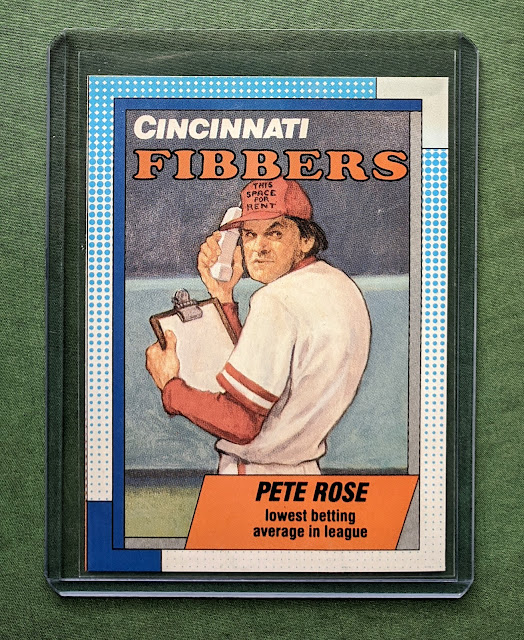 If you're a blogger (or blog reader) and also on Twitter, you're probably familiar with the phenomenon where a blogger will tweet out a picture of a new pickup when they first get it.. then a couple/few days later, they post a blog about it. At first I didn't really like that, but now I consider the first tweet like a "preview" for the following blog post that will go into more detail. Sort of like catching a trailer for an upcoming movie and thinking, "Ooh, I'm looking forward to seeing that one!"

Of course not every tweet turns into a post, but usually if it's something substantial enough, it'll make an appearance on that person's blog before too long. 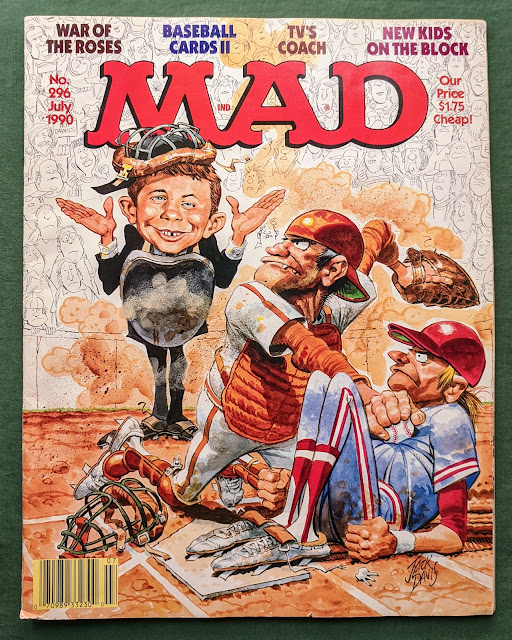 I think I first heard about this on Facebook a few weeks back (I've recently been trying to expand my collector worldview.. not just blogs and Twitter anymore, but now poking around at card groups on FB, and collecting message boards, and I even just joined Reddit the other day. Jury's still out on if this was a good idea or not.)

But yeah, the July 1990 (#296) issue of Mad Magazine touches on baseball cards. I never really got into Mad. It's not that I didn't like it, it just never really made its way into my life as a kid. I don't think me or any of my pals ever bought one of their magazines. I think I had a paperback book or two released under the Mad umbrella (Sergio something?), and vaguely recall liking the silly comics and whatnot in it. (Oh, and I watched the MadTV show for a while back in the day.) But this is my first Mad Magazine. 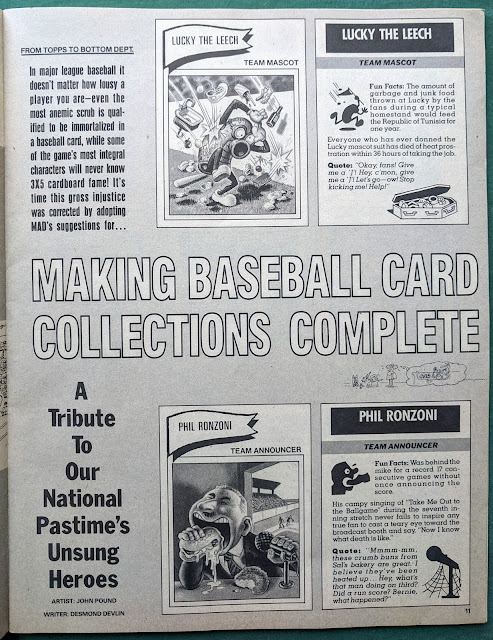 Here's the first page of the baseball cards article in the magazine. 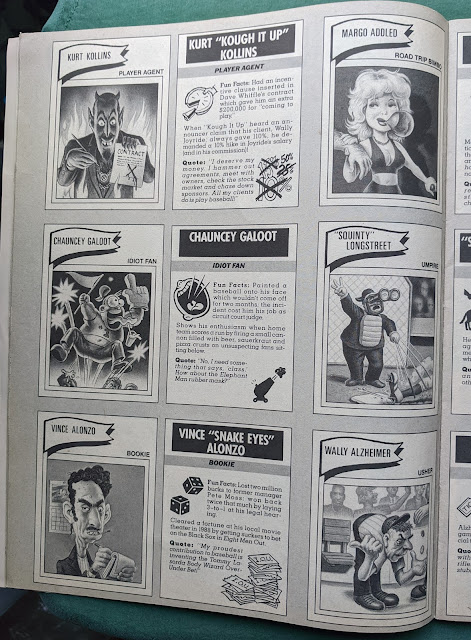 It's mostly card mock-ups, apparently inspired by the 1977 Topps design. I suppose you could cut these out and affix the fronts with the backs if you wanted to try making these into "real cards". But nothing here really calls to me. (...ok, maybe the "Road Trip Bimbo" card-- could be a fun addition to my girlie card minicollection.) 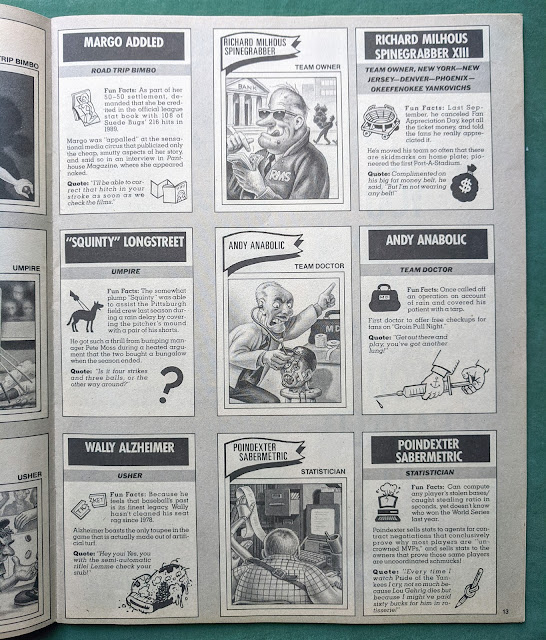 And here's the last page of the article. But the real interest to card collectors has got to be the back cover... 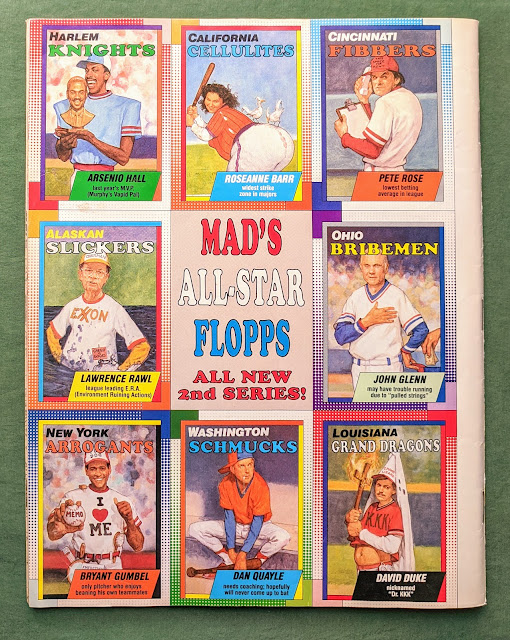 I'm all about 1990 baseball cards this year (celebrating my 30 years as a collector), so when I saw these things in their obvious 1990 Topps design, I had to pick up a copy of the magazine on eBay. Actually, I ended up picking up two. So now I have one to keep intact (above), and another.... 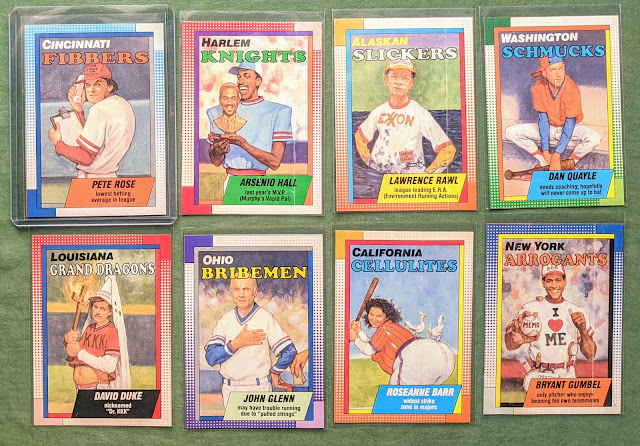 ...to cut up. The Pete Rose goes straight to the PC. I like Arsenio, so I'll probably hang onto that one as well. And I'm almost ashamed to admit it, but I like the Roseanne Barr card too. But the rest are available for trade, I suppose. Anybody collect Lawrence Rawl, Dan Quayle, David Duke, John Glenn, or Bryant Gumbel?

The artist for these was apparently Richard Williams, by the way. 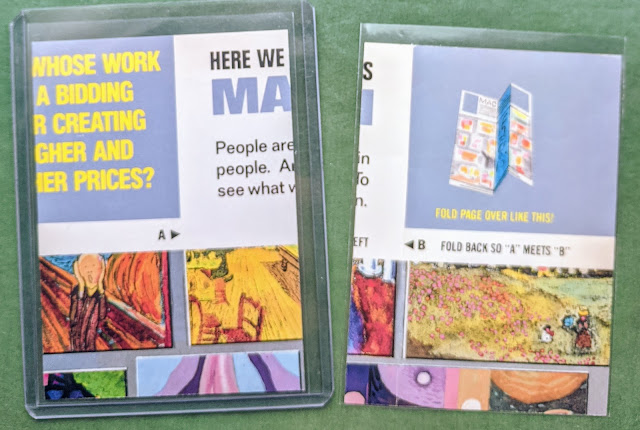 Of course these "cards" aren't on cardstock, just magazine paper, so they're thin. And the inside back cover was one of those "fold-in" gags, so the backs of the cards don't correspond to anything related.

As seen in the uncut photo, these are officially referred to as "Mad's All-Star Flopps - All New 2nd Series". Which begs the question... which issue had the 1st series? Well, I just looked into that and picked up a copy of that one, too. Expect to see it pop up on the blog in a bit. As far as I can tell, there was not a 3rd series.

Thanks for stopping by.
Posted by defgav at 12:48 PM

Email ThisBlogThis!Share to TwitterShare to FacebookShare to Pinterest
Labels: Pete Rose, The spirit of 1990 is alive in Portland