Remember when I did a few "Sentimental Sundays" posts a couple years ago? Been a while, but I'm going to try bringing those back. It's really just an excuse for me to dig out a box of my childhood crap that I've held onto and feature a 4 or 5 items that I think maybe a couple readers might find interesting. 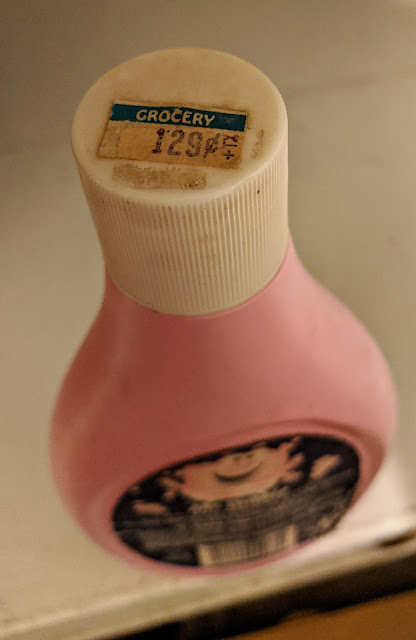 I've kept the bottle of Mr. Bubble I had during much of my childhood. 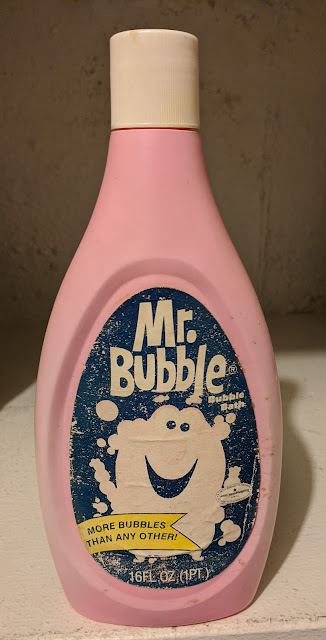 But actually this isn't the last one I had. We had a bottle in the early 90s that had an updated label, but you know me, I love vintage.. and I ended up keeping the old one around anyhow, and have somehow kept it still today. There's even a couple uses of bubble bath left in it. Please note that I don't typically keep stuff like this-- that would definitely be hoarding!-- but no, this is one of the few things like this I might have still. 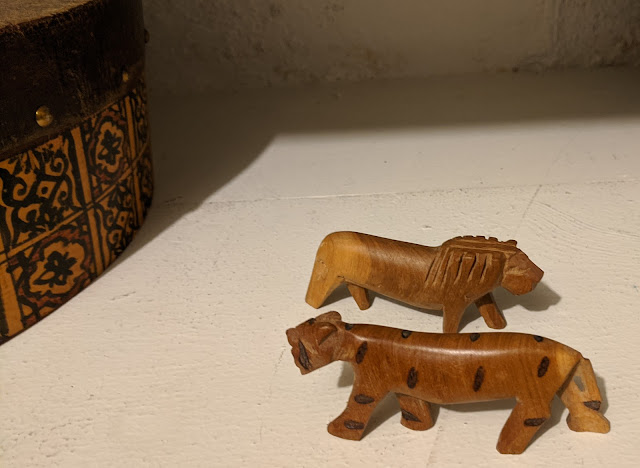 I don't remember where I got this pair of carved animals. Probably an aunt of mine took a trip to Africa in the 80s and brought me back these souvenirs as a gift. Sometimes I'd play with them.. you know, like having them attacking my G.I. Joe guys. lol 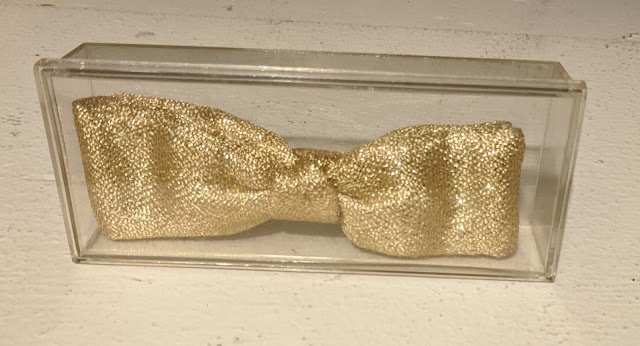 I believe this is the bowtie that my great-grandfather wore at his 50th wedding anniversary. Pretty cool. It's the only thing I have of his. Never met him, as he died before I was born. But seems like a cool guy. He was a big deal in the plastics industry in Chicago back in olden times.

Fifty years is a long time to be married! His son, my grandfather, also got there. I don't think I'll get to there. Well, I think I'd be 86... I guess that's possible. But hey, nobody's promised tomorrow, right?

But anyways, if I do make it to 50 years married, I damn well better remember to put on this tie. 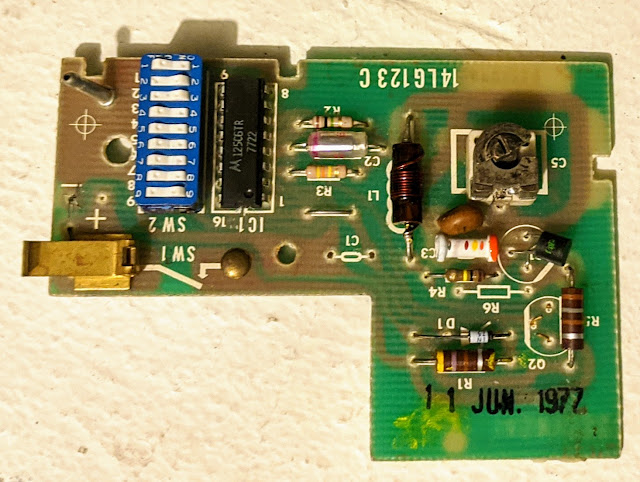 You know how when you're a kid, any little bit of technical crap like this was super cool. Loved this thing. It was from inside our old garage door opener. The little blue box on the left is super fun to clicky-clacky with, if you know what I mean. I believe that is how you set the code for the garage door opener so that you and your neighbor don't have the same wavelength opening garages. Wow, from looking at the date printed on it, this thing is a little older than me! Also, I love how it's camouflage coloring! Fit right in as a "super computer" while playing G.I. Joes. 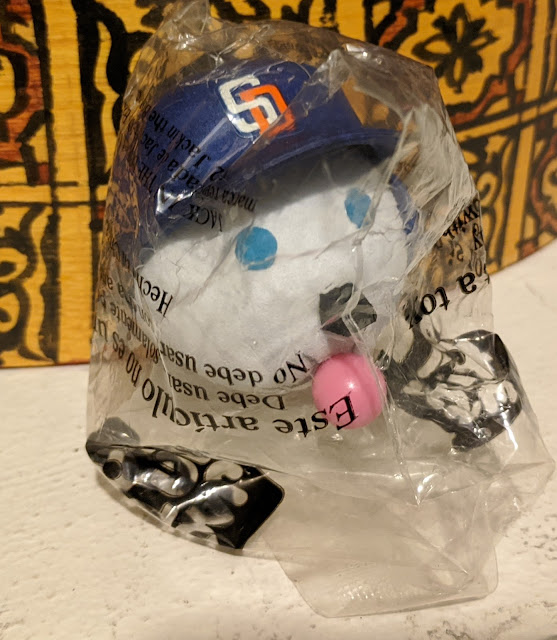 I try to include at least one baseball-related item in every Sentimental Sundays post, you know, since this is a baseball card blog after all. Don't want to alienate my base! 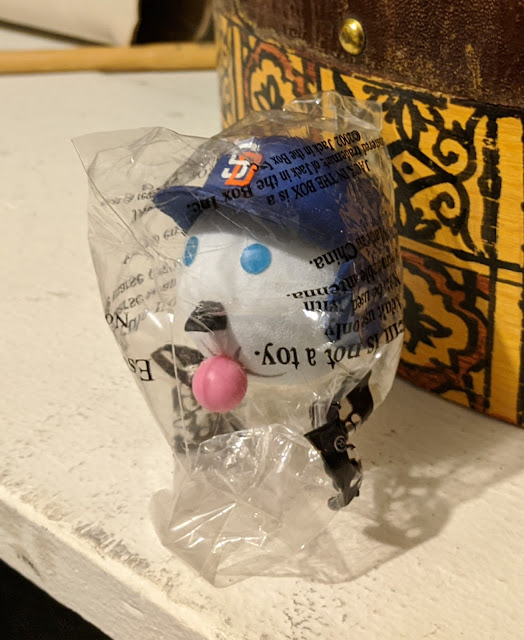 This is an antenna topper that was available from Jack In The Box in San Diego. Or was it a stadium giveaway? I'm not sure. Maybe both. I rarely eat fast food these days (my wife is awesome in the kitchen), but back in my bachelor days, a Sourdough Jack Combo Meal was my go-to when I wanted to splurge on something special.

I bet Bob from Best Bubble will like this thing since Jack is blowing a bubble. I don't think I was actually the one who originally got this, but I seem to recall a friend of mine had an extra one and gave this to me, back in the mid 90s.

Last item for today is this vintage Hot Wheels car.. whoo! That's a classic, right there! 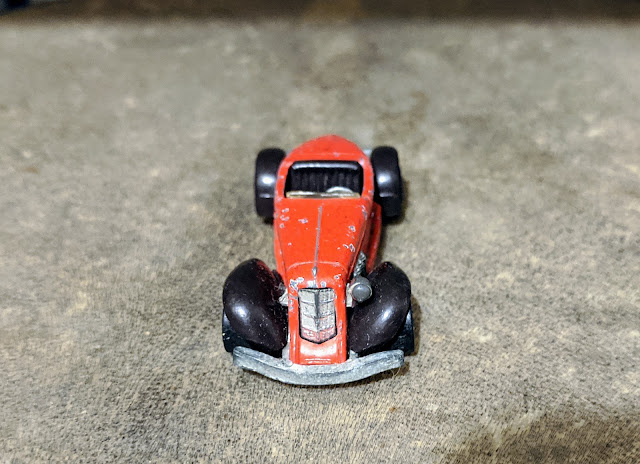 Well-loved. This is one of my earliest toys ever.. One of those toys that you've had since further back than you can remember. I added many more little vehicles like this in my youth (many of which I still have stored somewhere), but this was one of the original fleet. 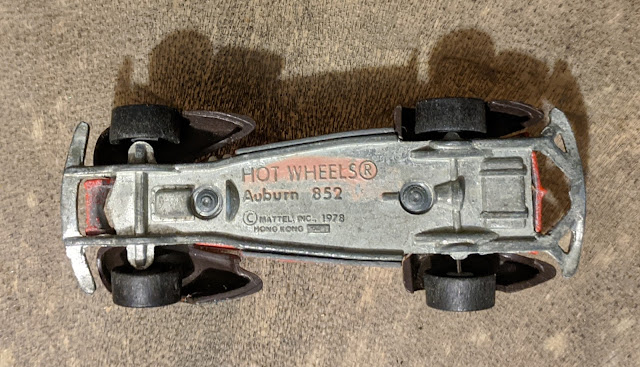 My mom did a thing where she painted a little nail polish on the bottom of my cars so they could be kept track of when I played Hot Wheels with other kids and know which were mine. From an adult collector standpoint, that makes me cringe. It's like parents who put their kid's initials on the back of their baseball cards. Not cool! But my mom never messed with my baseball cards, thankfully. And I suppose if I really cared about resale value of my Hot Wheels, I could probably do some restoration on this, and wipe off that nail polish with some nail polish remover. Searching "Auburn 852" on eBay reveals this is not a high-dollar toy-- one in much nicer condition than mine would likely run you less than $10 shipped. Oh well, it still means a lot to me! I wonder if I've got any "valuable" Hot Wheels. I'll probably keep including them in future Sentimental Sundays and eventually check them out. You guys like Hot Wheels, right?

Quick update on my situation, after my stressed-out previous post... I was eventually able to work it out to where I can get much of my work done at home, avoiding leaving the house as much as possible. Still have to pop out once or twice a week, but it's a whole lot better than my usual work schedule before Corona. Trying to do my part in staying home as much as I can while still having a job.

Oh hey, if you're worried about getting mail during this pandemic, here's an article that may put you at ease. (Your mail isn't really a danger to you, thankfully.) I'll try to get some card mailings out to some people over the next week since I'll have some free time later in the week. I know Billy said he doesn't want to receive cards for the moment.. is anyone else among my usually trade buddies also not wanting to be mailed anything right now? If so, please let me know. Thanks, and thanks for reading!
Posted by defgav at 2:50 PM