Big haul of cardboard from the cardsphere received over the past couple weeks that I need to show off today. Some awesome mailings here that I feel bad for neglecting but mostly I've just been busy/lazy. In the interest of time, gonna try to keep it brief. 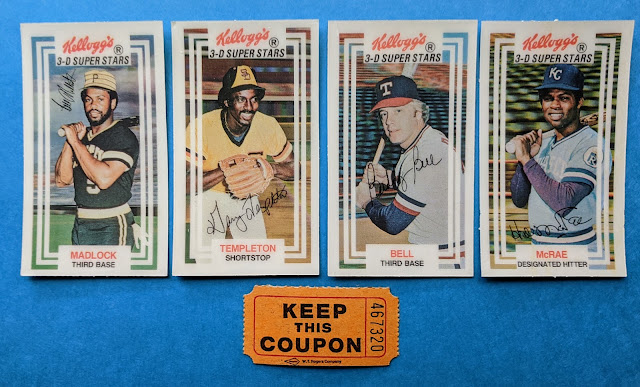 I'm a dummy and spaced on taking my turn during the BFG at Johnny's Trading Spot a couple Fridays back, but Johnny was swell enough to still send me over a little consolation prize. Needed all 4 of these for my newly kicked off setbuild of all the vintage Kellogg's cards.

Thanks, Johnny! You rock! 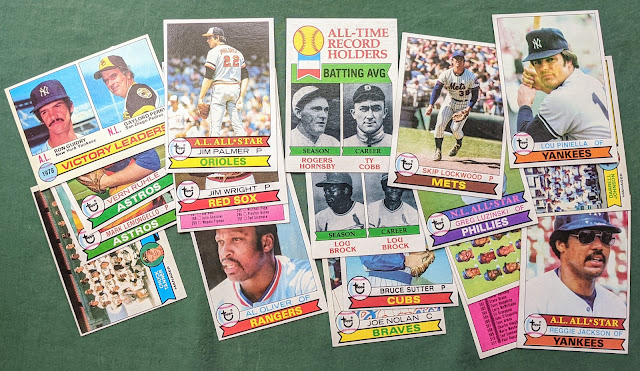 Here's a surprise from Mr. Haverkamp doing his best to chop down my '79 needs. These bring me to 98.9% complete (8 cards left)!

Thank you, sir! Glad my return was what you were looking for. 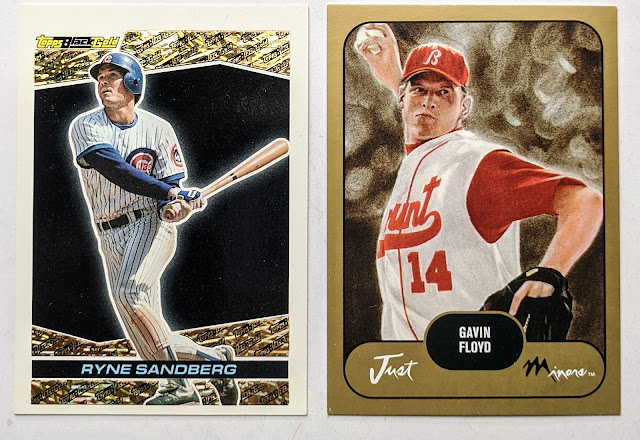 The Lost Collector felt the need to balance the scales a bit to thank me for the customs I sent him last time. He's a good dude. Cool to knock another need off my 1993 Topps Black Gold wantlist.

Next is a package from Bru the Astros dude.

A complementary pairing of Gwynns and a shiny Padre prospect. Sweet! 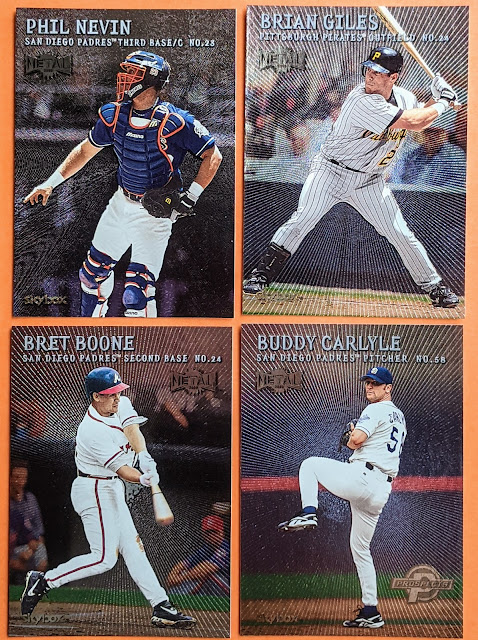 Fleer Metal cards are seeing a resurgence these days... though I think that's mostly the basketball parallels of star players. Still neat cards! 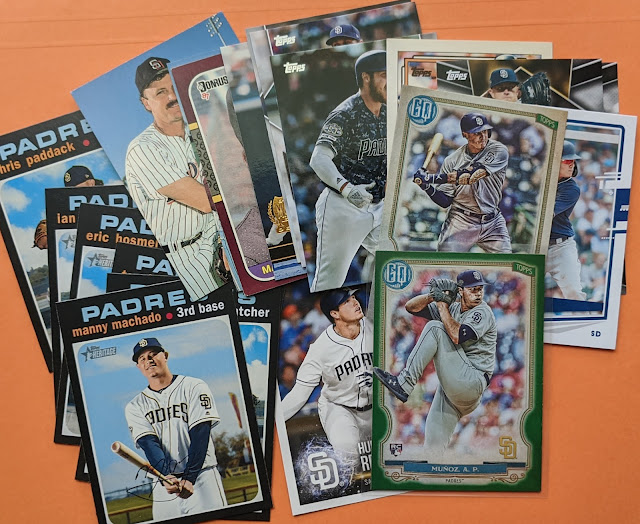 Bru is always good for some assorted Padres. 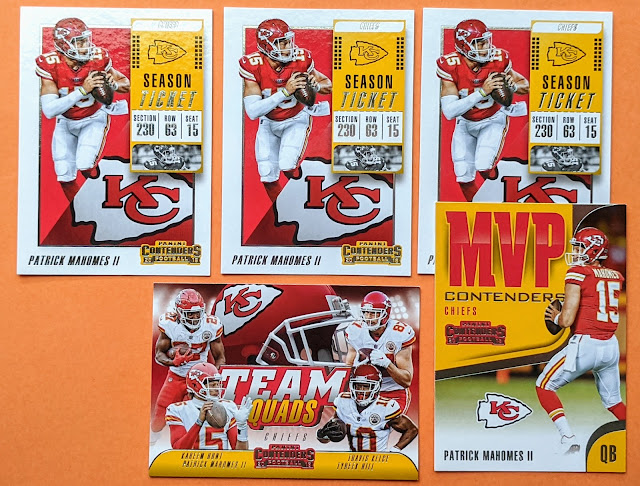 Oh woof, I forgot I had volunteered to snag these 2018 Patrick Mahomes II cards Bru offered up on Twitter back around the Super Bowl. Mahomes is one of the very few guys in the NFL I still care about at all. He's awesome.

Thanks, Bru! I'll round up some good cards to hit you back very soon.

Next up is Cards on Cards going nuts with the goods. 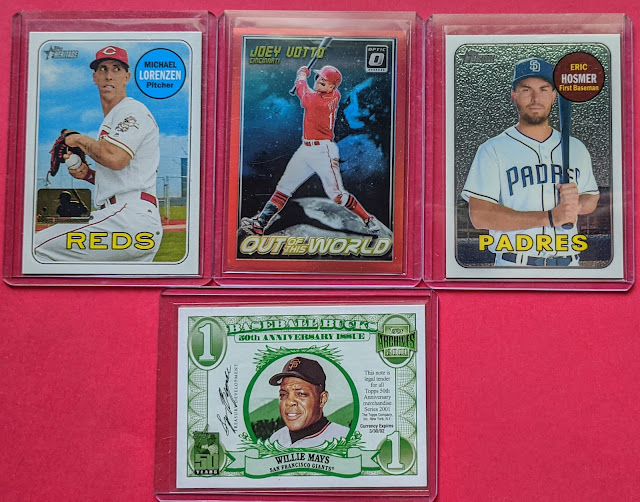 Dig the stamped Heritage and numbered Votto and Hosmer! Willie Mays currency may be expired, but its current value is holding steadier than the US dollar. 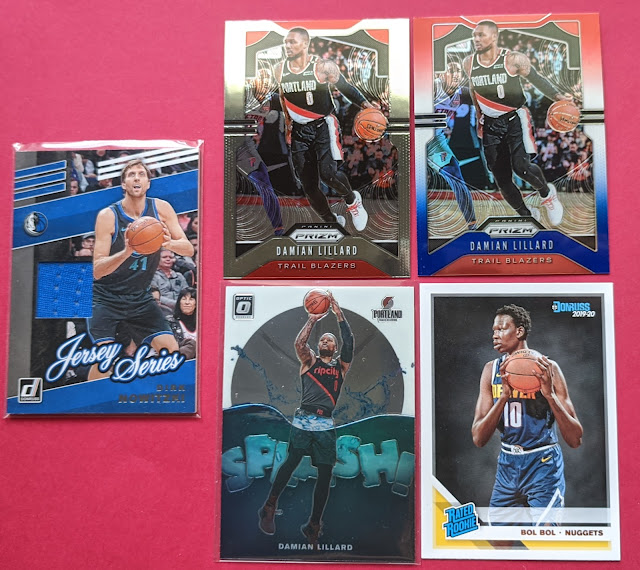 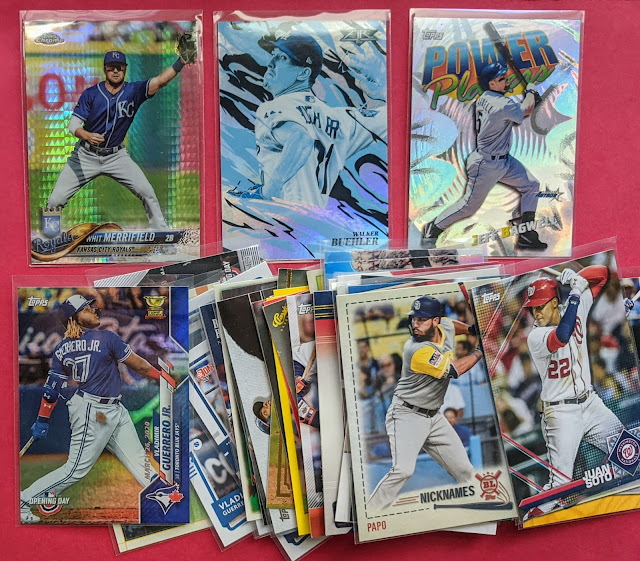 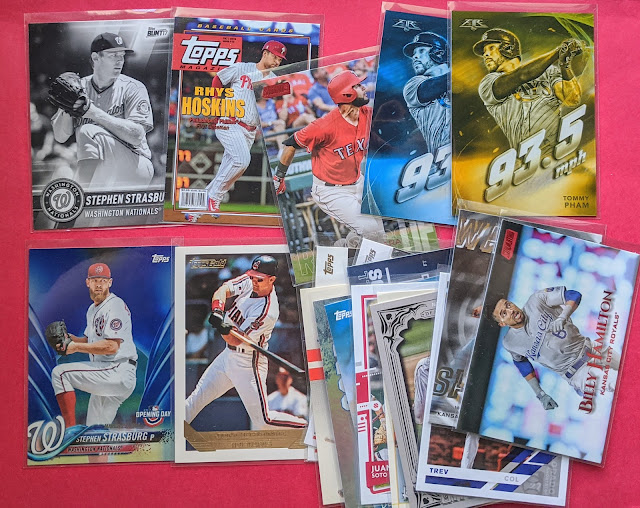 Wow.. a terrific lot of cards from my Portland neighbor.

Thanks, Kerry! I'll round up some decent Cardinals for ya soon!

Next is a bunch of cards from my other frequent local trading partner. Padrographs Rod dropped a couple boxes on my doorstep the other weekend. 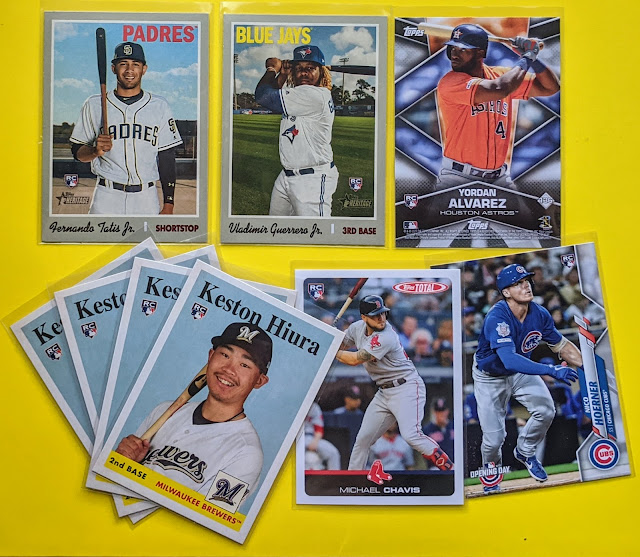 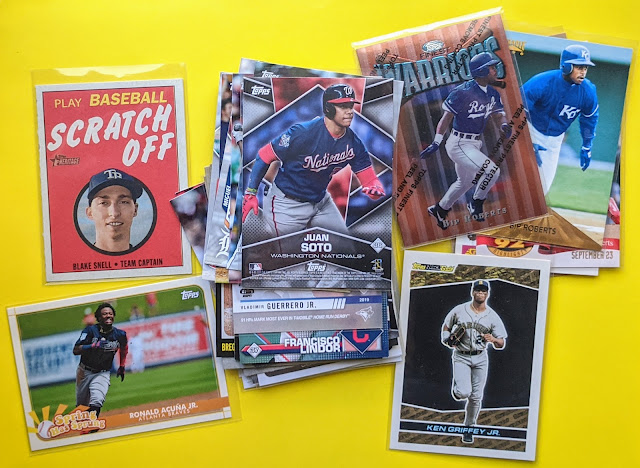 Too many baseball keepers to post, but here are just a few highlights! 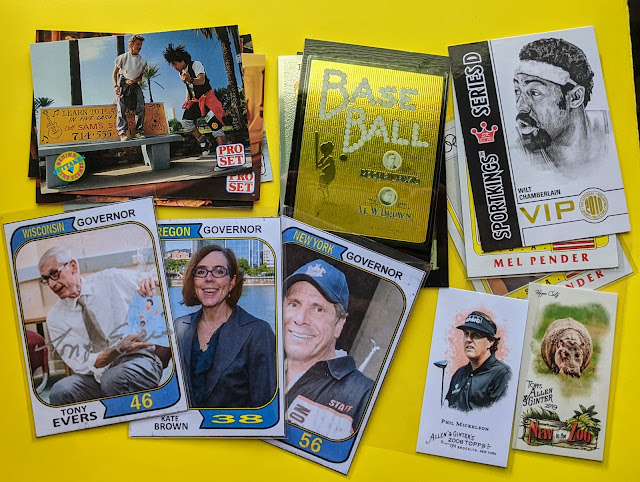 Rod's boxes are always good for some interesting oddities. That Tony Evers custom is autographed. 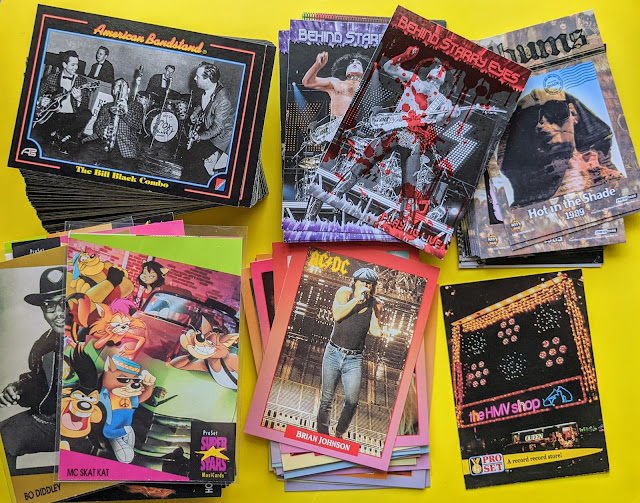 Lots of music cards. Blood-splattered Kiss parallel? Yeah, why not! The MusiCards include a bunch of the relatively-scarce 2nd Series. I think there are some upgrades for my set in there. These days I'm down for pretty much any music cards, though 1991 Pro Set MusiCards is the main music set in my collection and anything else is just a bonus. Oh, but one genre I'm not into is country music. Just not for me. 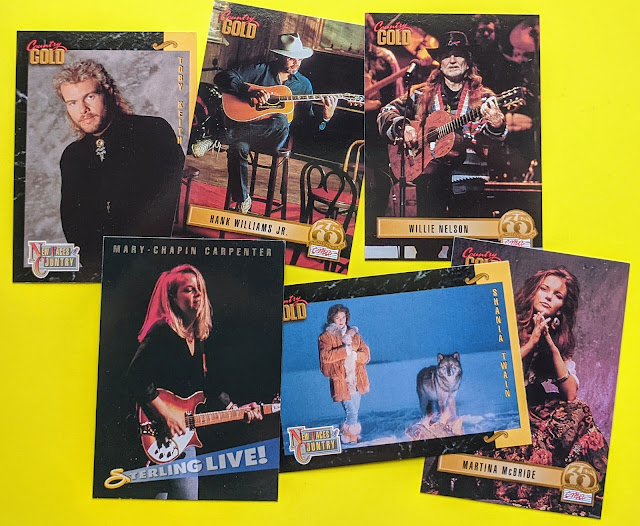 But that said, I was able to find some keepers among the Country Gold cards. Hard to say no to a Toby Keith Rated Rookie, a couple old-school Legends, and some nice looking (and talented) ladies. 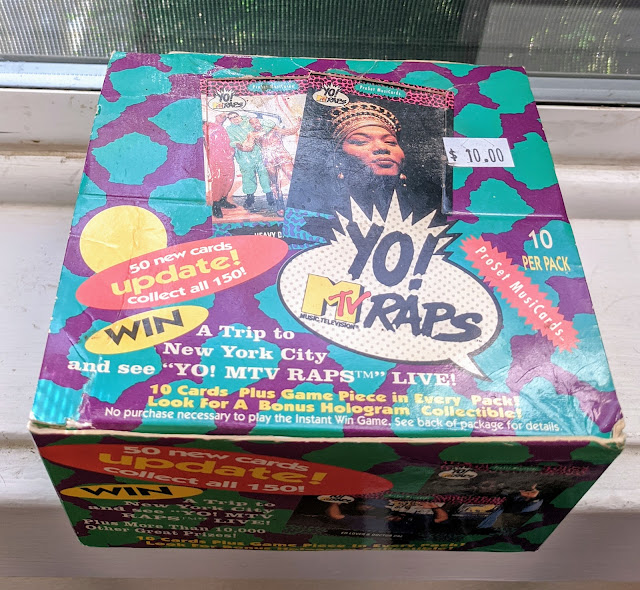 And a full, unopened retail box of Yo! MTV Raps cards! And not just that, but the relatively-scarce Series 2 ("Update")! I've completed the set (bought it complete on eBay), but I still need an ad insert and possibly upgrades, so chances are I'll rip at least a few packs of these one rainy day not too far from now.

Thanks, Rod! Your generosity is always very appreciated!

Last one for today.. and I'm rushing to finish the post, so forgive the uncropt photos. 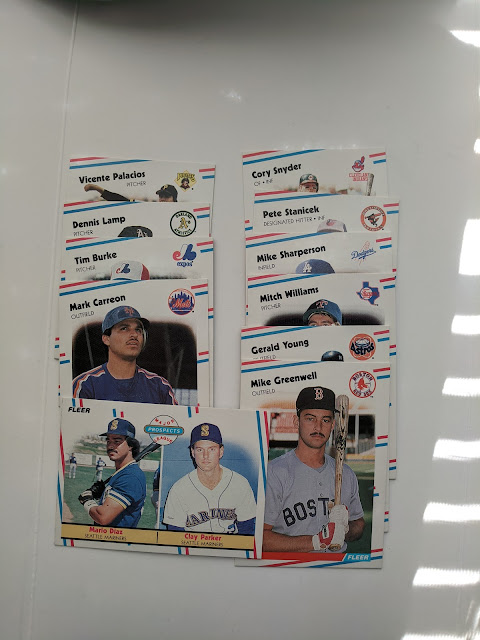 Did a quick little PWE trade with reader David G. hooking me up with several needs for my '88 Fleer set. 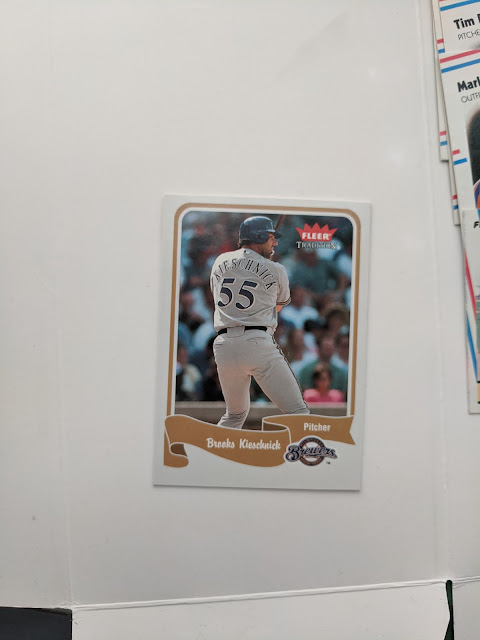 And a long-time Desperate Double Dozen need! 2004 Fleer Tradition #234 Brooks Kieschnick. There are tons of cards from Brooks' days as a Cubs prospect, but I prefer his second act as a two-way player in Milwaukee.

Ok, I think I'm caught up for now! Thanks for stopping by.
Posted by defgav at 9:40 PM