When I was a kid first getting the hang of baseball card collecting 30 years ago, I'd spend way too long at the local card shop looking at cards. I'd stare at nearly everything in the glass cases and on the shelves, slowly making my way around the store. Then I'd dig through the box of commons on the counter and maybe pick out a couple bucks worth of cards that grabbed me. Sometimes I bought a pack or two. And once in a while I bought a card from behind the glass.

The first real "PC guy" I ever had was Reggie Jackson. I probably liked him since he was one of the few baseball players I was familiar with even before becoming interested in the sport. Hey, I always loved Naked Gun! 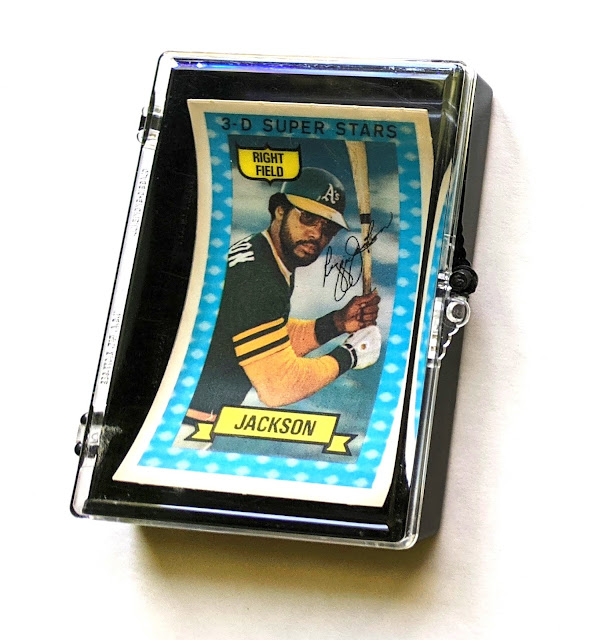 The first vintage oddball that ever caught my eye at LCS was this 1974 Kellogg's Reggie Jackson. I thought it was pretty crazy that this one curved card got it's own clamshell case (or whatever you call these types of cases).

My memory of those days is often blurry, but I have a pretty distinct memory of this. The card was on the top shelf of the glass case to the left of the cash register. I had seen it many times before, among likes of early Tom Seaver and Nolan Ryan cards in the display. I don't remember how much it cost, but I want to say like $10 or somewhere around there. Not super expensive, but not cheap either. But yeah, I finally bought it that day. I remember the shop owner explaining to me that the card was supposed to be curled like that, as it helped the 3-D effect pop. I've since come to realize that was bullshit, but still, I've always been cool with curled Kellogg's cards thanks to that. I know lots of collectors (especially those who pulled them out of cereal boxes as youngsters themselves... notably the cardsphere's own Night Owl) get really bothered by curled and/or cracked Kellogg's cards, but I don't have a problem with them. Maybe I'd feel different if I was collecting back then.

So anyways, not that I really needed more cards added to my ample wantlist, but as of today I'm officially kicking off setbuilds for all Kellogg's baseball card sets from 1970-1983.

It won't be easy and I'm sure it'll take several years; if I ever complete it, it'll be among my greatest collecting accomplishments. But bottom line is I love these cards and I want them all, so might as well come up with wantlists and hope traders can help me fill holes here and there, and perhaps by the time I retire I'll start to see the light at the end of the tunnel and be able to finish the run before I die.

I'm giving myself a couple big "cheat codes" to get through these sets faster:

#1) Cool with Curl & Cracking
Again, these early 3D cards are infamous for curling and/or cracking. Don't care. I'm being "condition insensitive" for these builds-- any condition accepted. If you gave me a choice between cracks and no-cracks, sure I'd take the no-cracks, but I'd still happily take cracks if that's what's available. And between flat and curled, I'd probably choose flat.. but as I say, curled Kellogg's don't really bother me. I find them endearing, even! Perfectly flat Kellogg's cards seem wrong to me.

#2) Vacation from Variations
I plan to pay no mind to the many variations found in Kellogg's cards, which are often just very minor text differences on the back.. a stat off by one digit, stuff like that. Nothing too exciting worth chasing down, as far as I can tell. If I end up with both examples of a variation, cool-- but at least as I begin this project, I'm just looking for 1 card for each number in the checklist. Not doing the "master set" thing this time.

As for other parameters I'm setting for myself:
- Not working on the football sets right now, though I may decide to add them to the mix down the line, so feel free to send any my way if you want.
- Not working on any sets released after 1983. I know Kellogg's continued to offer cards from time to time over the years, but (at least for now) I'm only worrying about the run of baseball sets from 1970 through 1983.

So now let's check out how my run for Kellogg's baseball cards is looking at today's inception. 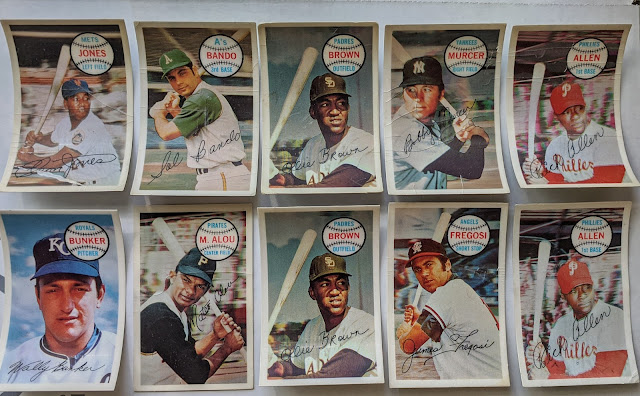 I was surprised how many cards I had from the inaugural Kellogg's set, 1970. Some of them are in good shape, too. The Matty Alou had been in a top loader, so it's the flattest of this bunch. But it already had a crack in it. I freed it and it can curl if it wants to. I seem to have a dupe of Ollie Brown. And while it may seem I have a dupe of Richie Allen, one of those is considered "for the PC" and the other "for the set", but I am keeping them both in the set for now. Yeah, it might not make a lot of sense, but file that under the old "my collection, my rules" motto. Let's say in this instance, the non-cracked version is the PC card. 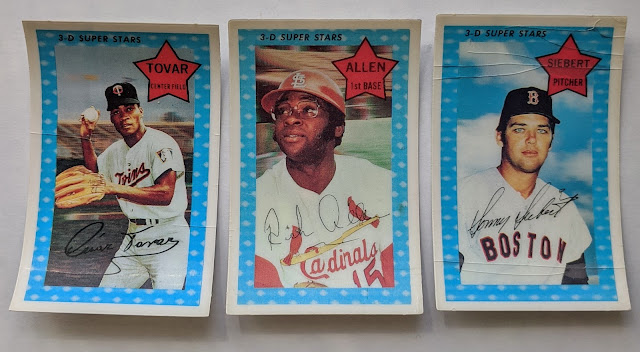 My 1971 cards are also highlighted by Dick Allen.. and it's one of my favorites as it's (I believe) the only mainstream trading card from his playing days featuring a real photo from his season in St. Louis. Technically it's in my Dick Allen PC but "on loan" to the setbuild. Hopefully I'll get a dupe (cracked is fine, like Tovar and Siebert flanking him here) to dedicate to the set.

1972 features the only BIG name I've got in early 70s Kellogg's, Willie Mays. It's an error variation, and is quite beat up.. but not as bad as the Nate Colbert that looks like it might've been kept on the dashboard of a 1972 Buick Skylark for much of the 70s. I have a better condition copy in my Nate Colbert PC (Yes, unlike my Dick Allen Kellogg's cards, Nate's cards stay in the PC. Why? Who knows. That's just the way I'm doing it for now.) While I say I don't really mind cracking on these cards, even I will admit that the Billy Williams doesn't have much eye appeal thanks to the massive crack going through his face. 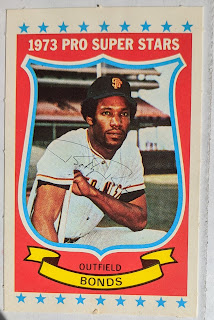 Seems 1973 is the redheaded stepchild of these Kellogg's sets. They decided to take a break from the 3-D thing and just do standard cardboard. I appear to only have this one Bobby Bonds card, but the funny thing is I bought a little starter lot of these years back to get the Dick Allen (which, oh, is still in the PC.. see, I'm all over the map when it comes to "PC vs. setbuild"), but apparently I've traded the rest away over the years before deciding to start collecting Kellogg's.. including trading the Dave Kingman to ARPS in 2015. 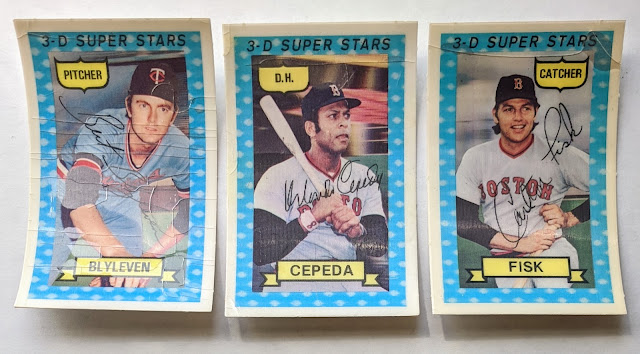 Soft spot for the 1974 design thanks to the aforementioned Reggie Jackson I bought as a kid.. (which I'm keeping in the PC for now). These 3 cards aren't in great shape, but hey, all HOFers! 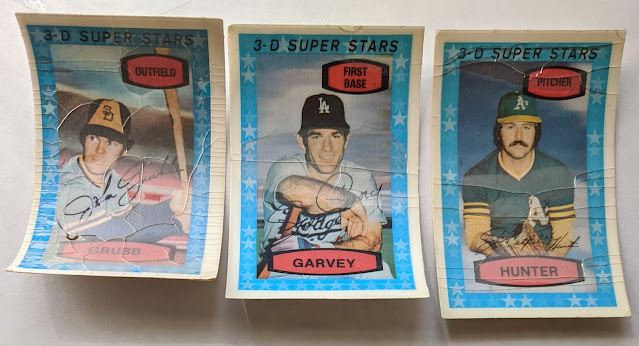 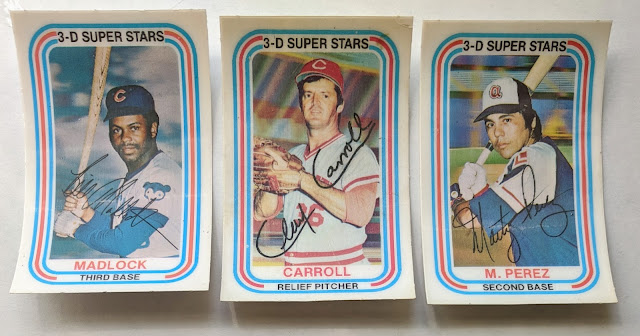 They switched up the design in 1976, apparently celebrating the bicentennial with red, white, and blue. 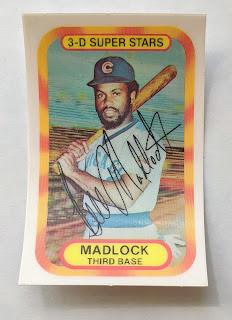 Only one lonely 1977 Kellogg's card in my collection.. and technically I think this belongs to my Bill Madlock PC. 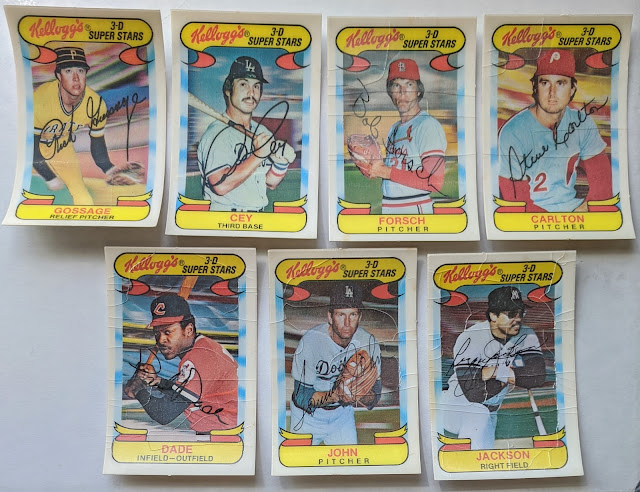 1978 featuring the awesome rarity of Goose on the Pirates. 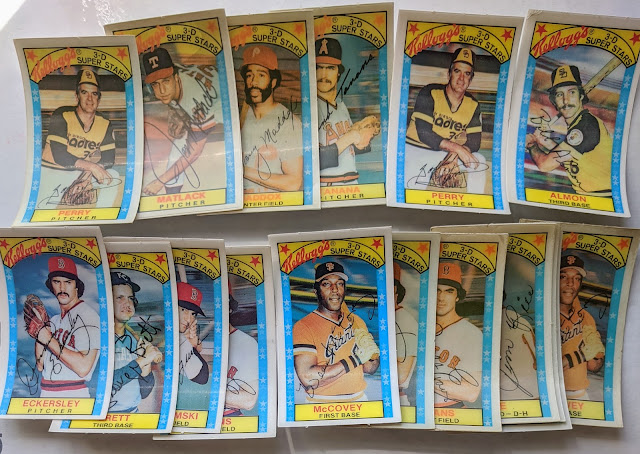 Shakedown 1979, cool kids never have the time for eating cereal that doesn't come with free baseball cards inside. Now we come to the first instance where I have too many cards from a year to try squeezing them all into the photo. Looks like I've got some dupes (Gaylord, McCovey), but again, some of these duplicates might have a home in PCs, but for storage reasons (curling), it's just easier to keep them all together for the time being. 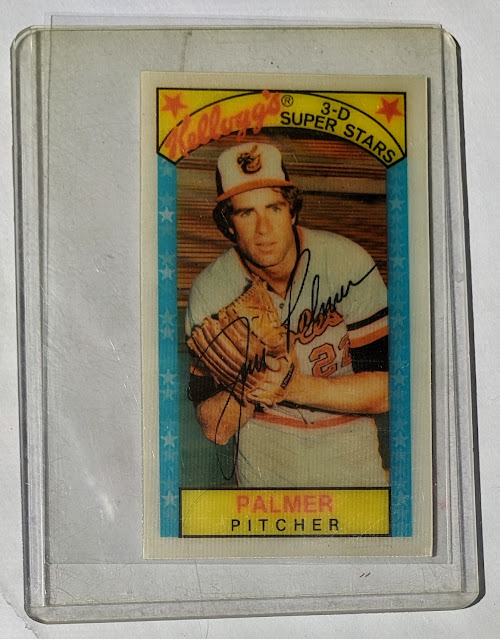 This Jim Palmer will be an experiment. It's totally flat with not a crack to be found. But I'm taking it out of the toploader and letting it be "free-range" with my other '79s. I'll check in on it in the future to see if it curls and/or cracks. I sort and store them roughly from flattest (on the bottom) to most curled (on top). 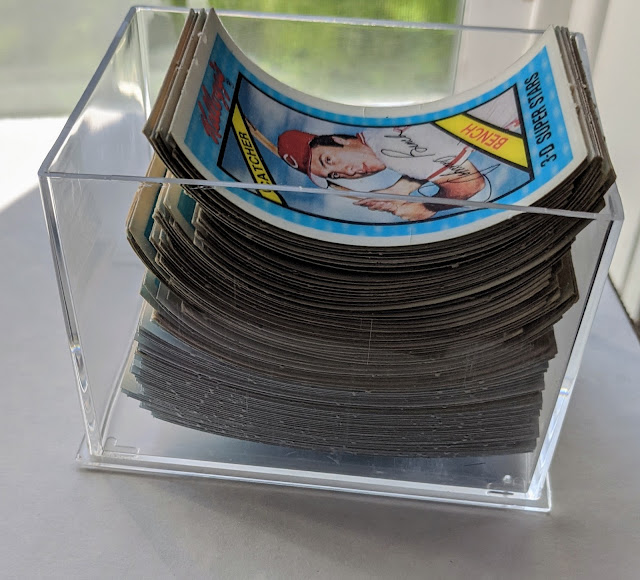 I damn near have a complete set of 1980 Kellogg's! Several dupes in there, too. Like many cards in this post, most of these were included in the lot of Kellogg's I picked up at the monthly card show last year. Just missing 6 more cards. 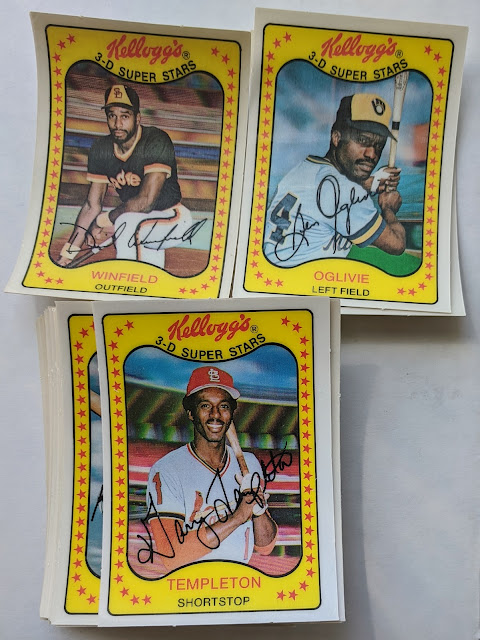 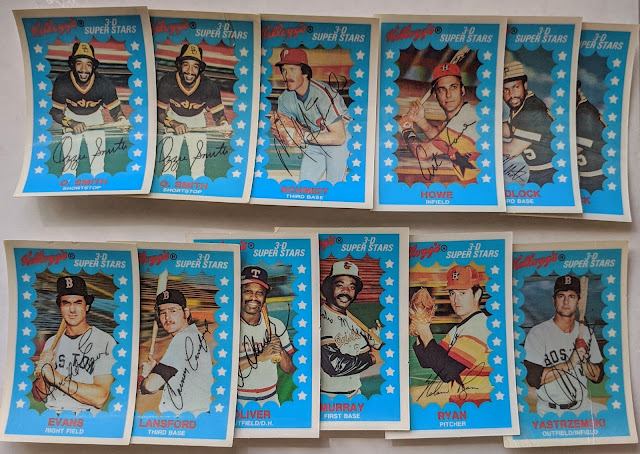 1982 here. The Nolan Ryan is in really good shape. 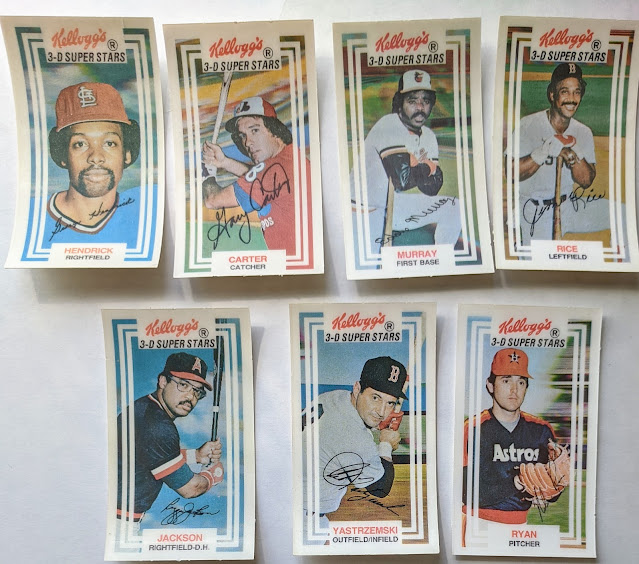 Finally, 1983 saw the streak of yearly Kellogg's baseball cards come to an end. The narrow design gives these guys a bit of a tobacco mini feel to them. Another sharp Nolan.

Anyways, as I was saying, I'd like to work on collecting those old Kellogg's sets.

Oh yeah, I better share the link to my wantlists!..

If you have a moment to check that link and happen to have any available cards I need, I'd love to hammer out a trade. Thanks and have a great weekend.

Email ThisBlogThis!Share to TwitterShare to FacebookShare to Pinterest
Labels: Kellogg's