Time for another trade roundup. Lots of quality Topps cards from the 70s to show off in this post. Our exhausting new puppy has cut into my spare time for carding activities, so I'm trying to limit my trading commitments.. but cards keep arriving and I try to keep afloat! (Apologies to the few guys I've been slow to send cards or reply to regarding trade propositions.. will try to catch up when I can.)

This first mailing up is a doozy! I believe it's my first exchange with Scott Crawford, who has been blogging a long time but we just hadn't crossed paths much before. But some of my music-related customs caught his eye and so we hammered out a deal sending him a short stack of Baseball Card Breakdown originals in exchange for some vintage Topps, heavy on '74. 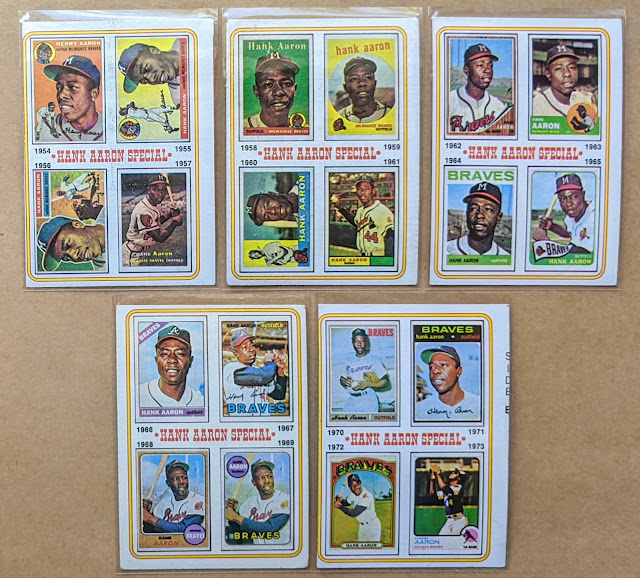 Look at all these Hank Aaron cards within cards! These are pretty neat. I'm lucky enough to own a few of those older Aaron cards. I was excited thinking I had completed all the Hank Aaron cards in 1974 Topps with these, already having the "New Home Run King" card #1, but looks like I'm still short the All-Star card he shares with Dick Allen. I've got that card in my Dick Allen PC, but since I consider Mr. Allen one of the top dudes I collect, I'm reluctant to pluck out a PC card for a set (something I'm otherwise not all that opposed to). But maybe if I get down to a couple cards left and it's one of them, maybe then I'll cave and worry about replacing the PC card later. ("PC" in this context is for "Player Collection", for any newbs reading.) 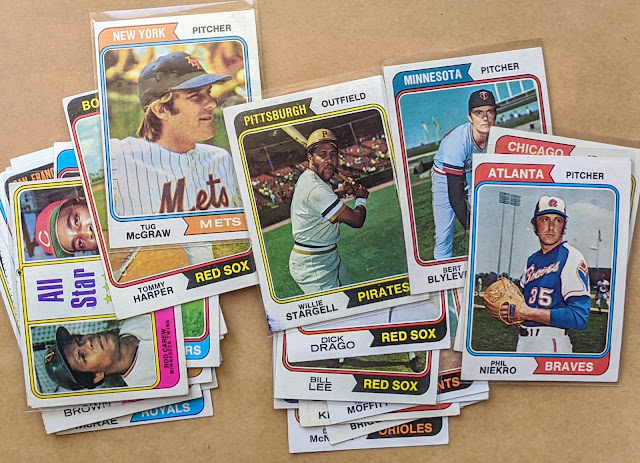 And a bunch more '74s from Scott! Thanks to these, I'm down to just 45 more cards on my wantlist for the set (a decent percentage of which are Washington Nat'l variations).

And some big-name '79s. The Reggie on the end isn't a dupe, but rather a Burger King card. Note the difference in space above his helmet.

Thanks, Scott! Just mailed out your customs. Pleasure dealing with you!

I know I said I'm trying to cool it a little on trading for the time being, but I made an offer on Twitter last week for anybody to send me vintage needs in exchange for a Joan Jett custom I made a little while back-- trying to swing a few quick and easy trades-- and got a handful of guys to take me up on it, with two swaps going through so far. 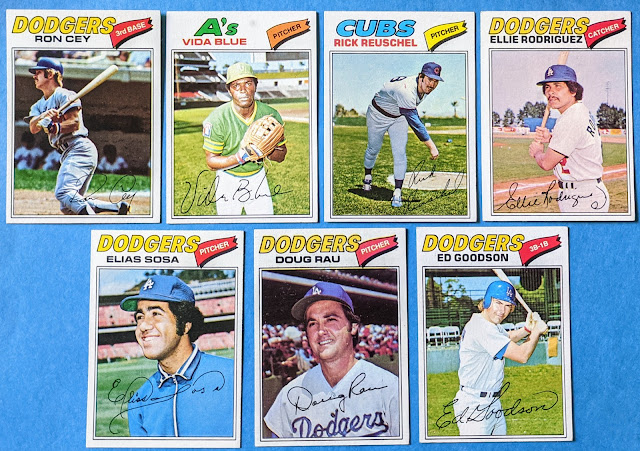 Night Owl sent me a PWE heavy on '77 Dodgers I needed for my in-progress set. Looking good! 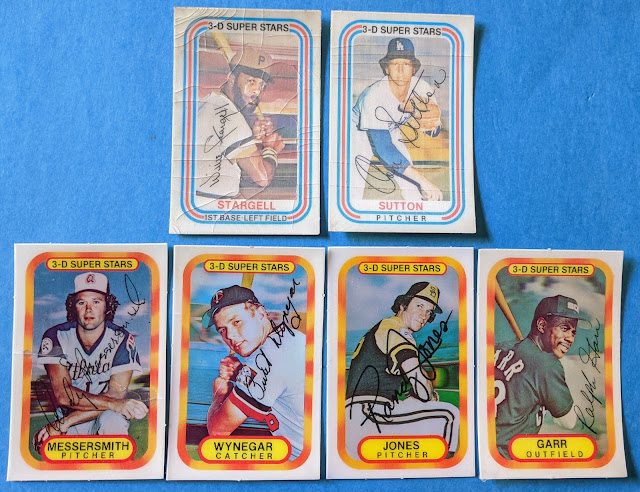 And there were a bunch of Kellogg's in there, too! Always love to see those funky 3D beauties slip out among the cards I receive.. Even when cracked to hell! (Pops is shaping up to be the star of the post, and we'll see more of him in a moment.)

Thank you, Greg! A return is on the way to you currently.

Here's another bounty thanks to Joan Jett. 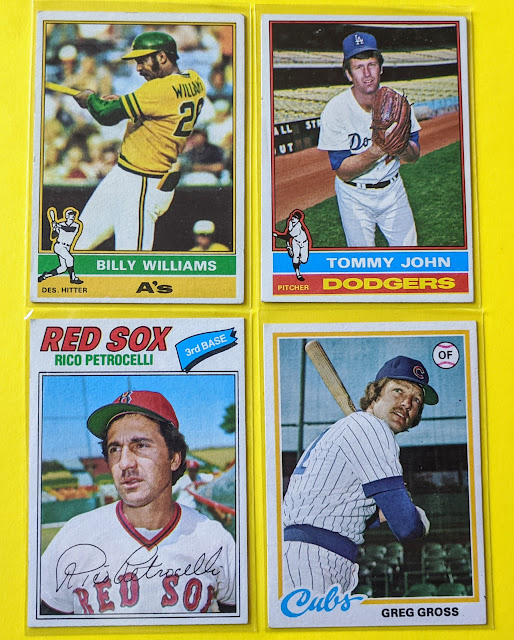 John @phitter72 on Twitter is a guy I was familiar with due to his amusing "Literals Series" customs he shares (such as a card depicting Ernie Banks doing his banking). This was my first swap with him, netting me 4 solid names to check off my 70s vintage Topps wantlists, highlighted by Billy Williams' final card as an active player. Thanks, John! 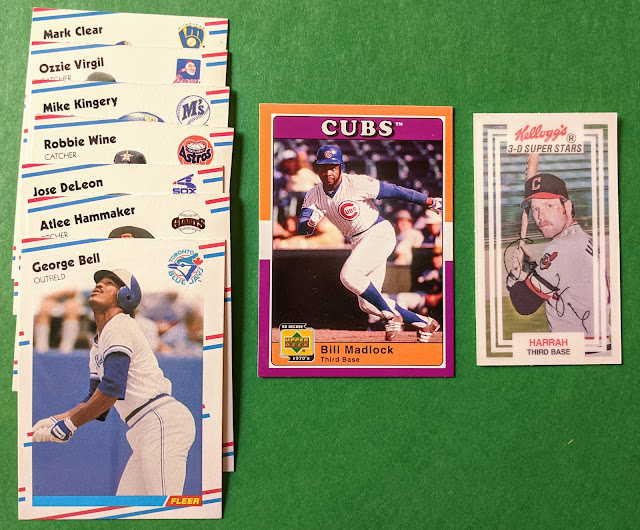 Reader David G. returned with a 3rd recent PWE of '88 Fleer needs for me, plus a Madlock and another wonderful Kellogg's need. Thanks, David.. I'll scrounge up another envelope of Cardinals for you soon. 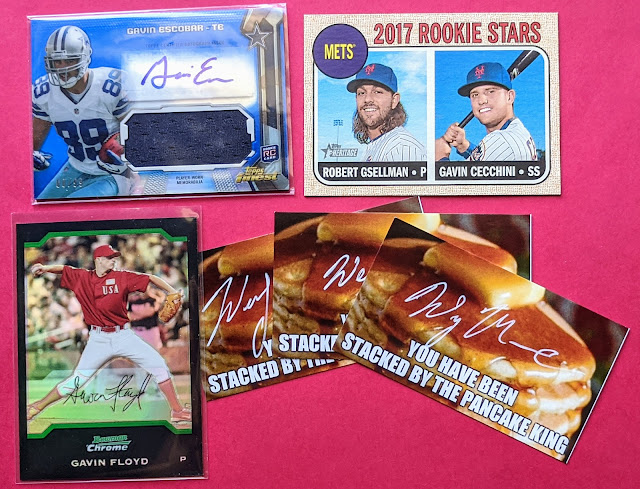 Wes, a.k.a. The Pancake King, dropped a shortstack of 3 PWEs on me in short order, each containing one Gavin card plus an autographed business card. Bonkers! Thanks for thinking of me, Wes!

Last one for today is a great bubble mailer from ARPSmith, hitting me back for a package of cards I sent him recently. 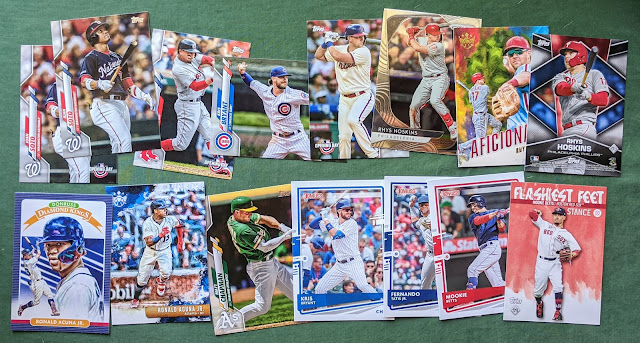 Nice bunch of current cards featuring guys I collect. Man, this 2020 "season" is wild. I'll be surprised if we actually make it all the way to a World Series this year, but here's hoping for the best. 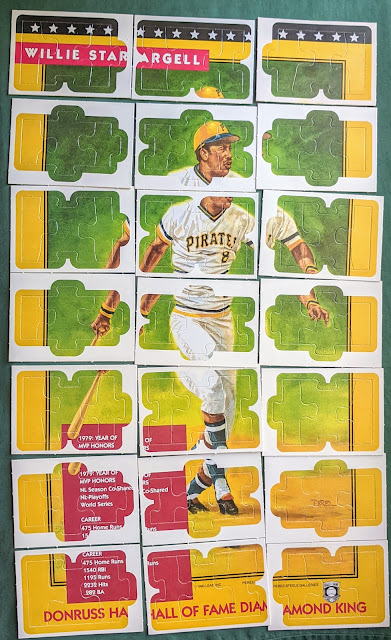 Complete Willie Stargell puzzle from 1991 Donruss! This'll be nice to bolster my Pops PC. If/when I get a second set, I'll bust out the pieces and piece it together. 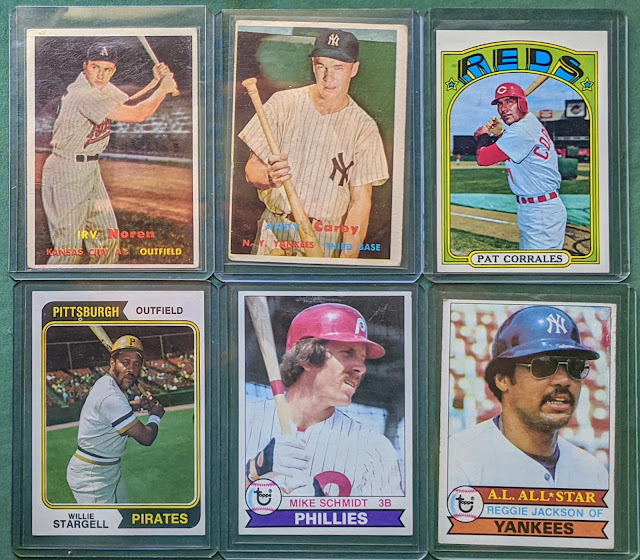 The real punch of the package was the vintage. Been a while since I've added to my '57 Topps setbuild.. not since 2019, in fact. The pair are both from the toughest series, making them even more of a big deal. Same can be said for the '72: first time all year I get to update my needs spreadsheet, and it's a tough high number, to boot. Nice!

As far as the 74 and 79s, they might look familiar, as this same trio was among the cards I showed from Scott Crawford earlier in this post. Adam's copies are in better condition, so they'll go into the setbuilds.. But don't worry, Scott's cards can still find a home for now in the respective PCs since I collect these guys too.

Thanks for another great trade, Adam! 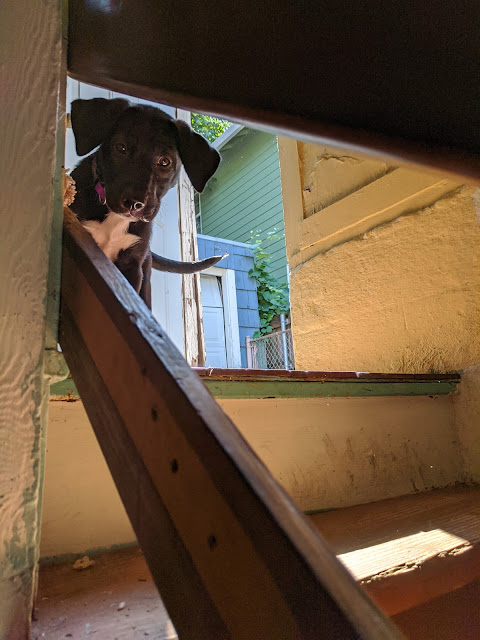 That's gonna wrap up the post. Thanks for reading, everybody. Stay safe out there.
Posted by defgav at 1:45 PM