Yep, I'm following up a Jose Canseco post with a Mark McGwire post. I kinda collect the Bash Bros, but honestly it's mostly thanks to them appearing on The Simpsons: Jose in the classic "Homer at the Bat" softball ringer episode, and Mark showing up near the end of a later episode socking dingers and hiding sensitive documents under his hat.

I recently decided to get around to finally adding a McGwire auto to my collection, and here it is. 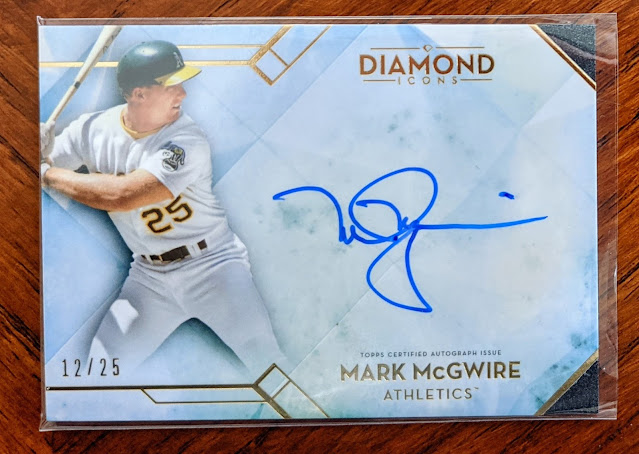 Looks pretty good! I probably should have taken it out of the penny sleeve before taking the photo, but with my luck, I would have instantly dropped it on the floor and done some bashing of my own to a corner. Taking it out of the top-loader was risky enough!

I had some patience waiting till a good one popped up that I'd be happy with. Definitely wanted it to feature an on-card signature. While I wouldn't have necessarily been against a bulked-up Cardinals era photo, I think I prefer him in an A's uniform. Pretty sure this is the first Diamond Icons card in my collection.. just another high-end Topps product line that means nothing to me, but whatever. It'll do fine. Not my first choice at a McGwire auto, but still very respectable.

And longtime readers know I'm crazy for cards numbered 12/25.. so if I'm gonna pony up for an auto of a guy whose cards aren't cheap, might as well try for a Christmas Card even if that means I might pay a little more than one with a higher print-run.

Bonus holiday unsubstantiated fact: Mark stole just twelve bases over the span of his 16-year career. The consensus is that he could have stolen many more, but he held back because he wanted his final total to stand at 12 to pair with his jersey number of 25. Yep, that's right, it was all in the name of representing 12/25! Now that's some serious commitment to yuletide cheer! Happy Holidays, Mr. McGwire! 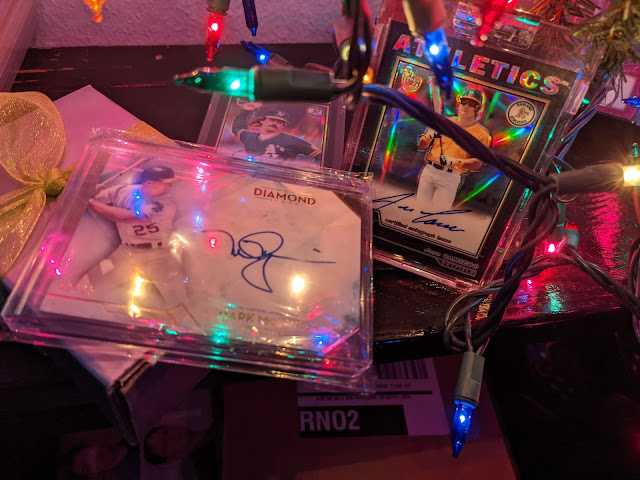 Have a great weekend, everybody! Stay safe and careful.
Posted by defgav at 4:00 PM