It's starting to feel like if you want to trade cards online anymore, you'd better carve out a few months to enter your collection into TCDB, because that's where the action is. Not counting occasional friendly blind packages/PWEs from buddies, working out "this for that" trades with fellow bloggers has pretty much died, at least for me. I had been getting discouraged by failed attempts to swap cardboard in recent weeks. One fellow blogger I reached out to said he'd get back to me but never did. And another guy just ignored me completely.. which left me a bit RAZzled because I thought we were buds.

But then in my darkest hour, a couple blogger trades came together in quick succession that helped brighten my outlook on the matter.

This first one is a biggie! The Diamond King found himself with a scare variation of a card he intended to buy thanks to a ditzy seller, and I was able to put together a strong trade offer for him. In fact, it might have been too good, because he was reluctant to agree to the deal because he thought I was giving up too much. That's refreshing! But I was able to assure him that most of what I was offering were dupes for me so I wouldn't really miss them. He offered to throw in a few more cards on his end and a deal was struck. 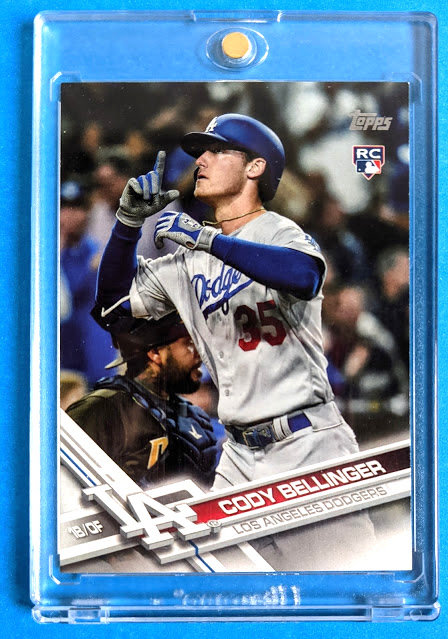 Bellinger RC! And this isn't just his rookie card.. and not just any old SP variation.. but the SSP variation! The "Pointing; Gray Jersey" Super Short Print, to be specific. It's a tough card to find.

My fan loyalty lies with the San Diego Padres, but as a baseball fan, I can still appreciate an exciting player like Cody Bellinger, stumbling into a few nice cards of the guy.. and this makes for an awesome jewel in my little CB PC. I hope he bounces back for a terrific season (as long as the Dodgers finish behind San Diego). 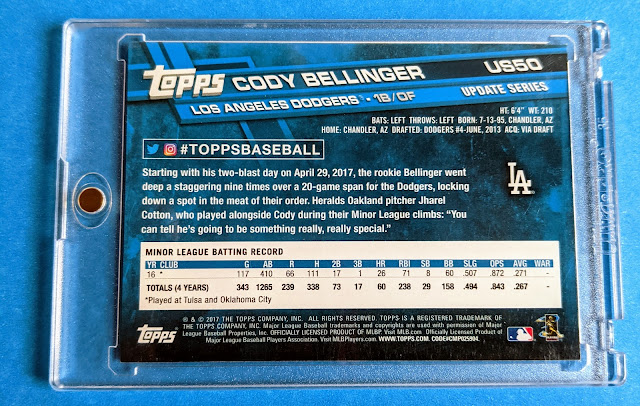 This would have been plenty in itself, but a few great bonus cards were along for ride... 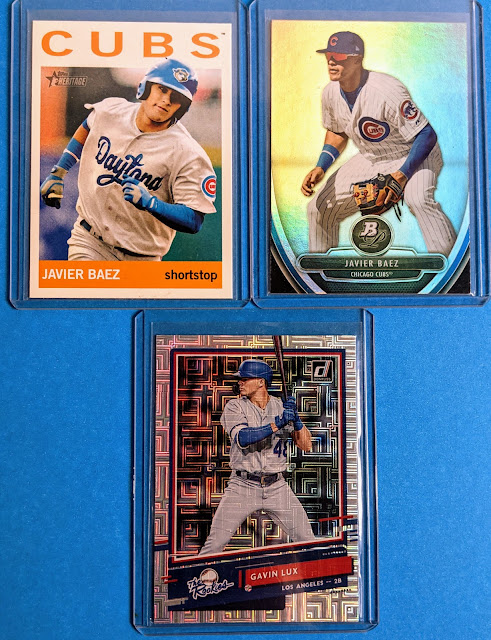 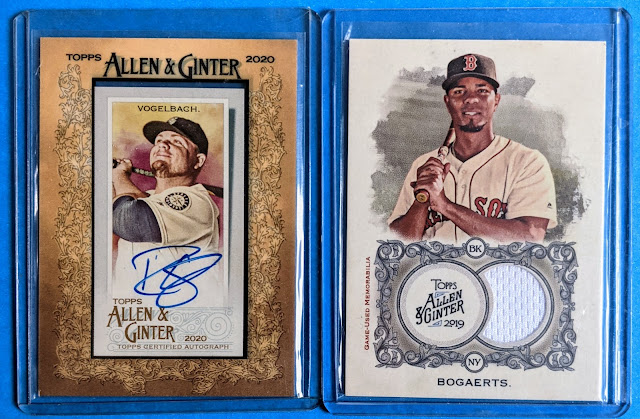 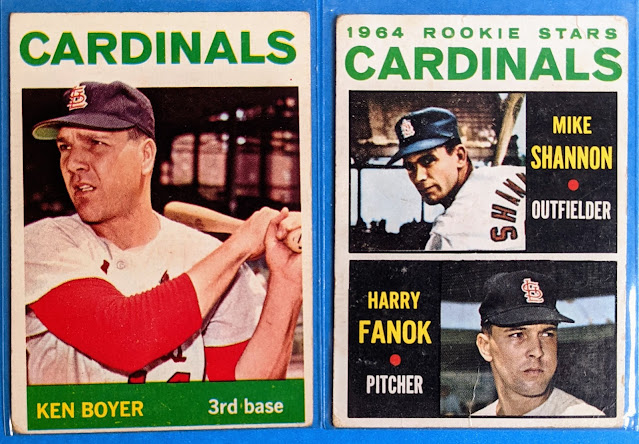 And a couple '64 Topps needs for my slow-going setbuild (begun Sep 2015, currently 75.7% complete).  Very appreciated! Ken Boyer was NL MVP that year and helped the Cardinals slay the Yankees that October. As for the rookie stars, Mike Shannon had a decent 9-year career with St. Louis, while Harry Fanok didn't have much success in the majors, but his nickname was "The Flame Thrower" and he has a very long SABR bio he co-wrote that I have no doubt is worth the read if one were to have the time.

That wraps up this big trade. I'll leave it to Kevin show off his side of the deal if he wants, but I think it was a strong offering including a vintage graded all-time great, early cards of some current hot names, and a hard-to-find insert featuring his top PC guy. I rarely sell cards, so I often wind up with solid cards haunting my tradeables until the right deal comes along. So this was a win-win for me. Cleared out some big dupes and landed an impressive return.

Thanks again for the trade, Kevin!

The other mailing to feature today is a PWE from hiflew over at the revived Cards from the Quarry blog. He's been offering up a bunch of good stuff in trade bait posts recently and I found 6 cards of PC guys of mine that caught my eye. According to my email archives, we had a prior trade way back in Feb 2014, so this second trade was way overdue! Honestly, I don't recall trading with a Rockies collector since then, so it wasn't too hard to find a few cards from his wantlist to offer him in exchange. 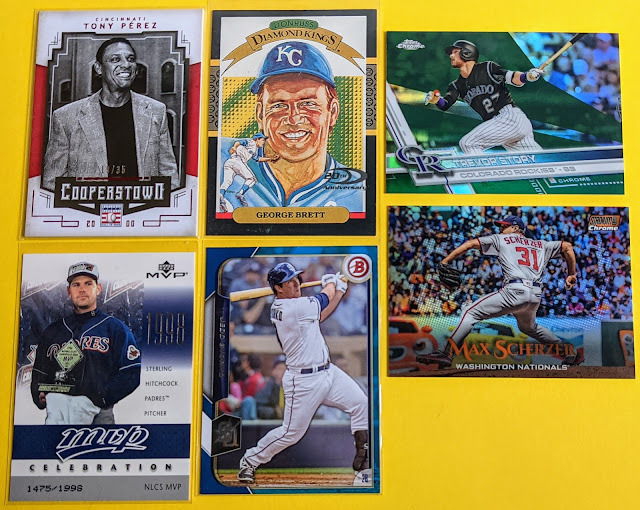 These are all serial-numbered, ranging from /35 (Tony Perez) to /1998 (Sterling Hitchcock). I think the horizontal refractors might be my favorite of the lot, though I also have a thing for 2015 Bowman parallels such as that blue Gyorko.

Good stuff. Thanks again, man! Hopefully there's not such a long gap between our next trade.