I got my own card!

Indie card publisher RRParks put out 3 series of Mystery Science Theater 3000 card sets via Kickstarter in recent years, then a "Series Four" earlier this year. The window for his licensing agreement had expired by that point, so the last series isn't technically a MST3K release, though it focuses on the old short films riffed on the show-- typically cheesy semi-educational shorts that are in the public domain so you don't have to worry about licensing.

The real allure of the 4th series for me was the special Fan Subset, where all us collectors of MST cards could get their own card created and included in the set by emailing in a picture and some text for the back. So that pushed me over the top to back the Kickstarter, and then what made it really cool is an "autograph exchange" was organized.. which I'll get to in a second. 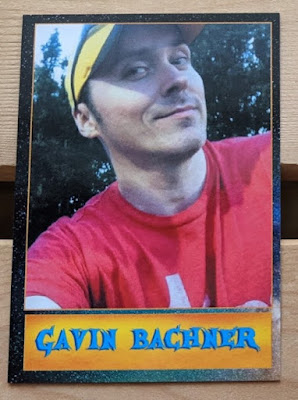 Here's my card. You might've gotten a sneak peek on Fuji's non-comeback post. I was originally leaning towards using the photo of me and Annie at the Goonies house sign, but feared the Goonies logo could make for a legal sticking point, as we were advised to steer clear of copyrighted crap.. but I probably could have gotten away with it. Oh well. I overthunk which photo to choose for a few days, and ultimately ended up with this selfie from a Portland Pickles game a few years back. Just a generic pic of me where I don't look too ugly, if maybe a little smug. I'm wearing a shirt with the old-school Topps logo, but you only see a bit of it. (My first "Topps card"?? lol) 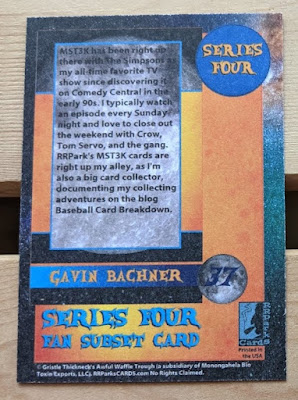 I'm card #37 in the set. The moon background makes it kinda tricky to read the text, but overall the backs are solid. Included with everything was a "glossy back / matte front" error card where the back text is easier to read. Funny how that works. I suppose being glossy keeps it sharp, whereas a matte finish might blur slightly.

See, here's the glossy back on the left plus a couple other printing errors Richard was cool enough to throw in.

The fan subset contains 115 cards. Of those, 85 signed up to do the autograph exchange, including myself. So that means I had to sign 85 of my own cards like a bigshot. lol. 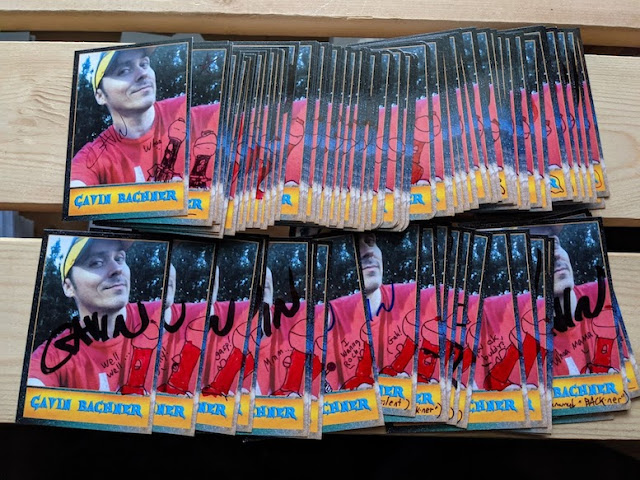 It took me about 2 weeks to sign them all, but that's because I doodled on each one, and occasionally made little alterations to mix things up. Some have rounded corners. Some have a red ink auto, some black. The sketch is MST3K's Tom Servo, and I tried to come up with something different for him to be saying on each card. This was back in February when I was "going through some shit" and this process of writing on the cards was sort of therapeutic. I tried to keep it light, though there may be some dark ones like Servo saying rude things to me, lol. Oh, and one card I'm "in drag", adding makeup to my photo... and one card I've been beat up, adding bloody scratches and a black eye. But other than those two, I don't think I messed with the photo much. But as I went along, I started incorporating the white parts from the Topps logo in my shirt to become part of the sketch (turning the white parts into Servo's shoulders). It kinda worked sometimes. And on some cards I noted the preferred pronunciation of my last name. Sometimes I traced my name because it made it look kinda cool. Stuff like that. I kept the stack of cards by my work(from home)station, and when I needed a break / procrastination activity, I'd write on a card or two. 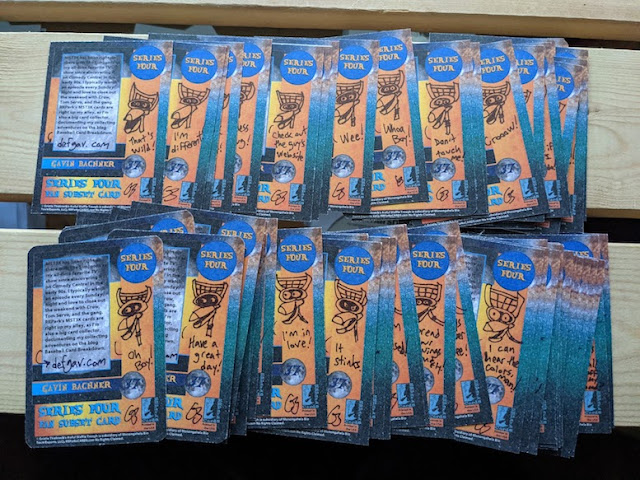 After I signed and doodled on all 85 fronts, I turned the stack over and then tackled the backs, doing a quick sketch of Crow in the available space. Yeah, it was a time-consuming choice, but it was fun and I bet a couple of the recipients probably got a kick out of the extra effort. Sometimes Crow is making a MST reference, or just a random quip that popped to mind. I also shared a link to my main hub defgav.com because it's quicker to write than "baseballcardbreakdown.blogspot.com" but the blog is linked on there, so who knows, maybe I'll pick up a new reader or two. Hey, IT COULD HAPPEN! :P

I believe all 115 fan subset subjects received something like 125 copies of their own card (in addition to the full 115-card fan subset). So after the 85 for the autograph exchange, I've got about 30 cards of mine left. So if you're one of my usual trade partners, don't be surprised to maybe find one thrown in among a future package of cards from me. If you actively want one-- like you've got a "blogger cards" minicollection or you're just a huge Baseball Card Breakdown fanboy-- feel free to let me know and I'll set one aside for you.

So anyways, yeah, very cool to have a real card of myself out there! I've made myself a custom or two over the years, but nothing as legit as this.

I should show off some of the other fan cards while I'm at it. 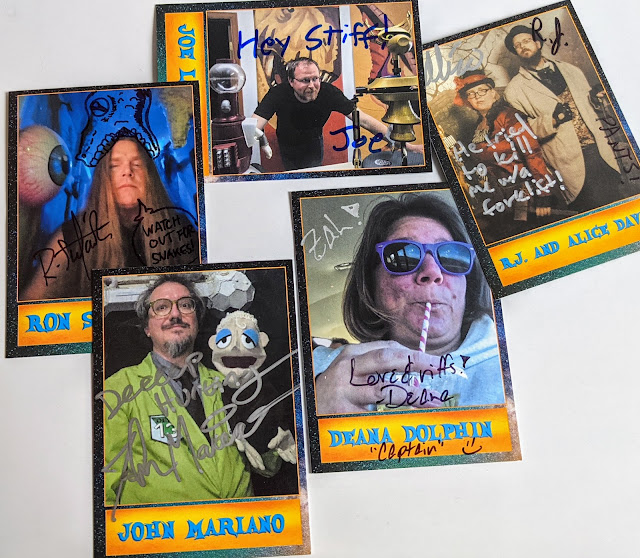 I wasn't the only one who did a little extra when signing the cards. Neat! The metallic ink looks good. I don't currently have any of those pens or I would have used one probably. 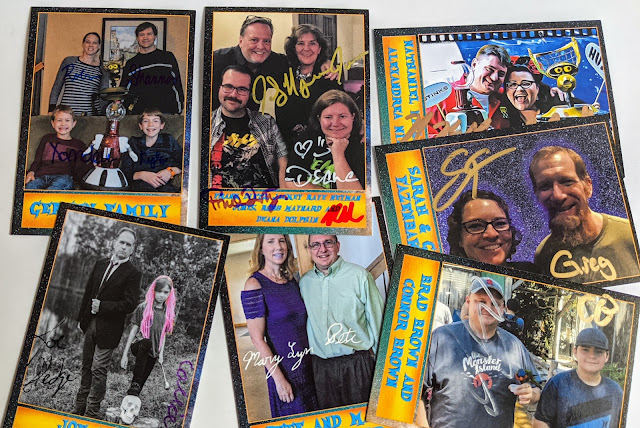 Several of the cards have multiple autographs.. love it! I had a couple dual autos in my collection before this.. but a 4x signed card is new for me! 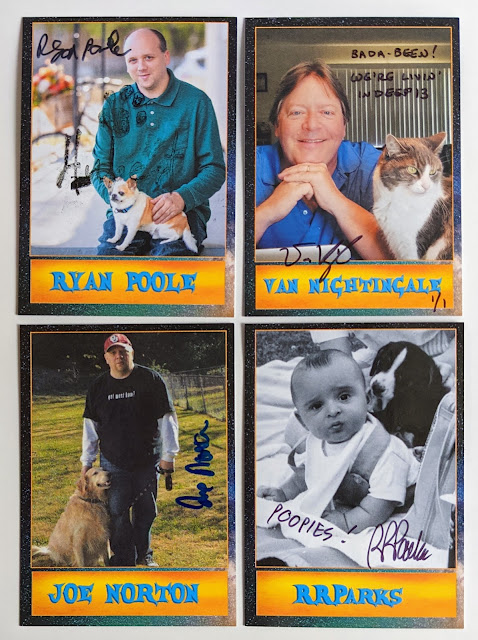 Some cute pets made it into the set. 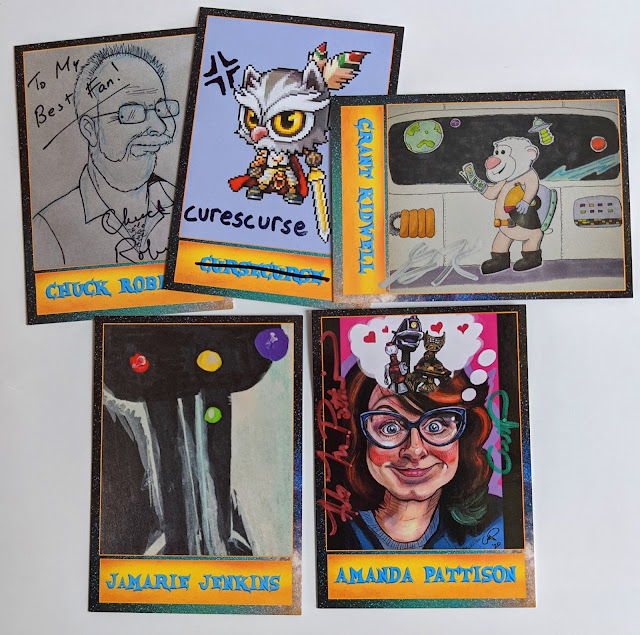 Some got artistic with their pictures. 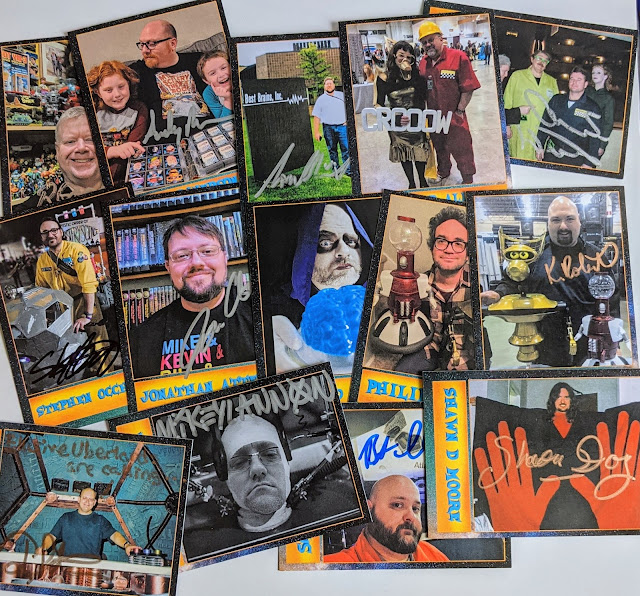 A lot of MST3K-themed photos, no surprise. 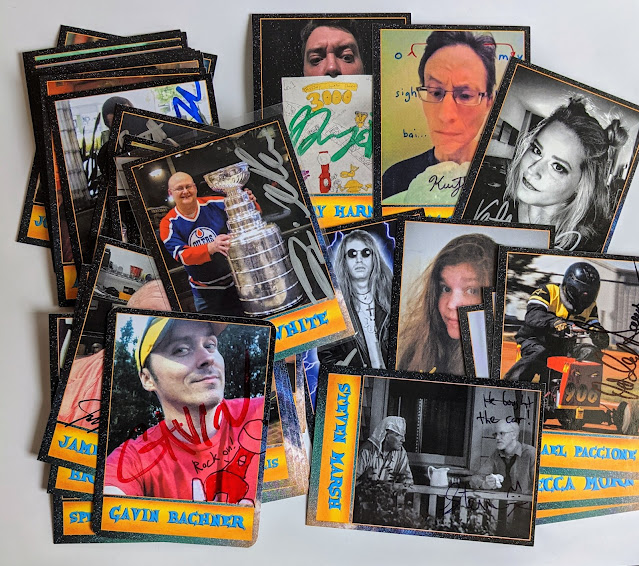 So that should give you a good overview of this fun Fan Subset. Got back one of my own from the autograph exchange. Rock on, indeed.

There's 72 signed fan cards here, with the remainder apparently being the non-US fans who are having their cards dealt with separately due to the slowness of international mail. Hopefully everything goes according to plan there and the import autographs are soon added to the gang here.

I still need to post about all the other MST cards I've gotten in the past several months-- the rest of Series Four's highlights, plus a very large amount of Series Three from early last year, and the MST-adjacent set for Manos: The Hands of Fate. Lots of great sketchcards and autographs among the cards there I need to get around to posting about one day.