Man, I'm really burned out on current baseball after all these big trade deadline deals. So let's retreat into the past with some vintage cards that never were.

I generally don't buy custom cards, but I've made an exception for the packs that WTHB has been putting out every month or two. Gio first offered physical packs of cards back in July of 2020. When the first pack arrived, I was kinda busy, so I just put it aside to open later. Then more packs would arrive, but I was busy packing up for moving, and the unopened packs just accumulated, waiting for a rainy day.

The latest pack features a "golden ticket"-type chance for a special 1/1 art card, and as far as I'm aware, the prize has yet to be claimed. Yep, looks like it's finally time to rip a year's worth of custom packs!

(Update: darn it, somebody else found the golden ticket. Oh well.
Also I'll just open a few packs for this post, then continue another day.) 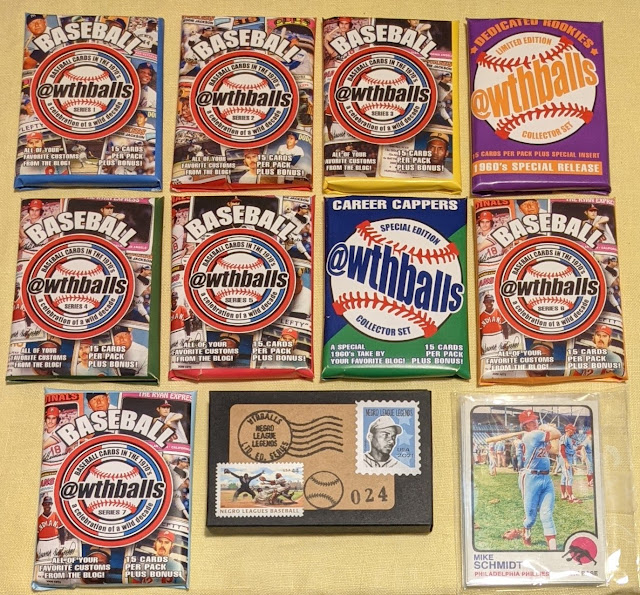 Sweet lot here prior to the break. 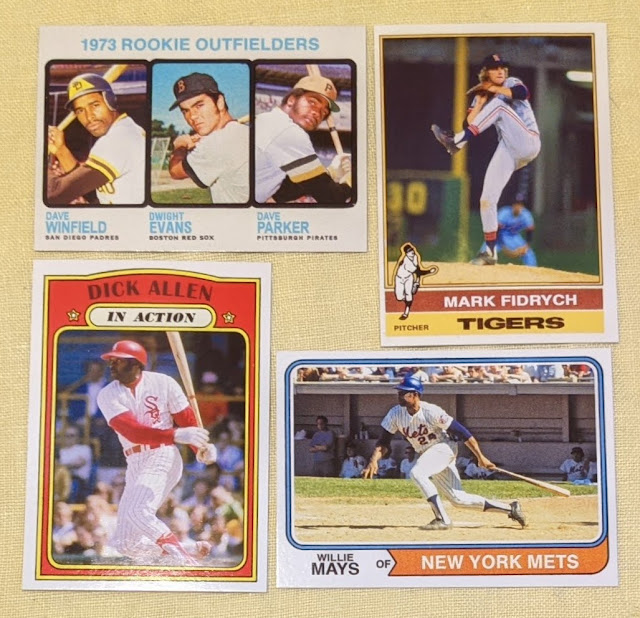 It was tough, but I narrowed down my favorites from pack 1 to these 4 cards. Coulda-been iconic cards! 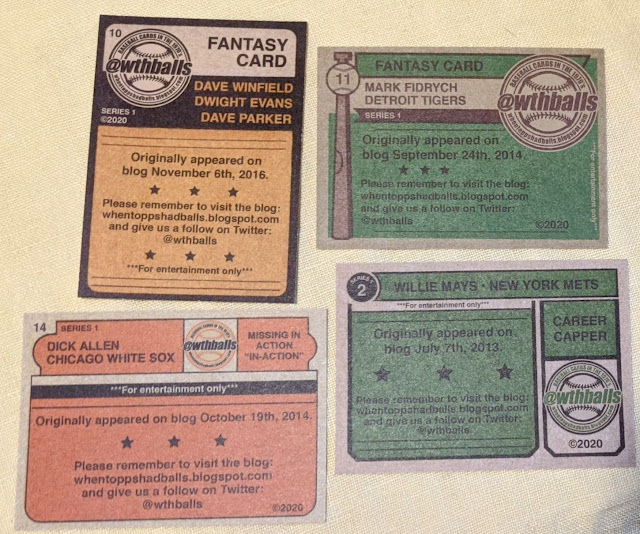 Wish Gio made full backs for these, though I know from experience that's very time-consuming and can't really blame him for coping out. At least the basic designs are there. I'm constantly fighting the urge to turn the cards over-- especially the "career cappers"-- to see the guy's stats, or maybe even a cartoon or factoid. But yeah, other that finding the backs a little disappointing, the cards are great, with the look and feel of real cards. He sends them out to a professional printer, so they're nicer than typical home-printed custom cards like what I used to make. 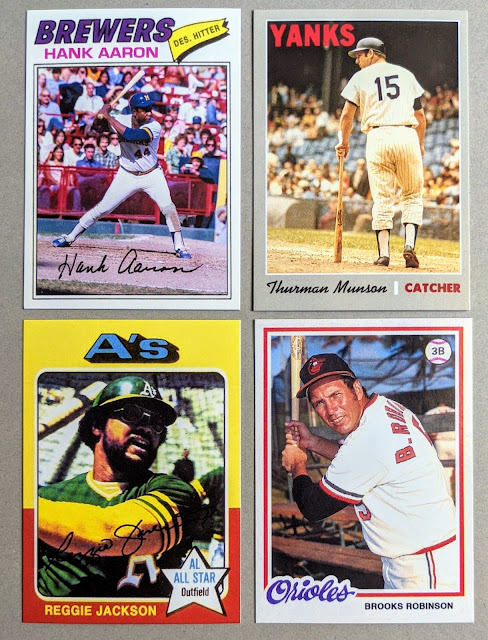 The second pack features what could have been an awesome Hank Aaron final tribute, Brooks too, and a card righting Topps' wrong of not acknowledging Reggie's rightful All-Star designation in 1975. 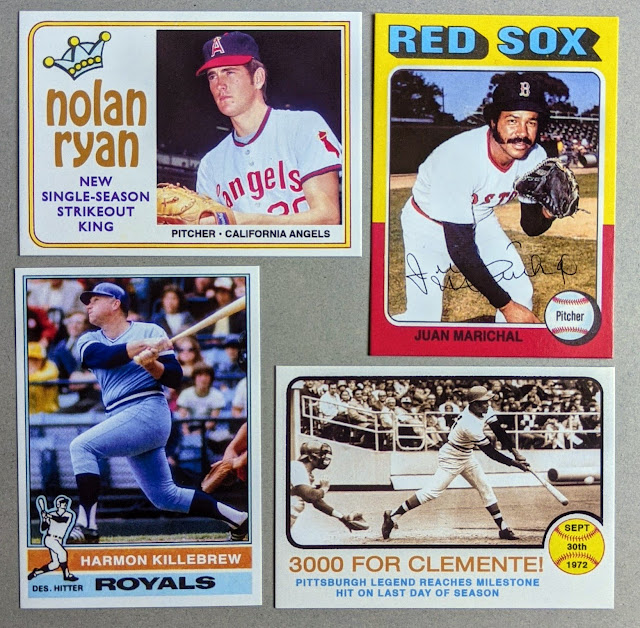 Pack 3 was so stacked, even my guy Bill Madlock couldn't crack my favorite top 4 cards. 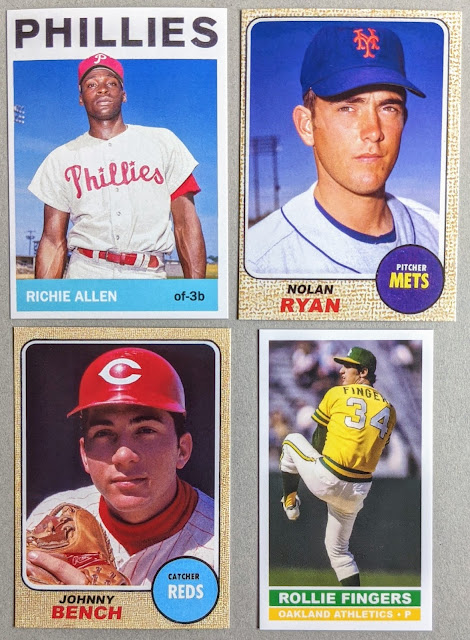 The 4th pack changes it up, leaving the 70s and going back to the 60s for nothing but dedicated rookie cards to guys who in reality appeared on multiplayer rookie cards. The Rollie is a "velvet-touch" insert, and while I was skeptical while reading about them, I admit it's got a great feel to it. If anybody has the Richie Allen velvety insert and isn't attached to it, I would really love the opportunity work out a trade. (I should clarify that each WTHB pack typically contains a complete series of 15 base cards plus 1 insert. Gio offered his customers a chance to buy a full set of these inserts, as he sometimes does, but I didn't bite.. and regret it in hindsight.)
Well, anyways, there's enough for today. Too much great stuff! I feel bad for not showing more of the cards but then I remember they've all been featured on his blog over the years, with the exception of the inserts, so I'm basically just "reprinting" his blog here.
Thanks for reading and have a great weekend. I'll leave you with a bunny photo from late the other night. 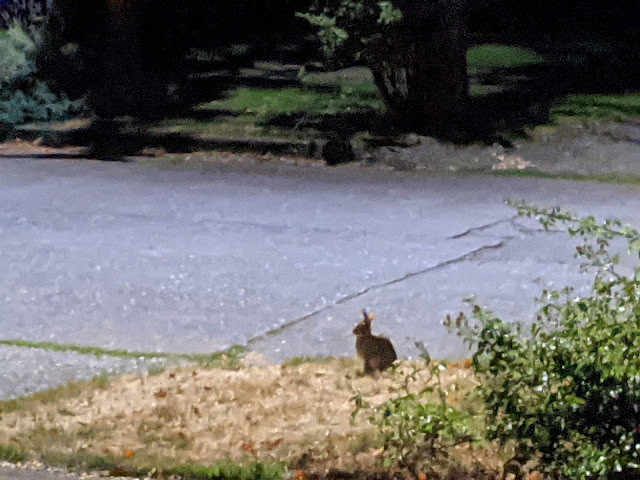