I've been meaning to crank out this post for a while, and I'll use his 70th birthday today recently as motivation. Rich "Goose" Gossage was among the most dominant relief pitchers of his era. He stuck around a long time and played for several teams, so he was a good candidate for my Vagabond Binder, which is basically a page per player, with that page featuring 9 cards of the player suited up for (ideally) 9 different teams. This is the 4th post in the series, following Rickey, Benito, and Canseco. 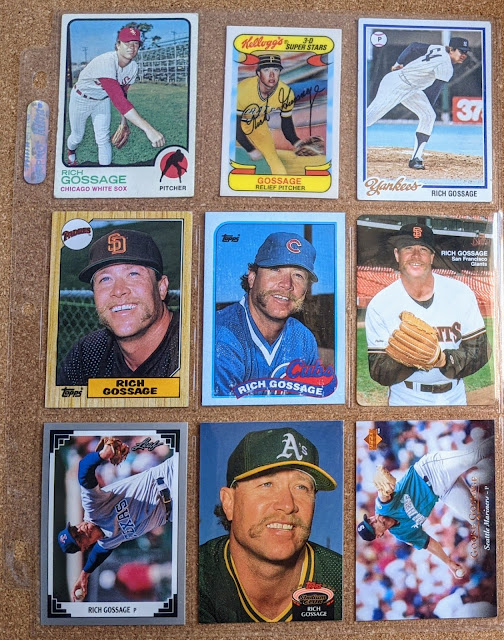 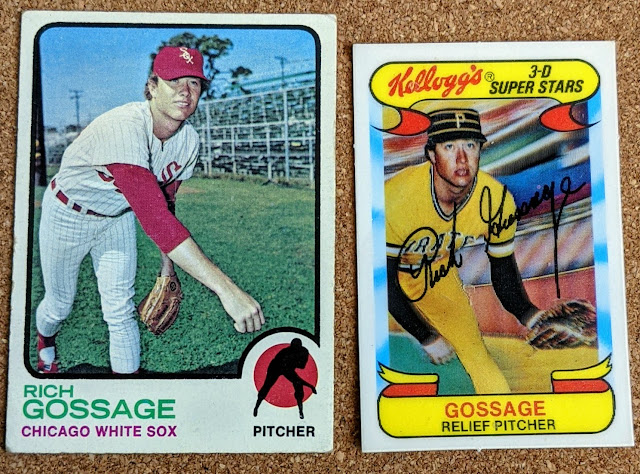 Rich came up with the White Sox in 1972, eventually having a breakout season in '75 when he lead the league in saves (26) to go with a 1.84 ERA. Chicago figured they'd try him as a starter for the '76 season, his lone year in the rotation. They traded him to Pittsburgh after the season and it was back to the bullpen in '77. I happened to have a spare '73 Topps RC to use for this project. Getting him pictured as a Pirate is tough, as your options are basically limited to his '77 Hostess card (where he's airbrushed into a Pittsburgh cap) and his '78 Kellogg's card, which I had to go out of my way to score another one of (already had one in my Kellogg's setbuild, but they're tougher to find than you might think). Technically, the card identifies him as a Yankee on the back, having signed as a free agent with New York prior to the 1978 season. 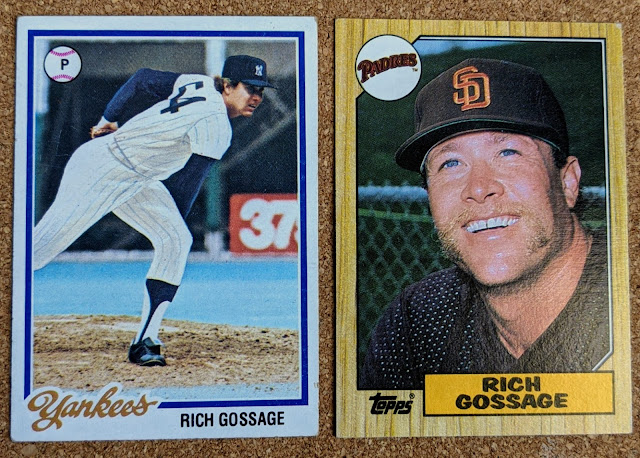 His 1978 Topps card is a silly one, putting the airbrush artist to the test changing a Pirates uniform into Yankee pinstripes. But it's what I went with based on the limited dupes from my Gossage PC (I try to use dupes for the Vagabond Binder when possible as opposed to picking up new cards for it). His successes in '78 included closing out the "Bucky Dent game" and 3 of New York's World Series victories over the Dodgers. It was the only ring he'd win in his career, though he did help San Diego win the pennant in 1984 after singing as a free agent once his Yankees contract was up. I had lots of options to choose from for his Padres card in the page, ultimately going with the big smile of his '87 Topps. 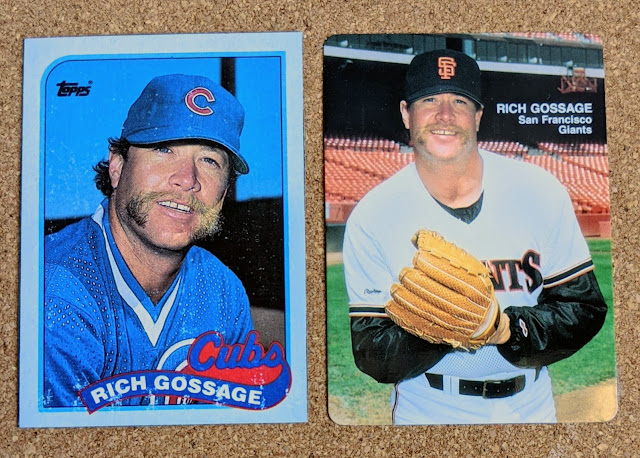 More smiles here. In a return to the Windy City, Goose was traded to the Cubs for the '88 season and eventually released in spring training of '89 before being picked up by the Giants. Tough finding him in a San Francisco uniform, with this Mother's Cookies card being your best bet. Neither of these are doubles for me, sacrificing them from the PC. But hell, I suppose the page in the Vagabond Binder is really just an extension of the PC, with some of the cards "on loan" for display, if you wanna look at it that way. (Taking cards out of sets/setbuilds is typically where I draw the line, though, hence buying that second '78 Kellogg's card.)
Goose returned to New York for the last couple months of the 1989 season, and so his 1990 baseball cards feature him as a Yankee. But he played in Japan that year-- there don't seem to be any cards documenting this overseas stint-- before finishing out the early 90s in the American League. 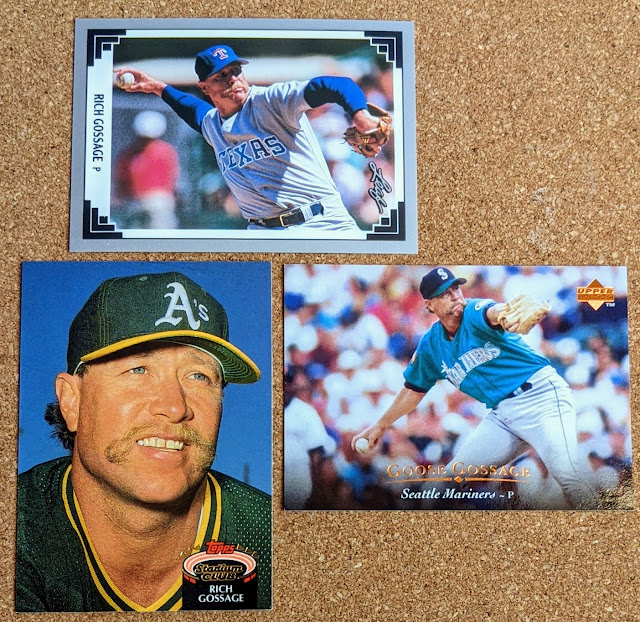 I try to stick to vertical cards for this project, but sometimes you gotta go horizontal. Now more of a set-up man than a closer, Rich pitched for the Rangers in 1991, Oakland in '92 and '93, before finishing his career with the Mariners in 1994. He was still a solid option out of the pen in his final year even at age 43, and were it not for the strike grinding things to a halt, he may have kept going a while longer. 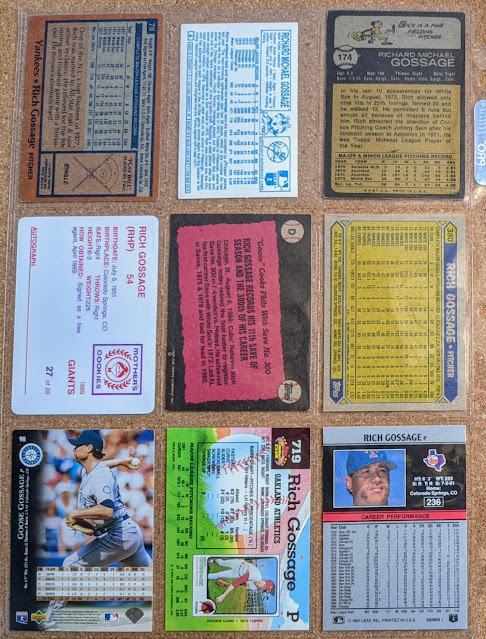 Here's the back of the page. The rookie card on the Stadium Club back really ties the lot together.

I don't currently have any more pages in the Vagabond Binder, though I've been meaning to see if I can rustle up a page using my Hoyt Wilhelm PC, so chances are that'll be the next post in this series.