I've been collecting Topps Retired since just before I started blogging, and I've recently unlocked the achievement of completing a trifecta of refractor autographs from each of the 3 Retired releases. 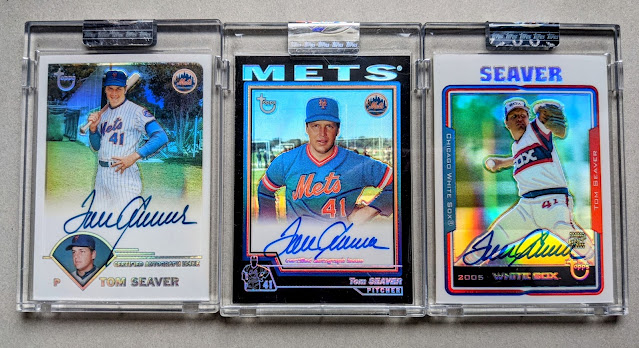 Tom Seaver refractors from 2003, 2004, and 2005 sure look nice together. If only they could have shown him with Cincinnati for '04, it could have kinda visually recapped his career in cardform, but that's a minor complaint.

I should note that while this is the first time I've owned a refractor auto from all 3 Retired sets of one guy at one time, I have in my life had all 3 Robin Yount ref autos. A few years ago I got a good deal on a Yount '03 Retired refractor that I soon turned around and sold for a hefty profit to a guy working on the set (also sold him my Willie Mays from the same set for twice what I paid, and then later a Fred Lynn). At the time I already had an '04 Yount refractor, and not long thereafter I also got an '05 refractor, but didn't have all 3 at the same time. I've since grown a little more serious about collecting 2003 Retired refractors (and 2005... in addition to 2004 which has always been my #1), so I probably wouldn't make that same deal today. It's not a huge regret of mine, though I do hope to someday land another '03 Yount refractor (and Mays and Lynn). [I wonder how that guy's set is coming along.]

If you're curious, these are the players have autos in all 3 releases of Topps Retired Signature Edition:

I've got at least 1 Retired refractor from all these guys (2004, where I'm only missing Trammell [who isn't in '05]). Several of them I've got 2 of the 3, with '03 usually being the elusive one. Seems that set is a little more popular, with its clean design and dual photos, reminiscent of 1983 Topps. (Though really it's just a white-bordered remix of the blue 2003 Topps flagship design.)

But back to Tom Seaver, the 2005 was the last one I needed, and the only one I haven't shown off on the blog before, so let's take a closer look: 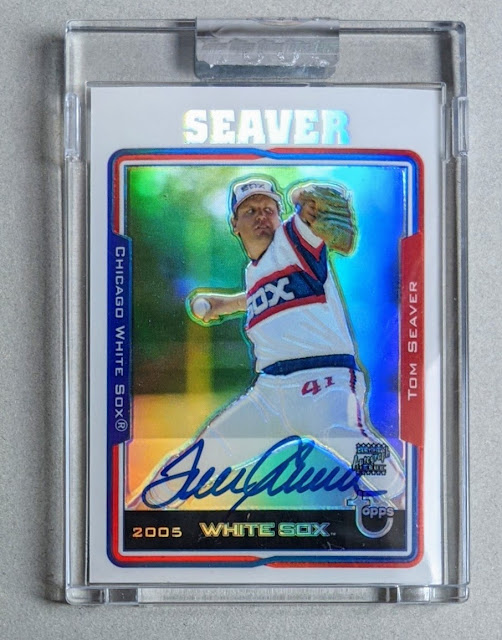 Those White Sox unis from the 80s are something else, eh? By the time Seaver got to Chicago, he wasn't quite the dominant ace of his younger days, but still a dependable starter. Compiled 17 complete games over that 2 and a half year span and picked up his 300th win with the club.
This card had been overpriced on eBay for a while. I added it to my watchlist to keep an eye on it, and eventually the seller sent out one of those private offers for like half off which brought it down to a fair price and I'd pulled the trigger.
Full disclosure, its original case was scratched up and missing the hologram sticker seal, but I soon found myself with a good "donor" case to swap Tom into. I realize this could be frowned upon if I was intending to sell it.. like I'm "altering" it or whatever. But again, I'm not planning on selling it, I just like my Retired autos to have uniformity. And new collectors today really only care about graded cards, so whoever gets this card next will very possibly decide to send it in for grading, meaning it'd get busted out of the case anyways to be put into the grading company's slab. The card itself has been sheltered from the harsh world, only being outside of a Topps "uncirculated" hard case for a brief moment during the transfer. 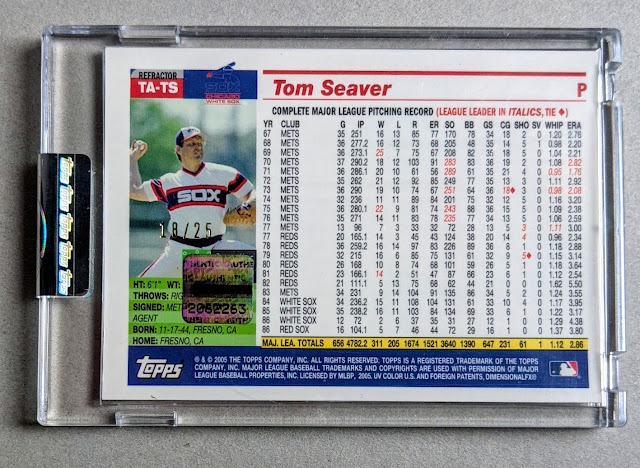 One of the greats!