I got a kick out of the Night Owl Cards post from last month titled Ego trip. Not only was it the high quality blogging that Greg's known for, but also there was a cool little easter egg in there for me. See, he was talking about his latest article to be published in Beckett, one showing off highlights from his impressive Dodgers collection, and a custom card I made for him made it in there. 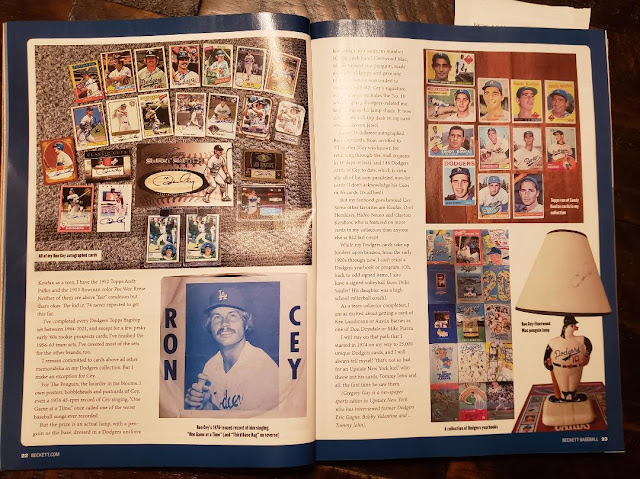 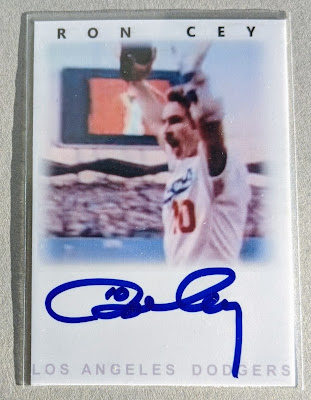 I printed 3 of these cards that Ron Cey was nice enough to sign and return through the mail. I surprised Night Owl with one, traded one to Stealing Home Oscar, and kept the above for myself. Not my best custom or anything, but I like the celebratory image even if it's not very sharp.

The iconic June 1990 Beckett with football/baseball Bo Jackson photo was the first one I bought as a kid. I feel like that transaction pinpoints the moment I officially became a full-fledged baseball card collector. "Alright, let's get serious about this stuff!" 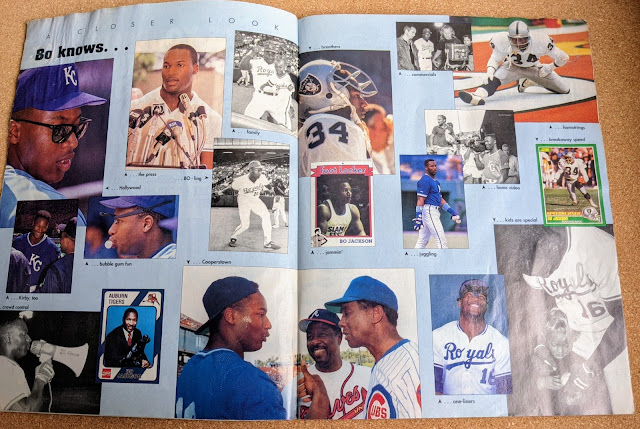 This copy of the magazine is actually my second, picked up later. The original got cut up. I remember I had this 2-page Bo Jackson collage taped up in the little "card room" area of my bedroom. 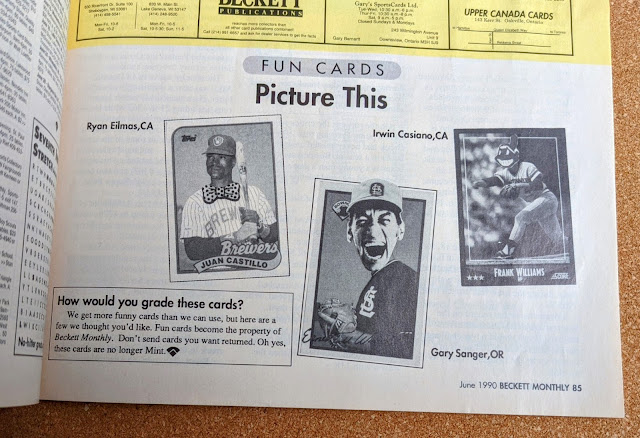 (Ernest P. Worrell on a Todd Worrell card, lol!) I made a few "fun cards" like this back then, though never got around to mailing anything in for publication consideration.
I don't think I ever ponied up for a subscription, but seems like I would buy the new Beckett from the local card shop every month for the next 3 years, eventually cooling on the hobby for other teenage interests around mid 1993. 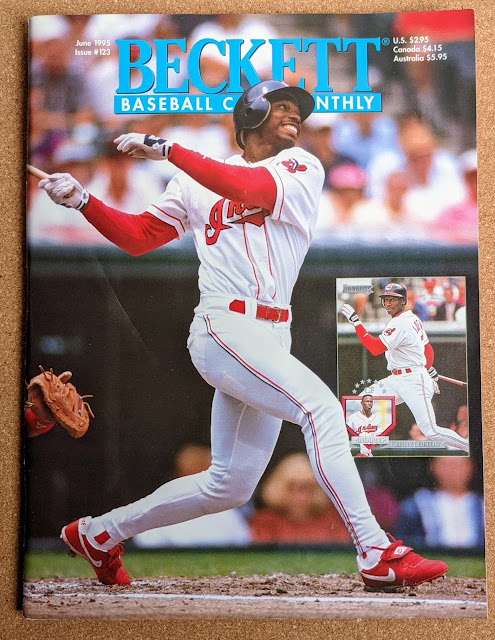 Jump a couple more years, and I ended up in a bookstore or something in 1995 and decided to buy a Beckett for old time's sake and take a curious check-in on the hobby and the prices for some of my inactive collection. I got rid of most of my old Becketts over the years, but saved this Kenny Lofton since it was the most recent one I owned and therefore had the most accurate price guide. (LOL)
So anyways, very cool for me to kinda sneak into Beckett, even if just in a tiny way. Me from 1990 got his mind blown, for sure.
Now let's hit a few incoming cards I've been meaning to post about. Not many (ungraded) Topps baseball cards from 1990 sell for more than a buck each these days, but I've got a few to show off.

I love these "Kmart greenies" as I call them. The quirky blue gloves and fat trophy are just awesome. 1990 Topps Batting Leaders.. basically inserts only available through special Kmart rack-packs of '90 Topps. They're pretty rare, as far as Topps cards from 1990 go. The red ones from 1989 are ever rarer, but I prefer the green. Found an eBay seller with these 3 big names for a good price.

Little easter egg I noticed with these is that they're numbered by rank on the active career batting leaders (going into the 1990 season). So like, Boggs' .352 batting average earned him the #1 spot on the checklist, with Gwynn's .332 placing second (though Tony would pass Wade later in the decade, which I must point out as a Padres fan). I now have 6 of the 22 total Kmart greenies. Completing the set isn't a priority at the moment, but I'd at least like to keep an eye out for the rest of the guys I collect if I can find them for a decent price.
It's a sentimental "twofer" for me, being from the year I started collecting, plus I worked at Kmart for a year in high school. 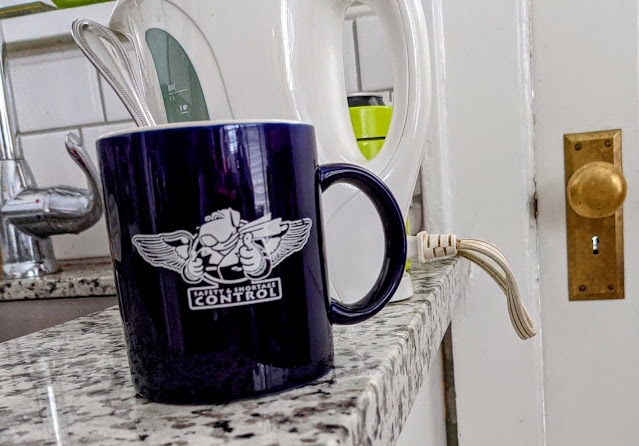 I still have/use the mug I got the time I made employee of the month! Reads "Safety & Shortage Control" and pictures a dog giving double thumbs-up. I think it also came with $50 store credit or something like that. I wasn't collecting at the time, and I don't recall cards sold at the Kmart I worked, so that store credit didn't go to cards. But this was circa 1995, so hey, maybe I bought that Kenny Lofton Beckett with it? We had a pretty decent magazine selection; could have carried Beckett then. 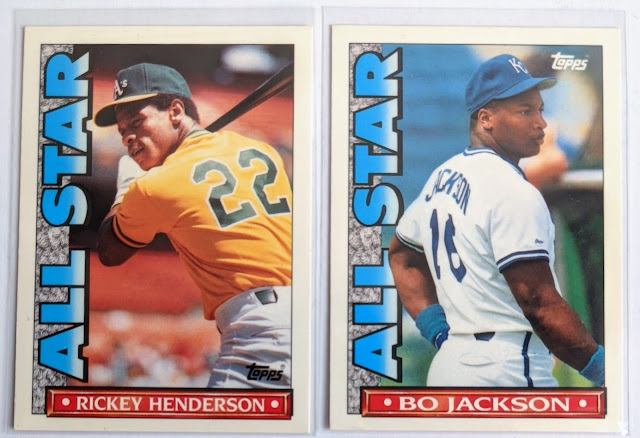 More Topps cards from 1990 that manage to rise above the "junk" classification of the era. The same seller I got the 3 greenies from also had this pair (1990 Topps TV Glossy All-Star Set) cheap with combined shipping, so I added them to the order. 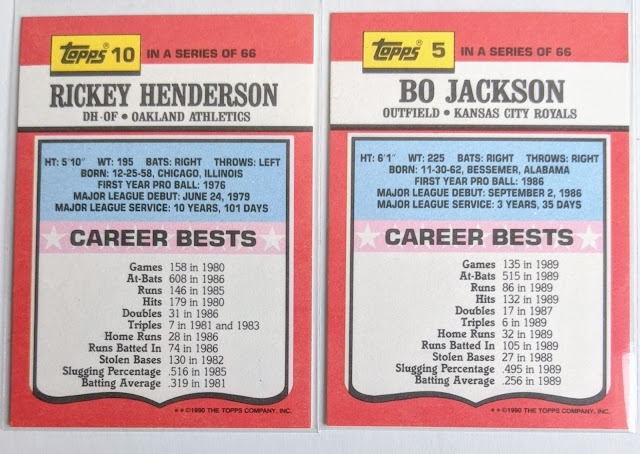 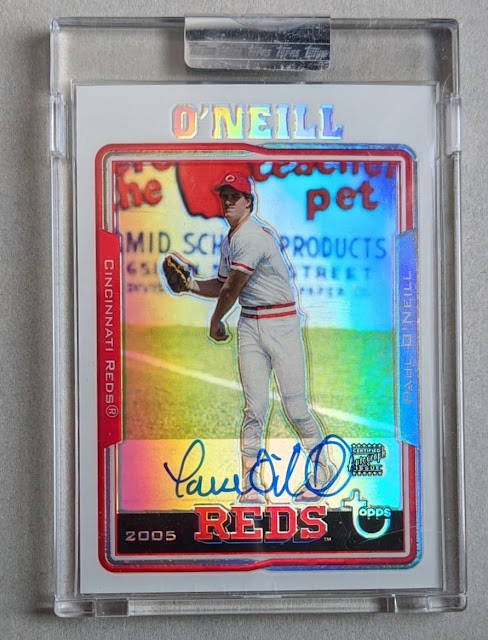 Paul O'Neill is better remembered as a Yankee, but cool to see him pictured with the Reds from the first half of his career. Teacher supply store billboard in the background gives the card some extra character. 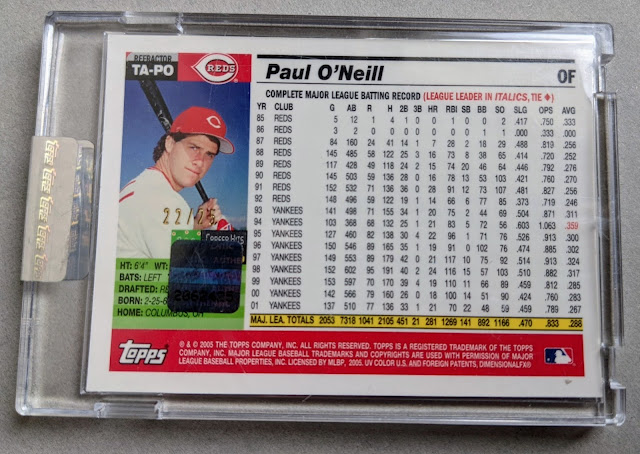 Part of the Reds team that won the World Series in 1990, keeping with the loose theme of the post. And who did Cincinnati vanquish that October to claim their title?
... 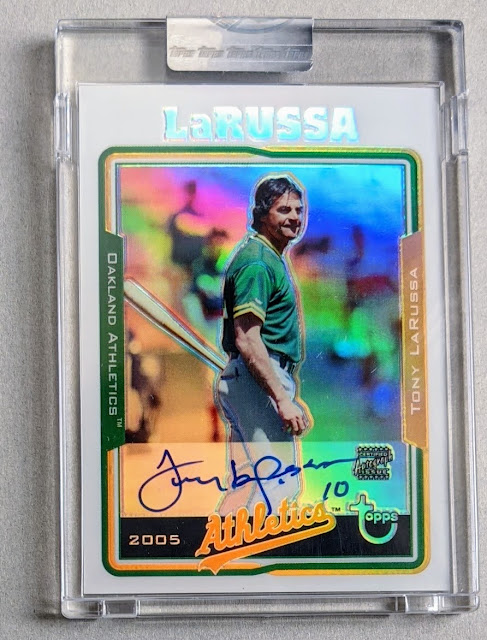 Tony LaRussa lead the A's on an impressive run back then. Nice photo of the skipper helping out with defensive drills. 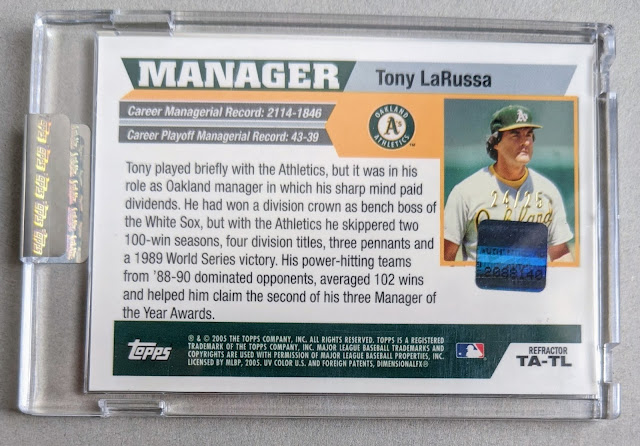 But really though, Mrg. LaRussa didn't really have any business in a set called 2005 Topps Retired Signature Edition. He was still active at the time, not retired. The year after this card came out, he won the World Series with the Cardinals. Crazy that he's active again now, keeping the White Sox in the thick of the pennant race this year. I can't think of any other cards in the three-year run of Topps Retired where the career stats on the back advanced after the card was made. (Bob Brenly has a 2005 Retired card, though 2004 was his last year of managing, so he came close. Brian Cashman got a card in 2005 Retired despite being an active front office person. I guess Topps Non-Active Player Signature Edition wasn't quite as catchy. Oh wait, I found another Retired card with old career stats: Grady Little was in 2005 Retired and then went on to manage the Dodgers for the 2006 and 2007 seasons. Oh, and one more: Jimmy Leyland has a 2005 Retired card and then managed the Tigers from 2006 through 2013.) 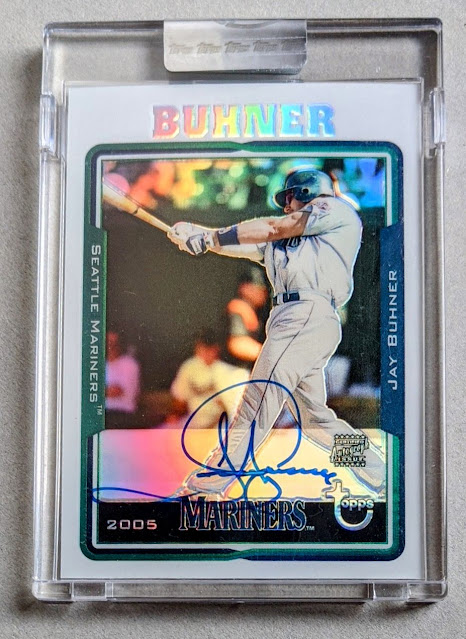 Jay Buhner closes out today's trio of recent pickups. A bigtime Buhner collector was liquidating some PC cards and actually had two of these refractors. I called dibs on this one because it had a more pleasing signature-- just enjoy it for a moment; beautiful, right?!-- and another buyer snagged the other, less beautiful one a little while later. 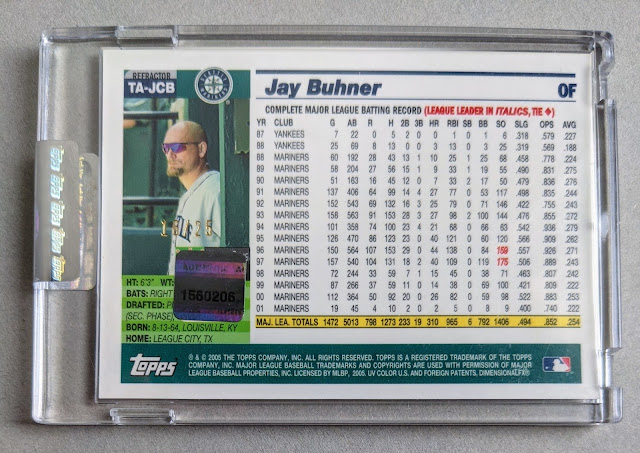 Fine career for Junior's bash brother in Seattle and cause of consternation for Frank Costanza.
That'll do it for this time. Thanks for reading!
Posted by defgav at 6:41 PM

Email ThisBlogThis!Share to TwitterShare to FacebookShare to Pinterest
Labels: 2005 Topps Retired, Sentimental Sundays, The spirit of 1990 is alive in Portland, Topps Retired Triad