I think I've identified a "ghost whale"... you know, a white whale that might not actually exist.

Regular readers know I'm nuts for the Topps Retired product line. And Kirby Puckett is one of my favorite guys to collect, so his autograph in 2003 Topps Retired has been a holy grail of mine for a while now.

But I'm beginning to suspect that the card doesn't exist, and hopefully this post (and reader response) can help settle it. 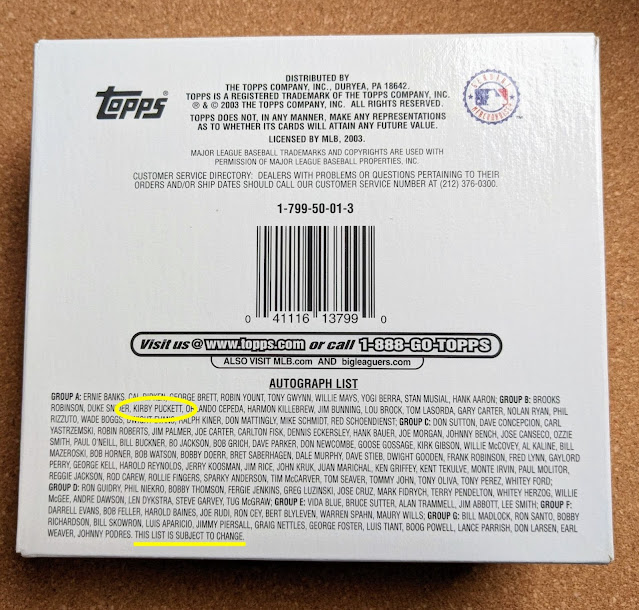 To start at the beginning, Topps Retired Signature Edition debuted in 2003 and Kirby Puckett was listed as an autograph signer in the marketing materials and even on the bottom of the hobby box (above), though key to note is "this list is subject to change" small print attached. He was among the Group B odds group (Group A being the toughest pulls, and Group G being the most common), with a stated print run of 75 base Kirby autographs and 25 serial-numbered refractor parallels. This is common info provided on card checklist sites like TCDB, Beckett, and baseballcardpedia.. So according to that, there should be a total of (100) '03 Retired Kirby autos out there. 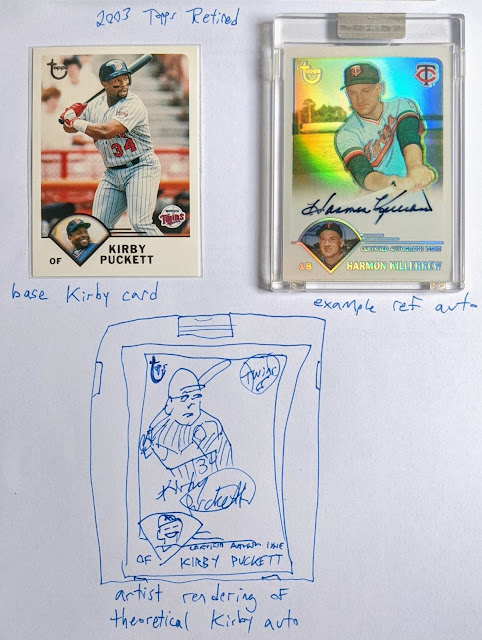 Sadly, Mr. Puckett died on March 6, 2006 after years of failing health, though he has other on-card certified autographs through 2004 on the market, so it's certainly possible he signed '03 Retired cards.

I've been watching Retired autographs on eBay for nearly a decade at this point. I think it's safe to say I've seen all other autograph subjects from the product for sale-- some I may not have seen the refractor yet [all numbered to 25 or less], but I've at least seen the base available once or twice over the years. In fact, there's currently a seller with "complete" autograph sets from all 3 years of Retired on eBay. His listing for 2003 Retired has an asking price of $30,000 OBO, beyond the realm of possibility for me to think about, but still a helpful resource. I poured over the photos in the listing-- the lot is highlighted by a slabbed Hank Aaron refractor (all other cards in the lot are base autos)-- but Kirby is nowhere to be seen.
The base (non-auto) set of '03 Retired is 110 cards deep. Of that checklist, only two players don't have corresponding autographs included: Dave Concepcion and Johnny Sain (with Kirby possibly being the 3rd). I gotta assume these guys were slated to have autos in there, but just didn't return their signed cards to Topps in time to be packed out (and there were no redemptions in the product, as far as I'm aware). Concepcion, like Kirby, is listed on the box bottom (in Group C), making Johnny Sain the only player in the set without his name on the original autograph list. But Concepcion, unlike Kirby, isn't included by checklist sites in the autograph listing for the product. So Topps knew it wasn't getting those Sain cards back for whatever reason, but was holding out hope for Kirby and Concepcion. And eventually Topps gave up on Dave Concepcion (ostensibly leaving him off updated marketing materials that were used by the checklist sites), but the Kirby question remains.
TCDB lists 0 collectors with either '03 Retired Kirby auto marked as being in their collection (though plenty have them on their wantlists). And none for sale (or "sold out") on COMC.
I even checked the PSA population report for 2003 Retired autos, and no one has sent in a Kirby auto for grading. You'd figure at least one of the 100 cards would have been submitted.
I've done Google searches, tried digging into historical eBay listings, and still have found no sign that a 2003 Topps Retired certified autograph of Kirby Puckett exists.
So with all that layed out, what do you think? I'm interested in hearing your take on the matter, especially if there are any Kirby Puckett supercollectors reading this who may've already gone down this rabbit hole themselves.

Does anybody have this card, or could at least share documented proof that it's out there beyond a text checklist?

Please let me know. Thanks!