A flat-rate box and a PWE

A couple incoming trades to recap.

First is a nice flat-rate box from Johnny's Trading Spot. I've traded with him a bunch in the past, but it had been a while. (I'm at the point where my recent past is split by when we moved into our house, and this is the first post-move trade with John.) 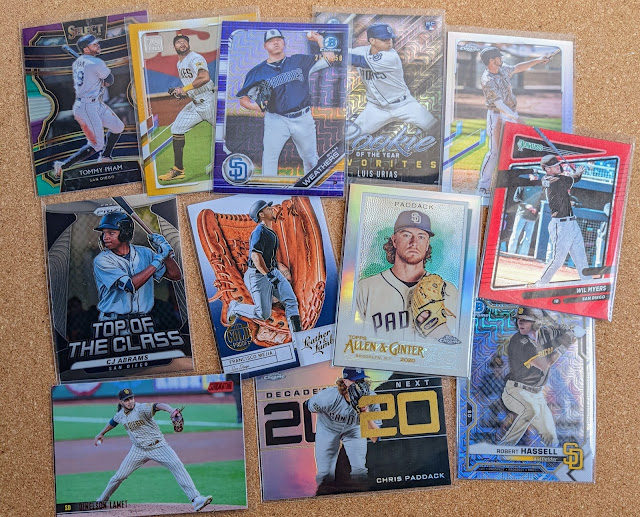 Out of the few hundred cards included in the box, most were Padres, and while I'm not a true team collector, I was able to find plenty of keepers among them. Lots of shiny modern stuff in here. 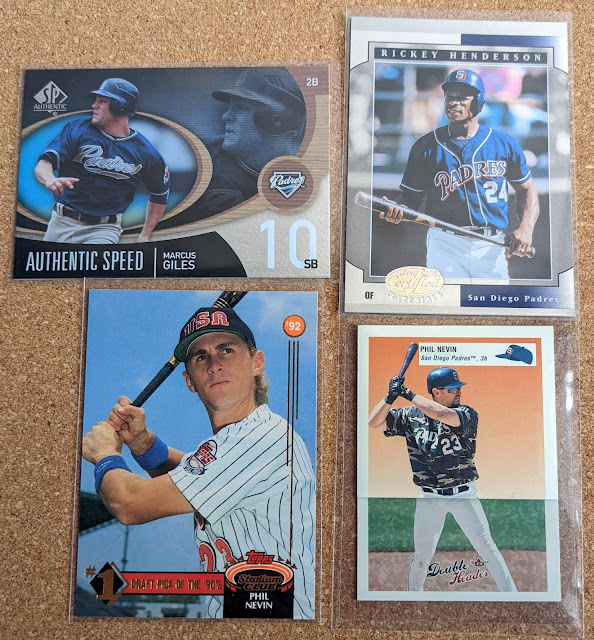 And some older PC fodder. 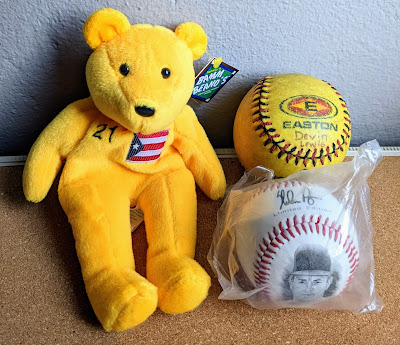 John had space in the box to toss in some bric-a-brac. Like I say on my wantlist page, I try to keep my collection cards-only but make exceptions for my top PC guys. Roberto Clemente definitely fits the bill, so this Bamm Beano's #21 bear becomes one of the odder oddballs in the Clemente PC. (It's the 2nd stuffed animal in my card collection.. also got a David "Boomer" Wells bamm beano around somewhere, so now the two can play together when the moon is full and no one is watching.) 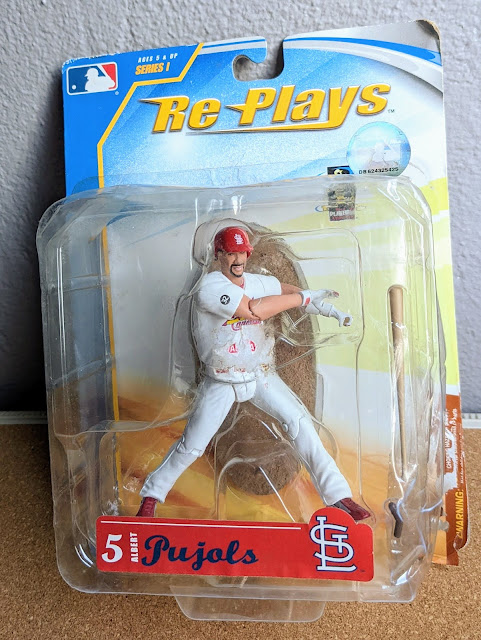 I've got a few scattered baseball figures in my collection, but think this is the first Re-Plays toy I've seen. Since the packaging isn't in great shape, I'll likely open it up and play around with Albert a bit unless someone wants to talk me out of it. 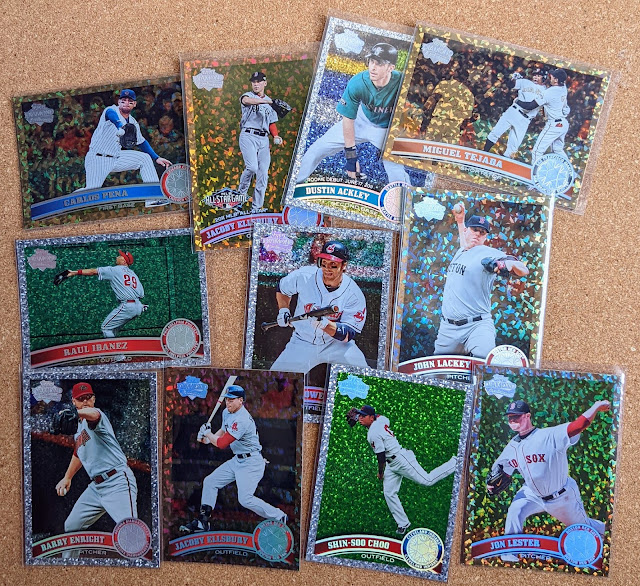 John hasn't forgotten my fondness for sparkly 2011 Topps parallels. I've got over 700 unique entries in this setbuild, but I'm still only at around 55% complete (flagship/Update/Chrome). It's a project that's sort of in limbo.. no longer a collecting focus, but I can't bring myself to blow it up. I don't have any expectation of ever completing it, but who knows, maybe one day in the future I'll decide to hit it hard and give it a whole-assed run (already got the Trout, after all). But for now, I'm just happy to receive some in trade from time to time. It's one of the few setbuilds that I kinda try to log the source of each card I get. So I can tell you that John has already sent me some of these exact same cards years ago, lol! But some solid needs, too, with a few Hall of Very Good candidates here. 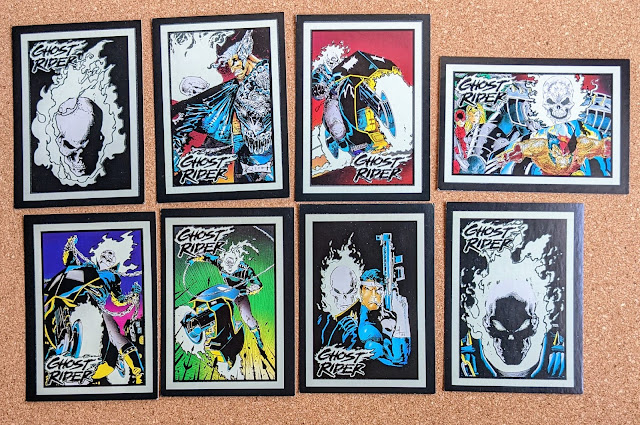 Very cool to find a near-complete set of glow-in-the-dark '92 Ghost Rider cards in the box. While I have the 10-card set already, a couple of the cards were taken out of the binder for the framed display I put together, so these cards from John allow me to re-complete the set in the binder. And my glowing dupes all get bindered too. Every glow-in-the-dark card is a little miracle and deserves respect! 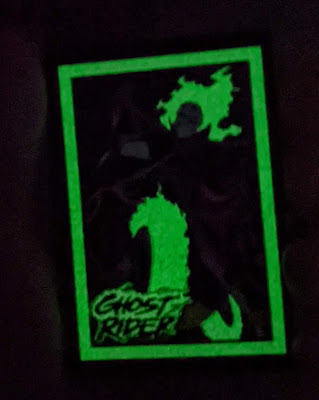 But the real highlight of the box was this factory set of 1988 Score. I love early Score with their insightful essays about each player on the back. In fact, I'd like to get a second set of '88 Score so I can keep one tight and intact, and have another set to slowly meander through, reading every card and splitting the set up between keepers (yep, I'm still missing lots of "junk" in my PCs) and non-keepers.
(Everybody, if you have any complete [or almost-complete] overproduction-era baseball sets available that you'd like to trim from your collection, feel free to casually feel out a trade with me! No set is too "worthless" for my interest [except '91 Upper Deck because I already have 2 of them] and I will of course be sure to consider your postage cost with regards to my return offer for you. I'd much rather trade-for than buy.)
Big thanks for the trade, John! Your return package is all packed up and I'll be heading out to the post office with it as soon as I publish this post.
-o-
And now a quick PWE from gcrl. He took me up on my offer to send a Dick Allen '72 Dodgers "proof" custom for any 1972 Topps need of mine. 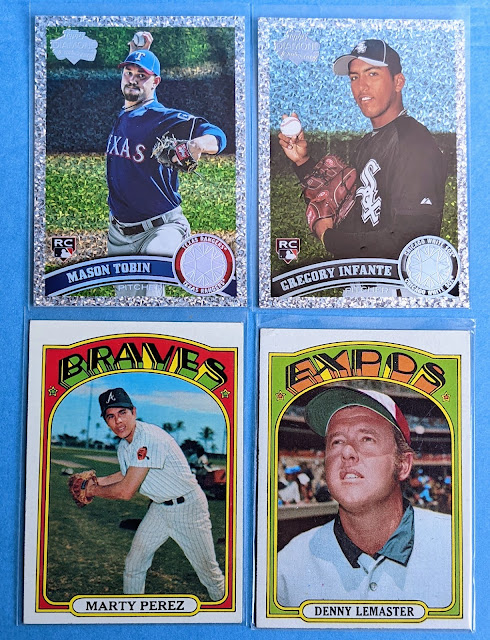 Not just one, but a pair of '72 needs, plus a couple surprise 2011 Topps parallels for that lumbering build of mine.
Thanks, gcrl! I mailed out a return PWE to you earlier this week, so that should arrive soon if it hasn't yet.

Thanks for reading and have a great holiday weekend, all.