A nice birthday gift from my wife this past December was getting the parts needed to get my desktop computer back up and running. That's where I do nearly all my custom-card work, and attempts to do so elsewhere just make me feel like I've got my dominant hand tied behind my back. So after the big move and a year and half of basically being sidelined from making customs, I've finally returned to messing around in Photoshop. It's been a blast creating cards again, and you readers can expect the blog to once again be peppered with customs going forward, likely resulting in an uptick of posting.

And here's the first output from my custom comeback. This one is actually more of a "reproduction" than a straight custom. Keith Olbermann, the celebrity baseball card insider and media personality, recently shared a photo of a couple proof cards from 1972 Topps that were changed before the set went to press. 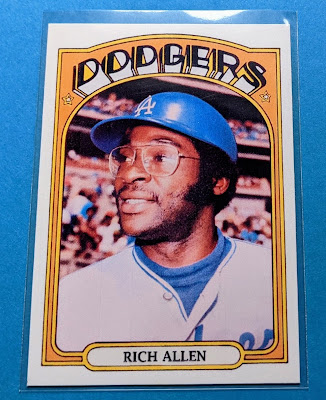 Dick Allen is one of my top PC guys, so my eyes perked up when I saw the original proof for his 1972 Topps card featuring a terrific headshot with the Dodgers. I just had to whip up one for myself! Sure, it's not as cool as a real proof card, but I'm still very happy to have this card-that-should-have-been represented in my collection in some way. 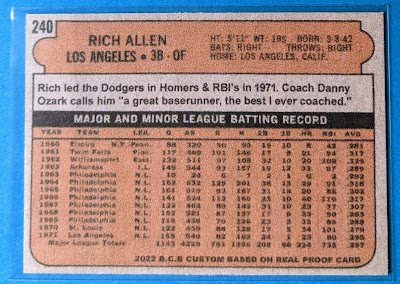 The original proof is most likely blank-backed, but making a blanked-back card is against my nature, so I slightly tweaked the back of his actual '72 Topps card for my custom's back. The real write-up has a second sentence about the December 2, 1971 trade to the White Sox that I took out and replaced with a quote from Dodgers 3rd base coach Danny Ozark (who would manager Dick during his return to Philadelphia a few years later.) 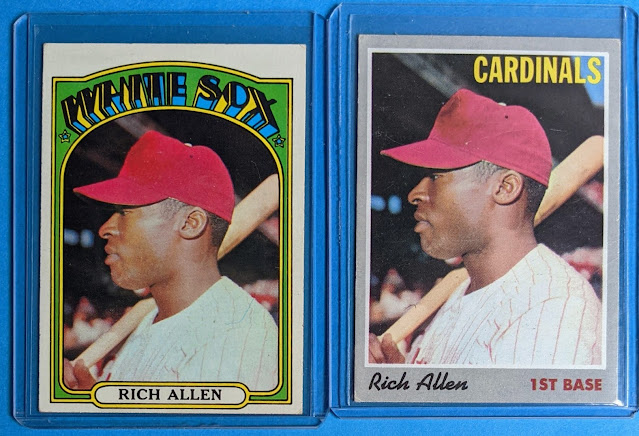 Sadly, Topps was bent on being "current" as far as team designation, and clumsily shoehorned him into a "White Sox uniform" for 1972 by way of an old photo that had already been used to deceive collectors in 1970 into believing his Phillies colors were close enough to a Cardinals uniform. I wish they would have just bumped him into a later series and used a spring training photo, but nope, Series 2 (of 6). Topps rarely used profile portraits like this, so it was extra awkward the few times that they did. (..as if putting that pic on a card once wasn't bad enough, but twice!) I think the shot was originally used way back in 1965 for his embossed insert in that year's Topps set (the one place where profile pics work fine, since it's basically like a coin image). Those embossed cards are known for featuring less-than-impressive likenesses, so it's tough to say the face is a match, but the back of his head, ear and neck all fit the reused photo 100% if you ask me. And it's obviously not a spring training photo, so it must've been taken no later than his ROY-winning season of '64.
Here, look: I made a gif (Yep, new gifs will also be making a comeback on my blog and Twitter account now that I'm getting back into the graphic design groove.)

So when Dick Allen was putting up triple-crown numbers in the South Side of Chicago at age 30 during his MVP season of '72, his bubblegum card being pulled from packs featured a (bad) photo of him as a 22-year old. Weak, Topps! 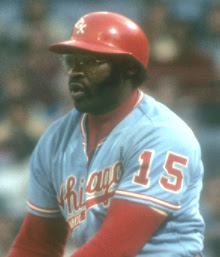 Here's what he really looked like in '72. Mustache, big sideburns, and eyeglasses. Looks more like the dad of the man pictured on his 1972 Topps card, LOL. And he had been wearing a batting helmet exclusively (never a cap) since the late 60s after experiences with fans in Philadelphia throwing things at him during games. So even the fact that he's pictured simply wearing a cap on his 1970 and 1972 baseball cards is wrong.
Old photos in 1968/1969 Topps are somewhat forgivable under the circumstances-- Marvin Miller trying to get the players better compensated, instructing them not to work with Topps until a better deal was struck-- but that was all worked out by the 70s. No excuse other than laziness and stupidity.
Poor guy. First Topps does him dirty during his playing days-- bad, recycled photos... and not having the decency to call him by his preferred name (a la Clemente).. also snubbing him twice at the end of his career when he should have been included in their sets-- And then he falls one vote short of the Hall, not once but then a second time (posthumously, thanks to covid).. Ouch! Nobody ever said life was fair, I guess. Oh well, I still enjoy collecting his cards, even if he continues to become more of a "tragic figure" as the slights continue to pile on. Heck, I've got solid PCs of Rod Beck and Ken Caminiti.. even Barry Bonds and Pete Rose. But those guys made poor choices; Dick wasn't to blame for most of the guff he got.
I got that Danny Ozark quote on the back of the custom from Dick's SABR bio. Kinda heartbreaking to learn that Dick grew up a Dodgers fan ("Putting on a Dodger uniform is something special for me," he was quoted as saying at the time. "My family, we used to go to Forbes Field in Pittsburgh every time the Dodgers would come there. And we lived 30 miles away.") and then they traded him away after just one year, apparently because he wasn't into all the off-the-field PR activities that owner Walter O’Malley expected of his squad, while Dick just wanted to focus on winning ball games. Similarly, while they loved him in the St. Louis stands and clubhouse, the Cardinals' front office felt differently and shipped him off after one year, too. (Let's not forget Allen's trade from Philly to St. Louis was the very consequential "Curt Flood trade" that helped bring about free agency in baseball.) You gotta think that Dick's career would be remembered better today if he hadn't bounced around as much; a minor ding that has narrowly managed to keep him out of the Hall, perhaps. 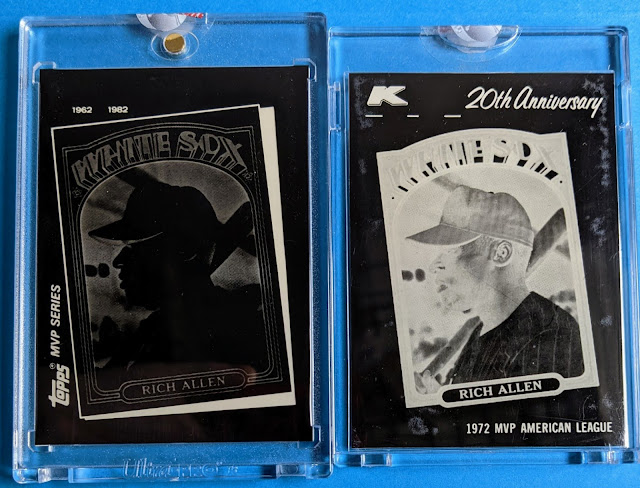 As I mentioned, Dick Allen was AL MVP in 1972, so his unfortunate '72 Topps card got some added significance to it that wasn't there when the card was first being pulled from packs. Later the card would be used in the 1975 Topps subset for past MVPs, as well as the 1982 Kmart MVP Series-- a card for which I've got a couple mask negatives from the Topps Vault used in the manufacturing (I think that's the magenta mask on the left, yellow on the right). I like these B&W versions more than the actual card (Kmart or '72 Topps), not just for the rarity, but also because the color scheme fits the White Sox better, lol. 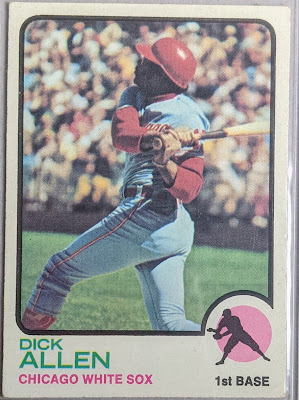 At least Topps got a good photo of the reigning MVP the next year (and finally started calling him by his preferred first name). It's the only time during Dick's career that Topps pictured him at the plate. I would have liked to see a better look at his face, but Topps probably worried the drastic change in his appearance between his '72 and '73 baseball cards would cause kids' heads to explode, so they kindly eased card collectors of the early '70s into the reality of the situation, lol. (Funny enough, 1972 was the only year of his prime that Dick didn't get a Kellogg's card. Yep, the one year he wins MVP, his Topps card sucks and Kellogg's leaves him off the checklist completely! Wow) But yeah, 1973 Topps is arguably his nicest looking card. Well, actually no... The big All-Star Rookie trophy on his 1965 Topps card helps make that one tough to beat. And his 1971 Topps card is pretty great too. It's a high number, otherwise it might be better known. It features a photo of Dick actually wearing a Dodgers uniform, no deception from Topps this time (Well, the back photo is a different story!), taken before the '71 season, perhaps even before spring training. You might be distracted by the photographer's knee, but note the dead grass on the field and an otherwise lifeless Dodger Stadium. That trade took place October 5, 1970. In fact, I suspect Topps or the photographer artificially made the sky bluer in the photo than it was that day. That would explain the weird outline around his shoulders. It was likely a dreary winter day but they wanted to make it look like spring or summer. 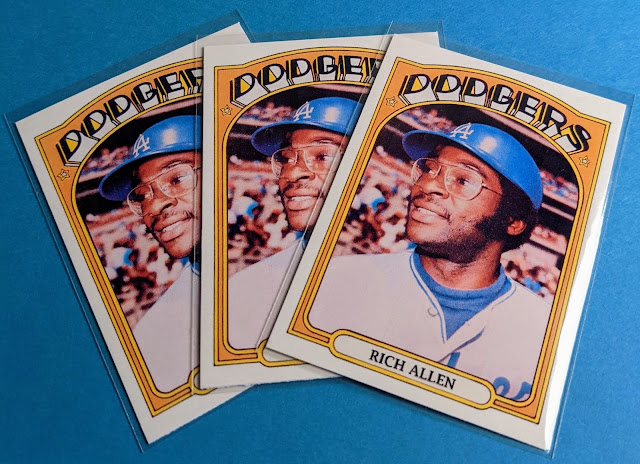 Anywho, I printed a few extras of my '72 custom in case anybody wanted to trade for a copy. On the topic of 1972 Topps, I'm still fittingly at 72% complete with my setbuild and would really love to complete it by the end of this year. Hey, it's the set's 50th anniversary, after all. Only 217 cards left for me to track down (mostly those damn high numbers). I'll trade you a copy of my '72 Dick Dodger custom for any 1972 Topps card I need-- not upgrade, please, but need. (unless we're talking about a star player or high number, in which case I'd happily extend the offer to "wanted upgrades", too). (Link to my 1972 Topps needs spreadsheet). Just let me know if you've got any of those needs and want to trade. (Not for sale, btw, only trading for '72 needs.)

Wow, this post was originally supposed to be like, "Hey, I made a Dick Allen custom"-- short and sweet-- but I guess this became a "deep dive" into that reused photo.

That's it for today, but more customs and a flat-rate box recap from John Miller are on the horizon. Thanks for reading.