Time to look at another offering of glow-in-the-dark trading cards.

Did you know there were some pre-war glow-in-the-dark tobacco cards from overseas? Yep! I'll feature those on the blog soon.

I could be mistaken, but as far as I'm aware, there were no glowing trading cards after those '38 tobacco cards until 54 years later, when this 10-card insert set for Ghost Rider came out in '92.

There were a lot of gimmicks in the early 90s, and the comic book industry always seemed to be a step ahead of the sports card industry with funky stuff like this-- shiny/refractors, die-cut, clear, glow-in-the-dark, etc.. all appeared on comic book covers before baseball cards, as far as I can tell.

Back to this set, it's called 1992 Comic Images Ghost Rider II (I assume the "II" is to differentiate itself from the 1990 Comic Images Ghost Rider release, a set that's much harder to find). The 1992 release has a base set of 80 cards, and one insert set: Glow in the Dark, which came one per pack. I picked up the 10-card set on eBay a while back for a few bucks.

The cards feature a glowing border, plus all the "flame" areas (around his skull and tires) also glow. Perhaps they could have done a bit more to make the pictures look cooler in the dark, such as outlining the rest of the action, but again, this was an early use of glow-in-the-dark technology on cards, so they get a pass. Still two big thumbs-up from me on these.

I never really got too much into Ghost Rider, even during my dip into comic book collecting in the early 90s, but I still thought he was pretty badass. How could you not?! He's a frickin' chain-wielding dude on a motorcycle with a flaming skull for a head! 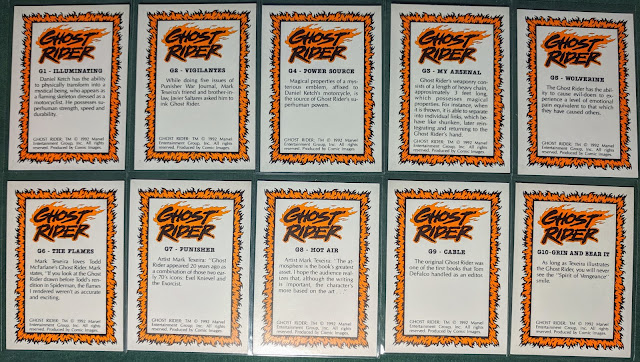 The backs each have a little write-up. Punisher and Cable make cameos. Funny how there's an artist named Mark Texeira... not to be confused with former baseball player Mark Teixeira.

Other glow-in-the-dark trading cards featuring comic book characters would follow in the mid 90s and into the early 00s. More on these later.
Thanks for reading.
Posted by defgav at 4:32 PM