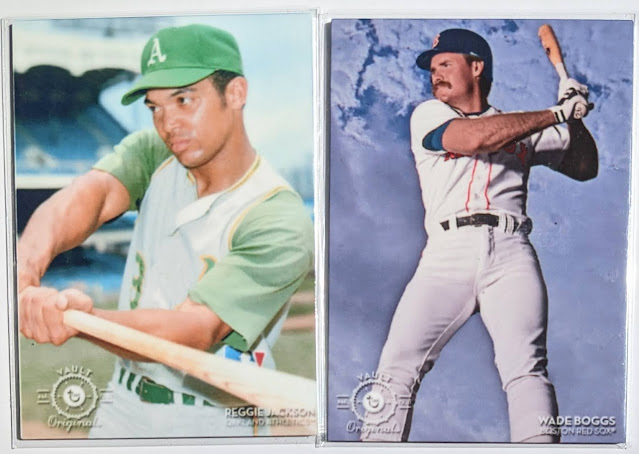 Let's start with a pair of Vault Metals inserts from 2016 Topps Legacies of Baseball. These metal cards ingots got on my radar when I pulled the Mike Trout 1/1 (black logo) from a birthday box which would stand my best pull ever if not for the 1/1 Griffey auto I pulled from a box of Archives once. But yeah, these things are kinda neat and I'll sometimes pick up dudes I collect if the price is right, but even the base (white logo) are numbered /135. Both photos flashback to flagship cards of the past. In fact, let me take a moment to go dig up the original offerings out of the PCs for a side-by-side comparison... 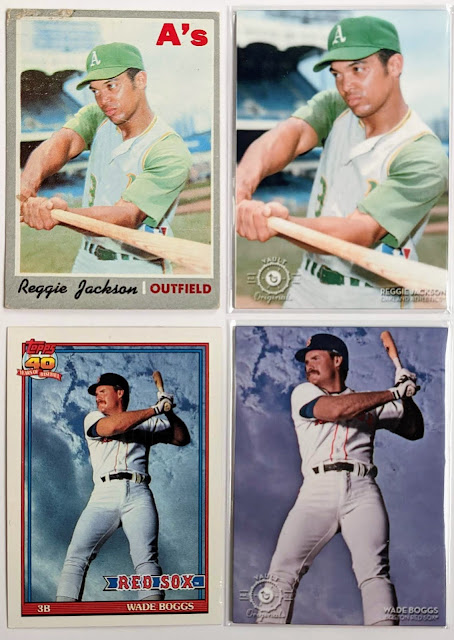 The "Legacies of Metal" cards are a bit blurry (text too), with the originals being clearer images, perhaps due to the process of printing on metal? They're fun to have in-hand if for nothing else than the novelty of a material not very plentiful in a typical card collection.
..Of course that tactile aspect is pretty much lost when these cards get slabbed, but I did snag one that happened to be graded.. 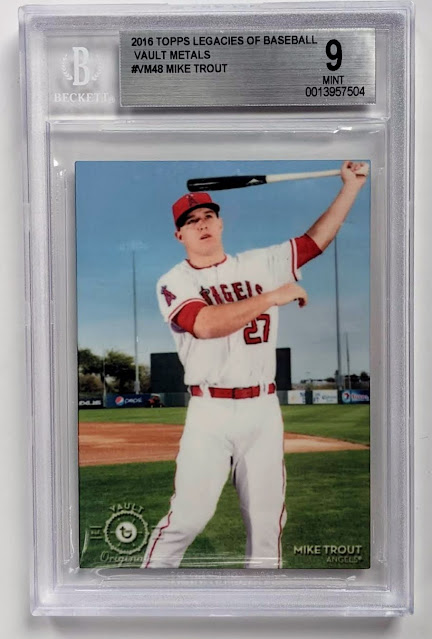 This was from eBay, not COMC, but as long as I'm talking about these metal card, figured I'd feature this Trout. It's the base version I picked up a while back, with the thinking I should try for the rainbow since I already got the 1/1. Turns out there are 4 varieties total, now missing just the purple (/50) and red (/5). Those five-in-existence red parallels Topps likes to put out are usually pretty tough to find, much less find reasonably priced (and I'm a little late to the search at this point), so this goal might not ever come to fruition, but it would be cool for me to be able to say I've completed a Mike Trout rainbow. And throw in the fact that'd it'd be a metal rainbow, and that just adds to the uniqueness. Like, there are a ton of Mike Trout collectors out there, and I'm sure several have completed a rainbow of his... but a metal rainbow? That'd be quite the niche accomplishment. Maybe someday.
Moving on, here are 3 more random cards I bought on COMC:

I had been wanting Dave Stieb's O-Pee-Chee rookie card since that YouTube doc a few months back raised my appreciation of him and his career. This one is a bit off-center and has extra rough edges, though still proved to be the most expensive card in this order. But oh well, good enough for me to check off my list and takes the PC to a satisfactory "good enough" state in my mind, though I'm sure I'll continue to add to it here and there, but now I'll probably stick to his "dimebox" type cards.
I don't really search out Jake Peavy cards these days despite having a soft-spot for the Cy-winning Friar, but I just kinda dig those vintage stock parallels, particularly from 2010 ("Target Retro" COMC calls 'em) and was searching by cheapest to check if any PC guys of mine were slumming it with the nobodies and came away with Peavy. These cards first got on my radar when I snagged a Madison Bumgarner RC cheap at a card show and it turned out to be one for the ol' "my savviest card show acquisitions" list. 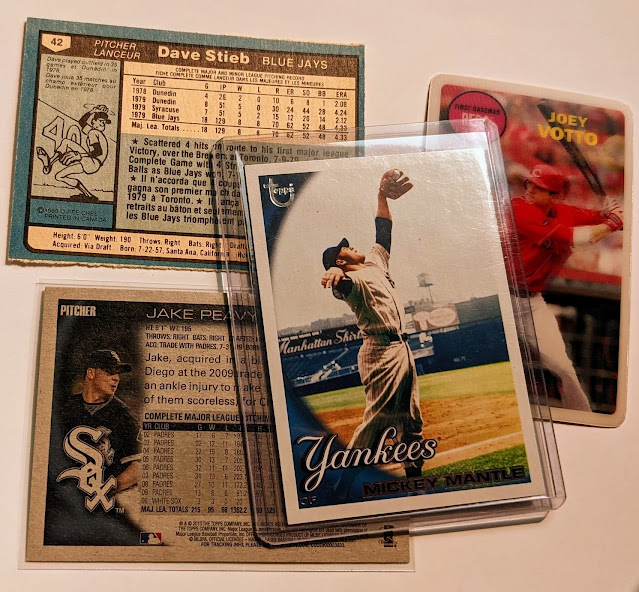 I also grabbed the similar Mantle off eBay a few months ago for a few bucks. They're not serial numbered, but the print run was likely around 100-200 per card.
Excuse the orange hue on the above photo-- it's wildfire season and it's bad out today. :(
Most of the other pics in this post were taken yesterday. 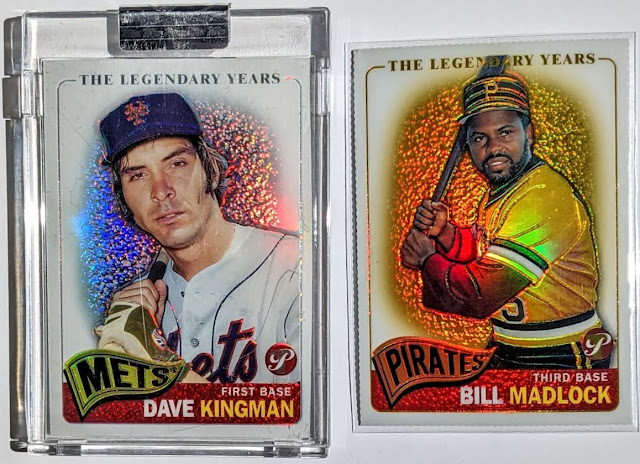 I really like the Legendary Years design's take on 1965 Topps (as well as the College Years harkening back to 1982) from 2005 Pristine.. especially the refractor parallels. Topps recently brought Pristine back from the dead and my first new-school Pristine card is currently en route from an eBay seller so maybe I'll have thoughts to share later.
Anyways, the Madlock was the card that kicked off this order, pulling the trigger on it back in April. It's a gold "die-cut" (bumpy edges, on purpose unlike the OPC Stieb) numbered out of 65, while the encased Kong is a base refractor out of 549. I don't go after his cards too hard, but couldn't pass it up for just a couple bucks, a deal you wouldn't be likely to find on eBay considering the hard case means you're looking at ~$4 in postage alone. 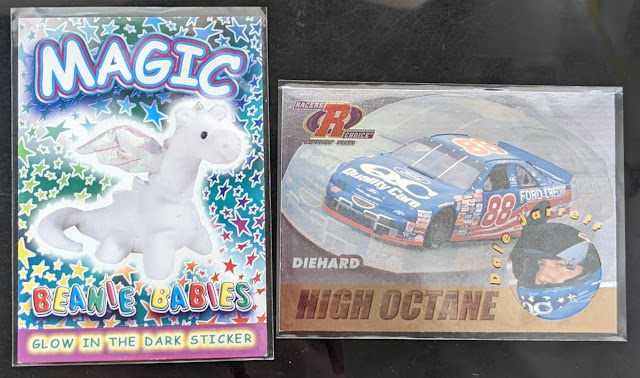 Let's wrap up the post with a couple cards that might not seem like a fit for my collection at first glance.
But flip the lightswitch.. 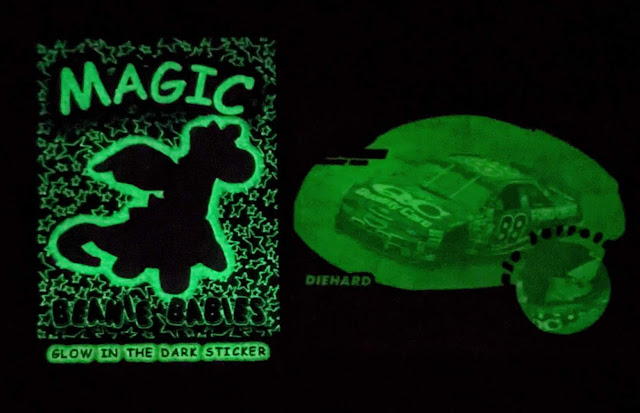 Yep, I love me some glow-in-the-dark magic, and a couple such cards found their way into the COMC shipment. Dale Jarrett must be a "common" in the racing world, because it's rare to find these glowing 1997 Pinnacle Racers Choice cards for less than $5-10 (and he only ran me $1.55). There are a bunch out there (different drivers and different sponsor parallels), but this is only my 2nd example. As for the Beanie Baby sticker.. Like the racing cards, there are many still out there I wouldn't mind eventually tracking down for the GITD side-collection, but unlike the racing cards, they tend to be cheap.

So yeah, there are some COMC pickups of mine. I'll likely get another post or two out of the rest of the shipment soon. Thanks for stopping by.

Email ThisBlogThis!Share to TwitterShare to FacebookShare to Pinterest
Labels: COMC