Not your average trade

Special trade to cover today. Dan, a guy I've dealt with over email a few times over the years-- originally sold him a Willie Mays auto for an offer too generous for me to decline-- recently reached out to chat and turns out he recently moved up to my neck of the woods. We hammered out a pretty big trade by my standards-- heck, I'd go as far as to classify it as a "supertrade"-- and conveniently were able to meet up for an in-person exchange the other weekend.

I've done a handful of real-world swaps in the past, but those were mostly brief interactions. Dan and I and our respective wives meet up at a brewpub around the midway point between our houses (just a 10 minute drive or so) and had lunch and a couple beers together. It was an enjoyable time all around and I loved chatting about card collecting topics, especially our similar niche focus that gives us a special cardboard kinship 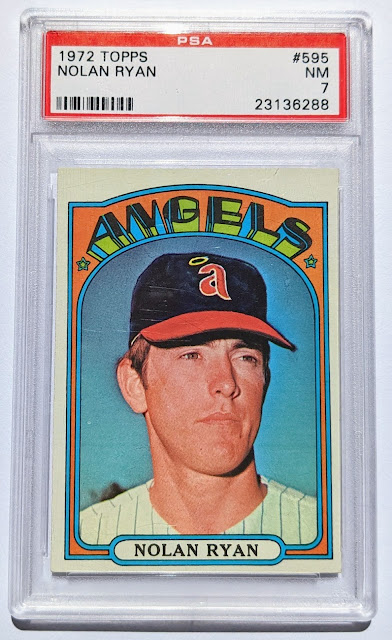 Negotiations took time, but when Dan tempted me with a 1972 Nolan Ryan, I knew we'd have a deal finalized pretty quick. Turns out he was dipping into his own PC (He's impressively got a career run of Ryans in PSA 7 or higher) and then would just go find himself another '72 Ryan to replace the one going to me. Now that's a trader who means business! As a standard headshot, it's not one of Nolan's better looking cards (dig that short-lived Angels logo, though), but as an early card of his, and a semi-high number, it's a tough one. While I've still got a long way to go in my journey to collect all the psychedelic tombstones, feels like this acquisition has lightened my load considerably. My '72 setbuild generally isn't in great condition and so this NM slab might not exactly fit right in, but hey, now I can say I've got a PSA 7 Nolan Ryan in my 1972 Topps setbuild. Nuff said! 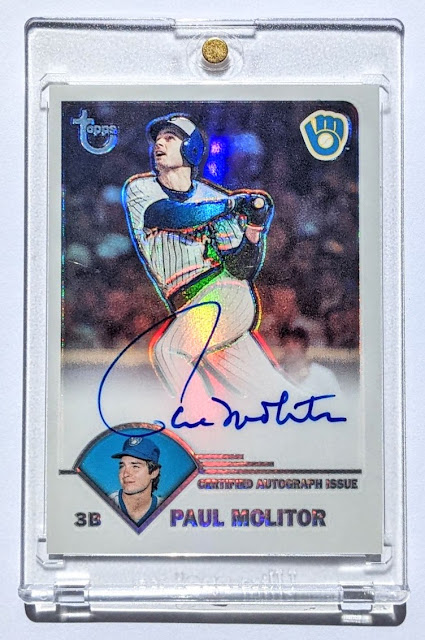 I had to give up a dandy of a 2003 Retired refractor auto (Marichal), but got back Paul Molitor in addition to the slabbed Ryan. I can live with that! 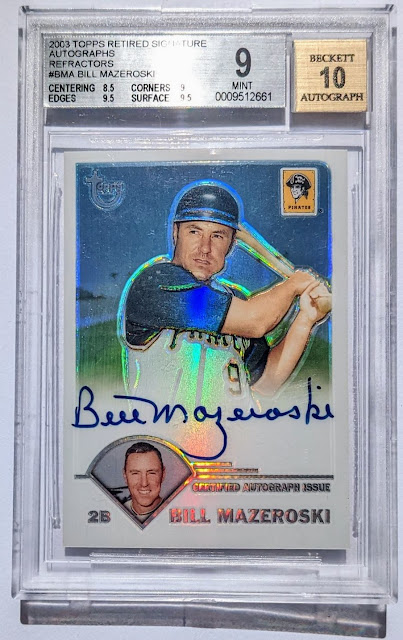 This marvelous Maz wasn't technically part of the trade, but rather a separate purchase from Dan. See, he's a big-time 2003 Topps Retired refractor collector, a kindred spirit to me, though my focus is 2004 of the same cards (also now dabbling in '03 and '05 since my '04 chase has stalled waiting for a Trammell to surface). As fellow Topps Retired aficionados, we had lots to chat about, such as the fabled 2003 Retired Kirby Puckett autograph that Dan and I are in agreement has never hit the market despite being listed on most checklists online. 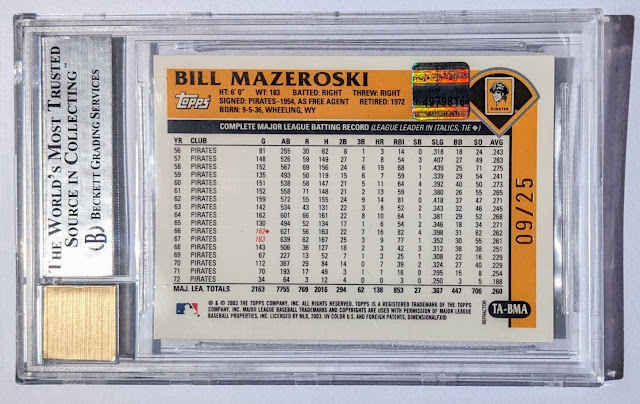 But yeah, Dan is a big 2003 Retired collector, down to the last dozen or so needs (Note that the '03 auto set is 119 cards-- much larger than 2004's meger 76-- making his progress even more impressive.) He had a couple different Mazerfractors available, one that was graded Beckett 9.5 and another just 9 but was the "jersey number ebay 1/1". Since I generally don't worry much about grades, I eventually decided on the 9/25. There's a lot of number nine synergy going on, not just the serial numbering, but it's also graded 9 and the jersey 9 is visible in the front photo. So that's kinda cool. Nice to knock another HOFer Retired Refractor off my list (I don't expect to ever complete the '03 refractor set like Dan is working on, but I can't help snagging them if the price is right. I could possibly complete the auto set in my lifetime, but as a combination of base and refractors, currently 82/119 there). 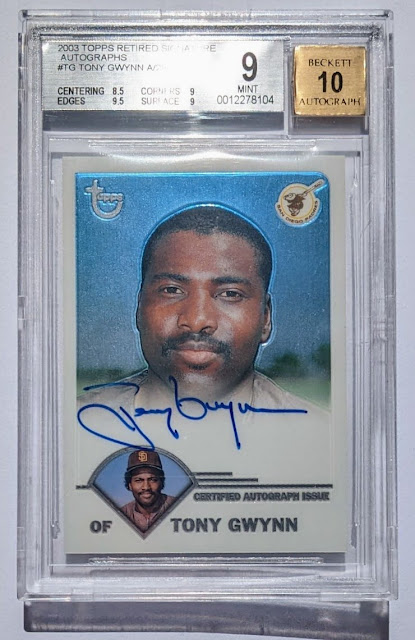 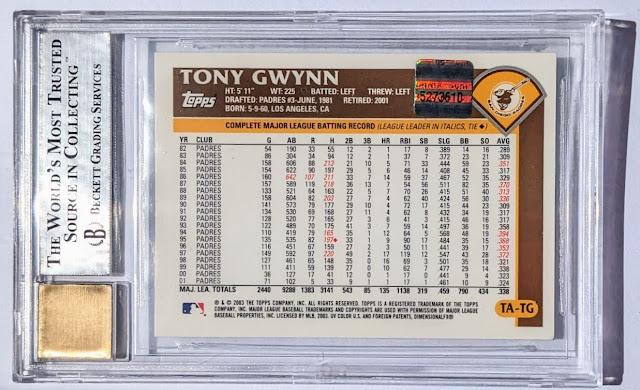 While Dan and I are collecting buds, we're also rivals when Retired refractors we both need pop up on eBay. Case in point, a few years back a seller listed the '03 Retired Gwynn 12/25 refractor, and also a similar Jim Bunning. The cards were each listed at a silly high buy-it-now asking price but with Best Offer option. I put in strong offers on both... my offer was accepted on the Bunning but I missed out on the Gwynn. I was kicking myself over this and in hindsight would have went higher on the Gwynn Christmas Card. Turns out it was Dan who bested my offer, that son of a gun! Oh well, all's fair in love and cardboard. At least he's cool and said we could work something out if he should ever end up with another Gwynn refractor (The 12/25 only graded out to an 8.5, so he wouldn't mind upgrading there anyways. Me, I vastly prefer my Retired autos in the original Topps "uncirculated" cases. In the past I've jailbroken slabbed Retired autos just to return to the regular casing, though am less gung-ho about that stuff these days.) But yeah, seeing as Tony is my top PC, very happy to score his 2003 Retired auto. Funny enough, the base version is just as scare as the refractor, both having a print run of just 25 copies (though the base isn't serial numbered).

Anyways, thanks a lot, Dan! Had a great time and came home with some great cards. Hope we get the chance to hang out again before too long. Best of luck in your quest to hunt down the last few cards you need.

That's probably plenty for one post, but I gotta clear out some backlog-- just received a COMC order!-- so here are a couple more quick trades for the post. 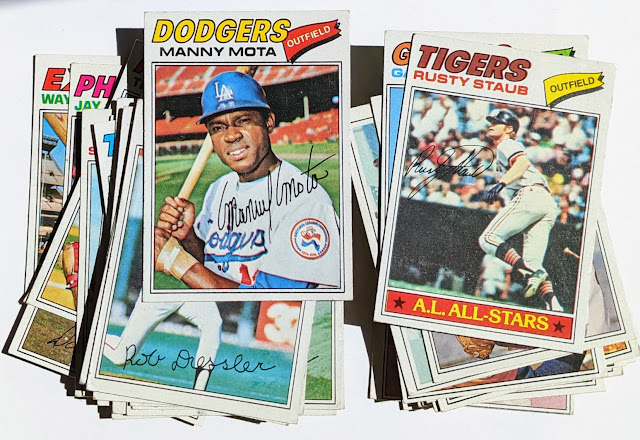 Traded with a reader named Sigler who helped me make solid progress with my 1977 Topps setbuild. We've already got a second swap in the works. Thanks, man!

Last one is another new trading partner, Crocodile from a blog I just recently started following called Crocodile Sports Cards. He had posted about some glow-in-the-dark cards he wound up with that he didn't particularly care about. A thing about me is that I want all glowing cards, even if I already have them, but I needed most of these. 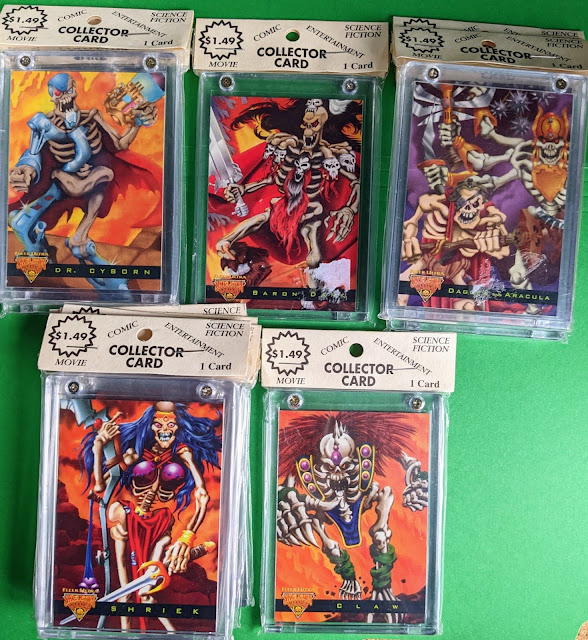 I never watched the 90s cartoon Skeleton Warriors, but now I've got the complete 5-card glow-in-the-dark insert set. I only had one of them before. Now I've got a set and several dupes (As I say, when it comes to glowing cards, I want dupes too.) These cards glow on the back, and I'm not convinced that wasn't the result of a printing mistake at the factory. 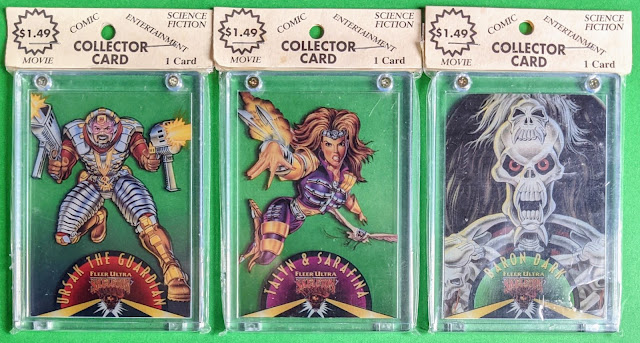 He asked if I wanted the acetate inserts too. Sure, why not. Neat stuff. 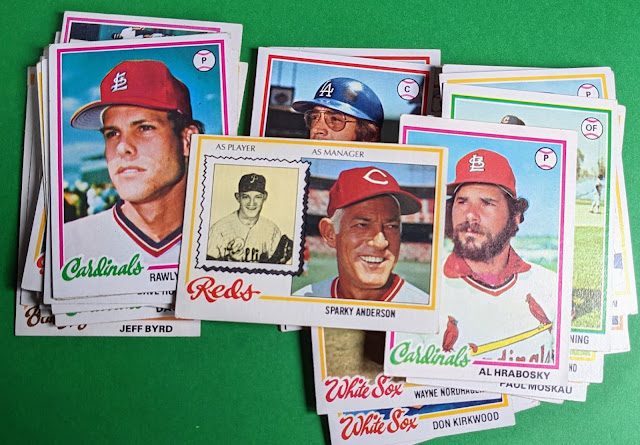 While I was excited to get the glowing cards, it's hard to beat a clean stack of needs and upgrades for my 1978 Topps setbuild. In the next couple years I should have a run of 70s Topps flagship filling out nicely.

On top of that, Crocodile was kind enough to hook me up with a stack of 1987 Topps for another of my hairbrained plans that might not ever really go anywhere. Even got an OPC Yount out of the deal!
But what's embarrassing for me is I had sent him a PWE with nothing all that impressive and he sent back a heavy box. Not a good first impression on my part with a new trading partner. In my defense I didn't realize those Skeleton Warriors cards were all in heavy plastic cases. I'll be sure to put some effort into balancing the scales once we get around to our second trade (assuming I haven't scared him off).

Ok, that'll do it for today. Hope you're having a Happy Labor Day, everybody. My COMC order showing up today was a pleasant surprise, being a federal holiday and all. Some good stuff in there I'll plan to show off on the blog over the next few posts. Stay tuned.