Some incoming cards to check-in 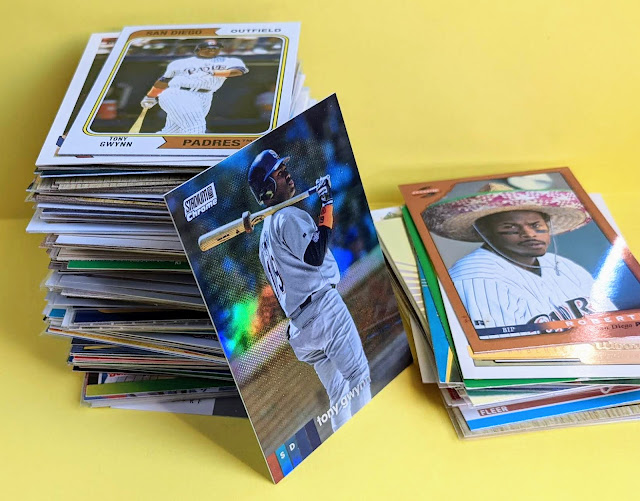 Rod from the Padrographs blog swung by my house recently with a box of 600 or so cards; Crapton of Padres, as Rod continues tightening up his collection. Several notable Pads were included with multiple cards, though Tony Gwynn was the most plentiful (that whole stack on the left; stack of Bips on the right). When I check this lot against my PC I expect that it'll have a couple dozen or so needs for me and a bunch of overproduction era stuff to add to my Gwynn dupes. I ironically had just a few days earlier sorted all my Gwynn dupes (mostly acquired in previous boxes from Rod). I'm not going "Tim Wallach guy" here trying to accumulate as many as I can, but I don't mind it. They occasionally come in handy for trading, plus it's a deep well for me to turn to when I need to pick a new annual wallet card... or when I get the urge to play Mad Scientist and "experiment" on cards as I'm prone to do from time to time. But yeah, if anybody wants a hand beefing up a fledgeling Mr. Padre PC, I have lots available. 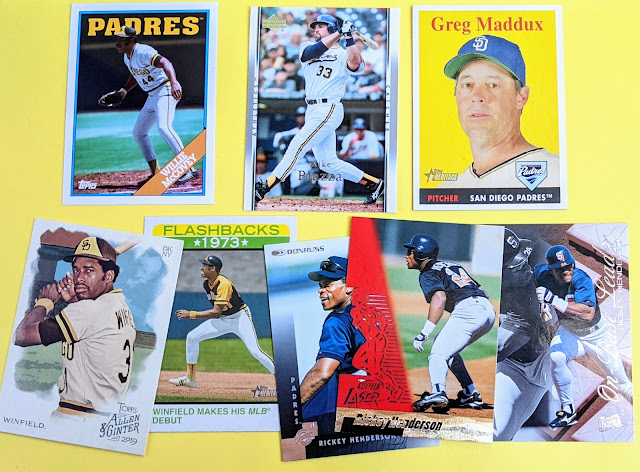 A few big names scattered among the lesser-known Padres of the past.

There were some cool original customs in the box, including a 12-card "My Music" set featuring some of Rod's favorite musical acts in a take-off of the 1991 MusiCards design. I remember him posting these on his blog back in 2019/2020 and I'm happy to add physical copies to my "music cards" subcollection. Maybe I'll take a closer look at each card on my 1991 MusiCards Blog one day. Our musical tastes aren't exactly aligned, but we've got plenty of common ground. Also in the photo are a few serial-numbered cards. Glad to see Hunter Renfroe (gold paper /50) is having a good year with the Brewers and recently hit his 150th career homer. Seems the window of time I was most active with modern cards was when he was a chosen rookie-- you know, that phenomenon when Topps goes all-in on a rookie or two from each team and floods the market-- so I've got a ton of his cards despite not really chasing them. 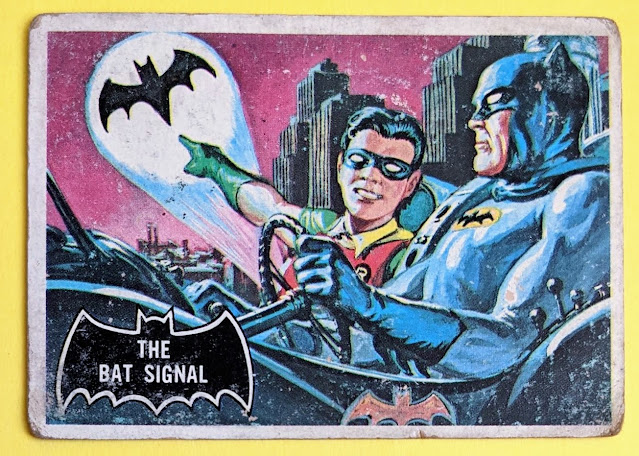 Now here's a card that wasn't like the others in the box-- vintage Batman! I always dig these when I've seen them on the blogs over the years, so it's cool to have one in-hand. It's now by far the oldest card in my little stash of comic book cards.
Oh, and Rod also hooked me up with a full base set of 2012 Panini Beach Boys and nearly all the inserts. And I already had most of that stuff, so if anyone is wanting to add some Beach Boys cards to their collection, I've got plenty I'm happy to spread around. Now I'm really just missing a few of the Gold Album inserts (must've been SP'd) and the really sparse chase cards, ie autos and relics (I've got a few relics but no autos).
Big thanks as always, Rod!
---o 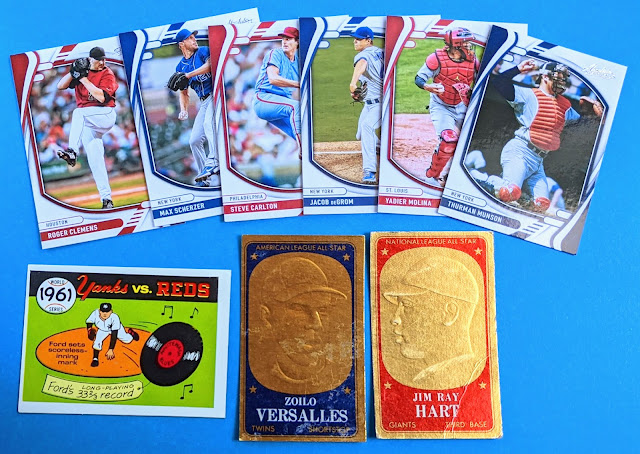 Here's my prize from one of the daily contest at Johnny's Trading Spot. While not tailored to my specific wants, as far as I can figure, most of this stuff fits into my collection. I have little PCs going for most of the players on the Panini cards, and love accumulating those Laughlin WS cards. Really only the '65 death mask cards are misses for me here. I was hoping the numbers would be vacant in my Vintage Frankenset so I could find a use for 'em, but nope, and no way they are besting the current placeholders (I've mentioned on the blog before that I kinda hate these things, honestly, lol).
Thanks, John!
---o
Bob at the Best Bubble hooked me up with a bunch of good cards the other day. 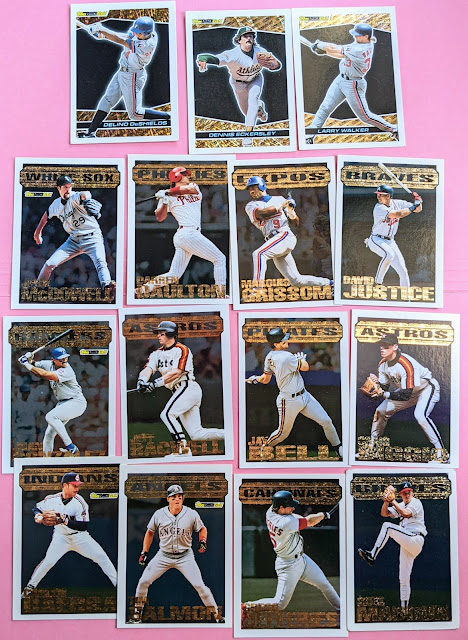 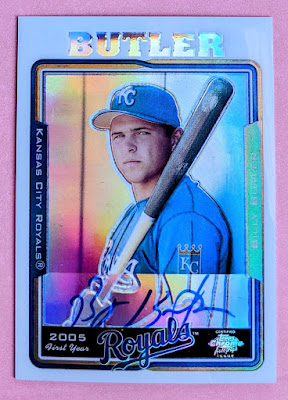 Billy Butler 2005 Topps Chrome refractor auto.. nice! New center-pocket card for the 9-card PC. I've got a lot of 2005 Topps Retired refractor autos in this design, but I think this is my first 2005 Topps Active ref auto. 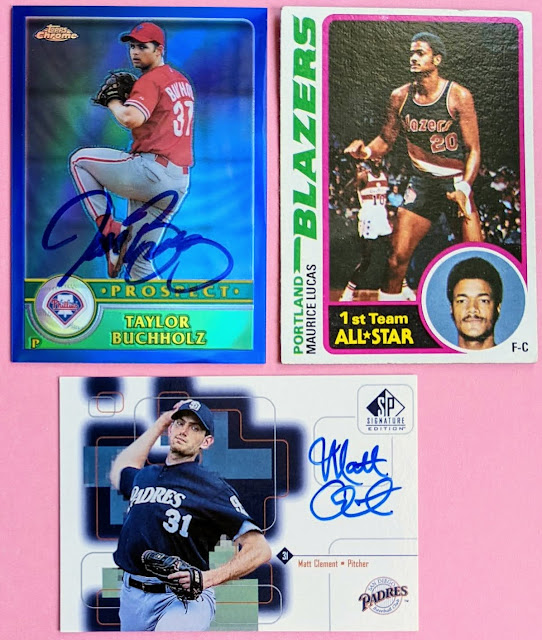 A couple more autos and a vintage Blazer. 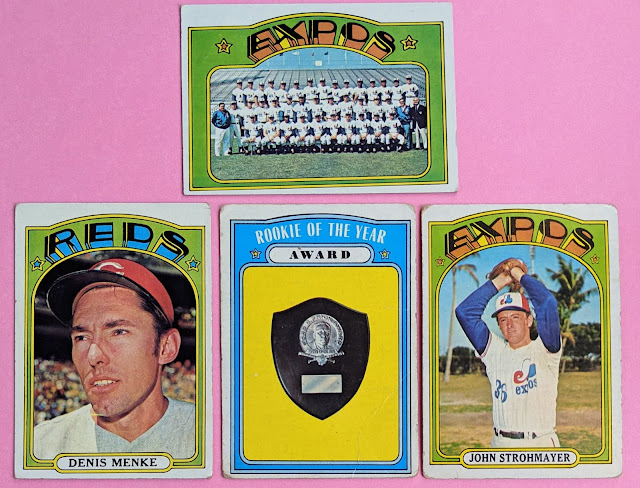 1972 Topps needs!! YES! Yes, yes, yes. Seventy-two is still a top priority of mine, even if I'm pretty much giving up on completing it by the end of the year as I was originally aiming for. 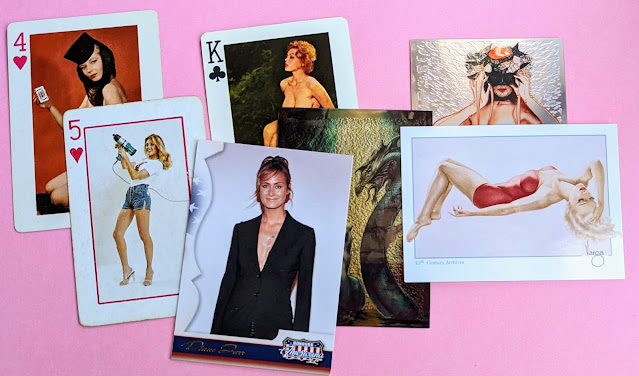 A few ladies (and a dragon). 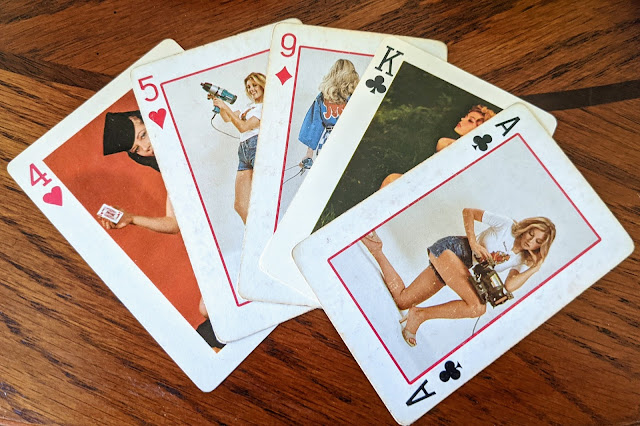 I now have 5 girlie playing cards total (from 3 different sets). I fold.

Thanks, Bob! I wish there was more meat on your wantlist, as it's always tough finding stuff to send back (and so I usually just stress over it for a while before making some more gum customs, but still haven't gotten the new printer set up yet. So it might be a while.)

Here's a package from Night Owl. 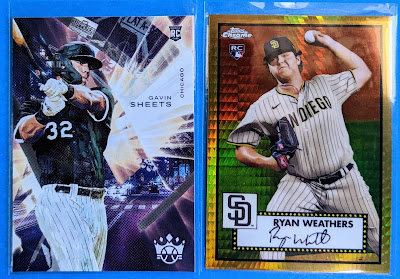 He recently ripped some of that 2021 Chrome Anniversary stuff and I offered to help him get that shiny Padre out of his house. (He also inspired me to pick up a parallel of the Gwynn from that set, which I should show off sometime.) Cool Gavin RC too, but the real highlight... 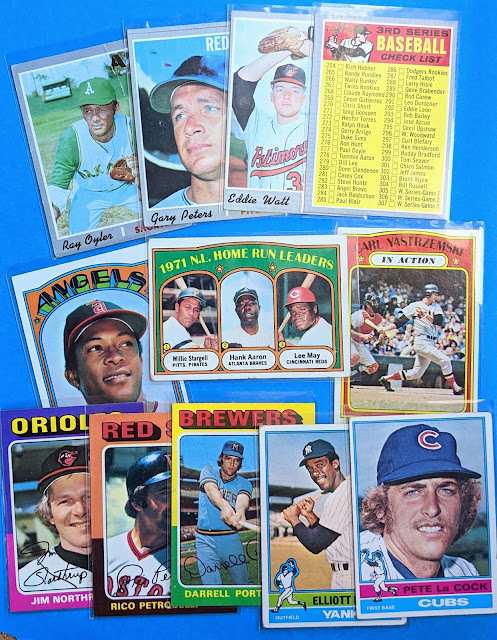 Thank you, Night Owl. Much appreciated. I mailed out a return to you earlier this week.

I've got more incoming trades to cover, but this post is taking too long-- Is it possible to get the "blogging yips"?--  so I'll have to get to the rest later, sorry.

Thanks for stopping by!