Catching up with the late Dick Allen

When I was a kid, I got Dick Allen to autograph a baseball for me at the 1992 All-Star FanFest. I didn't own any of his cards or really know who he was, but I just knew he was a badass old ballplayer there to sign autographs, so why not.

I could count the number of in-person autographs I got as a kid on one hand, so I guess I'm a little sentimental about those interactions and when I returned to the hobby as an adult, Mr. Allen became one of my favorite before-my-time guys to collect.

I've built up a solid Dick Allen PC that's among the best logged at TCDB (ranked 2nd at last check), and have picked up a few old oddballs and unique items from the Topps Vault. I'd stop short at calling myself a supercollector because I'm not going to go nuts on big-money items. I'm sure there's plenty of obscure old stuff out there that I don't even bother looking for. And then there's modern cards with all the many parallels that a true supercollector would be compelled to rainbow.

So I like to think of myself as a semi-supercollector when it comes to Dick Allen. I don't try to get everything, but I'll round up a good sampling of what's out there. And this post will take a look at some recent pickups.

Dick Allen sadly passed away December 2020 at age 78. He remained a popular sports chat topic in 2021 as his Hall of Fame candidacy came up again. Unfortunately his posthumous run for the hall ended like his previous attempt, falling a single vote short of induction. Ouch. But oh well, I'll still keep on collecting him and have less competition than I would have had he gotten the "HOF" label applied to his legacy.

On the cardboard front, Topps basically ignored Dick Allen for over 15 years before finally giving him some love in 2021, showing up on a few checklists among the other stars of the past. While I'm chagrined Topps waited until Dick was no longer with us to start giving him modern cards again, at least there aren't a ton of certified autographs for me to track down and spend money on, to try to look on the bright side about it.

But yeah, I had been clamoring for years for Topps to put Dick in sets like Archives and Ginter, and it sucks that they wait till he dies to include him. Chances are he signed a new contract with Topps in 2020, possibly even got sent a box of cards to autograph and return for inclusion in 2021 products but his failing health scuttled those plans. Who knows? 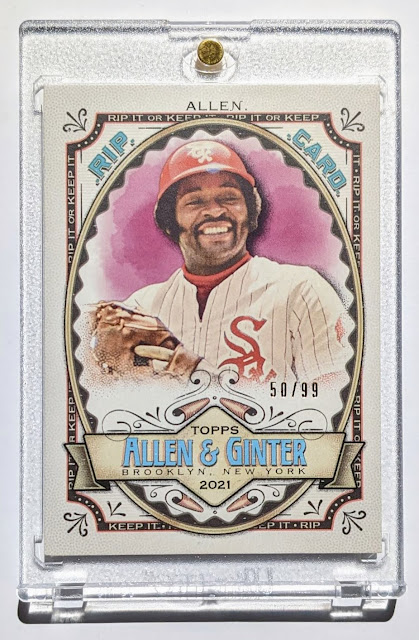 Took me a while of searching, but finally added a rip card. I believe it's my first ever real rip card-- some of my trader buds might recall a holiday surprise a few years back when I made my own rip cards to share using 1987 Topps Tony Gwynn cards with a custom magnet card hiding in the middle. There had been a couple already-ripped rip cards for sale, but took a while for me to find one intact, despite being numbered to 99 which isn't all that low by today's standards. I don't want to rip it, but maybe someday I'll find another one and then I'd rip the dupe.
Dick's also featured in the main 2021 Allen & Ginter checklist, though I haven't bothered chasing all the parallels of that one, only owning the base card so far. It features a similar photo to the rip card, but no visible glove and he isn't smiling.. kinda boring, honestly. 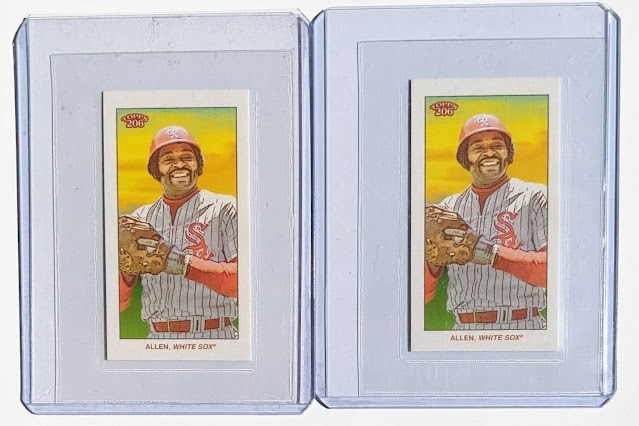 Here's that same smiling photo from the rip card, but made up in a pre-war style for a line of 206 cards put out in overpriced, online-only waves. Of course Topps is gonna throw in a bunch of scarce, unnecessary parallels into the mix too. They're just dumb back variations, though. 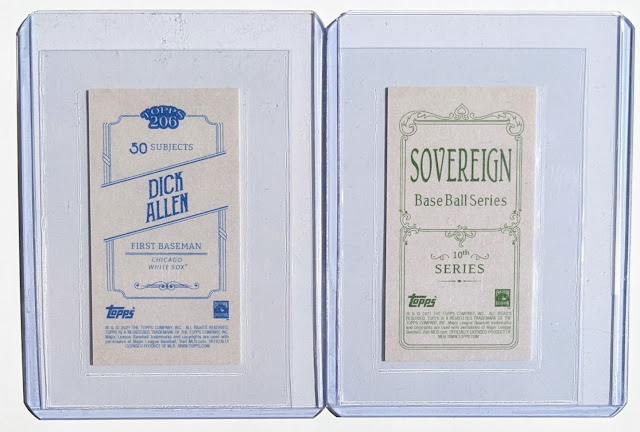 I grabbed the base and the Sovereign variation, whatever that's supposed to mean (tobacco company?). There are 6 more backs according to TCDB and I threw them in my wantlist there in case a prospective trade partner might have one available, but I don't plan to put much more effort than that into landing additional 206 Dicks. But yeah, it's a nice enough card at its core. 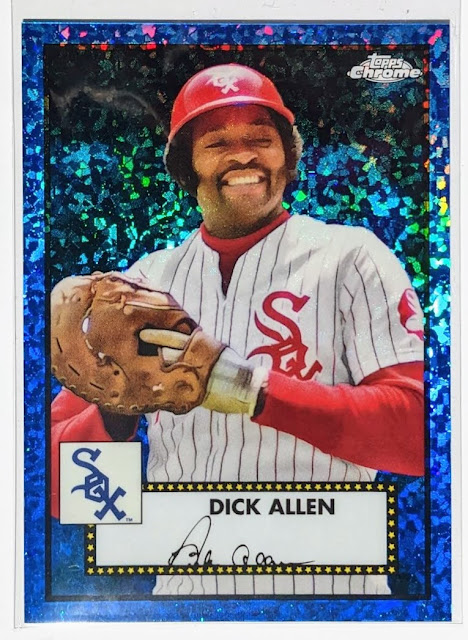 We've seen this photo in the Ginter style and tobacco mini style, and now here's a sparkly 1952 Topps style card using it. Geez, Topps.. It's a nice photo, but howbout giving another look to the many other available options? This 2021 Topps Chrome Platinum Anniversary product has some things going for it, such as a solid vintage-meets-modern look and a deep checklist with some interesting players, and it's gotten a positive response from collectors, best I can tell. I broke my vow of not doing anymore (non-blogger) group breaks and won a couple D.A. slots on eBay for multi-case player breaks. But unfortunately it's a big checklist and not a lot of cards per unit.. and welp, I got the shaft. Oof. Yep, several boxes of the stuff was busted on my behalf and I didn't even end up with one lousy base card of my guy, much less a nice parallel.
But yeah, sticking to buying singles, I picked up this parallel. 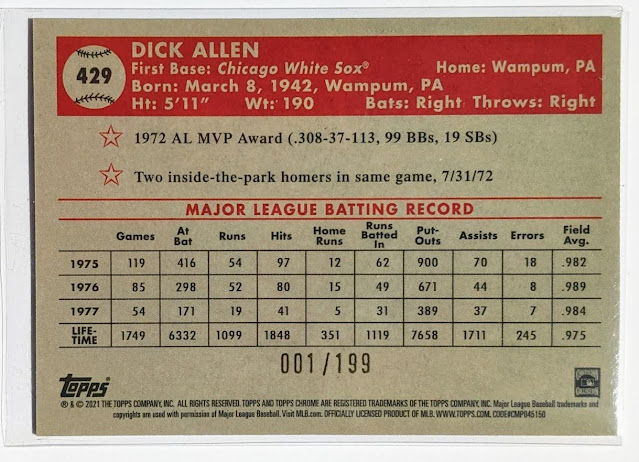 First off the line!
I should also give an update on Dick's 2021 Topps Archives rainbow that I spent some time and money chasing in the months after that product's release. 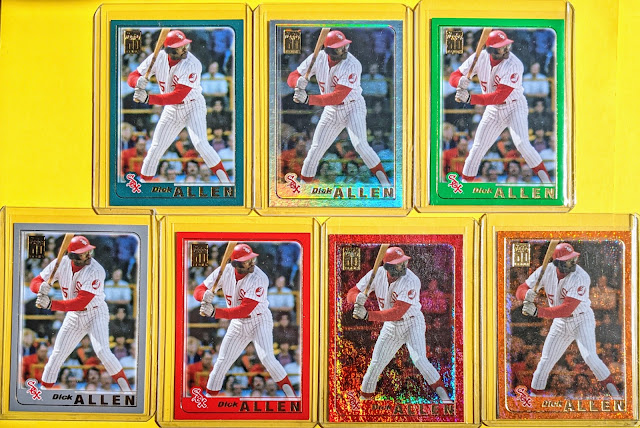 I'd like to eventually pick up a Blue Foil parallel-- preferably the christmas card-- but other than that I don't plan to sweat the 1/1s and dumb 70 Years variations, so this rainbow isn't likely to ever reach its pot of gold. But I'd say that's a fine looking run of cards above that I'm happy to have in the PC.

While drafting this post, I learned Dick's in 2022 Topps Pristine, too. Gotta say I hadn't expected Topps to continue putting him in their new products, not after the epic HOF diss, so that's cool. 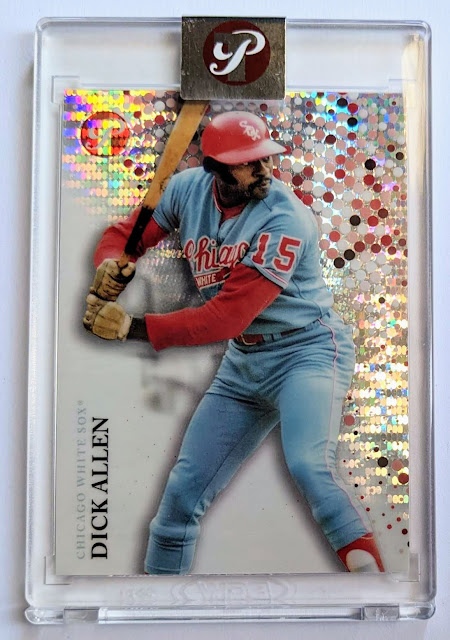 I just scored this encased refractor for $1.50 plus shipping. Kind of disappointing Topps picked such a similar shot to the Archives photo, but at least now Dick's in the road uni. I might try picking up a parallel or two, but don't plan to hit the rainbow hard this time out. 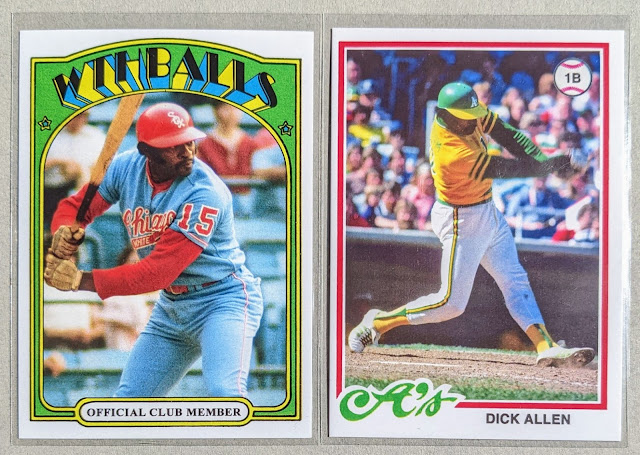 Looks like the same photo from Pristine had been used in a WTHBalls custom not long before. This was a cool little "club member" bonus throw-in. As a custom card maker, a nemesis of mine is the top font of 1972 Topps. I've never been able to replicate it like Gio has here. So while I'm ok at making customs overall, seasoned pros like Gio are on a whole 'nother level.

And I had never gotten around to making my own custom from Allen's time in Oakland (despite longing for such a card), so I was very pleased to see that '78 that-should've-been enter the physical realm in a recent WTHB release. Authentically off-center, lol.

That wraps up the update to my Dick Allen semi-supercollection. My interest in today's cards continues to dwindle, but as long as he keeps getting new cards, I'll at least try to sprinkle some examples in the ol' PC. Thanks for stopping by.