Today we're breaking down baseball cards that glow in the dark. Fun, right?!

This post has a lot of large photos, so if you're on a slow connection, it make take a moment to load, sorry. Also, this post has a soundtrack option for those who would enjoy an apt song to accompany your reading experience. I recommend either of the following:
1. If you want something rockin'...

2. Or if you're in the mood for something a bit more soulfully subdued...

I admit it: I love  glow-in-the-dark  things! I loved them when I was a kid, and still love 'em to this day. It blows me away that stuff can light up with no electricity. So cool! Looking around my place, I've got a glow-in-the-dark dog toy rubber ball, a couple old "glow worm" Happy Meal toys from the 80s, and a few other various glowing things. I live in a basement apartment (no, not in my parents' house, thank you very much). But yeah, it gets very dark in here with the lights out at night. So some strategically-placed glowing items help guide me to the bed without walking into a wall or whatnot. I even talked my girl into getting a glow-in-the-dark case for her iPhone since she misplaces it often, and the glowing helps.

When I was a kid, I remember having a comic book, I think it was Shadow Hawk #2 (...googles it).. no, it was Shadowhawk #3. The cover glew (sic) in the dark and it was awesome. I remember that cover well, though I couldn't tell you anything else about whoever Shadowhalk was. I assume some sort of Birdman character who tended to stay out of the sun because he burned easily. But yeah, I might even still have it in the small packed-away box of comics I've kept through the years. The comic book industry seemed to do cool stuff like that before baseball cards did. Like, as far as I recall, they were doing crazy hologram, diecut, refractor stuff with their covers before sportscards got on the bandwagon (for better or worse). A lot of that gimmicky stuff I don't care much about one way or the other, but throw some glowing ink on something and you've got my interest.

For all my life, I was never aware of any glow-in-the-dark baseball cards. It was a gaping void in my soul. I had stopped collecting in '93, not really starting up again until a year or two ago. I knew there must be some glowing cards out there, since pretty much every gimmick in the book was used in the 90s. And the other day, I finally got around to researching it and found that some actually do exist!

The best of the bunch? That seems to be 2011 Topps Opening Day, which included an insert set called "Stadium Lights" (sometimes also referred to as "Under The Lights") They celebrate night games (Night Owl must love these cards, right? with his love of night game cards). I impulsively bought the 10 card set on eBay for what worked out to less than a buck per card just minutes after learning of its existence. The checklist is Joe Mauer, Troy Tulowitzki, Robinson Cano, Alex Rodriguez, Miguel Cabrera, Chase Utley, Pedro Alvarez, Adrian Gonzalez, Jason Heyward, Ryan Braun.

Here's an example of the backs (The backs don't glow): 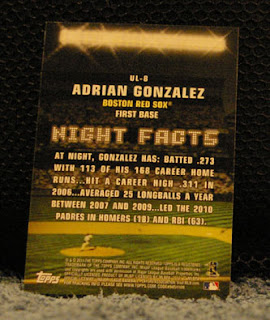 And now here's how the fronts look: (I spent a fair amount of time on these "In Action" gifs, so I hope you guys dig the super cool animation as much as I do!)

It's amazing! I'm not crazy about the player selection-- (juicers like Braun and A-Rod. No pitchers?? But some good guys, too.. though Adrian Gonzalez is the only player I semi-collect)-- But come on.. it's baseball cards that glow in the dark!! A marriage of 2 of my favorite things. Topps did a great job, with the photos actually glowing, not just a border and random shapes. I love these cards. I only wish more cards glowed in the dark. Hell, I wish all of my cards glowed in the dark.

As far as other glowing cards out there? I found some more sets and picked up a representative card from each.

1993 Upper Deck Fun Pack (a set aimed at younger kids) features "Glow Stars" stickers that are the same size as a typical card. Give UD credit for apparently being the first company to come out with glowing baseball cards (--er, stickers). They're about what you'd expect from early 90s glowing stickers.. some glowing background shapes/outlines. Not bad, but not incredible. The completely blank backs on these are a let down, but again, they're stickers. These aren't inserts, but rather a subset mixed in with the base cards. There are 28 Glow Stars (one star player for each team) included in the set of 225 total cards. Here's a link for the checklist, if you're interested. 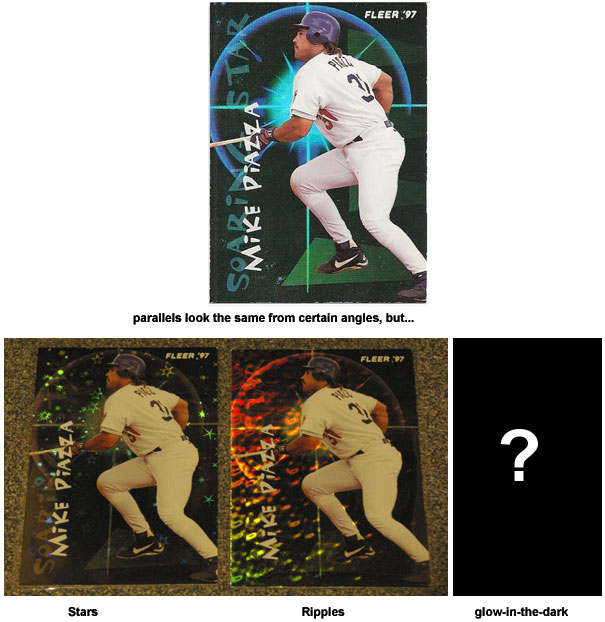 1997 Fleer has a 12-card "Soaring Star" refractor insert set that features glow-in-the-dark parallels. It's kinda tricky to distinguish the parallels because at certain angles, they look the same. Sadly, the glowing parallels are more expensive, often around $10 a pop, whereas the non-glowing ones are usually under a buck. I got a non-glowing "stars" card cheap on COMC. Then I thought I was buying what looked to be a glowing one on eBay (the seller didn't advertise it as such, but it looked like it from the photo), but it turned out to be a different non-glowing parallel. Instead of stars in the background, it has a ripply effect refractor thing going on. I guess there are at least 3 different versions of this insert. So, sorry I can't show you what the glowing parallels look like right now. If you have a glowing one of these you're willing to trade (or at least take a photo of it glowing so I can add it here), please let me know!
Anyways, the checklist for this insert set is Albert Belle, Barry Bonds, Juan Gonzalez, Ken Griffey Jr, Derek Jeter, Andruw Jones, Chipper Jones, Greg Maddux, Mark McGwire, Mike Piazza, Alex Rodriguez, Frank Thomas.

1997 Score has a 9-card "The Franchise" glowing insert set that features a thick border around a sepia headshot. The tiny, boring photos gave me low expectations for these, but as you can see from the above gif, they actually look kinda cool in the dark! Like with the '97 Fleer inserts, there are also non-glowing parallels of these and I'm not sure how they can be distinguished from the glowing cards (besides getting them in the dark), so please leave a comment if you know. The checklist for these inserts is Ken Griffey Jr, John Smoltz, Cal Ripken Jr, Chipper Jones, Mike Piazza, Albert Belle, Frank Thomas, Sammy Sosa, Roberto Alomar.

Finally, I reluctantly even mention it, but 2013 Topps MLB Chipz (a new product, like poker chips or pogs with baseball players on them) has glow-in-the-dark parallels. I've got very little interest in these. The "chip" thing just doesn't do it for me. And the glowing is underwhelming (the backs look cooler than the fronts). Still, though, I'm a sucker for glow-in-the-dark things so I had to buy one. These glowing parallels are distinguished by a matte finish, whereas the base chips are very glossy.. not really something you can tell from a typical photo/scan. The other cool parallels in this set are magnetic chips. What would have made this set redeeming in my eyes would be if all the chips were both magnetic and glew in the dark. That would make them great for sticking on your fridge, locker, medicine cabinet or whatever. But instead, no, a small number of them glow, and a small number of them are magnetic, but most are just nothing and none are both. Boo. There are 100 players in the base set, with each having a glowing parallel. Full checklist link here.


Ok, that's it. Do you know of any other  glow-in-the-dark  baseball cards out there besides these 5 sets/inserts? If so, please let me know in the comments!
And no, the 2013 Topps Archives  day glow  parallels don't count. There are also glow-in-the-dark cards for stuff like Garbage Pail Kids and Spider-Man, but for the scope of this post, let's keep it focused on baseball.

I wouldn't mind further building my glow-in-the-dark baseball card collection. Got any glowing cards [or... sigh.. "chipz"...] besides those pictured here that you're willing to trade? Let me know!

...I'm also curious about scratch-n-sniff baseball cards.. but that could be dangerous. LOL

Oh, and just a reminder that I'm currently running my 1st contest here at BCB, so check it out and enter if you want. Thanks.
UPDATE 3/31/14: Another glowing card has been uncovered, this one from 1994 Classic/Best. Check out the post here.
Posted by defgav at 7:44 AM